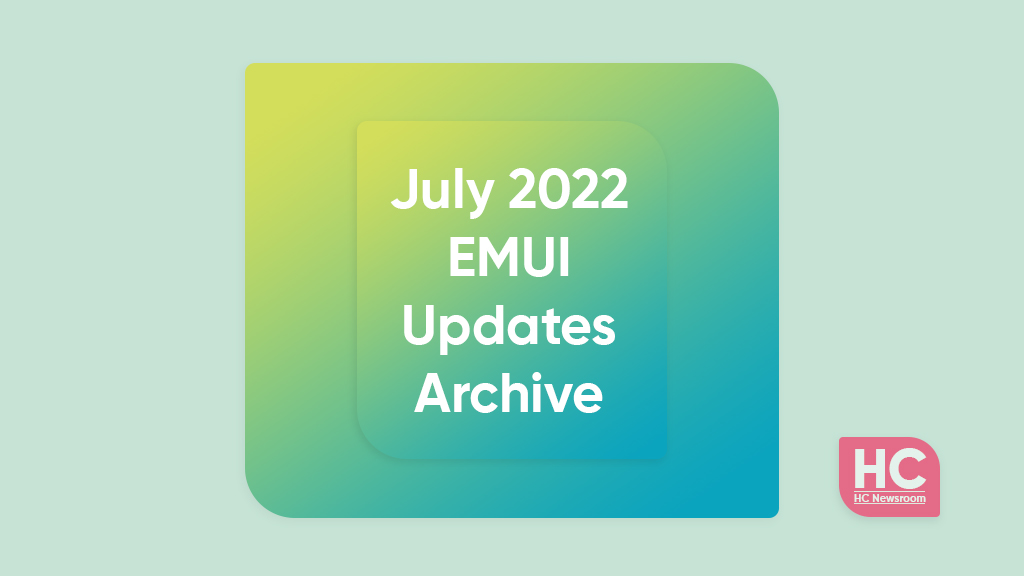 As we entered July 2022, Huawei keeps on sending old and new EMUI updates for different models, these aims to improve the overall security and install new optimizations to smooth up the corresponding models.

On the other hand, the expansion of EMUI 12 is still underway, with flagship devices already aiming for the next major upgrade, we’re heading towards EMUI 12 release for devices such as Huawei Y9 Prime and Nova 4 in the global market. Also, there are more devices that will soon open for the upgrade with EMUI 12 software update.

Aside from these, Huawei has still not published the July 2022 security update bulletin and some of the devices are getting June 2022 security patches. However, all we can do is wait for the next rollout to initiate and bring us some new information on the upcoming firmware expansions.

Meanwhile, you can keep your eye on the System settings to get the latest software update for your Huawei device by visiting System & updates, then Software updates and follow the on-screen instructions to get the new firmware version on your smartphone or tablet.

Moving on, you can check all of the Huawei EMUI software updates from July 2022 in the archive below.

Huawei has twisted itself to another flagship model for serving the latest July 2022 security patch. Yes, we are talking about the P50 Pro smartphone that is receiving a new July 2022 EMUI security update. Read More

Huawei is rolling out a new software update for Nova 5T smartphone that comes with July 2022 security patch.

Huawei has started distributing the July 2022 EMUI security update to its flagship model – Huawei Mate 40 Pro smartphones. The update is running live in the global market with version 12.0.0.260.

Huawei began seeding EMUI 12 for the P30 Lite smartphone in the global market, which contains a big changelog. [Features]

Huawei has started sending a new and the most awaited software update – EMUI 12 for Huawei P30 Lite New Edition smartphone in the global market. [Features]

The stable EMUI 12 software update is landing on the Huawei P20 smartphone series. The update packs a bunch of new features and optimizations for the device. [Changelog]

Huawei has started delivering stable EMUI 12 for the Huawei P30 Lite users in the global market. The rollout is coming after three months of beta testing and arriving with version 12.0.0.225.

We are in the mid-week of July, and Huawei has started sending the July 2022 security update for the Mate 30 Pro smartphones. Read More

Huawei is bringing the July 2022 security patch for the P40 Pro smartphone users in the Middle East. The update is arriving with EMUI build 12.0.0.262 and package size 275MB.

Huawei has begun expanding the huge EMUI 12 development for the P Smart 2019 smartphone users in Europe. The update is carrying version number 12.0.0.225 and a package size of 3.08 GB.

Huawei Mate 20 Lite is one of the most essential budget devices sold in the global market and recently, Huawei has started expanding EMUI 12 update for this phone in Europe.

Following the P Smart Pro, the Chinese tech giant has started rolling the EMUI 12 software for the 2019 edition of P Smart device consumers in the global market.

After three months of long awaiting, finally, Huawei P Smart Pro smartphone users are getting the major EMUI 12 update in a stable form.

A stable EMUI 12 software update is now rolling out for the Mate 20 Lite smartphone users. The update arrives with EMUI version 12.0.0.226 in the global market.

Huawei Mate 10 Pro smartphone users are receiving the major EMUI 12 software update in Europe. The update adds numerous implements to the user interface and the security system of the device. [Features]

Huawei EMUI 12 is now rolling out for Nova 4 smartphone, with this installation, Huawei also aims to renovate this good old mid-range smartphone with lots of new features offered by the EMUI version.

Huawei Nova 9 is expanding the firmware version 12.0.1.242 in Europe that comes with a variety of new system improvements and the installment of the May 2022 security patch.

Huawei Enjoy 20 SE is continuously getting new optimizations in China and recently, Huawei has started pushing EMUI 10.1.1.175 for this smartphone with July 2022 optimizations to improve its performance.

Wow, Huawei Mate 10 series users can now install EMUI 12 under the stable channel, this news has brought in the joy that the Mate 10 model owners have been waiting for. Read More

Huawei P40 Lite E gets a June 2022 security update with EMUI version 10.1.0.258 and improves the system security with the latest patches.

Note – This article will be updated continuously. 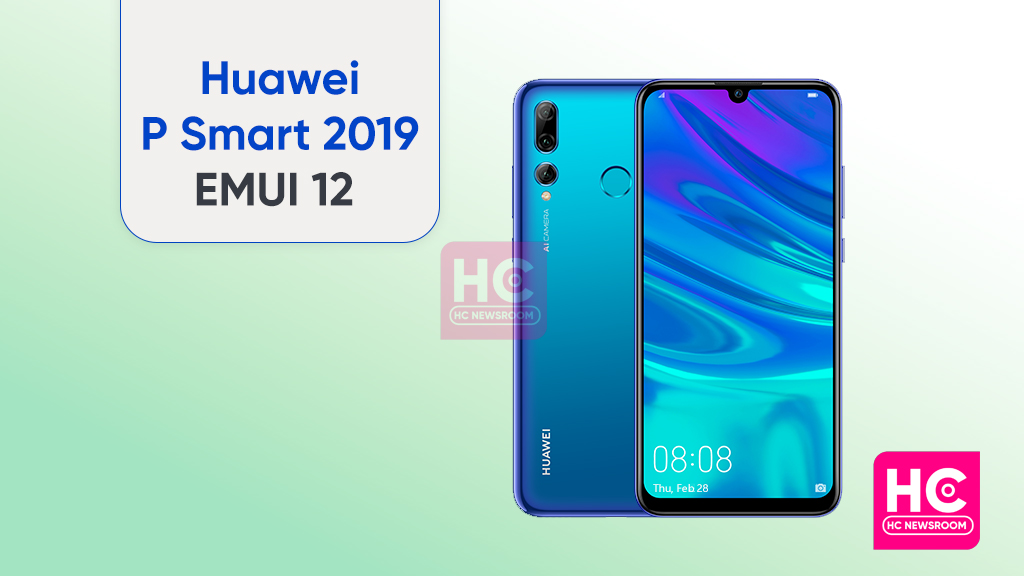 Huawei P Smart 2019 is one of the models whose names indicate the year of manufacture and the consumers still adore the smartphone after four years, thanks to Huawei’s attention to detail and regular software updates. In the meantime, Huawei is extending the EMUI 12 version to more Huawei P Smart 2019 users.

Your smartphone will run faster and be operable with only one tap after updating over the EMUI 12 update. Along with features that give you a better user experience, you also notice a number of new enhancements.

However, Huawei P Smart 2019 users can identify this update through the EMUI 12.0.0.224 (C316E3R1P1) build version. Just grab this EMUI update as soon as it reaches you to boost the working of your smartphone.

Moving to the changelog description for the EMUI 12:

Alongside, the Multi Window allows you to exchange messages in a floating window while viewing videos or playing games, making it simple to multitask. To display the multi-window dock, swipe in from the left or right side of the screen and hold the screen.

The EMUI 12 for the Huawei P Smart 2019 let it supports more flexible font customization where you can adjust font size and width with a slider. Not only this, the Neuromorphic theme, Smart folders, Huawei Share, and the Mee time features are also intended to give you a better user experience.

This EMUI 12 feature will let you add the Mee time app that allows making HD voice and videos over WiFi or a data network. Alongside this, it also supports screen sharing during video calls, allowing you to tag and share key information in video chats. 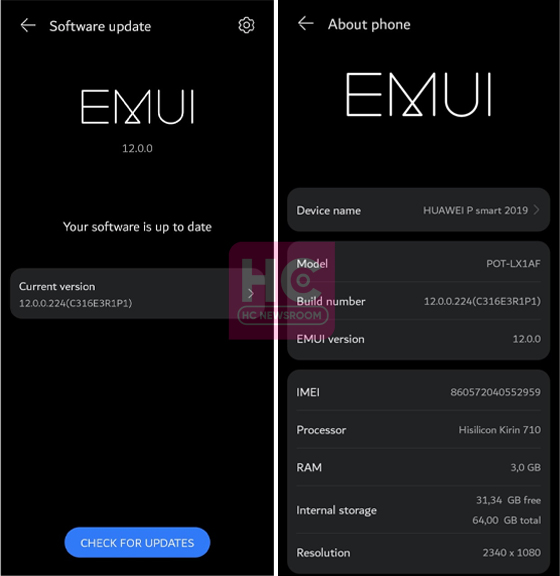 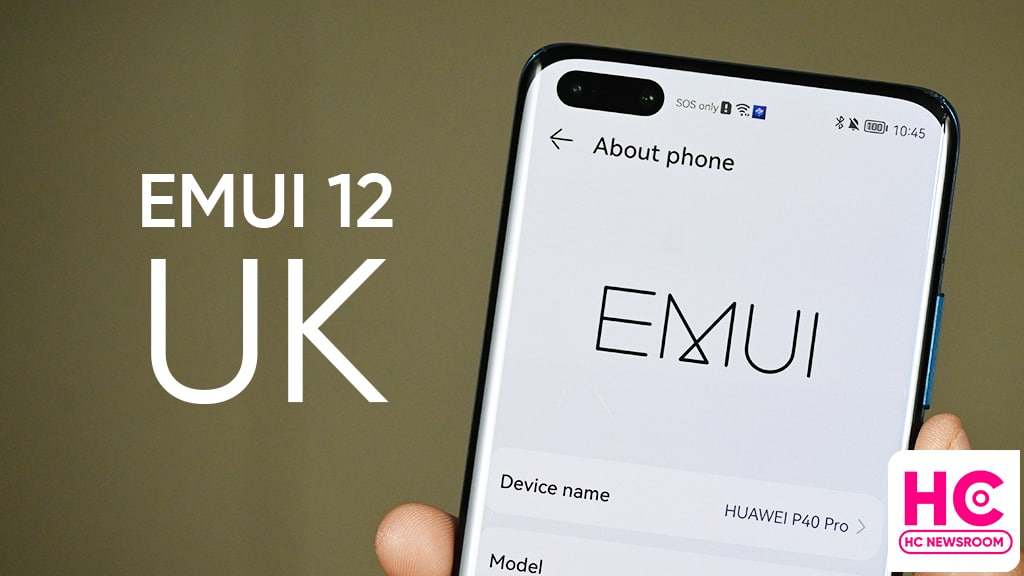 Huawei rolling out EMUI 12 in the global market and UK consumers to get this major software upgrade. Huawei phone users in the UK are downloading this new EMUI version with energy and excitement. The eligible device owners also share their experiences with this new EMUI software. As usual, most of the users liked the software others don’t.

Huawei is sending this update to add new features for eligible smartphones and tablets. Talking about the features, EMUI 12 will get you a new control panel, improved animation effects, better software performance, and timely execution of apps. There are also some new subtle improvements made to the internal system of the update that brings you better enhancements over its predecessor.

If you are wondering, which devices are eligible to get EMUI 12 in the UK, then we brought you the entire list of the models along with their designated OTA update rollout dates. Check the list below. 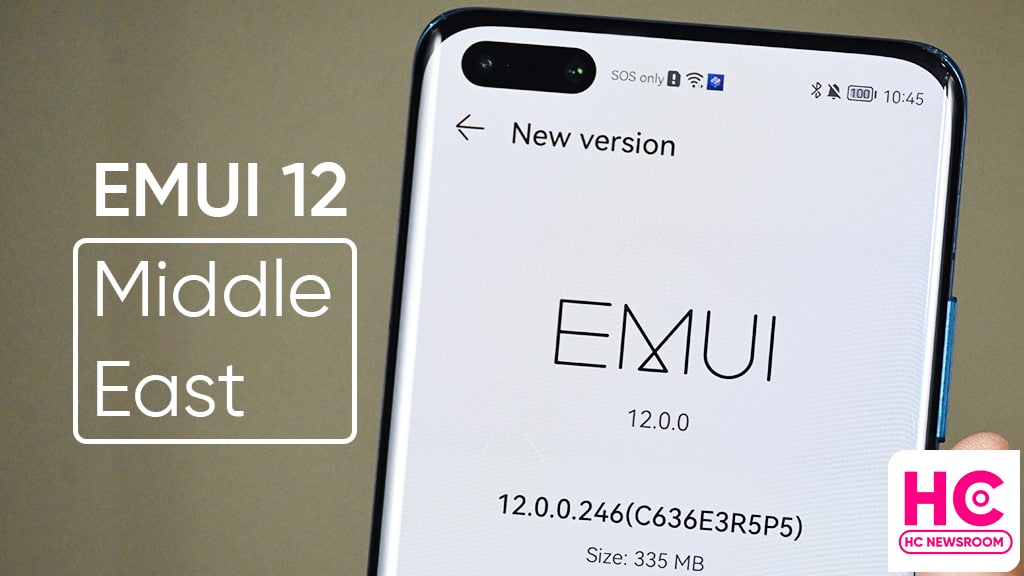 Huawei is rolling out stable EMUI 12 software updates for its smartphone devices, which are capable to pursue the latest EMUI version. According to the information, the company is trying to cover all possible devices under the umbrella of EMUI 12 including the Middle East region.

In this segment, Huawei has revealed the EMUI 12 official roadmap for the Middle East region that brings us information regarding the eligible devices, rollout start date, and current status of devices.

Speaking about EMUI 12, this EMUI software version is fully inspired by HarmonyOS 2.0 system. It brings a fresh user interface, new animation effects, Device+ to connect multiple devices at the same time, Huawei Share for fast file transfer, and much more.

Below, you can check the complete EMUI 12 schedule for the Middle East along with device eligibility and rollout time.

EMUI 12 Roadmap for the Middle East: