According to the latest data report, the total number of shipped smartphone units in the Q1 of 2021 globally was 354 million and accounted for year-on-year growth of 20% as well as the month-on-month decline of 10%.

The report also discloses that Samsung tops the list with a 22% shipment share, followed by Apple with 17%, Xiaomi with 14%, Oppo with 11%, Vivo with 10%, and Huawei on the sixth rank with a 4% share only. 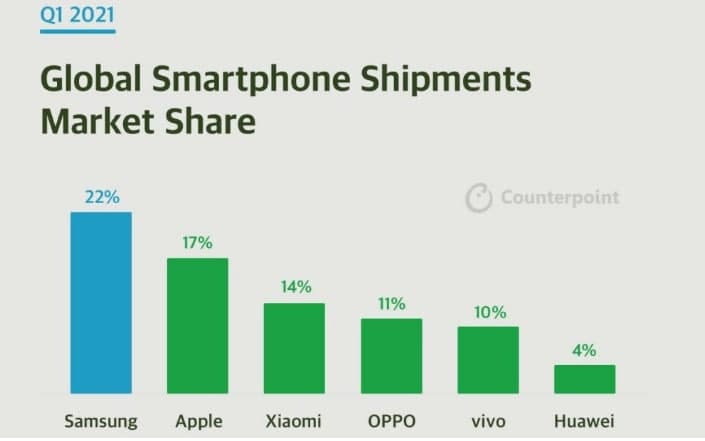 Talking about the Asian market, Vivo ranked first and holds 18% shares, OPPO, Xiaomi, Apple, and Samsung are in follow up.

In the North American market, Apple leads the list with the highest 55% holding, Samsung on the second, followed by LG, Moto, and Alcatel. It’s difficult to accept because LG has shut down its smartphone business due to its obscurity in other important markets and ranked third here.

Moreover, in Europe, Latin America, Middle East, India, and other markets, Xiaomi really performers well. However, these results are very disappointing for Huawei. But, the company is still working to overcome this situation and soon regain its position in the market.