Earlier this month, Huawei launched HarmonyOS, which comes with various new features, a new user interface, and the ability to establish connections between different devices.

At the event, Yu Chengdong, CEO of Huawei Consumer Business Group revealed the upgrade roadmap to install HarmonyOS in old devices. This roadmap includes various models that go way back to 2016.

According to the information, the upgrade roadmap consists of phones such as Huawei P20, P10, Huawei Mate 9 Mate 10, Honor 8X, and more.

With a roadmap that has over 100 devices, the company will definitely be going to take some time to send a bunch of HarmonyOS builds to the eligible device owners.

Therefore, the entire upgrade plan is divided into four batches and scheduled to complete by the first half of 2022.

But there’s more interesting information that has just arrived from the courtesy of Weibo tipster – DigitalChatStation. He reveals that Huawei likely to pace up the upgrade plan by an entire quarter than the announced plan. 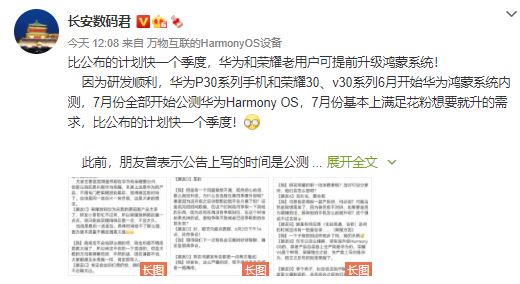 This is surely a piece of great news for the Huawei smartphone users and will help to push HarmonyOS early in the global market.

The tipster said Huawei is actively developing HarmonyOS for old devices, therefore, the development cycle is quite smooth at the moment. This would allow Huawei to send early HarmonyOS upgrades for old flagships including Huawei P30 and Honor 39 and V30 through the beta channel this month and the public beta in the upcoming.

In July, Huawei will bolster the HarmonyOS adaptation plan for old devices to meet consumer expectations.

The tipster uncovers that the time announced in the roadmap is mentioned as the public beta, so that every user can receive the version. Hereafter, we can say that the actual HarmonyOS rollout will not be late and Huawei is making sure that every rollout happens smoothly.

This could be a big relief for Huawei and especially Honor phone owners that have been scheduled to receive the HarmonyOS in the fourth quarter.

Still, we can only hope for Huawei to start the HarmonyOS beta testing in the global market as soon as possible.

For more information about HarmonyOS check the article linked below.