Earlier this month, Huawei introduced the brand new operating system, HarmonyOS 2.0 AKA Hongmeng OS 2.0. It comes with multiple platform support and could connect as well as control different devices.

With the unveiling, Huawei also announced the first phase of HarmonyOS 2.0 closed beta testing for 28 Huawei devices from different segments. Post recruitment, the company has begun the rollout of the HarmonyOS test version via OTA updates.

After one week of first phase recruitment, the Chinese tech giant recently opened the HarmonyOS 2.0 beta testing registration for 11 devices including the Huawei P30 series. The second phase of testing is started early as scheduled in the HarmonyOS upgrade roadmap.

Furthermore, the official announcement poster of HarmonyOS 2.0 beta testing for the second batch device also previews the Honor devices, which were going to be part of HM OS beta in the third phase.

According to the information, Huawei will open the enrollment HarmonyOS 2.0 closed beta slots for the third batch device at the end of June. And the HarmonyOS test version rollout will start later this month for registered devices.

Previous information shows that HarmonyOS for Honor 30, V30, Honor 20, and V20 was scheduled to start somewhere in the fourth quarter of this year but the company has surprised users with an early adaptation plan as well as preparations for a stable rollout.

To be noted these beta activities are based on Chinese models and Huawei is yet to announce the official global rollout plan for the global Huawei and Honor devices. However, we expect that Huawei will conduct the global version of HarmonyOS beta activity very soon. 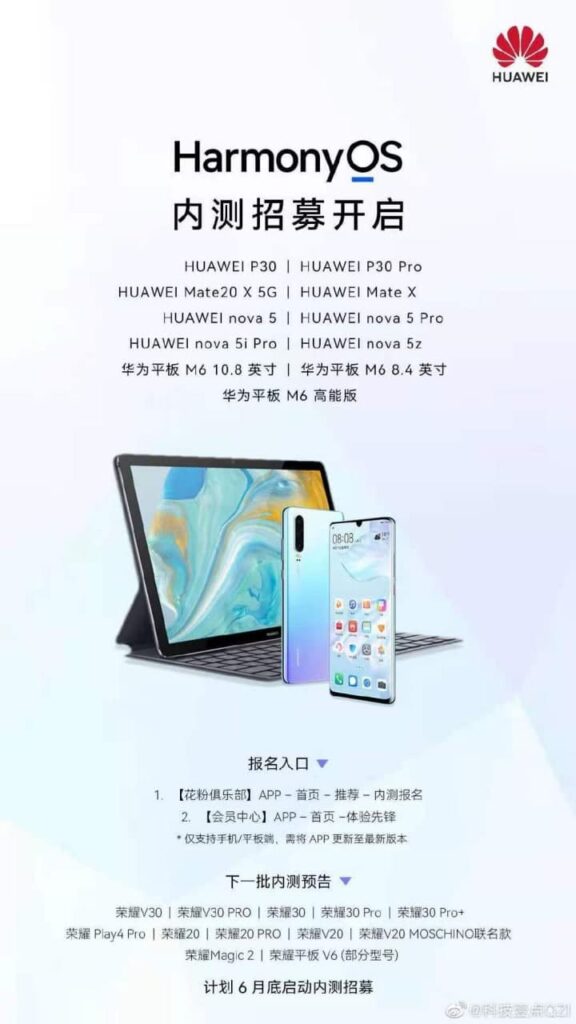