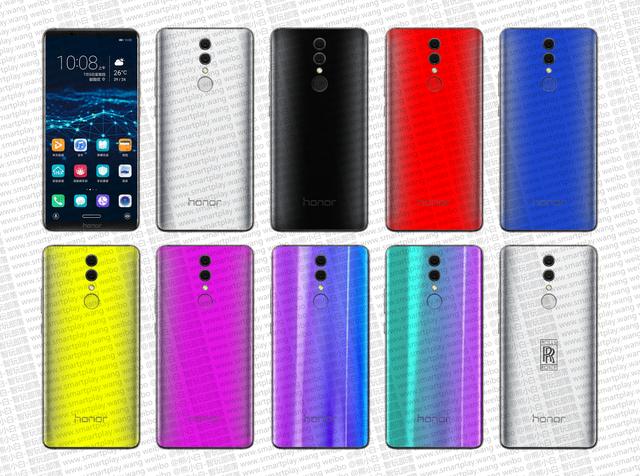 
Honor Note 10 is yet to make its official debut but its unofficial renders already surfaced online that confirmed the design of the device. Recently some more renders of the Honor Note 10 made their way to Weibo that shows possible color variants of the device.

The back has a bright silver mirror back cover. The layout of the camera and the rear fingerprint is similar to the Huawei Mate10 Pro. There are two cameras + LED light + fingerprint scanner aligned vertically, the overall look is still relatively eye-catching. This could be called a mobile phone with a value.

There’s a customized version/special edition of this device, from the custom logo on the back of the fuselage can be seen, this turned out to be Rolls-Royce custom Version which will be available at a higher price than usual. Any of these specs and information is yet to be officially confirmed by Honor.

The color variants shown in the image above are: Silver, Black, Red, Blue, Yello, Purple, Gradient(Blue+Purple), and a Rolls Royce Variant. These color variants are yet to be announced and unconfirmed, it’s a possibility that these color combo could be official because Huawei already has a wide variety of color option. In addition, these could bring a good selling point for a big screen phone.

Recently, the pollen club official Weibo issued a message: “What are your expectations for the preparation of the 2 years of the flagship collection of the year’s flagship Honor Note 10?”, in addition to the poster with the words “Honor Note 10, scary Technology, here 10”. It is reported that Honor Note 10 will not only pre-install GPU Turbo’s very scary technology but will also upgrade this technology to a new level, which will make the phone faster and cooler.