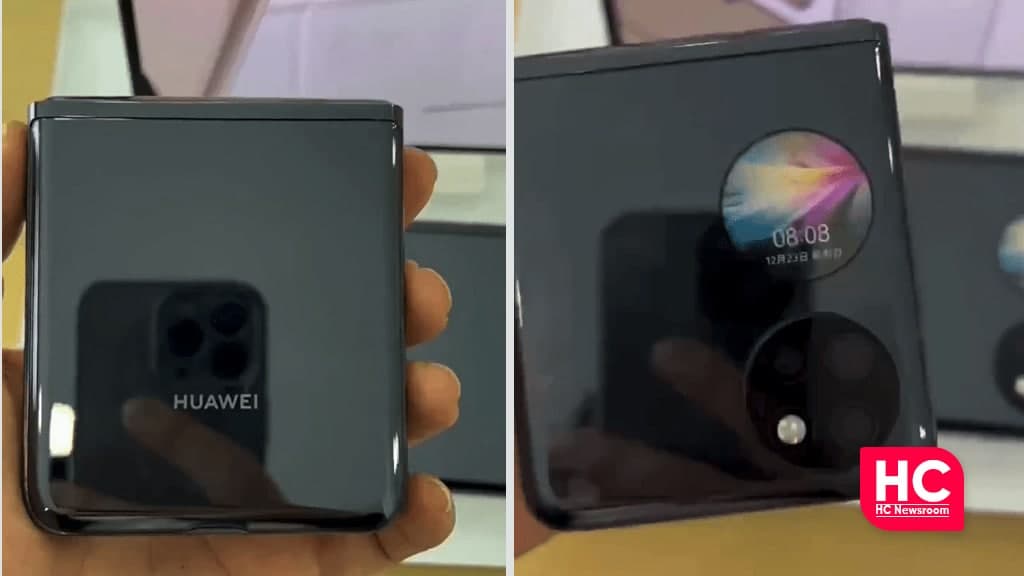 Ahead of launching, the upcoming Huawei P50 Pocket smartphone’s all the specifications, design, and live images already leaked through various online platforms. Alongside the foldable phone, during the launch event, the Chinese tech maker also reveals a bunch of new products including Huawei Watch D Blood Pressure, smart speaker, and more.

Huawei P50 Pocket hands-on video showcases that this foldable smartphone adopts a vertical inward display design (clamshell) and the brand logo is printed on the backside and hinge. The overall appearance of the phone is stunning and the size seems to be pocket-friendly.

On the rear side, it has two large rings among them one equipped with a triple camera system with a LED flash. While the second one features a display for notification or can be used as a selfie viewfinder.

Meanwhile, the P50 Pocket flip-style phone’s backside in this video is recognized to be a gray-black color smooth design and made of glass but its lacks of art edition. The previous live images and official teaser images show a 3D diamond pattern on the rear side that gives it a stylish look.

Furthermore, it means that the upcoming P50 Pocket is also likely to have plan color variants along with a 3D pattern version. This phone gives the identical looks as foldable Huawei P50.

Huawei P50 Pocket will come with a 6.8-inch main display that folds inwards and may equip Kirin 9000 4G (initially), followed by Snapdragon 888 version. There’s a new hinge system to back the vertical flip-style fold design, as compared to the Mate X2.