Recently, Huawei has launched a number of 5G flagship with 4G version including the Mate 40 Pro, Mate X2, P40, and mid-range devices including the Huawei Nova 8 Pro. Aside from the 5G, the specification of these devices remains the same as their 5G versions, as both models are powered by the Kirin 9000 chipsets.

Adding to this, Huawei Mate 40 Pro 4G has recently received network certification from Telecommunication Equipment’s Network Access Managements (TENAA) in China. The hardware specs and the parameters are identical to its 5G variant.

Surprisingly, the phone is registered with a pre-built HarmonyOS 2.0 operating system, which Huawei’s first phone to be spotted with pre-installed HarmonyOS. (Via DigitalChatStation – weibo) 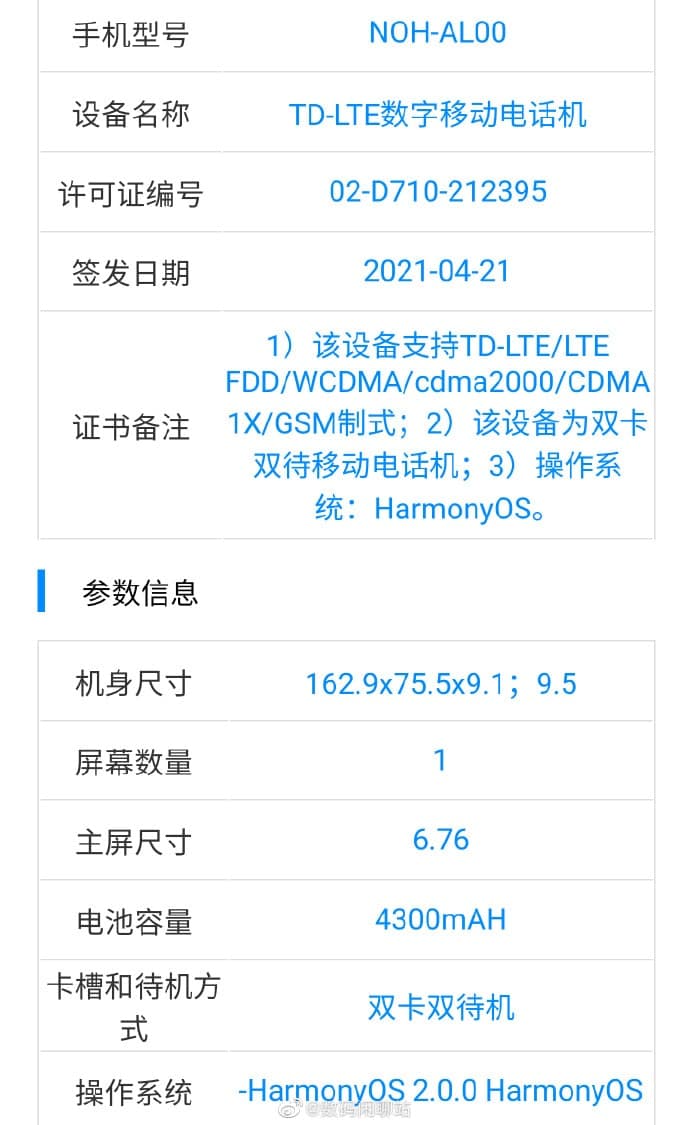 However, according to Yu Chengdong, the CEO of the Huawei Consumer department, Huawei is planning to launch the HarmonyOS for mobile devices later this month and will install it on older devices through software updates.

Back in March, Huawei’s first tablet with model number WGR-AN19 also completed TENAA certification and identified as Huawei MatePad Pro 2. Most importantly, the tablet is pre-equipped with HarmonyOS 2.0 software.

This year, Huawei has planned to install HarmonyOS in 300 million devices including 200 million smartphones, and the rest of the figure includes tablets, smart wearables, in-car systems, third-party consumer products, and more.

Wang Chenglu, Huawei Consumer Department Software President said that HarmonyOS is a new generation of intelligent device operating systems that provide a unified language for the intelligence, interconnection, and collaboration of different devices.

Breaking: Huawei will reveal information about HarmonyOS for global users later this year

Huawei P30 and P30 Pro users are enjoying two different software, the global one has EMUI and in China, it has HarmonyOS operating system. However, these prime devices will get the next big upgrade by next year.

Meanwhile, the global P30 models have already grabbed EMUI 12 and now they are also ready to get EMUI 13 as the next installment. However, Huawei is yet to confirm its stand on this matter.

Even though Huawei has announced to rollout of HarmonyOS 3 for P30 and P30 Pro next year but we may see an early beta testing by the end of this year. As the Chinese tech maker has completed HarmonyOS 2 rollout faster than what had been planned formally.

Launched in July this year, HarmonyOS 3 is a major software upgrade for Huawei devices. As the rollout expands to hundreds of models, it comes with various improvements and new features over the past version.

Speaking of which, it has a new layout reorder for the best user experience of your phone’s home screen. The HarmonyOS 3 further improves the super device feature to expand the supported platforms.

The cross-device screen projection has been optimized to project a Huawei phone or tablet on a big display such as a laptop or a monitor to support the view on a large view.

One of the biggest changes that Huawei has brought in with HarmonyOS 3 includes the new service widgets, which you can now stack over each other to save screen space or group them all with each other as a large folder.

Huawei has also increased the security and privacy section for smartphones and Huawei P30 and P30 Pro will also receive this new operating system. 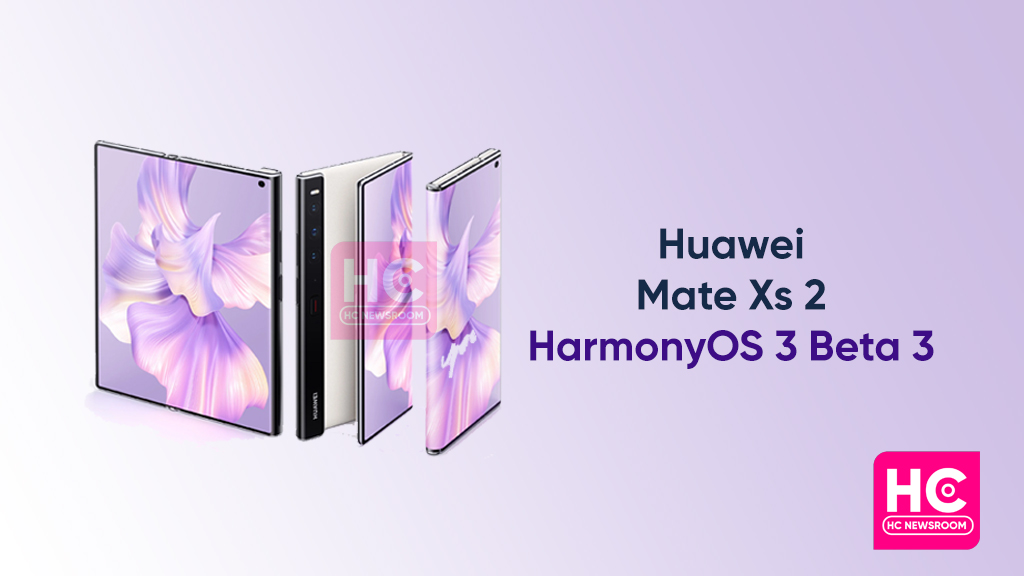 Huawei Mate Xs 2 – the most flexible screen users can now opt for the ultimate HarmonyOS 3 new beta version. Huawei released the HarmonyOS 3 beta 3 for the Mate Xs 2 users with a number of optimization.

The HarmonyOS 3 comes in September 2022 security update to protect the security to avoid bugs from the system and affecting your smartphone safety in terms of functioning.

However, the patch also improves the stability of the internal system with more than 60 fixes. Therefore, a moderate-sized pack of security and optimization is moving toward your smart tablet.

Additionally, the update makes it easier to handle the device’s cleaning processes. This is the key component that the company is including in every device’s third beta deployment. The task card that continuously accumulates cache files and other useless data is what this cleaning management ultimately pertains to.

Meanwhile, the September 2022 security patch helps your device to patch all the security gaps from the previous version of HarmonyOS 3 beta. We recommend you update this new version on your Huawei Mate Xs  2 smartphone as soon as it reaches your device.

Notably, the update will not delete or erase your data but it is still recommended that you back up all the important data on the close before the updating and confirm the backup content to some third parties. 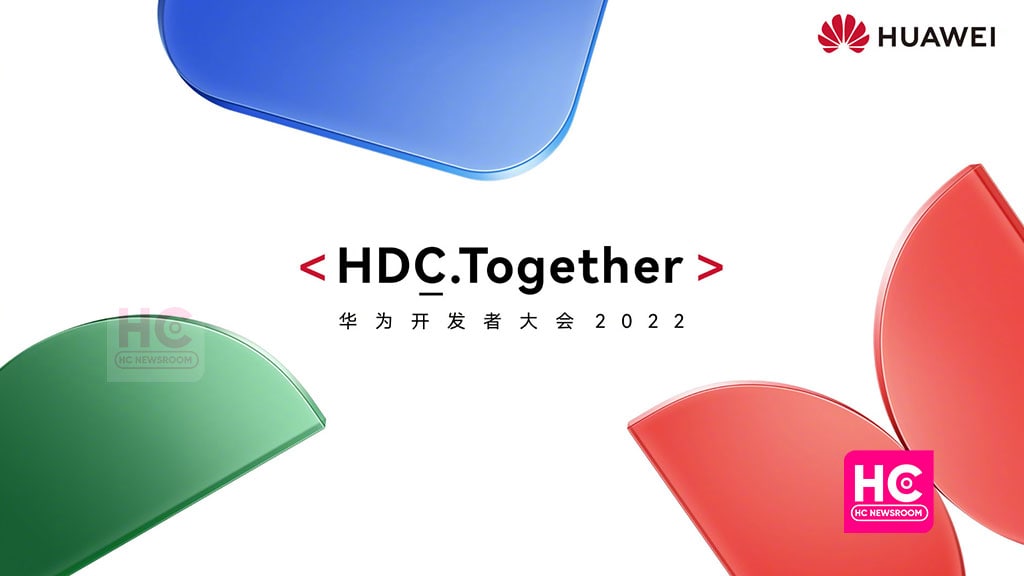 Today, Huawei has made some official statements regarding the 2022 Developer Conference and the upcoming HarmonyOS technology. Yes, after HarmonyOS 3.0 interface, something more surprising is going to hit the consumer surface soon.

The Chinese manufacturer has shared a post on its several Weibo channels and official sites for the 2022 Developer Conference. Accordingly, the news begins with an apology statement for delaying this thoughtful event for a few days more.

Yes! Initially, the company scheduled the event from October 21st to October 23rd. However, now the date has shifted one week ahead which is November 4th to November 6th. Though there is a change in the date, but that does not affect the ticket purchase rights.

Ahead, the company states that in the recent few years, Huawei and its partners have made genuine efforts to blaze a better life and user experience. Consequently, Huawei Developer Conference has remained a significant and constant proof of these efforts.

Undoubtedly, these efforts will continue in the time ahead.

Huawei has also informed the 2022 Developer Conference will introduce new HarmonyOS technology. The Chinese tech maker hasn’t revealed much on this matter. However, the surety is that this dynamic tech will build a more convenient and effective development platform for the developers.

Further, there will be big coffee gatherings, rich developer activities, and various contests for showing skills. Events like the Huawei Hetu game, lakeside music festival, and more will also be a part of this iconic conference.

Here are the timings and venues for some prominent events:

Below you can check the concurrent plans (planned)

Pine Lake Dialogue: Invite industry leaders to focus on HarmonyOS, HarmonyOS Connect, and other industry topics, and have a dialogue with the future.