On May 14, a piece of news was circulating on the web that an employee from the smartphone maker brand – OPPO has made some bad comments on Huawei’s self-developed operating system, HarmonyOS AKA Hongemeng OS on the WeChat group.

Furthermore, the screenshot of the WeChat comment window was surfacing online and it becomes the hot topic of discussion among the consumers as well as Huawei fans.

According to the latest information, this employee has recently resigned from OPPO after feeling the regret of making a bad comment on the Huawei Hongmeng operating system.

On May 28, this staff member has also posted an apology through his Weibo account and said:

“I have no basis, just relying on some so-called online articles and provocations to deny the value of Hongmeng, which not only harms Huawei but also affects the company.

Also, he mentioned that I was eager to comment failed to distinguish between the identity of the blogger and the role of the job, making the peoples think that I am here on behalf company.

However, I am actually an ordinary employee of OPPO and created so many misunderstandings and troubles, it is unqualified in public relations work and does not conform to the company’s values.

Today, I officially ended my work at OPPO, and very sorry to everyone again. I want to continue my job but I feel that I am incompetent and cannot face my colleagues. From today onwards, I’m behind closed doors, and I’d like to say goodbye to Weibo and the past me…” 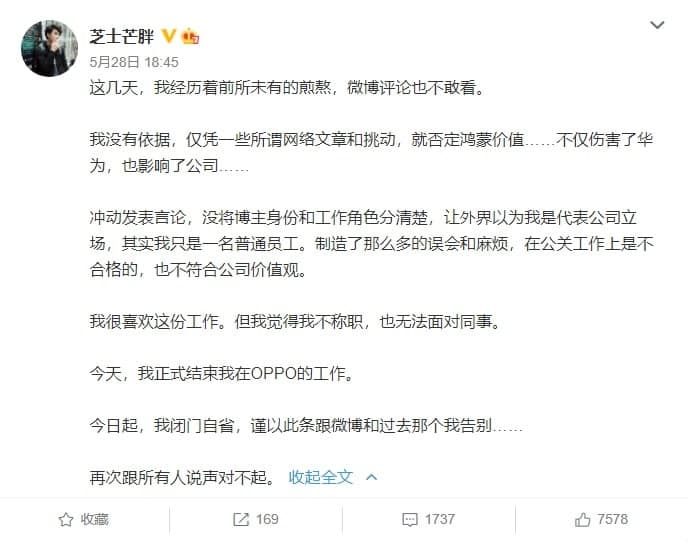 HarmonyOS is a new generation of operating systems of Huawei, which provides a unified language for the intelligence, interconnection, and collaboration of different devices. Bring a simple, smooth, continuous, safe, and reliable full-scene interactive experience.

Huawei will launch this HarmonyOS on June 2 and at the launch event, the company will also unveil a number of new smart products including Huawei Watch 3, Huawei MatePad Pro 2, Smart Screen Smart TVs and new P series flagship – Huawei P50. All of these devices will run a pre-installed HarmonyOS software system.