Huawei has currently become a victim of US-China trade war that’s making damage to the company’s business around the globe but despite its ongoing problems, the company has successfully posted good results on Q2, reveals a report from a market researcher.

Huawei retains second spot in the global smartphone market with an increased 17% share for Q2: SA

According to data compiled by Gartner, Huawei grew its global smartphone shipment with 58 million during Q219 from 49 million in Q218 but recorded less than in the comparison of Q1. The company acquired a 15.8% global smartphone market share in Q2 2019, up from 13.3% last year.

On the list, Samsung stays on top with 75 million shipments and a 20.4% share. Apple comes on third with 38 million sales and 10.5% share, the company also saw a decline in its sales and shares.

Apart from the global market, the report from Canalys says the Chinese tech giant has captured 27.6% of the total Chinese smartphone market and counts as the only company to seen growth in its business for the second consecutive quarter.

Meanwhile, the global smartphone market shipment continues to decline and in the second quarter of 2019, the decline rate is 1.7% with a total of 368 million units shipped. 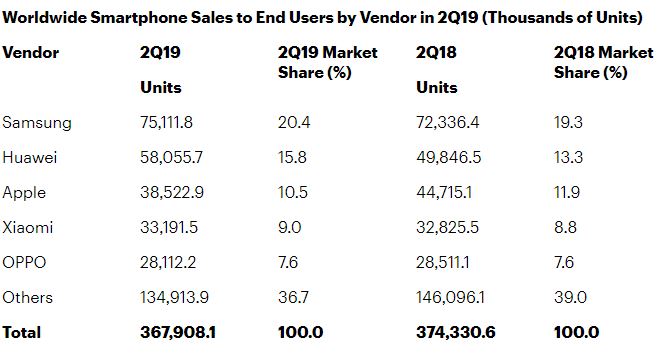