Despite being restricted by the US ban, Huawei has still maintained its second spot in global smartphone vendor list of May 2019, says report.

Huawei scheduled Developer Day event on May 31 to boost AppGallery

According to the data compiled by Gartner, Huawei has maintained its ranking as the no.2 smartphone vendor worldwide in May 2019 and continued to reduce the gap with Samsung.

The data shows, In the first quarter of 2019, Huawei achieved the highest year-over-year growth among the world’s top five, growing 44.5% and smartphone sales totaling 58.4 million units. On the other hand, Samsung retained is still on top spot with 19.2% market share along with 71.6 million units.

Previous reports have revealed that Huawei and its smartphone subsidiary Honor has maintained its dominance in the domestic market and the only firm that continuously achieving growth compared to its rivals.

“Huawei did particularly well in two of its biggest regions, Europe and Greater China, where its smartphone sales grew by 69% and 33%, respectively, said Anshul Gupta, research director at Gartner.

Unavailability of Google apps and services on Huawei smartphones, if implemented, will upset Huawei’s international smartphone business which is almost half of its worldwide phone business. Not the least it brings apprehension among buyers, limiting Huawei’s growth in the near term,” said Mr. Gupta.

Also, some of the market analysts forecast that due the current issues Huawei facing from the US ban, it can see a shipment decline in the upcoming quarters and this situation will directly benefit its rivals including Samsung, Xiaomi, Apple and more. 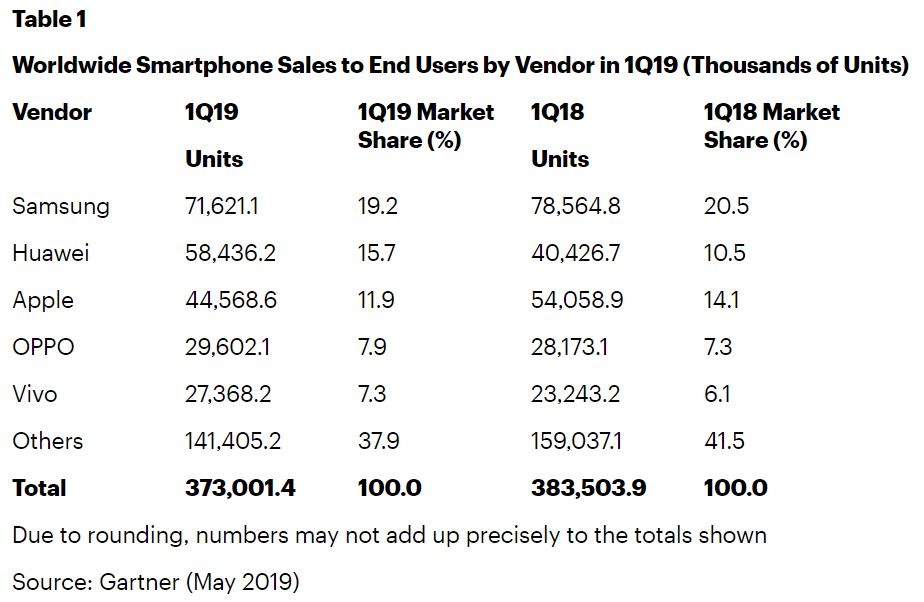