Huawei’s first-half business results showed us that the company is moving forward and unaffected by the US trade ban, the progress is also seen in its global smartphone market share, reveals the latest report.

According to market researcher Strategy Analytics, Huawei has captured 17% of the global smartphone market and retained its second spot among top smartphone vendors for the second quarter of 2019.

Meanwhile, Samsung stays on top with 76.3 million shipments and a 22.3% market share. Apple comes on third with 38% million sales and 11.1% share, the company also saw a slight decline in its sales and shares.

“Huawei surged at home in China during the quarter, as the firm sought to offset regulatory uncertainty in other major regions such as North America and Western Europe,” said Neil Mawston, Executive Director at Strategy Analytics.

The report from Canalys says the Chinese tech giant has captured 27.6% of the total Chinese smartphone market and counts as the only company to seen growth in its business for the second consecutive quarter. 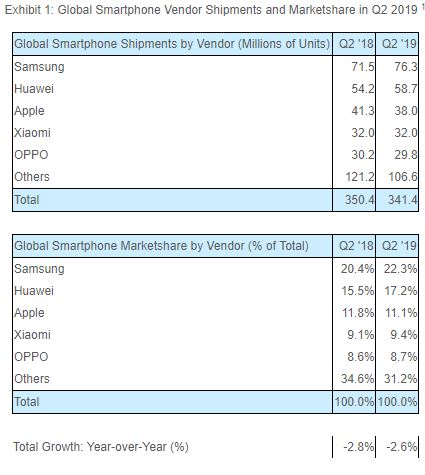