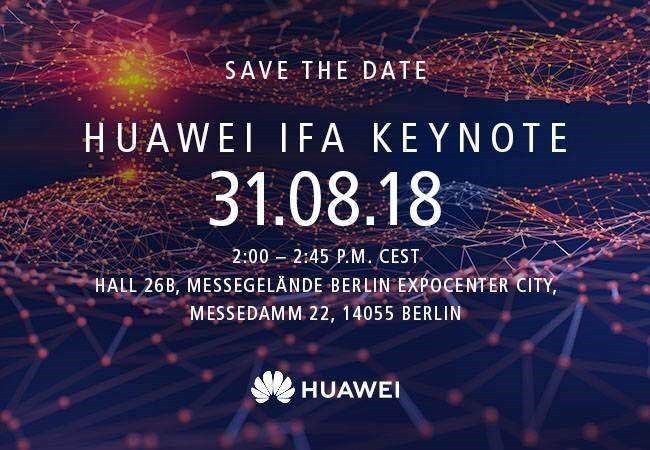 
Every year Huawei holds two flagship series conferences, that cover first half with ‘P-series’ and second half with ‘Mate-series’. The company has already brought us P20 and P20 Pro in Paris, so the upcoming second half is ready to cover Mate 20 and Mate 20 Pro.

Ahead of its IFA conference, an image has unofficially appeared on the internet, that reveals Huawei will hold a new product launch conference at IFA 2018 in Berlin, Germany on August 31, at 2 PM Central Daylight Time. There’s a huge possibility that this poster could be a false count ahead of the official event because Huawei has not announced any news on this image.

It was previously rumored that the new Kirin 980 processor and the annual Mate 20 flagship will be released in a schedule similar to last year as one after another, let’s explore further on the expected launch dates of both products.

First off Kirin 980 SoC Is confirmed to launch in the IFA 2018 conference. After the launch event of Huawei Nova 3 earlier this month, a Huawei official has announced that the development of the Kirin 980 chip is about to reach its ending and the launch conference will be held during the IFA in September.

According to the recent exposure, Kirin 980 uses TSMC’s 7nm process and integrates the second generation of Cambrian NPU. The CPU and GPU cores are further upgraded (currently expected the latest ARM core is Cortex-A76 and Mali-G76), but it is unlikely to adopt self-developed GPU because of the production date. Considering that the Kirin 970 used the A73 core in the CPU part last year, the CPU aspect of the Kirin 980 expected to be more adequate this year.

Moving on to Huawei Mate 20 flagship, the chances of Mate 20 series to appear at IFA conference are quite not possible. After all, the Huawei Mate series is not a kind of flagship that participates in IFA, instead, the company chooses to hold its own conference in Munich. Considering this year’s pace, the company could introduce Kirin 980 first and then Mate 20 series in later month similar to last year which will be equipped with Kirin 980, GPU Turbo Technology and better camera setup.

Let’s have a talk about Huawei’s subsidiary ‘Honor’, a launch poster that has appeared online shows Honor is also planning to launch a new product in Europe set to unveil on August 30. This device could be Honor’s last month installment Honor Play a Gaming phone geared with heavy specs.

Recently a launch poster was also revealed by Amazon India website which shows the launch date of Honor Play in India on August 6. Way ahead of the above-mentioned date but it contains something similar to the promo poster that nearly confirms device’s identity. Honor’s next Note series flagship ‘Note 10’ will be launched on July 31 in China which could also take part at the event in Europe.