Global smartphone shipments decreased by 16.0% year over year (YoY) in the second quarter of 2020 (2Q20). Meanwhile, Huawei has dethroned Samsung from the first place in the global smartphone market, reveals a report.

According to the data generated by IDC, Huawei for the first reached the top position with 55.8 million smartphone shipments in 2Q20 and a decline of 5.1% YoY. Also, the company acquired its biggest share ever of 20% of the global smartphone market.

“This was driven by Huawei’s tremendous growth in China – almost 10% year on year – which offset the large declines the company faced in every other region. Looking forward the impact of the U.S. technology ban will continue to create uncertainty for Huawei in foreign markets.” wrote IDC.

Samsung slips to second place, shipping 54.2 million smartphone units in the 2Q20, while its smartphone market share to 19.5% share with a huge 28.9% YoY decline.

However, the Korean giant suffered a 28.9% year-on-year decline, the most significant among the Top 5 vendors. While the A-series continues to perform well contributing to the majority of its volume, premium devices such as the Galaxy S20 and the Galaxy Z Flip, unfortunately, launched in the peak of the pandemic, are facing sales challenges despite price reductions. IDC. 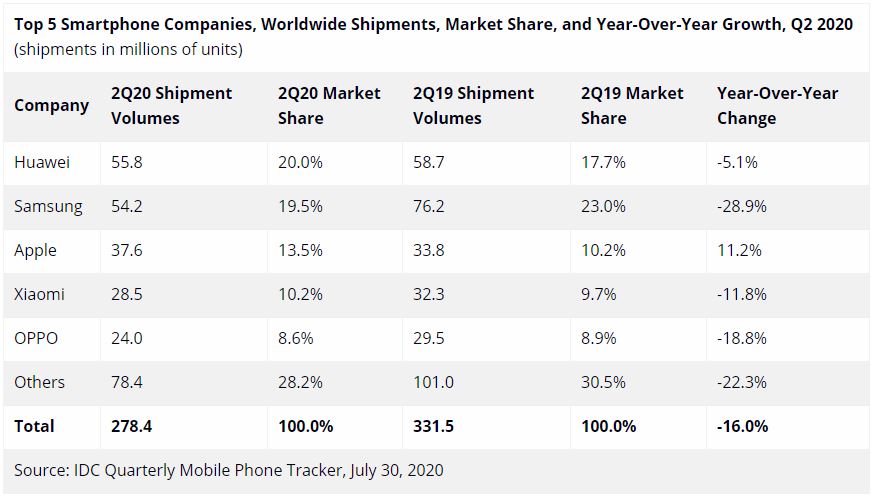 According to a report from Counterpoint Research, Huawei in the second quarter grabbed its highest ever 46% share of the total Chinese smartphone market with 14% year on year growth.

On the other hand, Huawei also claimed a 60% share of the total 5G smartphone market in China, which is a massive result of its home-market product strategy.