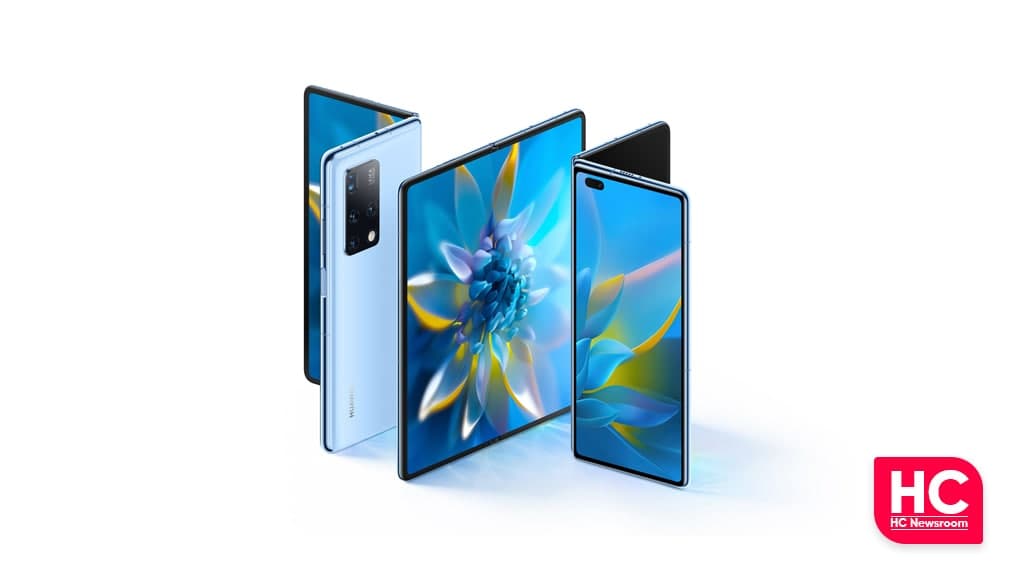 Huawei could be planning for another foldable smartphone this year. According to the latest information by a Weibo tipster, the company may introduce its new folding phone by the end of 2021. Although, this device may still be a 4G handset just like the recently launched P50 devices.

Currently, we have not encountered any other details about this device such as the specifications or the design scheme. Also, Huawei has not yet officially confirmed such a device’s existence. 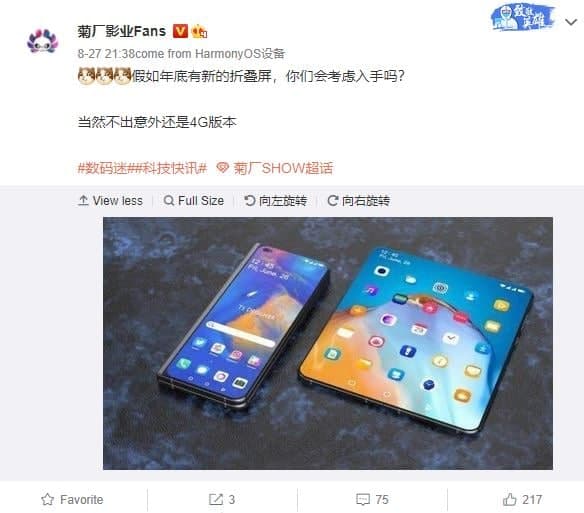 Back in February, Huawei launched the second generation foldable phone – Mate X2 foldable. This phone comes with a brand new design that is different from the first-gen foldable phone. The reason being chip shortage and the US sanctions, which forced the Chinese phone maker to delay its flagship lineups of this year.

However, the company somehow managed to introduce the P50 phones on July 29. After the release, these smartphones have impressed the users in several ways such as the high-end camera capabilities and an attractive design, although the 5G is missing.

Moving on, the Chinese tech giant usually uncovers its Mate-series phones in the second half of the year. But as we know, things have changed a bit this year. As per the recent report, the Mate 50 series might come at the end of the second quarter in 2022, which could bring 5G back to Huawei flagship phones.

This piece of information about the new foldable smartphone has come as a surprise and if there is such a thing in development with Huawei, we will surely receive more such leaks about it in the future. We’ll keep you updated as soon as something new comes up.

On February 22, 2021, Huawei launched Mate X2 with a brand new in-ward folding mechanism. It equips two displays, which include an 8-inch foldable panel with higher resolution and fewer bezels. And it has a 6.45-inch cover OLED display with a pill-shaped selfie camera cutout.

This foldable phone is powered by the Kirin 9000 octa-core processor with Mali-G78 GPU. It also supports 5G connectivity and Wi-Fi 6+ for faster network connectivity. The smartphone packs a 4500mAh battery with 55W fast charging.

The Mate X2 comes with a quad rear camera setup with a 50MP Ultra Vision camera, a 16MP Cine Camera, a 12MP Telephoto lens, and an 8MP camera with 10x optical zoom. On the front, it equips a 16MP camera for selfies.

In software terms, the phone comes pre-packed with the Android 10 based EMUI 11. Furthermore, it includes connectivity options such as Bluetooth 5.2, USB Type-C port, and WLAN. 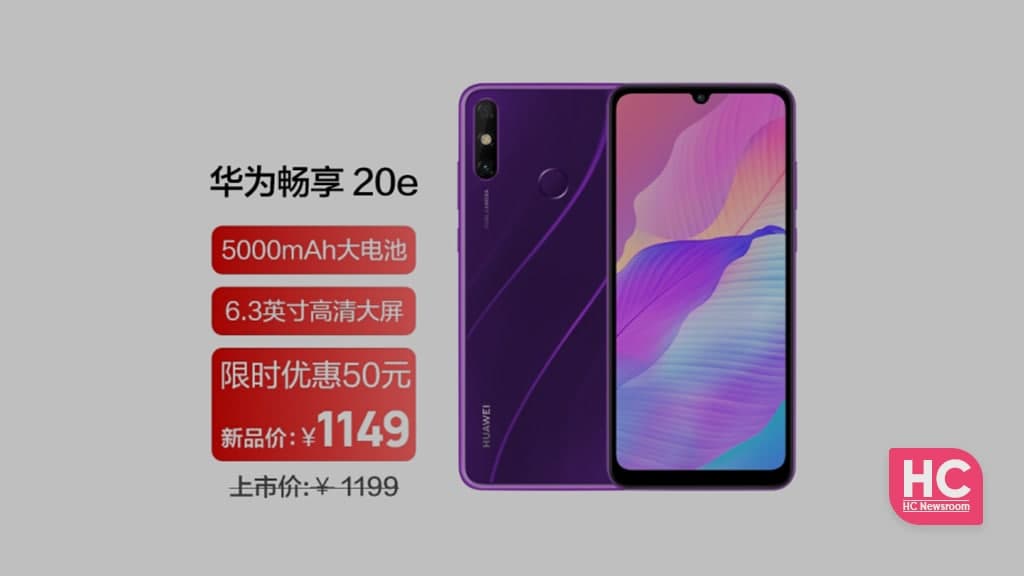 The latest Huawei Enjoy 20e is available to pre-order on the Chines e-commerce store- JD.com. This smartphone has made a silent debut directly in stores but wasn’t available for purchase till yesterday.

Although its design is quite similar to the previous Enjoy 10e, it has new software capabilities enhanced by the HarmonyOS operating system. In addition, the new phone is available with a first release discount besides its reasonable pricing.

Now, lets’ jump to the specifications of the smartphone-

Huawei Enjoy 20e features a 6.3 inches display containing a teardrop notch to place an 8MP selfie shooter. Furthermore, it provides an HD plus resolution to deliver an enjoyable and clearer visual experience. Meanwhile, the body composes a double-sided 2.5D glass to retain its glossy look.

In addition, its rear embodies an S-shaped holographic texture and has a circular fingerprint scanner. The smartphone comes with three color offerings that include the following- 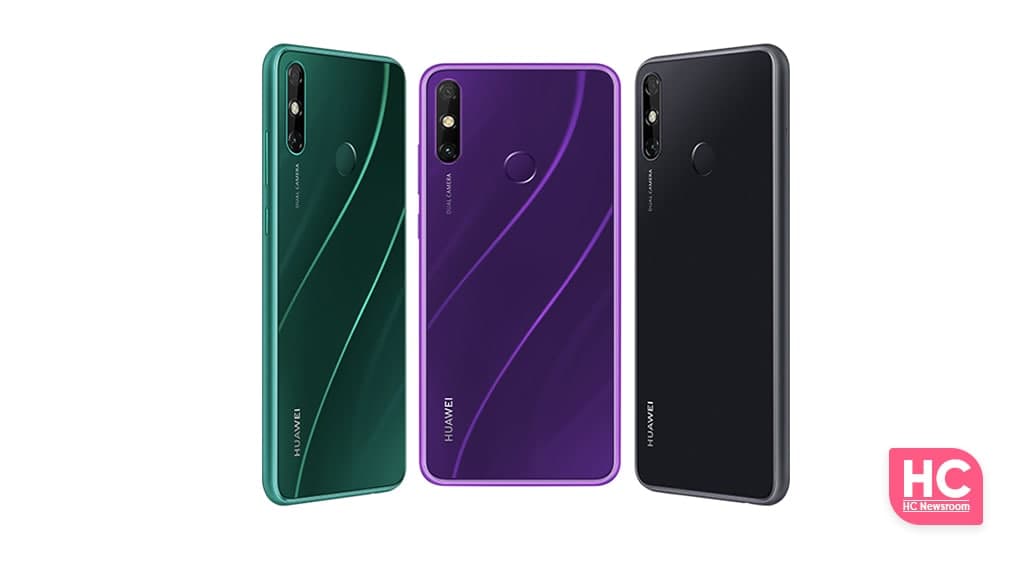 Additionally, the sound system is powered by Huawei SuperSound audio solution to deliver an effective sound effect. It provides a maximum volume of 86dB to make your gaming or movie more enjoyable with the surging sound waves.

At present, the MediaTek Helio P35 chip (MTK6765) with EMUI 10.1 software is available for purchase. However, the info shows that there is also a high-end version featuring the HiSilicon Kirin 710A chip and runs Harmony OS but that is yet to be available.

Furthermore, it packs a 5000mAh battery supporting a super power-saving mode. It also supports reverse charging and works as a power bank to charge other devices.

The interested buyers can visit JD.com and place a pre-order there for Huawei Enjoy 20e. However, the buyers have to pay the full amount at once and wait for the product to be shipped. Furthermore, the expected delivery will take a while but the smartphone will come with the company’s official services and warranty.

Huawei has silently launched a new smartphone – Huawei Enjoy 20e on the official Chinese online store this day. Despite its listing, the phone is not available to purchase and only the appearance of the device has been revealed.

According to the information, the Huawei Enjoy 20e comes with a 5000mAh battery, 6.3-inch HD display, 128GB of internal storage. The phone has a fingerprint scanner on the rear side and there are two colors to choose from.

The appearance is quite similar to the Huawei Enjoy 10e but there are several ways this phone could be better than the last-gen product. The Huawei Enjoy 10e comes with a big 5000mAh capacity battery, 6.3-inch waterdrop notch display, EMUI 10 (Android 10), and more. 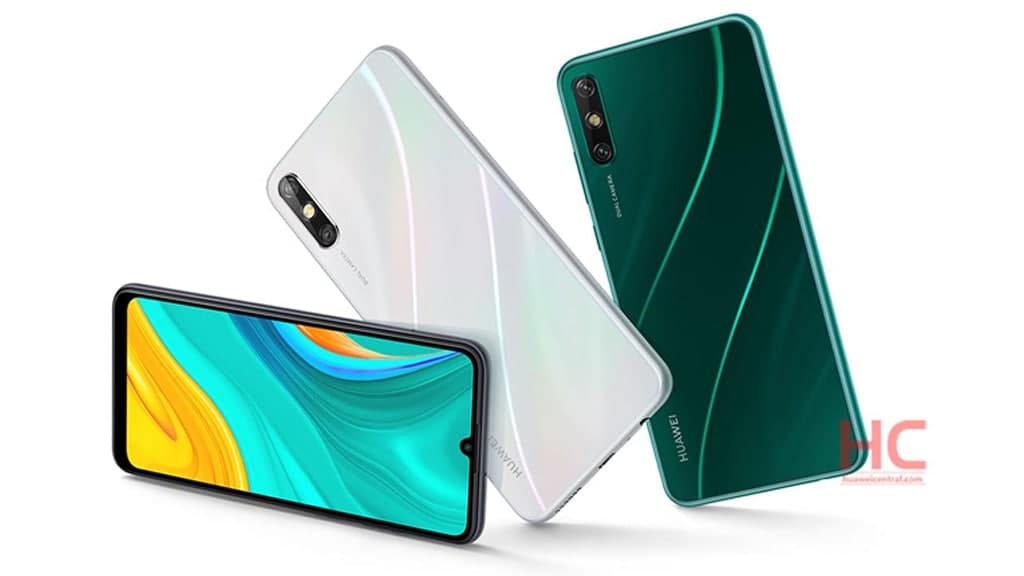 Huawei Nova 8i, a recent mid-range phone of the company is reaching more markets and now has entered Arabia. Coms with satisfying features such as Snapdragon processor, 64MP AI quad-camera system, and 66W super-fast charging support, this smartphone is available in three vivid colors.

To date, it’s the most recent headset in the overseas market. However, Huawei will soon introduce the vlog camera- Huawei Nova 9 for global users. Related to this, the smartphone maker has announced the launched event in Germany and Spain on 22nd October.

But for now, let focus on the Nova 8i. The users can directly buy this model with 8GB of RAM and 128GB memory storage alongside two color variants. In addition, buyers will also receive a Huawei power bank to make the fullest use of smartphones’ 66W charging capabilities. The offers and pricing details are written below.

Huawei Nova 8i offres in Arabia:

The smartphone features a  6.67 inches LCD screen assembled with NCVM craftsmanship to maintain a 4D curvature look. Its edgeless display provides a 94.7% screen-to-body ratio making a larger viewing space. In addition, the display has benefits of 2376 x 1080 FHD+ resolution with a high colour gamut technology.

The device is powered by Qualcomm Snapdragon 662 processor and Adreno 610 GPU to operate 7 built-in antennas and a 180-Hz touch sampling rate. It let you experience the pleasure n ultra-smooth gaming with the Smart Game Assistant. Meanwhile, the software side offers EMUI 11, MeeTime HD Calls, Huawei Share, Note Lock, and the Huawei App Market.

Coming to the camera, the smartphone features an AI beauty integrated lens of 16 MP on the front and 64MP (including 64MP+8MP+2MP+2MP lens) on the back. Its advanced sensor lets you capture all your best moments in vivid aspects.

The device’s battery is the only thing that remains to discuss. Huawei Nova 8i has a 4300 mAh large battery with the benefits of power-saving AI algorithms. Moreover, it takes 17 minutes to fill 60% of the battery level and 38 minutes for a complete charge.