Announced on December 16, HarmonyOS 2.0 (Hongmeng OS 2.0) mobile beta is now available for select P and Mate series users (especially for developers) to create an applications ecosystem. The company has also aimed to install HarmonyOS on more than 100 million devices by 2021.

According to the information, Huawei likely to include HarmonyOS into its 1+8+N smart ecosystem strategy, which will increase the reach of HarmonyOS 2.0 to more devices and consumers.

In the “1+8+N” strategy, the ‘1’ represents the smartphones, which is central to the ecosystem, connecting and controlling the wider devices. The ‘8’ denotes external devices like Huawei Watch GT 2, Huawei MatePad Pro, Huawei MateBook X Pro, Huawei FreeBuds 3, Sound X, and Huawei Vision. And the ‘N’ layer consists of all the third-party IoT devices that are connected using Huawei HiLink and Huawei Share technology to seamlessly connect everything together. 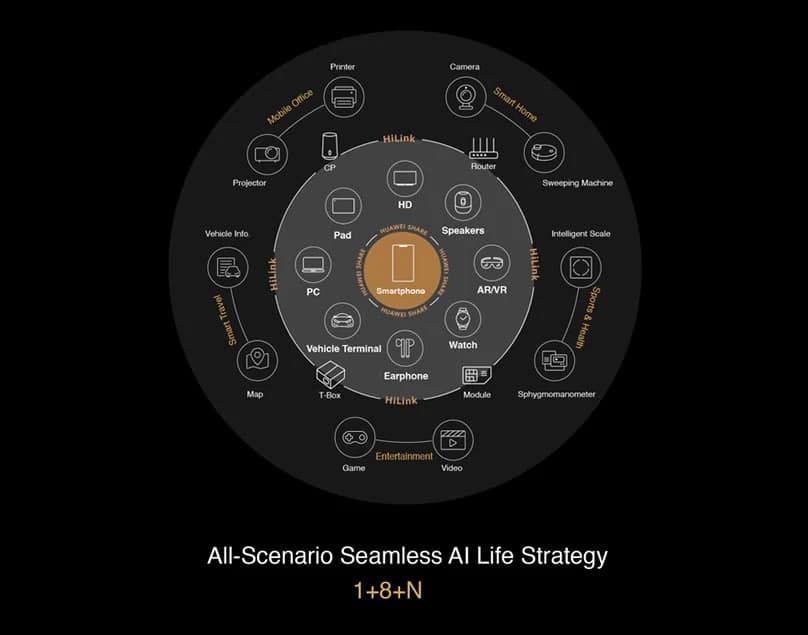 Currently, the Chinese tech giant has opened HarmonyOS 2.0 mobile developer beta for Huawei P40, P40 Pro, Mate 30, Mate 30 Pro, and MatePad Pro devices in its home ground. According to the initial hands-on video, the user interface of HarmonyOS 2.0 mobile is almost the same as EMUI 11 but there is also a clear performance difference between these two software systems.

Regarding the user interface, Huawei will offer a new user interface for HarmonyOS 2.0 once the beta testing concludes, which suggests that the stable rollout will bring a number of new features for the consumers, reveals a recent report.