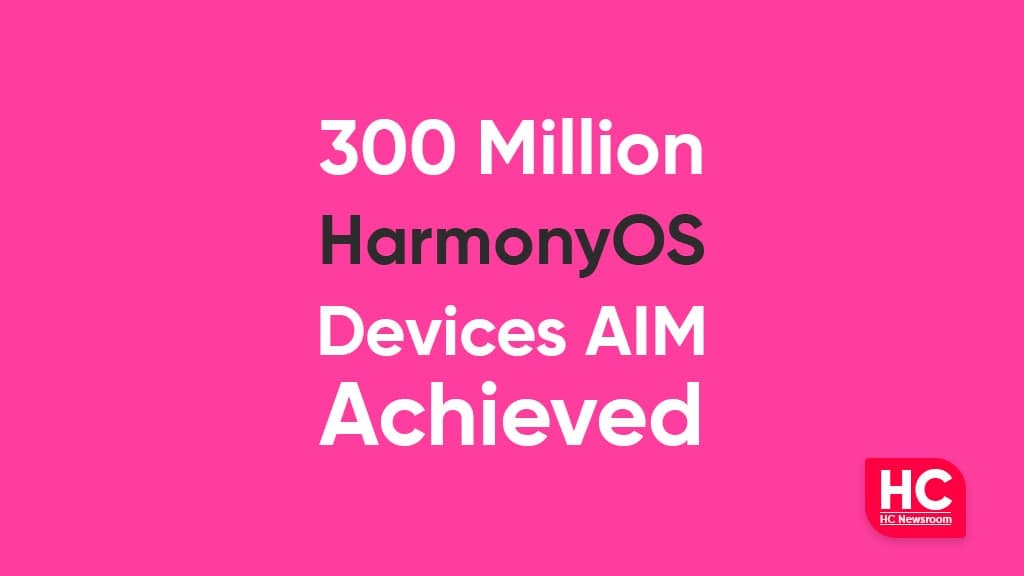 On December 23, 2021, Richard Yu, CEO of Huawei Consumer Business Group announced that HarmonyOS has crossed 200 million devices in the ecosystem. However, that’s not it, the Chinese tech maker has also achieved another milestone by gathering 100 million third-party consumer products from industry partners, making HarmonyOS reach 300 million.

Richard Yu mentioned that more and more users will join the HarmonyOS ecosystem and further strengthen the era of the internet of everything. However, the success of this operating system lies in its offerings, which include the ability to run the lowest possible memory device such as 128KB.

On the other hand, the features and user interface of the HarmonyOS come with major changes as compared to EMUI 11. These changes are alluring every of the existing Huawei smartphone user to upgrade over the new operating system and take the advantage of its latest offerings.

Aside from Huawei devices, the 300 million HarmonyOS devices mark is greatly contributed by the Chinese hardware and component makers that inherited the operating system and its IoT powers with HarmonyOS Connect.

Unveiled on June 2, 2021, HarmonyOS is developed solely by Huawei and later it was open source and donated to OpenAtom foundation in China that manages its code.

Ahead of this, Huawei and its top officials have mentioned much time that the company will surpass the 300 million HarmonyOS device mark by this year. One of these officials includes Wang Chenglu, Huawei Consumer Department Software President.

In October this year, Wagn announced HarmonyOS has been installed on over 157 million devices, while the third party device has been ramped up to 60 million units. Wang mentioned that the company will surely add over 100 million devices by the end of 2021.

Furthermore, there are over 1800 hardware ecosystem partners have joined this Huawei platform. Furthermore, the product categories have achieved 4000 counts in terms of the official certificates.

These 100 million HarmonyOS devices have been launched in various categories including smart home, sports and health, smart travel, audio-visual entertainment, education, office, and others.

Initially, Huawei has introduced HarmonyOS for flagship smartphones but the company has showcased a big upgrade roadmap for the exiting devices that includes a bunch of the oldest possible devices.

Recently, Huawei has completed the entire rollout plan for the listed models (check here). These devices have been a part of the entire Huawei smartphone ecosystem and have strengthened the rollout process. 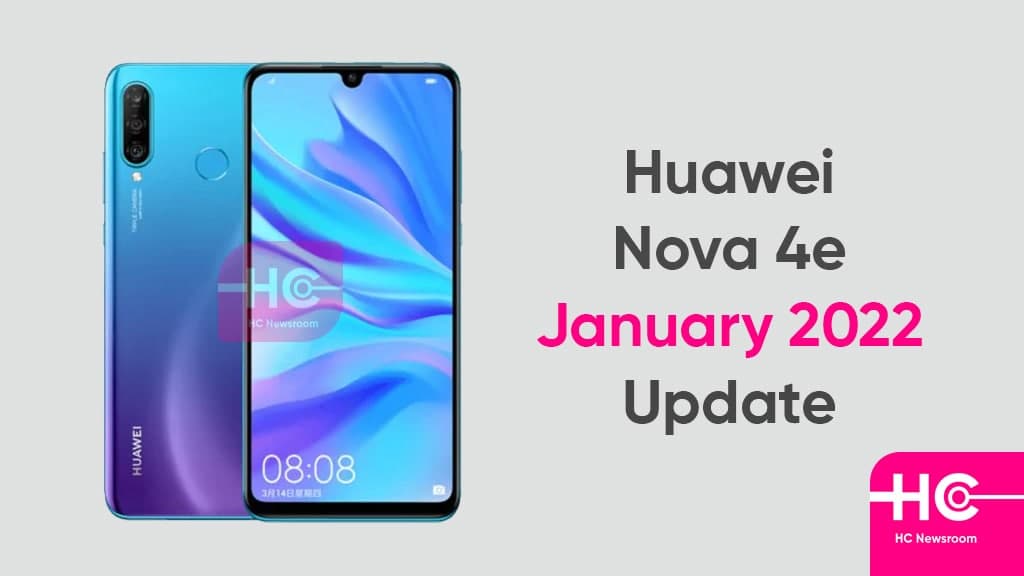 The latest January 2022 HarmonyOS software update is rolling out for Huawei Nova 4e smartphone users. This update mainly installs the security patch released in January 2022, which safeguards the device against common threats.

Huawei Nova 4e January 2022 software update comes with firmware version HarmonyOS 2.0.0.211 upgraded from 2.0.0.210. With the installation of this update, the overall security and performance of the device will be improved.

So, what are the fixes with January 2022 HarmonyOS security update? Well, it brings fixes for 4 CVE in the framework, 10 CVEs in the system, and 5 CVEs in the application. Additionally, it also resolves 111 CVEs found in the third-party libraries.

For more information, users the complete changelog and other important information about the software package as well as its version information below.

To update, Huawei Nova 4e users need to open the phone settings, tap on system & updates, tap on the software update, and then check for updates. If an update is found on your device then hit the download button and install it.

While updating, make sure that your device is charged at least 30% and has enough amount of storage space for the update package. Also, if the update doesn’t appear on your device, please don’t be panic and wait for some time. Because the update is rolling out in batches and may take some time to reach you. 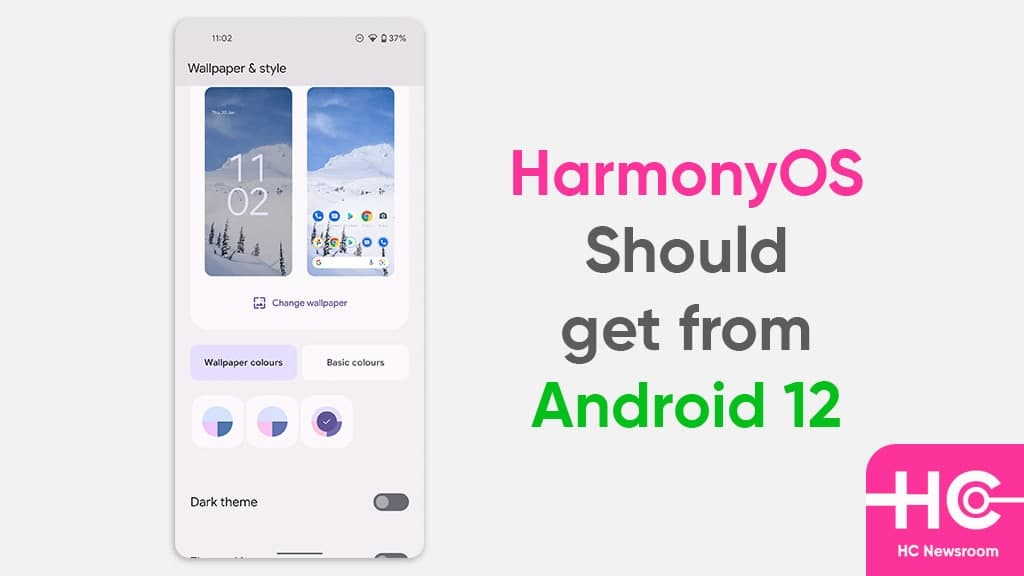 HarmonyOS comes with a bunch of new features that are built around the operating system and bring ease of accessing smartphone users. Therefore, you won’t have to worry about accessibility on this OS but there is one feature that Huawei HarmonyOS should be considering taking from Android 12.

So, what’s that one feature? Well, actually we’re talking about the dynamic color system powered by the Material You design. Although, the Material You on Android 12 has deep integration into the operating system but it’s worth mentioning that Huawei should adopt it on HarmonyOS for its consumers.

Android 12 is the latest installment from Google and many smartphone makers has already started shifting their smartphone to Android 12 but dynamic colors from Material You is the only feature that keeps them on the toe.

Going for the simple terms, the new feature system allows users to change the system colors and apply a better one. Most interestingly, it can adapt and generate color pallets based on your phone’s wallpaper, which is actually very cool.

There are two types of colors you can choose from:

These will lead you to the color palette generated from the wallpaper of your phone’s home screen including a Primary, an accent, and a Dark mode color.

These are solid colors that will be applied solely throughout the system.

Aside from the colors, the feature will let you customize the system icons that will be applied to the app icons. 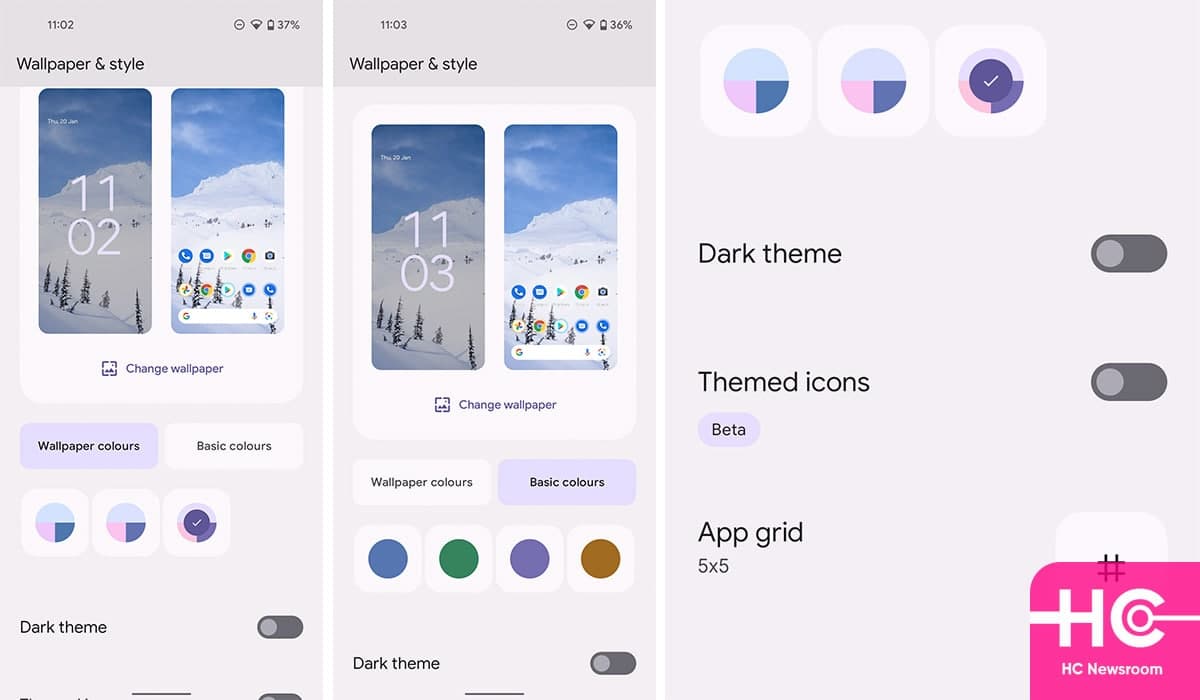 Where these changes will appear?

The change in dynamic colors will appear throughout the user interface and system including quick settings, dialer, app icons, Settings menu, and even in apps.

These changes in the user interface are surely amusing, even if Huawei cannot inherit the Material You design, it could add an extra flavor of customization with dynamic color themes. 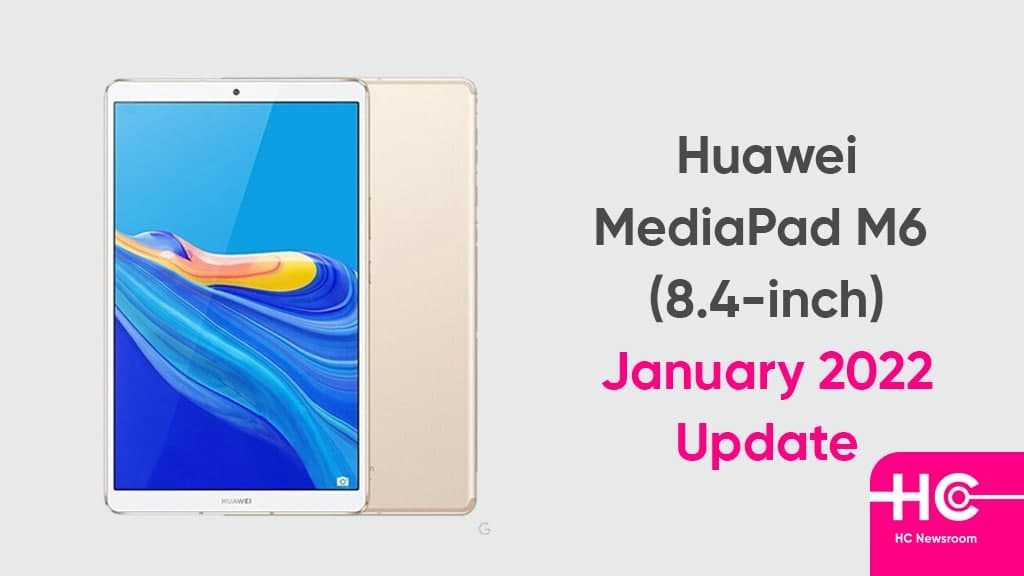 Huawei MediaPad M6 8.4 inch is grabbing the latest January 2022 HarmonyOS software update that comes with upgraded version 2.0.0.223. This update brings fixes for system features as well as installs the security patch to improve the user experience.

The January 2022 update for Huawei MediaPad M6 (8.4-inch) brings fixes for calendar notification issues and resolves the problem of an abnormal home screen display in some scenarios.

Adding to this, it also includes the January 2022 HarmonyOS security patch that fixes the different levels of common vulnerabilities and exposure to increase the security of the system.

For your information, the January 2022 security update fixes 4 CVEs in the framework, 10 CVEs in the system, and 5 CVEs in the application. Also, it also resolves a total of 111 CVEs found in the third-party libraries.

To download the latest update, Huawei MediaPad M6 users go to the settings, tap on software & updates, tap on software update and then click on CHECKS FOR UPDATE. Wait for seconds, while the device is connecting to the server and checking for updates. Once an update appeared on your device, hit the download button and install it ASAP.