WhatsApp has been working on a lot of features under its beta application and continues to bring them for the general users once the testing concludes to deliver a new user experience.

However, there’s one specific feature called – Multi-Device, which is under development for quite a time and WhatsApp developers have been quite optimistic to release it as soon as possible.

According to the latest information coming from WAbetainfo, the Multi-Device feature will initially be available for WhatsApp Web, WhatsApp Desktop, and WhatsApp Portal. This means users won’t be able to link a smartphone with another Android or iOS device.

The feature first decides to land on the above-mentioned platforms but it could also come on mobile devices as well. 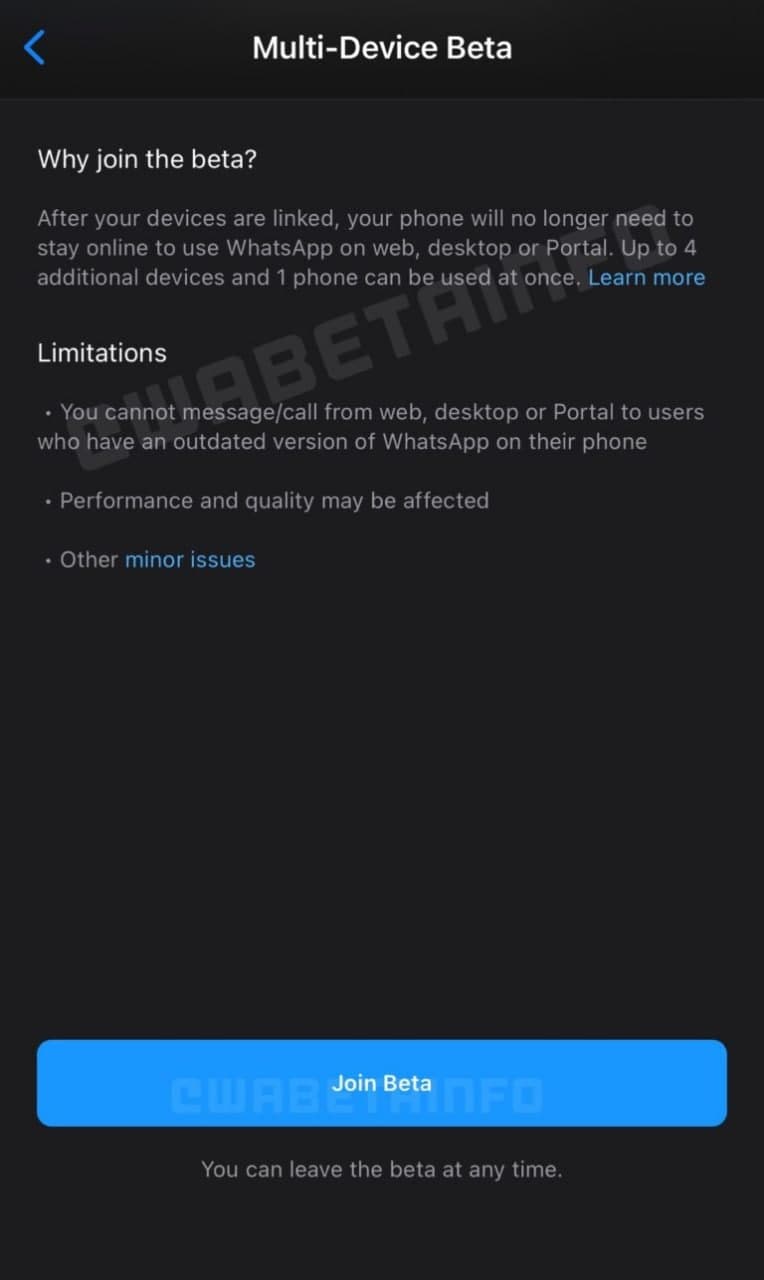 After your devices are linked, your phone will no longer need to stay online to use WhatsApp on the web, desktop, or Portal. Up to 4 additional devices and 1 phone can be used at once.

However, a user cannot message/call from the web, desktop, or portal to users who have an outdated version of WhatsApp on their devices, and performance as well as the quality of the content may be affected after on different platforms.

More information about the Multi-device feature is yet to come, so stay tuned… 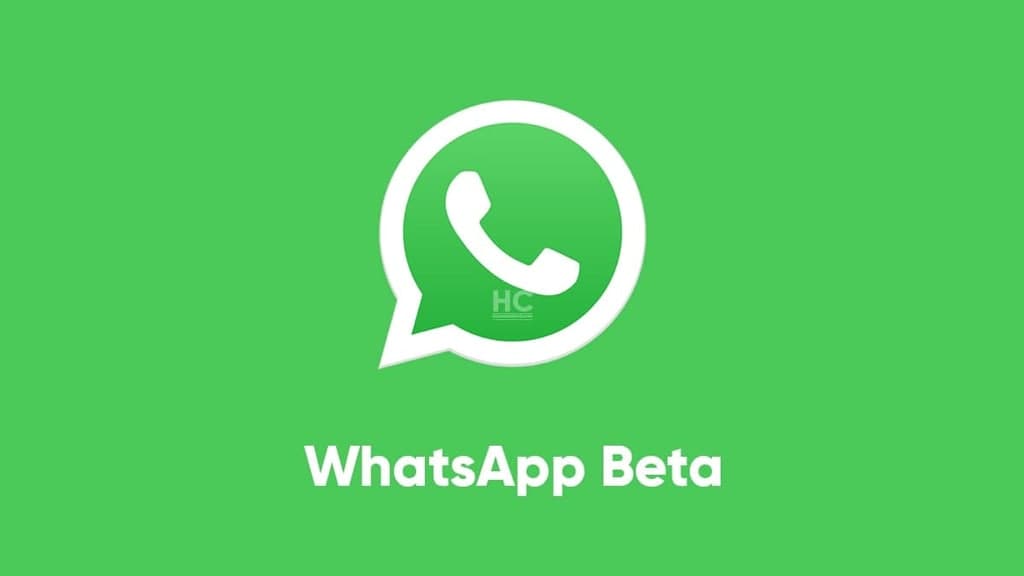 WhatsApp rolled out the end-to-end encrypted backup feature for Google Drive to protect the privacy of a user from unauthorized access. Now, the latest information revealed that the WhatsApp team is developing the same feature for the local storage backups on Android as well.

To be mentioned this feature is currently under beta testing and may arrive as a stable update with future versions of WhatsApp.

As per the information, this feature backs up the WhatsApp history on your Google drive that can be restored in the internal storage of smartphones when a user reinstalls the app.

However, there are many things that are still unclear such as, do the local backup runs in regular intervals, when will it come, will it release for iOS too, etc. For now, let’s see what is the end-to-end encryption backups. 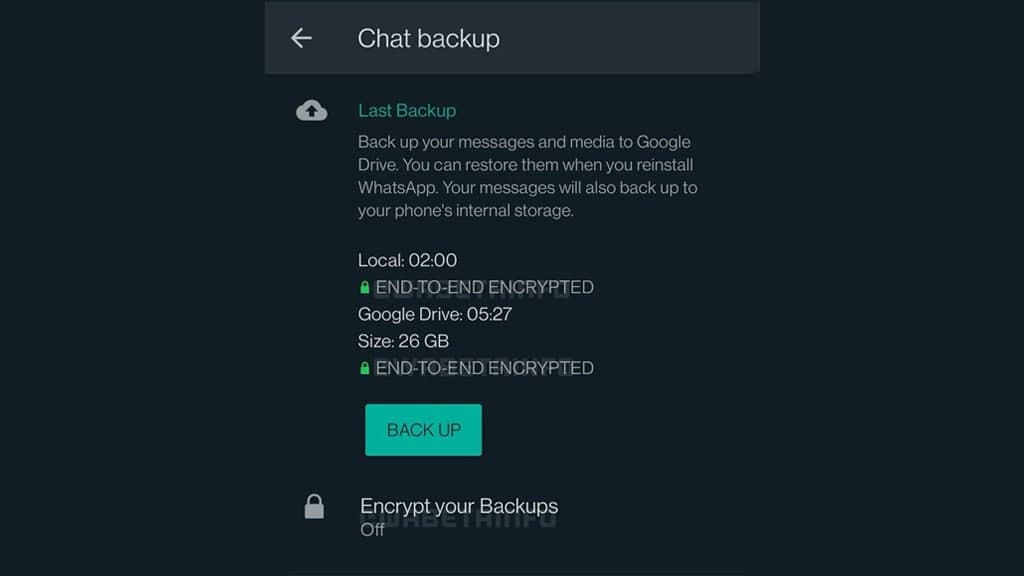 The end-to-end encryption allows the users to set a security key consisting of numbers and lowercase from “a” to “f”. Only after entering this key, a user is able to access their backups from Google Drive. The only thing to remember is that, if a user forgot the security, WhatsApp won’t be able to help them to reset it, which is necessary to restore chat history.

Not a long ago, WhatsApp send the WhatsApp HD Photos options on iOS and Android devices. This feature offers three options- Auto, Best Quality, and Data Saver to decide the quality of an image that is being sent by the user.

These options can be found in WhatsApp Setting > Storage and Data > Media Upload Quality. However, as this is a beta rollout, so there is room for further changes, stay connected to get more news.

The iOS users, who registered themselves for the beta TestFlight can enjoy the HD Photos option on their devices on WhatsApp. It offers three options for the users to select for the image quality they want to send.

It’s notable that, last week WhatsApp release the same feature for Android users also. However, keep in mind that this is the beta rollout and WhatsApp can make further changes to bring more convenience.

This new option will allow the users to select the quality of their images considering their data plan, it offers three options- Auto (recommended), Best Quality, and Data Saver. Talking about all these options the following things are considerable- 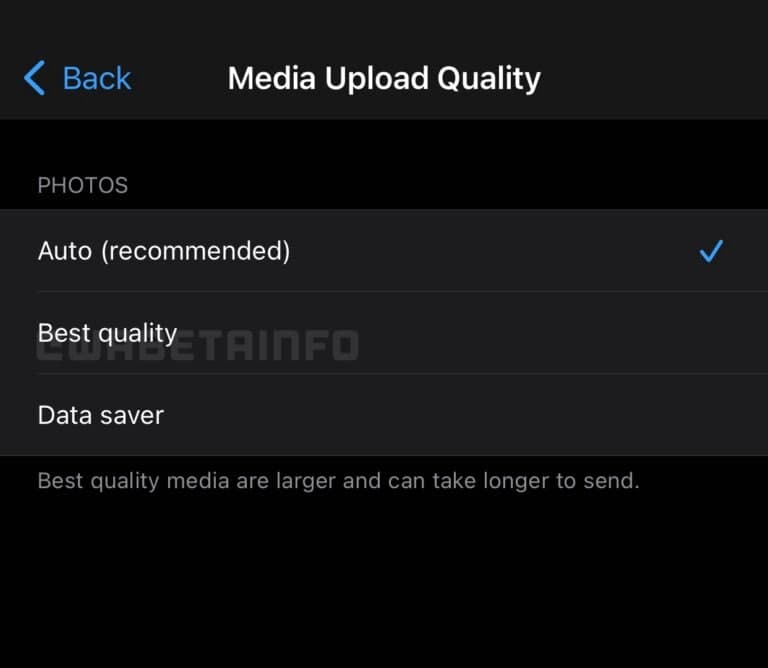 The users can find this feature in the function called Media Upload Quality, which can be found by following the below-mentioned steps-

The remaining devices will also begin to receive this function by the next week, so no need to worry if this feature is not enabled for your WhatsApp account yet.

The WhatsApp Multi-device feature has been released for iOS users through the TestFlight beta program. Now, the Whatsapp iOS registered beta tester can upgrade to 2.21.150.11 via downloading it from the App Store.

The new Multi-device beta features allow the users to use the WhatsApp Web or WhatsApp Desktop without using the internet connection on the iPhone. Furthermore, the users can connect up to four devices simultaneously.

Additionally, the users can have the end to end conversations in their contacts that won’t be stored on the WhatsApp servers instead it will be sent to all devices or to be precise laptops, PC and tablets connected with the smartphone.

As this is the initial beta push, the users can connect to one smartphone only. Besides, you have to check if this feature is enabled on your device or not in order to activate it. 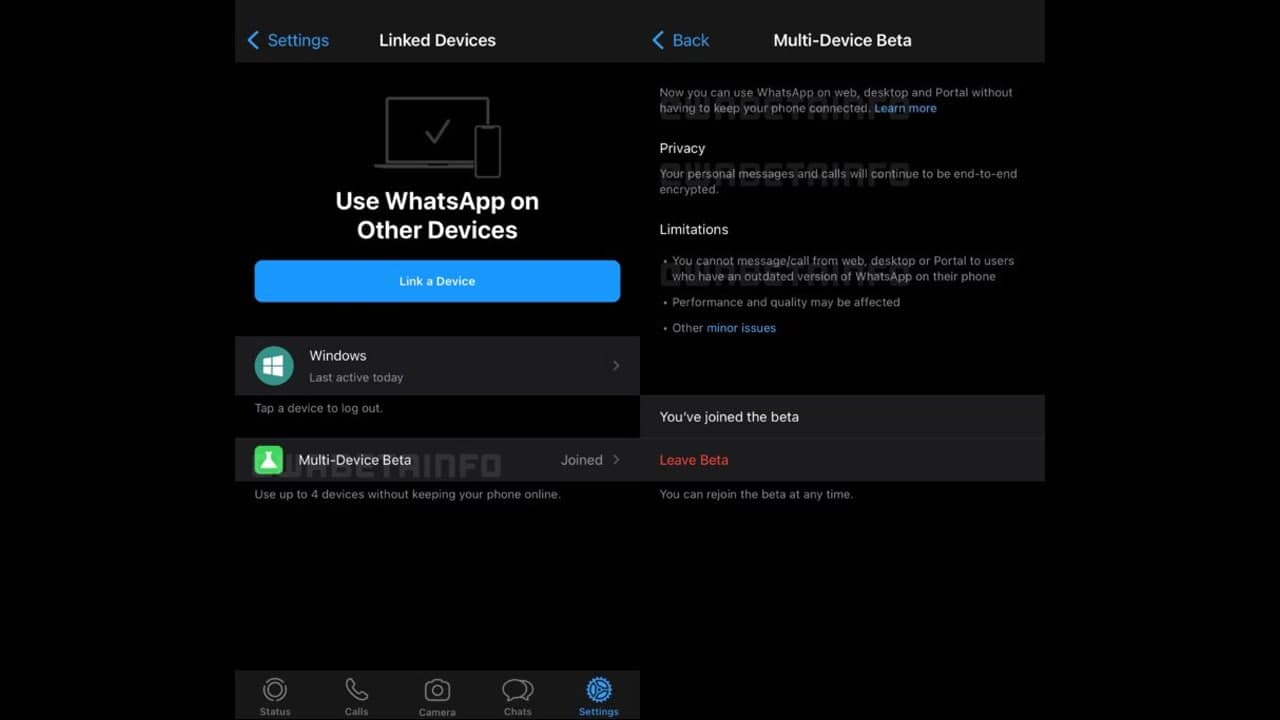 This new feature is still rolling out for iOS users in the stage manner. Besides, the selected users will get the features first, so it can take some days even weeks to reach your devices, until then wait patiently.