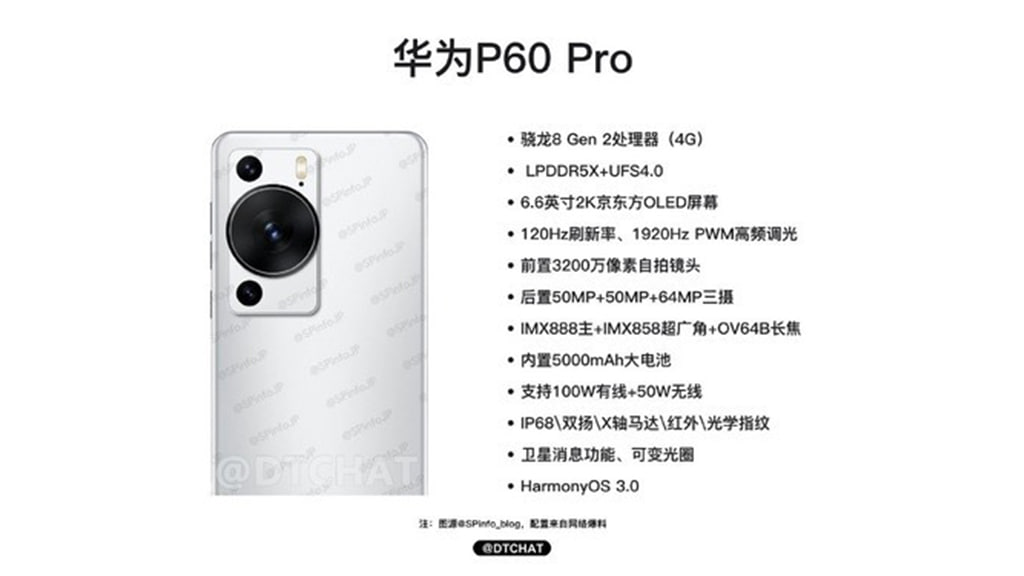 The third Huawei P60 Pro specs sheet based on past leaks and information has appeared online, showcasing the parameters that claim to show information about RAM, chipset, display, camera, battery, and more.

Diving into the specs sheet, it shows Huawei P60 Pro to equip with a second-generation Qualcomm Snapdragon 8, the most powerful core of Qualcomm so far, but with only a 4G network. The phone is shown to feature LPDDR5X RAM and UFS 4.0 flash memory. Meanwhile, you should know that Samsung LPDDR5X 8533Mbps memory can only support a maximum rate of 8400Mbps.

In terms of camera, the Huawei P60 Pro’s main camera is a 50-megapixel IMX888, which supports OIS optical image stabilization. The other camera has a 50MP ultra-wide and 64Mp zoom camera. There’s a 32MP selfie camera to take front-facing photographs.

Similar to past predictions, Huawei P60 is rumored to pack a 5000mAh battery with a 100W charger. This combination is very unlikely, as the phone could bring a 4700mAh capacity with an 88W charger.

The phone could be IP68 certified with water and dust resistance. The phone is shown to be powered by HarmonyOS 3.0 operating system with a variety of new smart features. A report reveals that the phone may use HarmonyOS 3.1 instead of HarmonyOS 3.0. 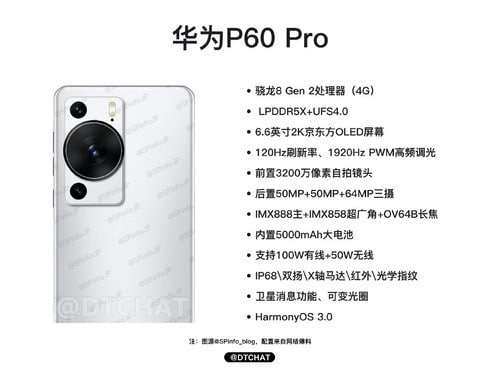 Weibo Tipster, Classmate guan reveals that this is the closest prediction for the P60 Pro specifications but there are more surprises waiting for us. The tipster emphasized that Huawei P60 Pro will focus on the camera, and it will also provide new variable aperture technology along with satellite communication.

Also, the Huawei P series will mark the entrance of the XMAGE imaging system, as it already debut with the Mate 50 series last year. Huawei P60 series is tipped to release in March this year, and we will keep you posted with the latest news about this upcoming flagship.