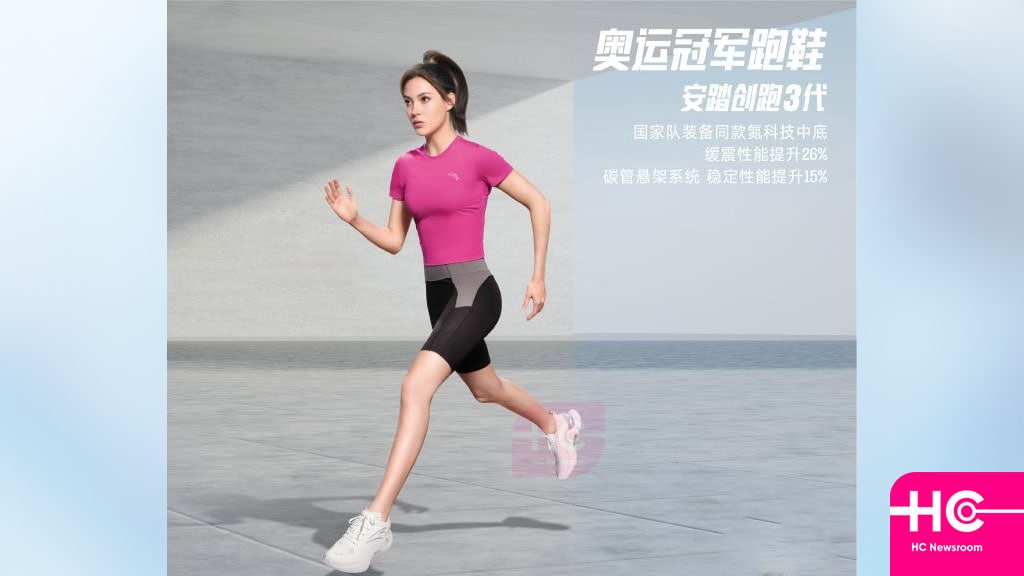 Huawei Sports Health cooperation has shaken its hands with Anta Sports Science Laboratory to demonstrate the all-new champion running shoes. Both the parties will investigate the improvement as well as the efficiency of the new product.

You might be knowing that the Huawei Sports Health app is an overall health-oriented service. The app retains a place on your smart device to let you know the accuracy of your health and provides you with a definitive report. However, on the side hand, the company also goes through various health and sports-related equipment to provide the users with a productive experience.

In the latest section, Huawei Health firm and Anta Laboratory together, are checking the cushioning performance of the champion running shoes. Both the parties are ensuring that the new shoe product must have an increase of 26 percent in enactment grade.

Further, the companies will also tally the stability of the product. As per reports, it must be more than 23 percent over the previous generation. This gives us the hint that the new shoes are digitally supportive and can ultimately enhance the experience of walking, running, and other activities. 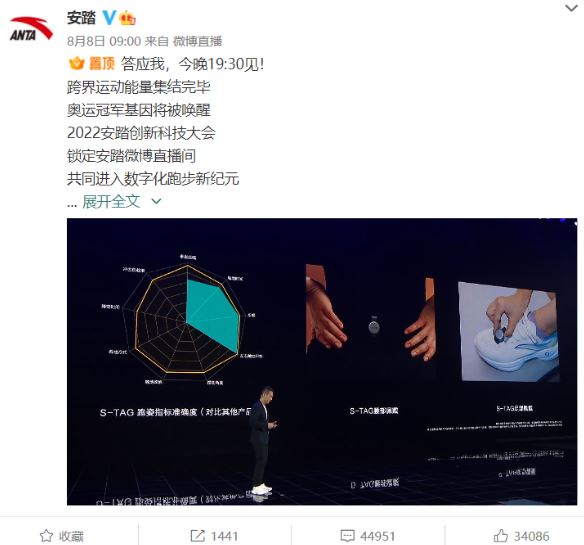 Alongside, the shows can easily combine themselves with the Huawei S-TAG. Thus, users will seamlessly get an idea of their running posture, and other walking habits. Alternatively, it will fulfill all the requirements of the athletes in the time ahead.

Consequently, this will give rise to more innovative and scientific health products. As a result, users will be able to enjoy advanced technology in their hands with simple and easy-to-use operations.

Well, this is just the starting, and ANTA revealed that it will continue its collaboration with Huawei for sports equipment purposes. 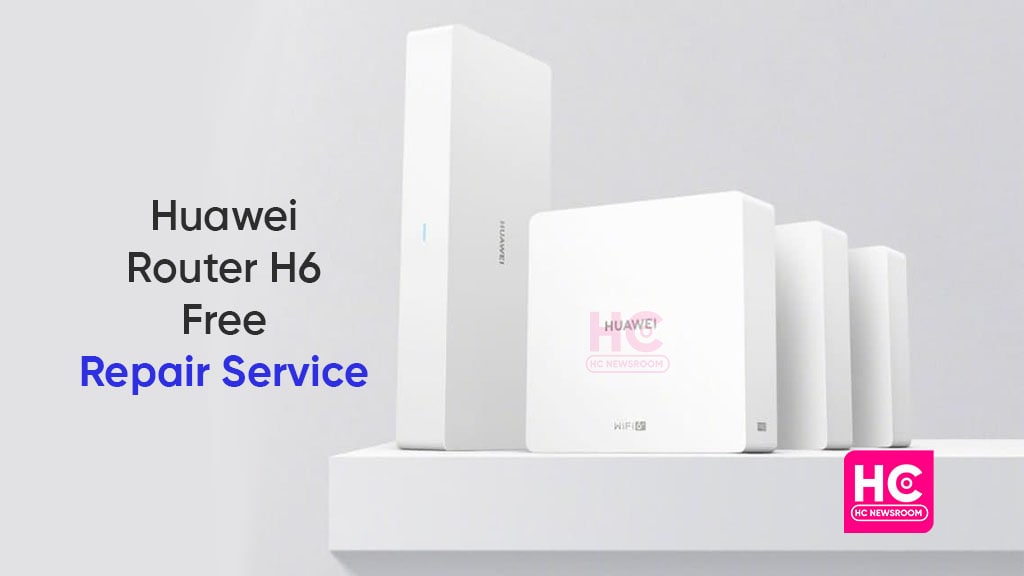 Huawei believes in the fact that keeping customers happy is directly proportional to the growth of the company. And, it constantly offers new benefits and services to its users. In the latest edition, Huawei has availed the router H6 repair and replacement services for free of cost.

To those who are unaware, Huawei router H6 is a useful Wi-Fi modem that came into existence from April to July 2021. It packs the HarmonyOS system. Besides, it supports Huawei Mesh+high-speed networking, Wi-Fi 6 protocol, management of the Huawei Smart Life App, three WiFi signal strength modes, and more.

So far, Huawei acknowledged that some router H6 users are facing some problems while turning on the device. Ultimately, the Wi-Fi router does not respond when a user tries to switch it on or perform any other action. Hence, to relieve the users of this stress, the company has offered the benefit of free repair and replacement services.

According to the shared post and image of the well-known Weibo blogger @KanshanUncle, Huawei sent a pop-up message to the router H6 users concerned with the replacement services:

“Dear Huawei H6 users, we found that some H6 products produced between April and July 2021 may have problems that cannot be turned on. You can make an appointment to go to the nearest Huawei customer. The service center will provide free maintenance and free replacement services. Or, call Huawei’s customer service hotline at 950800 to make an appointment for free on-site maintenance services.” 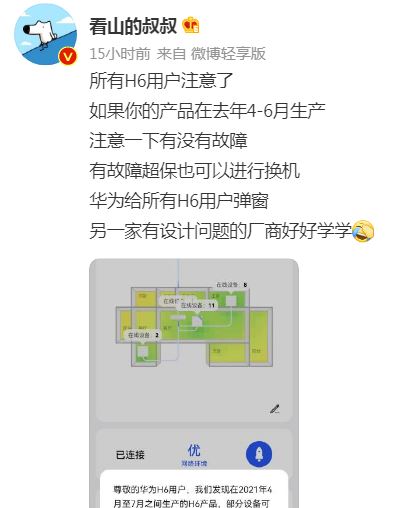 So no need to worry more. If you are having an issue with your WiFi router H6 then follow the path of the Huawei service center and repair it for free.

As already mentioned, Huawei router H6 relies upon the HarmonyOS system. It exhibits long-lasting and easy-to-use features. Moreover, it has three modes: the sub-router standard version, the sub-router Pro version, and the 1 parent 3-child set version.

It adopts a Gigabit Ethernet port design and sends optical fiber broadband to each room through a network cable. Alternatively, it can easily solve the problem of large-scale Wi-Fi coverage. As a result, users can enjoy high-speed and stable internet connection. 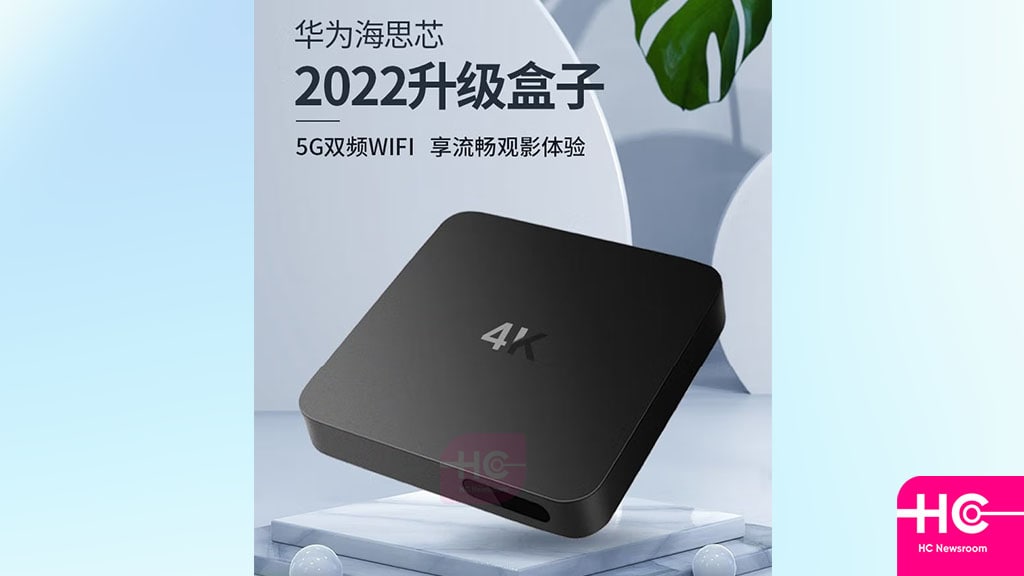 Huawei has introduced a huge bundle of smart gadgets in recent times. This bundle has included every type of device in it, ranging from smartphones to smart house products. Currently, the company has featured a new 4K TV set-top box, equipped with Huawei HiSilicon chips at just 88 yuan [12.71 USD].

Unlike other TV boxes, the Huawei 4K TV set-top box powered with HiSilicon chips offers numerous benefits at an affordable price. Besides, it brings support to several advanced techniques, that a normal box could not exhibit on its surface.

Since the respective TV box uses a HiSilicon 378MV310 chipset in its core, the device gives a high-power performance. It features 4K/60fps (frames per second) HDR video decoding and DTS audio decoding.

Alongside, it also has a 5G version and bears a 5G frequency band with a Wi-Fi channel. Moreover, it has an in-built Wi-Fi transmitter on the motherboard. Consequently, this maintains the stability and transfers the network in a faster mode. 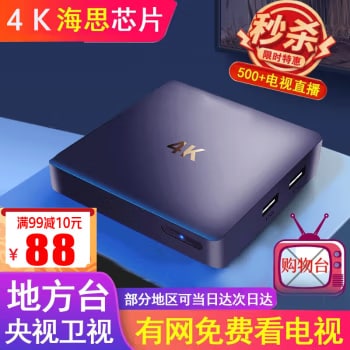 The ultimate product let you watch more than 3000 TV programs with 0-month rent. Yes, no extra charges for enjoying the entertainment package of your choice. Further, the content appears in HD resolution and does not interrupt your joy with unnecessary advertisements.

Speaking of the supporting features, the highly rated set-top box carries the capability of several functions. For instance, it supports 7-day high-definition playback, CCTV full set, and satellite TV programs playback. So, if you missed any of your favorite shows or series then don’t worry, as you have time to watch them later.

You will also find smartphone screen projection, the new HDMI interface, and the old AV interface. Hence, you can watch your favorites in every manner, and with any kind of television model. All you need is a suitable internet connection.

The most interesting point is that these all features are available at just 88 yuan [12.71 USD] on the familiar online shopping platform – JD.com. So jump on the below-given link and take a test drive of this new device.

Apart from the supporting skills, this TV box can let you install all types of television software. Such as Tencent Video, iQiyi, Youku, various audio and video APPs, live broadcasts, and so on. Thus, you get a lot of sectors to explore with the new set-top box. 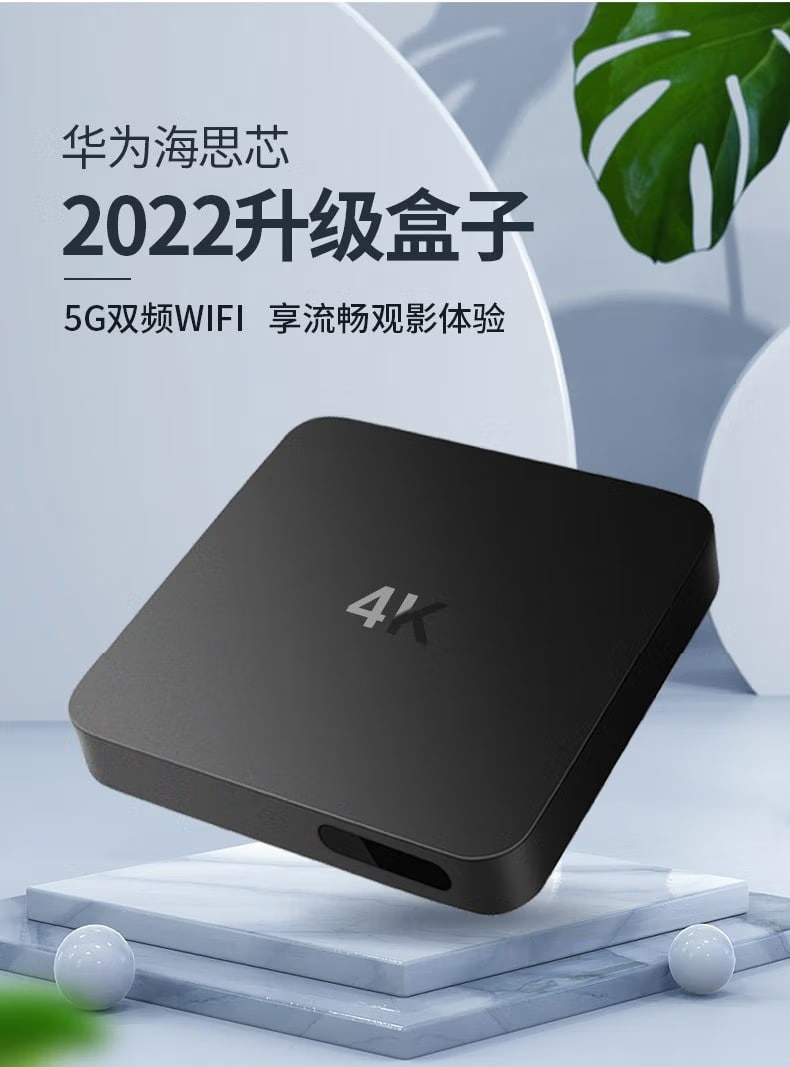 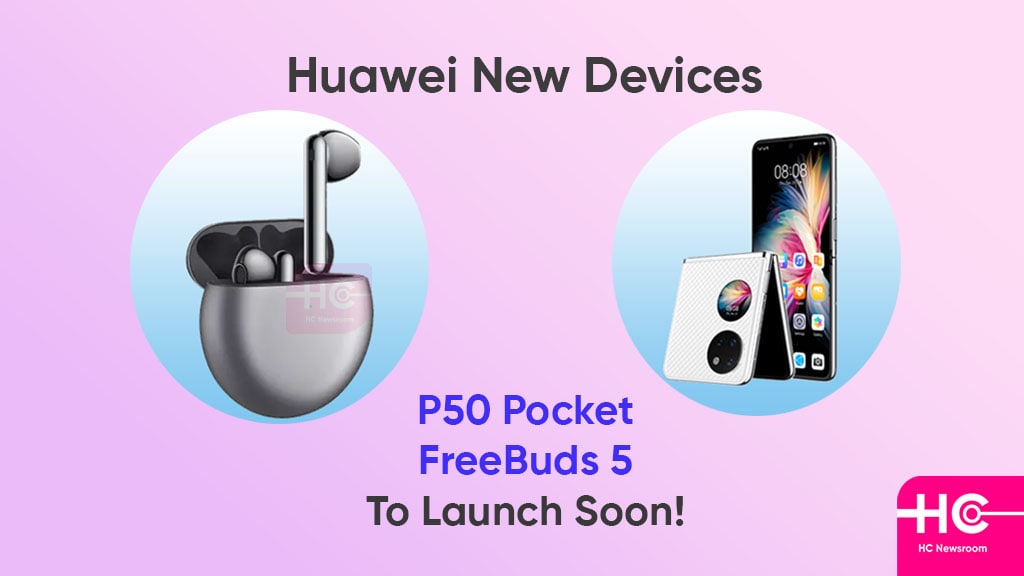 Huawei has just marked the end of the iconic Mate 50 series launch event. However, without relaxing for a minute, the company has begun hammering its tools on the next revealing products. As per the reports, Huawei will keep surprising its consumers this year with the new P50 Pocket and FreeBuds 5 devices.

Huawei fans would have considered the Mate 50 lineup as the gigantic model of the company this year. But who knows, what new plans the Chinese tech maker is cooking in its head to amaze as well as widen the eyes of its consumers.

The piece of information flows from the Weibo blog of the very famous tipster – @FactoryDirectorShiGuan. According to his reports, the next three products that we might see this year are Huawei P50 Pocket, Watch GT 4 series, and FreeBuds 5.

Although, the company hasn’t brought any specific statements regarding the release of these devices till now. Yet, witnessing the timeline of the launched products, there are chances to grab these models in the upcoming month – October. 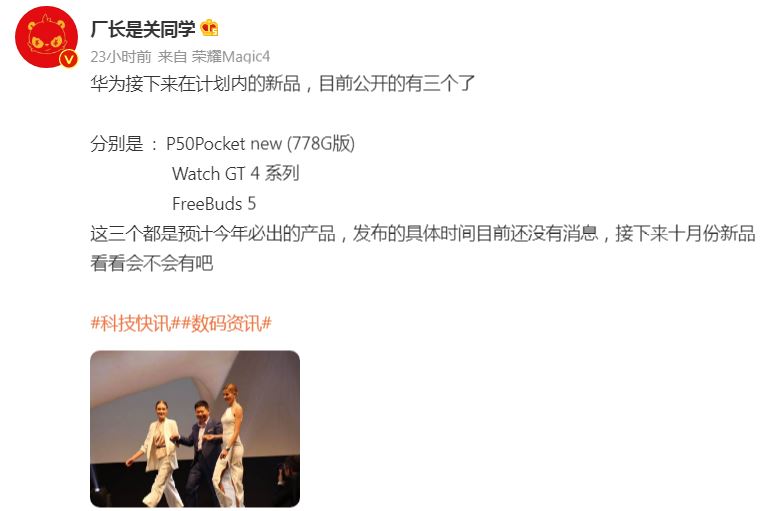 While we were busy catching the first glimpse of the Mate 50 models, the intelligent analysts of Huawei bring up the tweak of a New P50 Pocket color variant, spotted on the TENAA site. But at that moment, the details were not clear to the users.

Throwing some light on the flip-flop model, the blogger has mentioned that the new P50 Pocket will appear with the 778G version. Ultimately, it might equip the Snapgradon 778G processor on its core surface. Though we can’t set a line about the new features that the device will bring. But it could highlight some traits of its other P50 Pocket members.

The Chinese manufacturer has recently launched the FreeBuds Pro 2 headsets for its native users. And now, we could receive a new FreeBuds 5 Edition in the upcoming days. Speaking of the FreeBuds lineup, Huawei keeps on bringing better and more unique audio quality. However, let’s see what the company will pack with FreeBuds 5 to impress its users.

Things are still running on the platform of speculation. Will the company unveil these high-end devices or the Mate 50 series will remain at the top this year? Well, only time can give a better answer to this question.