Throughout the third quarter, Huawei rise as the only company to see double-digit growth in the global smartphone market, says a market researcher.

According to the data compiled by Gartner, Huawei in the third quarter sold 65.8 million smartphone units, with 17.0% market share and 26% YoY growth. During the same timeline last year, Huawei sold 52.4 million units with a 13.4% market share.

Note: The above report includes sales count from both Huawei and its subsidiary Honor.

In the list of top smartphone makers, Samsung comes on top with 79 million smartphone shipments, a 20.4% market share, and 7.8% annual growth. Apple comes third with 40.8 million units, 10.5% shares and an annual decline of 10.7%.

In a domestic report from Canalys for Q3 2019, Huawei reached over 40% of the smartphone market and the only smartphone maker to catch business growth.

“Huawei’s strong ecosystem in China continued to show growth. The current situation with the U.S. has also fostered patriotism among Huawei’s partners, which are now keener to promote its smartphones in China — a development that makes it difficult for local competitors to compete aggressively against Huawei.” said the researcher.

“Huawei’s long investment in subbrands (Honor and Nova), in multichannel operations (online and retail), and in 5G and other technological innovation forms the basis of its success in China.” said the researcher.” It added. 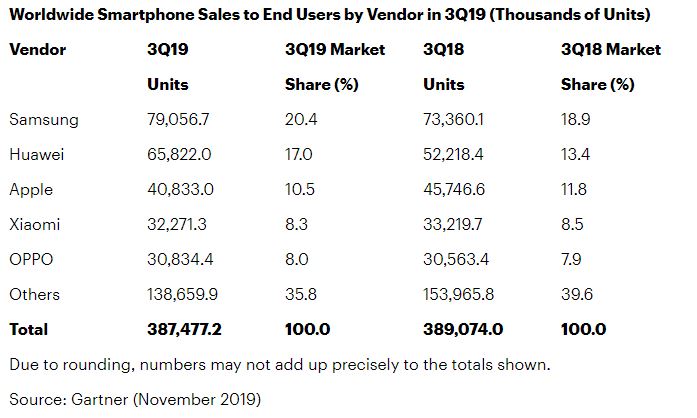 Advertisement
Related Topics:GartnerHuaweiQ3 2019smartphones
Up Next