While the smartphone market is experiencing serious declines, there’s one smartphone company named – Huawei that continues to thrive globally and surpassed its own share record in a single quarter, as well as beaten Apple again.

According to the data compiled by IDC, Huawei has now owned a huge part of the global smartphone market share and reached its highest market share in a single quarter.

Huawei accounted for 19% of the global smartphone market share in the first quarter of 2019, compared to 11.8% in the same time span last year. The company has gained a whopping 50% Year-Over-Year growth, which is boosting its position in the smartphone world.

For the shipment, Huawei has shipped 59.1 million smartphone units in the first quarter compared to 39.3 million units in the Q1 of last year. With this graph, Huawei has dethroned Apple for a clear 2nd spot in the list of top smartphone vendor and closing its distant with Samsung.

Apple beats Huawei to remain the world’s No. 2 smartphone maker in 2018

In China, Huawei continued its domination with a well-rounded portfolio targeting all segments from low to high. Huawei’s high-end models continued to create a strong affiliation for the mid to low-end models, which are supporting the company’s overall shipment performance.

Huawei with its subbrand Honor is dominating the global smartphone faster than its competitors and with this pace and shipment volume, the company will soon complete its goal to dethrone Samsung for the first place. 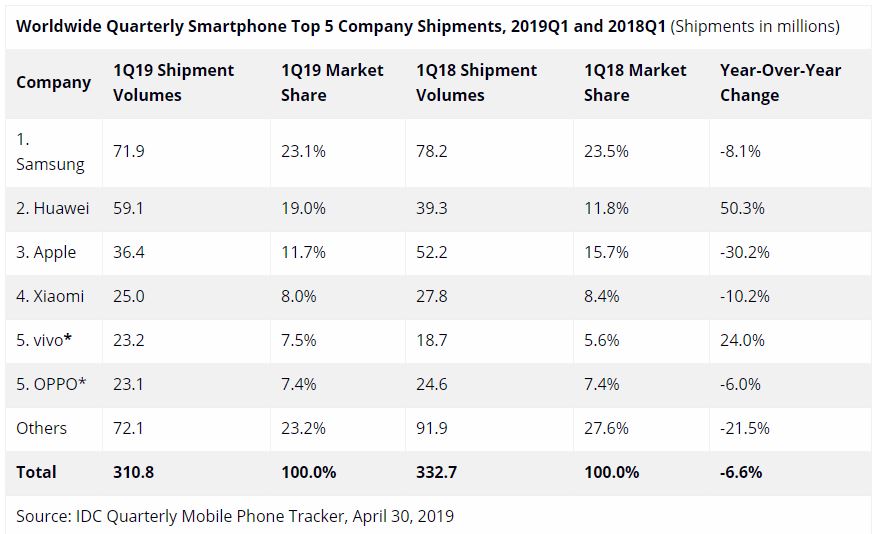