HarmonyOS 2.0/Hongmeng 2.0 beta will debut on the mobile under the developer program and the company has officially started to warm up the HarmonyOS 2.0 mobile beta launch on December 16.

Now, there’s some new information coming from Weibo tipster – CourageDigitalKing, which reveals that Huawei has already started distributing HarmonyOS 2.0 beta on smartphones. While the initial user interface reflects the same user interface as the existing EMUI 11. 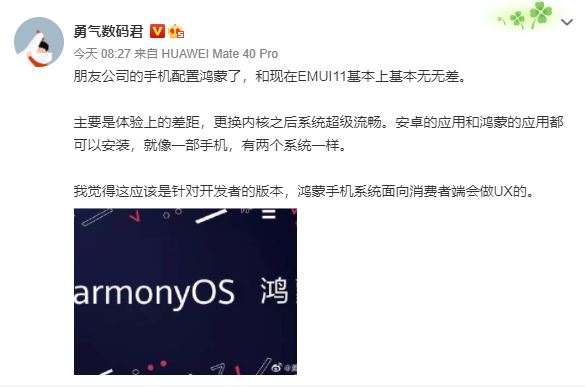 However, the main difference reflects in the overall performance of the system, which is now smoother after replacing the kernel. Also, one of the most interesting things that the tipster suggests that HarmonyOS 2.0 will be able to run Android apps and HarmonyOS apps in the same system to provide a 2 in 1 operating system.

Furthermore, Huawei this information and changes mentioned above could be related only to the developers and there are more insights that we’ll find officially at the launch event or actual developer beta build.