Huawei’s next flagship processor – Kirin 985 is already on its way to be launched in the second half of this year, until then the Kirin 980 is still a one and only SoC to power Huawei’s powerful flagships.

A few days ago, chief editor of Xdadevelopers, revealed model numbers of the upcoming Huawei and Honor phones and tablet that will be powered by Kirin 980 processor. These details include device’s model number, display size, battery capacities and camera setups.

There are a model number AL00 & Al09 and SCM has 8.4 and 10.7-inch screen sizes respectively, which should be Huawei MediaPad M6 tablets.

These tablets have a flat display with a resolution of 1600×2560 and will include 4200mAh and 7500mAh battery capacities.

There’s also a model number SEA-AL10 that has a 6.39-inch FullHD+ display, 3500mAh battery, and 25MP selfie camera along with 48MP IMX586 main camera sensor. This phone is expected to be Huawei Nova 5 smartphone as the company has finally decided to bring more power into Nova series phones.

And lastly, there are Honor 20 and 20 Pro devices with 3750mAh and 4000mAh battery life. Both of these phones are officially confirmed and will be launched on May 21.

Currently, Huawei Nova 4 is powered by Kirin 970 processor, and the flat-panel MediPad M5 series uses Kirin 960. The adaptation of Kirin 980 processor will bring more performance improvement to the Nova series and the MediPad tablet series. 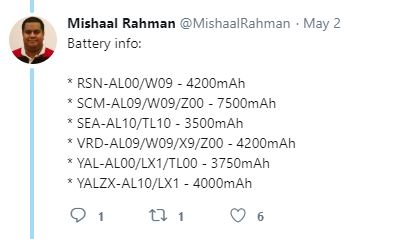