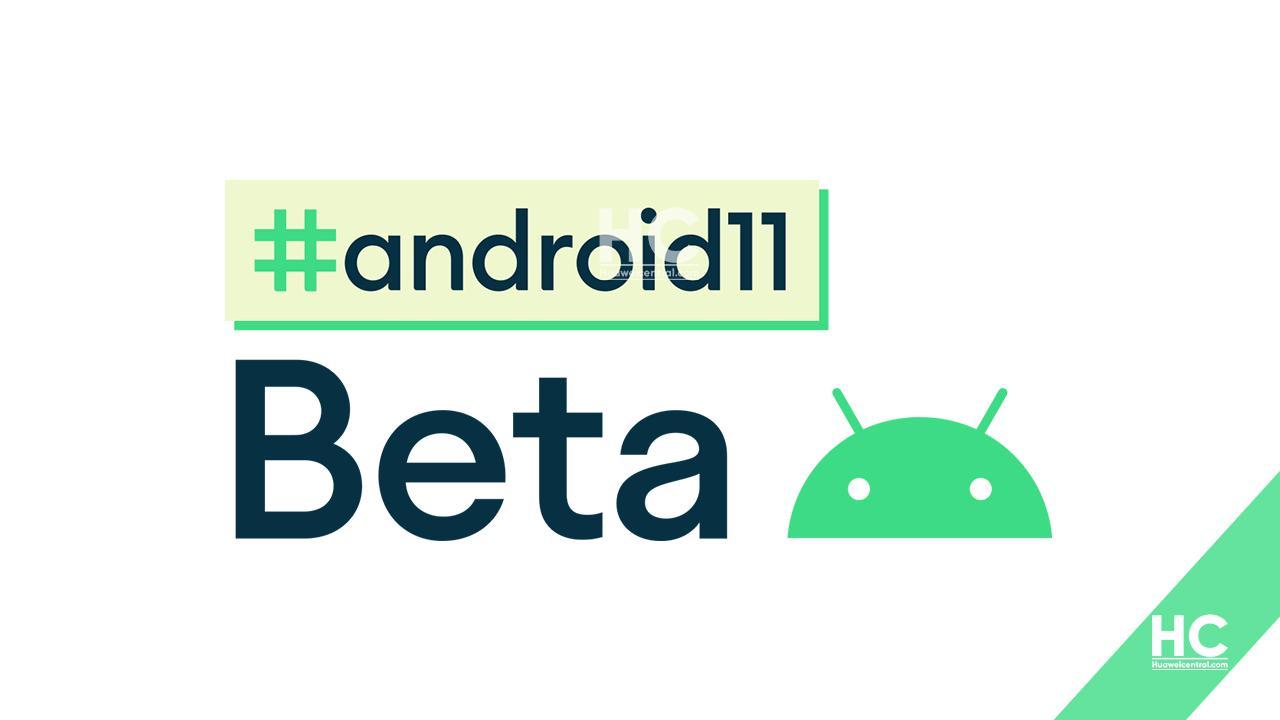 The first beta of Google’s Android 11 introduced a number of new features such as people-centric features, smart device controls, and new privacy options. By moving forwards to its launch in the Q3, Google today pushed the second beta of Android 11 with Platform stability.

According to Google, Android 11’s second beta has achieved a new milestone “Platform Stability”. This means that the final version of Android 11 will not be much of different compared to Android 11 beta 2.

What is platform Stability?

Platform Stability means that all app-facing surfaces and behaviors are now final in Android 11. This includes not only final SDK and NDK APIs, but also final system behaviors and restrictions on non-SDK interfaces that may affect apps. So from Beta 2, developers can release compatibility updates with confidence that the platform won’t change.

Although, Google has not published the information regarding the changes made into this new beta but 9to5Google has explored this latest software addition and found the following changes in the system. 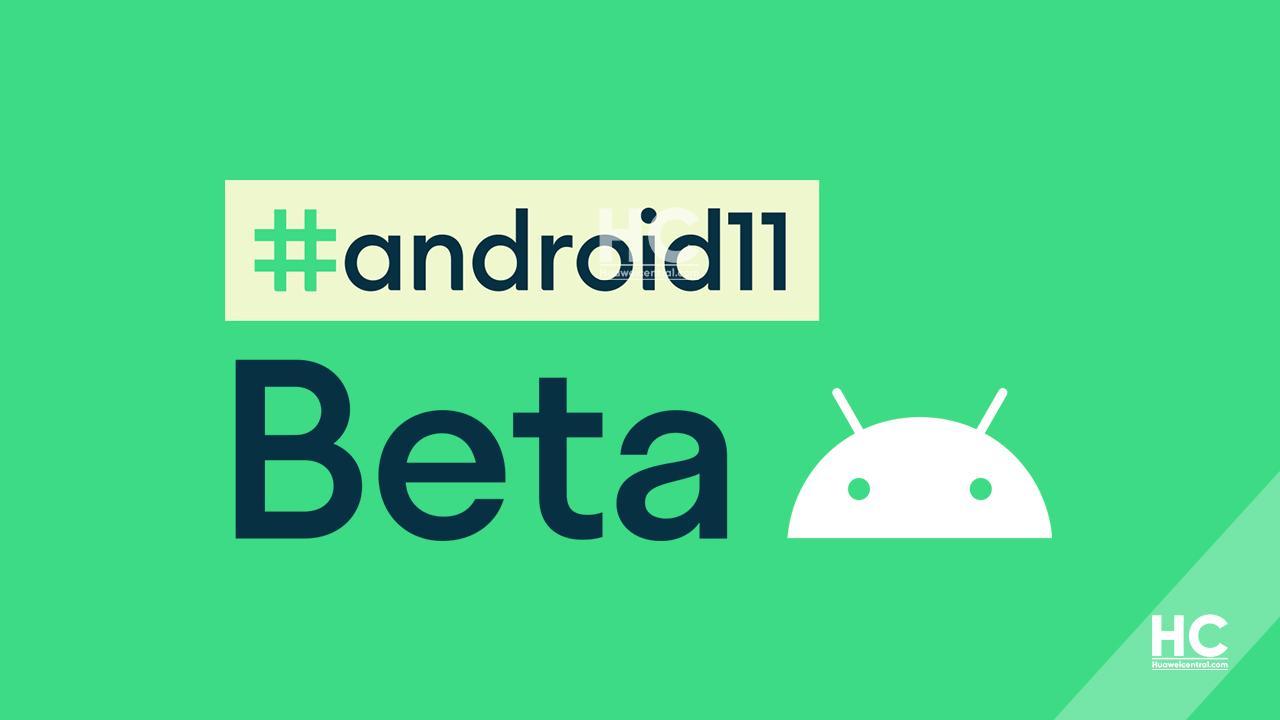 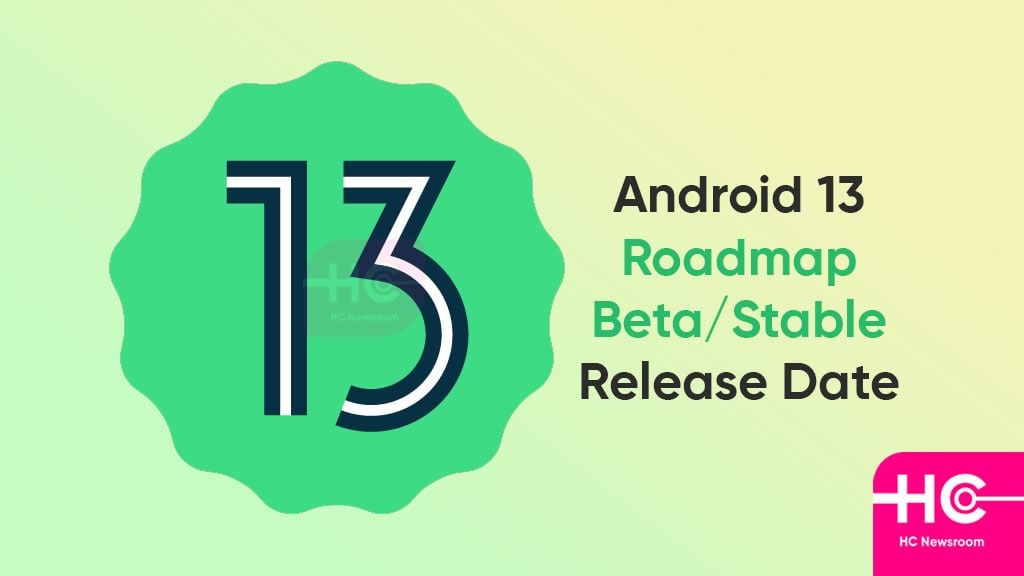 Google fans are eagerly looking forward to tasting a new experience with Android 13. But seems like the consumers have to wait till September. That gets clear on the official page of Google that reads the release notes and details of the upcoming version of Android.

Android 13 is about to launch: Google

Today, Google has officially confirmed that Android 13 is about to launch. The announcement came via the official developer blog simultaneously rolling out Android 13 beta, the final beta OTA ahead of the stable release. Read More

Android 13 beta 3 has started rolling out, and soon Google will confirm the release date of the respective software with a stable version. However, new features with the beta updates are alluring the users to experience stable and complete firmware.

Up to this point, Google has served two developer previews and four beta updates of Android 13. A few days back, the US manufacturer pushed off the third beta of Android 13, intended for Pixel users. After the accomplishment of a stable beta, the company will surely roll it out to other consumers.

Yet more of the beta updates, the users are looking forward to the main software release. Hence, here we are displaying the roadmap that hints at the schedule of Android 13.

In comparison to Android 12, the Android 13 rollout exhibits a shorter timeline. The company has already thrown out the third round of the update among the users. Although, users might get one more beta update before the final release.

Furthermore, the next beta update could launch in the month of July. But who knows, we may get some more tweak update points in between.

To summarize, we can say that, the Android 13 operating system could take place in August 2022 among the users. Till then, users can enjoy the third beta of the forthcoming version of Android.

Users can install the latest beta update. But since it is a beta pack, it doesn’t promise complete stability of the software. Hence, install the software at your own risk. 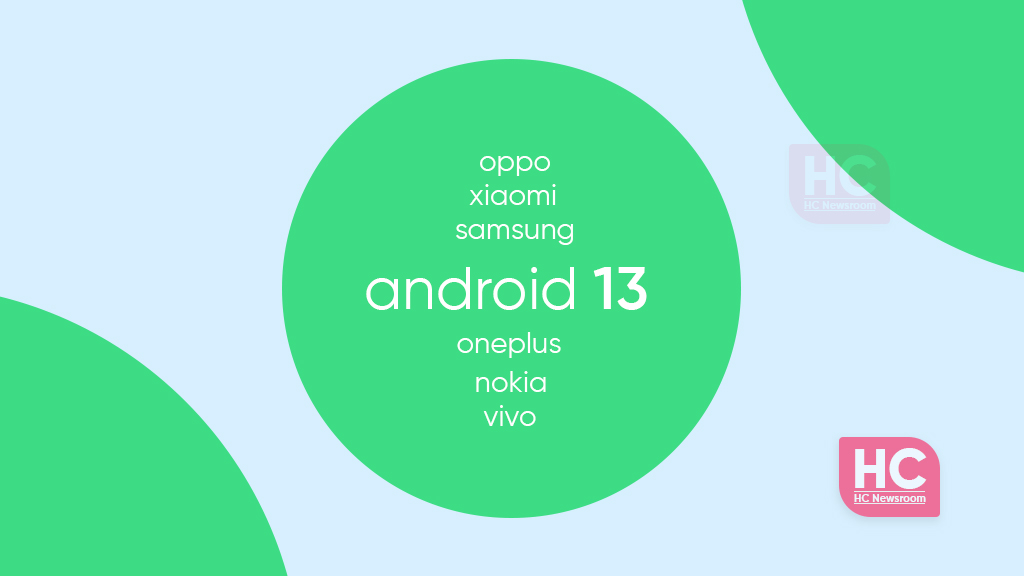 On August 15, Google launched Android 13 for the global Android devices and also announced the supported smartphones that will rollout this major Android version later this year.

Starting today, Android 13 is available to download on Pixel devices via OTA and manual flashing. However, Android 13 will come to devices from the following phone makers:

That’s not it, Google has also confirmed that this Android version will expand further among Android phone users. 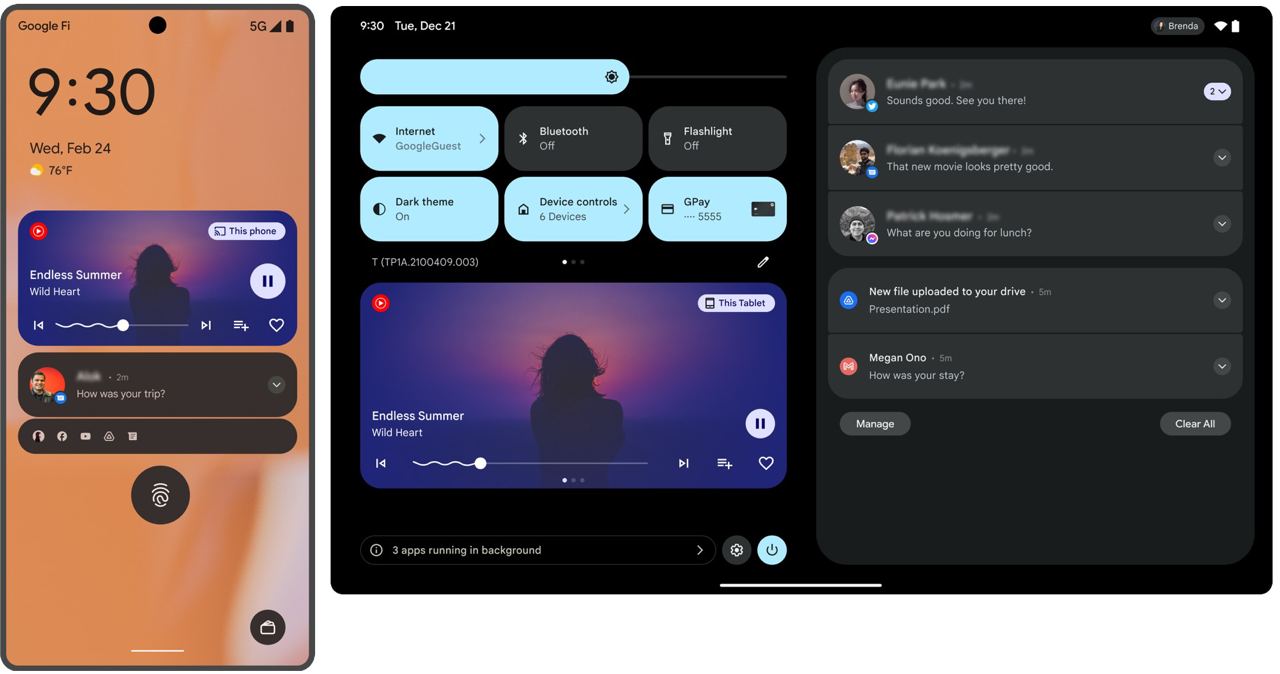 Back in February, the first preview build was published for Android 13 developers. After that Google released a number of developer test versions for the corresponding testers including the public testers.

Alongside, Android 13 was also announced in beta for several third-party OEMs. However, earlier this month, the Android 13 beta has been opened for big supporters such as Samsung.

This new Android version comes with a number of new features including the new themed icons, which now completely adopt the color of the wallpaper and look better than Android 12. 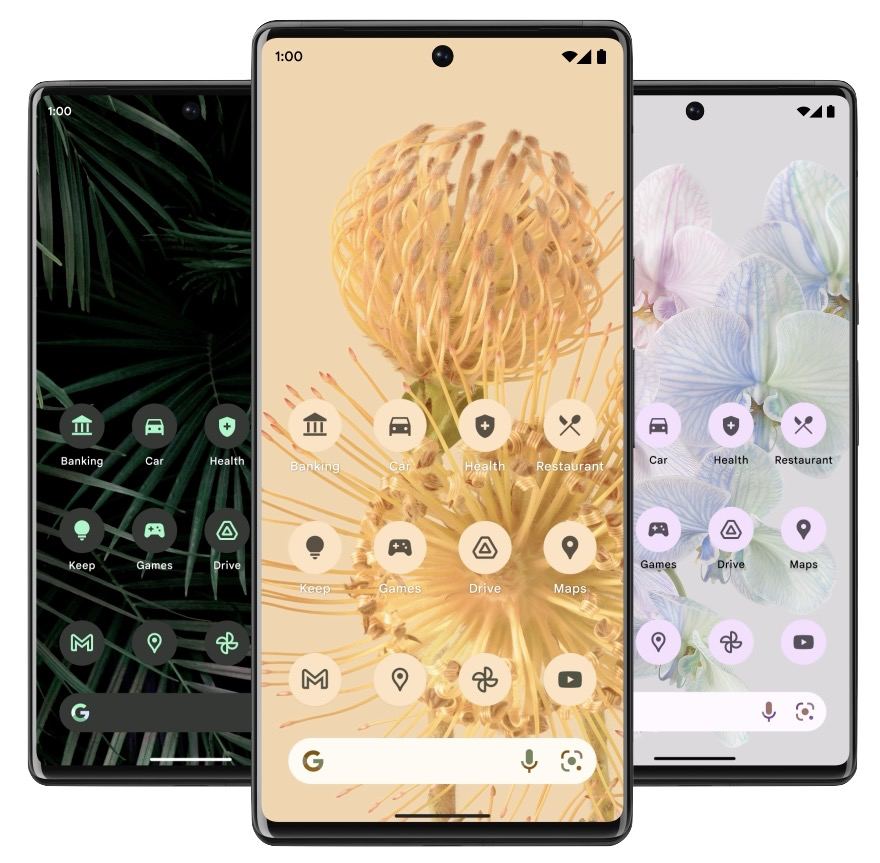 Android 13 brings in a brand new functionality called per-app language, which allows you to translate or run an app based on your language preference. Rather than the system language.

There are some improvements made to the on-screen media controls for both small and large screen devices.

Digital Wellbeing has been one of the useful features of the Android ecosystem and it’ll now allow you to customize Bedtime mode with wallpaper dimming and a dark theme. The screen option will also help your eyes to adjust the dark mode when you are about to sleep and get back to sleep if you wake up and check your phone at midnight.

There are many new functionalities that have been added to the security features as well as better controls over notifications. There’s a lot more to explore in Android 13 and these will expand for various Android phone makers as the testing proceeds.

Android 12 is only used by 13.3 percent devices, as Android 13 moves to launch 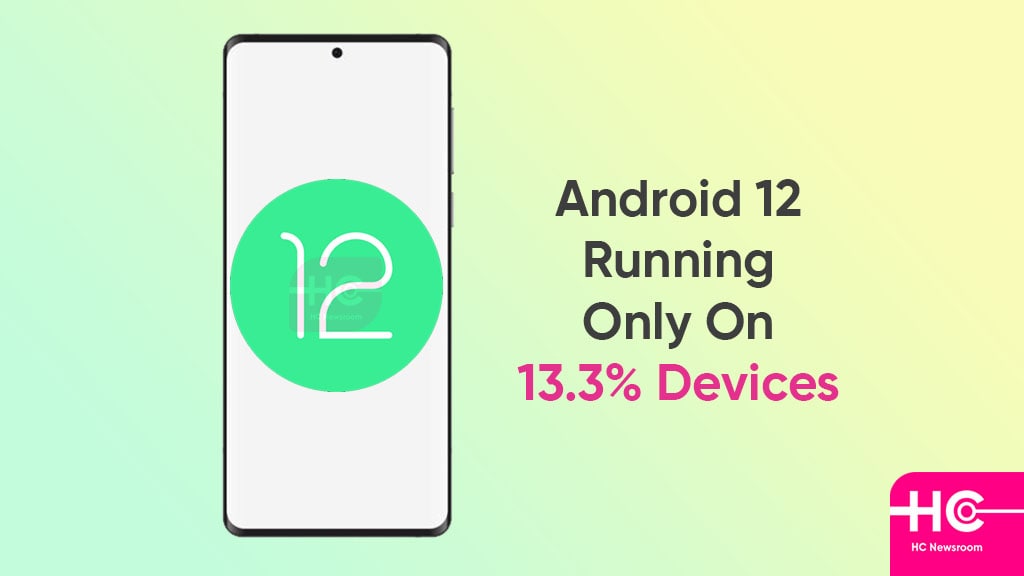 Android users are eagerly waiting to taste a new experience with the upcoming version of Android. As per the gossip, Google has implemented many new and surprising elements to Android 13. While the company is still giving some last-minute touch-ups to the stable firmware, the new info reveals that only 13.3 percent of devices are now using the Android 12 interface.

That’s right. Eventually, Google updated its Android distribution report at the beginning of this month. On moving into depth, we found that only 13.3 percent of device users rely upon the previous system, that is the Android 12.

Alongside, the company has also mentioned the bars of other Android versions. It’s worth mentioning that the other versions of Android are grabbing more attention than Android 12. For instance, Android 11 is currently available on 27% of devices.

Meanwhile, Android 10 and Android 9 are following the lead in second and third position with 22.3% and 14.5% respectively. Even years later, the older versions of Android are fully capable of beating the demands of the latest and new system versions.

On the flip side, Google’s report also describes the total distribution number of Android versions that have climbed up to 99.8 percent in August. The remaining 0.2% might be the achievement level of Android 12L. Alternatively, Android 12L has its own API levels and has provided various improvements and additions to the large screen devices. 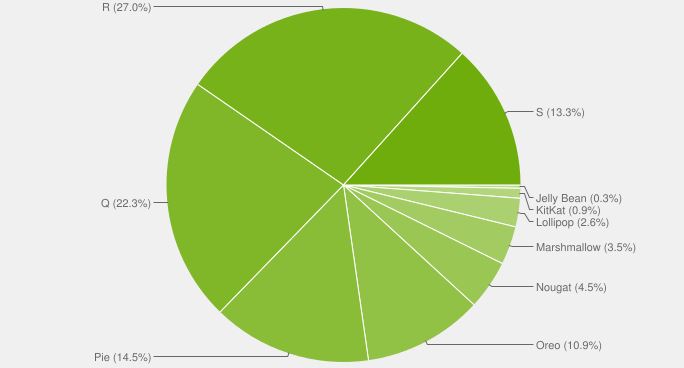 Well, that shows the popularity of older versions of Android among users. Though Android 12 and above-released versions carry several things to explore. Yet, consumers in the market prefer to depend on the old stable versions. This might be a matter of convenience and fear of facing bugs and issues due to new software.

So far, Google has not mentioned the distribution number of Android 12 for four months. However, the company brought it down to the users just before the launch of Android 13. The reasons are still unknown as to why the company didn’t give an appropriate report for such a long time.

There is still some time left in the release of the stable Android 13 interface. Will the new version be able to grab the full attention of the users? Or the users will choose the previous versions over revamped software? We will keep updating you on this aspect.