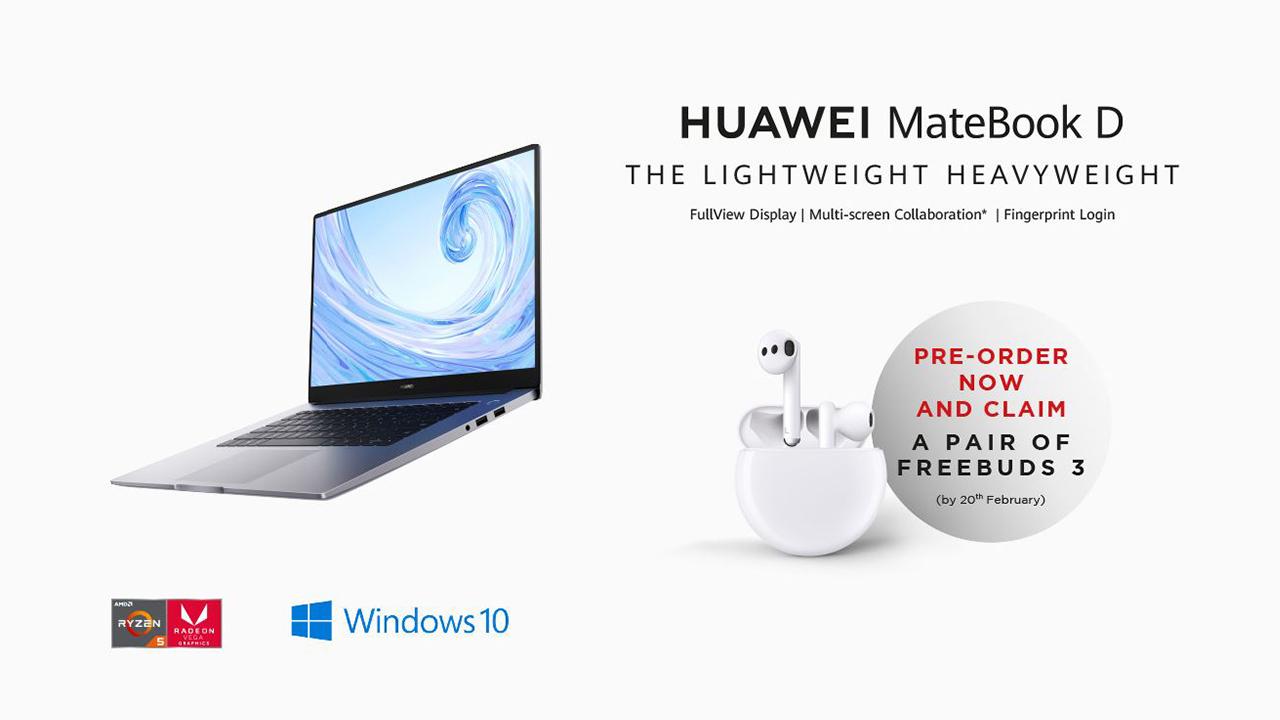 Huawei MateBook D 15 is priced at GBP 599.99 and available to pre-order at Amazon and Argos. The shipments will start on February 21. People who’ll pre-order the MateBook D 15 will get a free pair of FreeBuds 3 wireless earbuds (worth GBP 126). 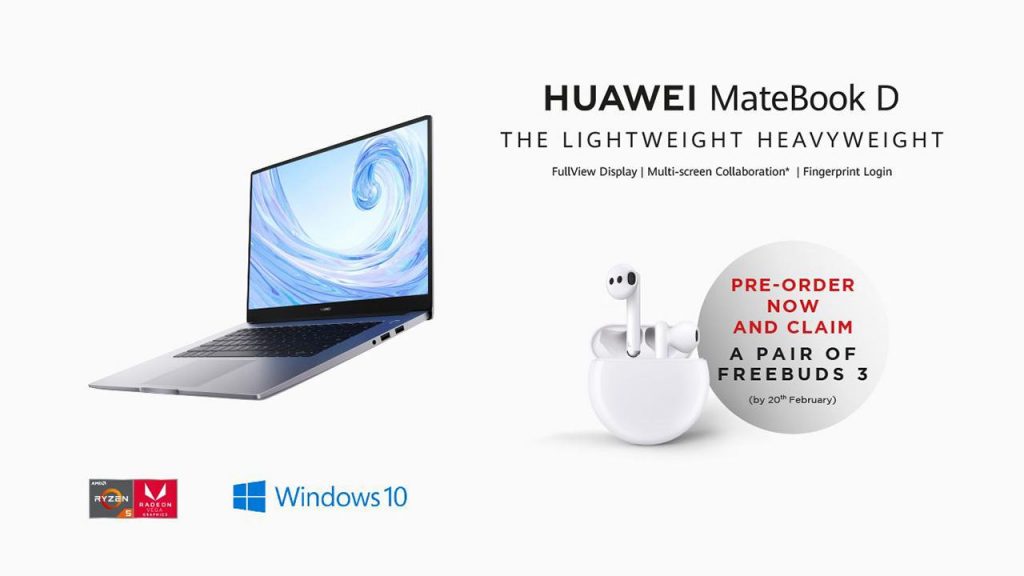 Huawei MateBook D 15 features a 15.6-inches IPS FHD FullView display with 87% screen-to-body ratio and narrow bezels which have been reduced to 5.3mm. This notebook wears a metallic body that weighs 1.53kg and a thickness of 16.9mm.

The MateBook D 15 is powered by AMD Ryzen 5 3500U processor with Radeon Vega 8 graphics, 8GB of DDR4 memory with a combination of 256GB PCIe SSD.

The design of MateBook D 15 includes a built-in fingerprint reader on top of the power button, 42Wh battery capacity that supports 65W charging.

Both Huawei MateBook 15 come pre-installed with Windows 10 OS and smart features such as multi-screen collaboration. 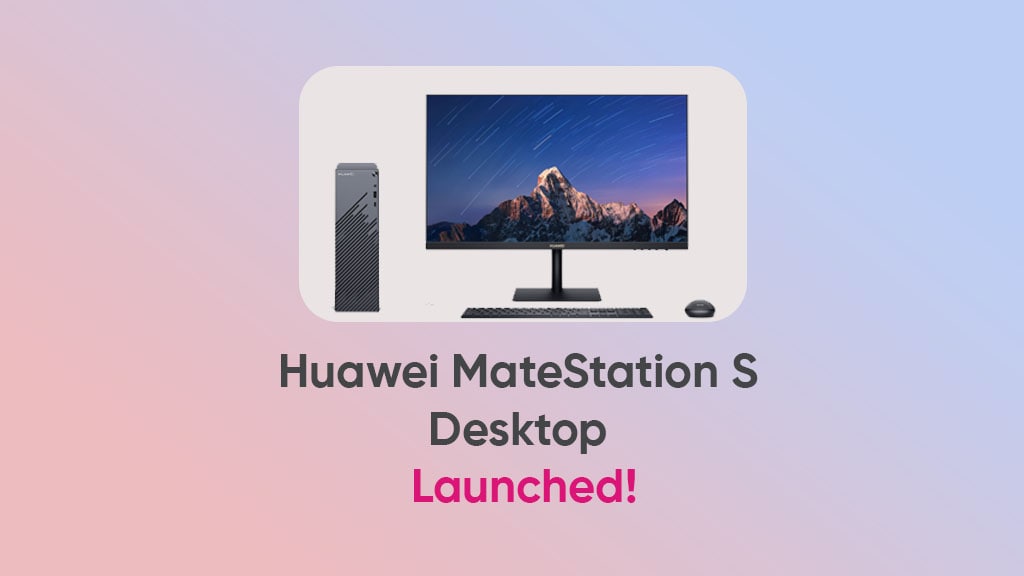 At the launch event of the Huawei Mate 50 series, Huawei unveiled many other interesting products. One such product is the Huawei MateStation S desktop, which inherits the Super Device feature.

The Super Device feature provides a wireless connection combination of devices. By just clicking on the icons of different devices together you can connect to them.

Specifically, materials, documents, and pictures received by mobile phones, tablets, and other devices can be dragged and transferred to and from the computer in both directions.

Alongside, it features a 2×2 dual-antenna Wi-Fi 6 with speeds up to 2400Mbps. At the same time, the desktop supports Bluetooth 5.1 wireless connection.

In terms of interfaces, the front panel equips 2 USB ports and 6 USB ports in the rear. In addition to supporting HDMI, the display interface also equips a DP interface, which can basically meet most mainstream input devices.

In addition, it can also interconnect with devices such as monitors, wireless headphones, keyboards and mice, speakers, and printers to achieve information synchronization, resource sharing, and experience the convenience of the HarmonyOS ecosystem.

Equipped with a “mobile application engine”, which realizes compatibility between the Windows system and mobile apps from the bottom layer, allowing users to enjoy two ecosystems on one screen, such as ordering takeout on the new Huawei MateStation S desktop, Chatting on WeChat, swiping Douyin, etc. is not a problem.

The new computer has the capability of a remote PC. Users can access Huawei  MateStation S through the remote access card of the Huawei tablet, enter the password of the PC under the same Huawei account to access the Huawei MateStation S, and realize remote work. 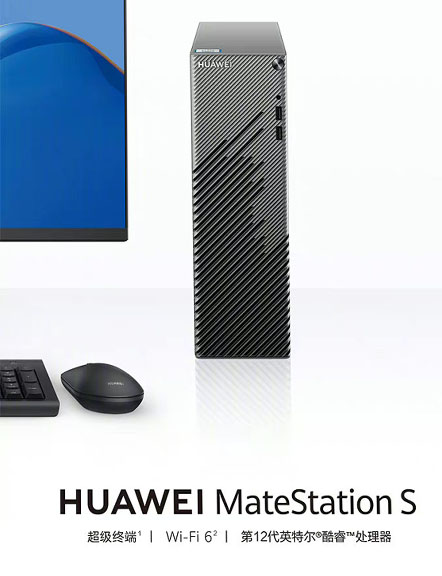 The specific prices are as follows: 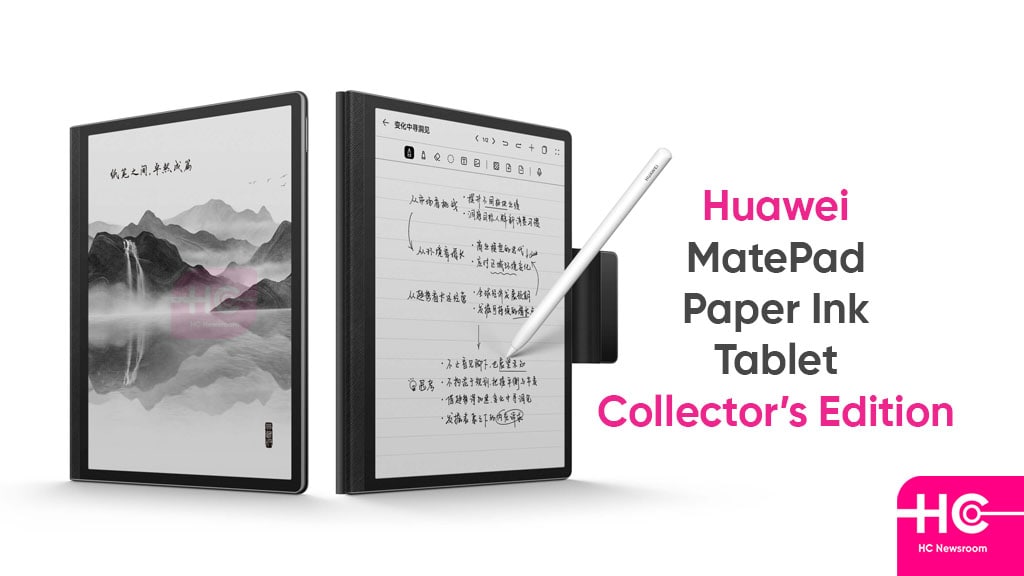 Huawei MatePad Paper Ink Tablet has finally debuted on the Mate 50 series launch stage. So far, we were dealing with the dilemma of whether the Chinese manufacturer will release a new tablet in its MatePad Paper family or not. However, the company has marked a full stop over every question by launching the respective device.

Huawei has launched the new MatePad Paper Ink Collector Edition with some implements on the core mechanism. Consequently, this device uses elegant black leather on the back surface with classic cross lines.

With a sleek outlook, the device weighs 370 grams and has a thickness of 6.65mm. To amplify the look and attractiveness a little more, the company brings the device packed in an exquisite gift box.

The mini-tablet sports a 10.3-inch screen with 86.3 percent of screen body aspect. It reflects a 227 PPI (Pixels Per Inch) ink display with a resolution of 1872 x 1404 pixels. Further, the tablet supports a smart refresh rate that provides more vibrance over the screen. 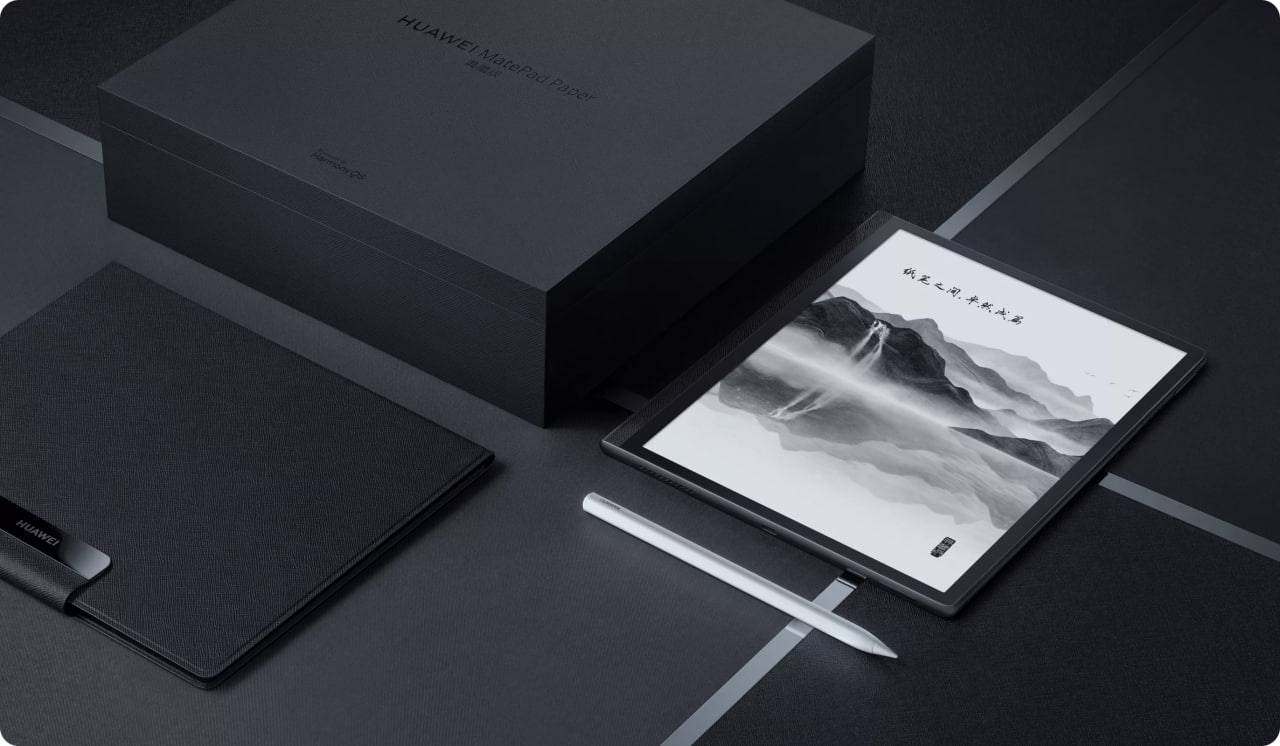 Speaking of the processor, the Huawei MatePad Paper Ink tablet powers a Kirin 820E chipset. Further, it supports the LTE connection and allows the smart network cards to easily connect to the Internet. It also has a wraparound antenna design which revamps the travel as well as handheld scenarios.

Alongside, it lets your read the information anytime and with just one go. In terms of memory, the device equips a 6GB + 128GB version. In addition, it also has Wi-Fi 6+, a fingerprint power button, 32-level reading light, dual speakers, 22.5W fast charge, and other highlights.

Moreover, it supports M-Pencil ushered in a new white matte version, and the note-taking function ushered in a number of upgrades. It also has the HarmonyOS system that brings some latest features for the tablet.

For insrtance,PDF intelligent typesetting, emotional tone reading, special fonts, bookshelf classification, card design and other functions. This device is available at 4999 yuan [718.43 USD] and will appear for the pre-sale from tonight. 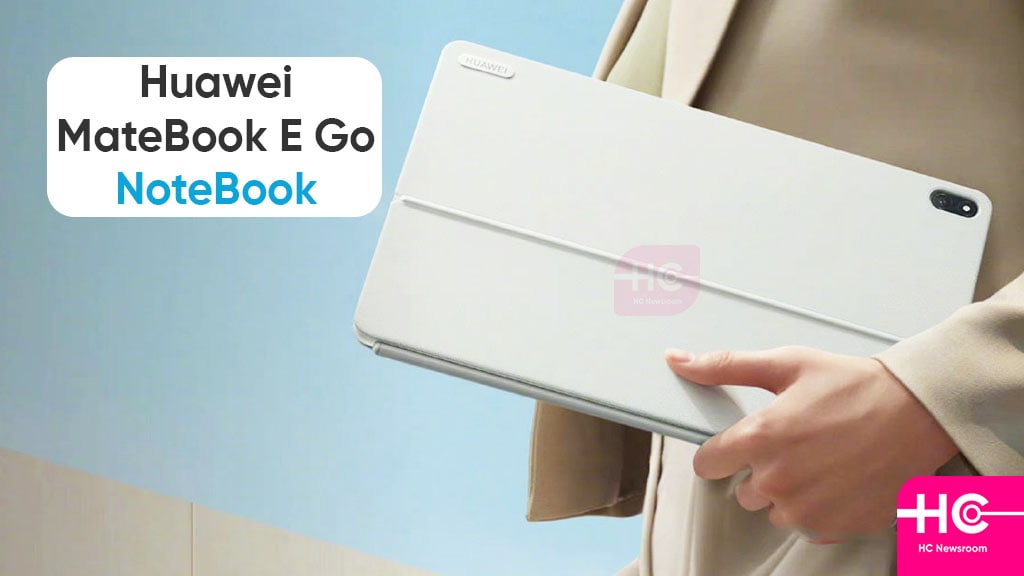 Here comes the most inquisitive device, the 2-in-1 Huawei MateBook E Go notebook with the latest Windows 11 interface. Besides, the ultimate device has given the rumors, a twist of reality and has powered the well-built Qualcomm Snapdragon 8cx Gen 3 processor.

Huawei MateBook E Go notebook has stepped into the real world with a lot of immersive and thoughtful tweaks for the users. With an eye-catching outline and feather-like design, the device has a lot to learn about. So let’s begin this journey and tour the new features of the 2-in-1 smart gadget.

The fresh notebook model sports a 12.35-inch screen that offers 2.5K (2560 x 1600 pixels) resolutions. Alongside, the device holds a refresh rate of 120Hz and a P3 wide color gamut that delivers a smooth and vibrant visual experience, with AE-1 professional-grade color accuracy.

The device has also qualified and achieved the Low Blue-Light and Flicker-free certification. Hence, you will not get any type of strain on your eyes and can manage numerous tasks effectively. Ahead, the equips a 4 x 4 MIMO cellular antenna group that let you surf the network without any hindrance.

Additionally, the device gives space for a zero noise cooling system, a multi-device sharing function, a multi-screen layout, and a Super Transit 5 smart communication feature, so that you can collaborate with others and share the content in real-time.

Further, to provide you with the most efficient and reliable performance background, the device equips the latest Qualcomm Snapdragon 8cx Gen 3 processor as well as a high-end battery capacity of 45.84Wh which can achieve 65W fast charging.

Ultimately, this will supply a local video playback time of 14.1 hours constantly. On the other hand, the daily operations and office-related tasks can lead up to 7.1 hours.

The device also carries a front camera of 8MP and a rear camera of 13MP. Both lenses feature HD traits. Ahead, there is WiFi 6, Bluetooth 5.1, and USB-C x 1 interface. It also carries 4 mini microphones and 2 audio speakers.

The dynamic device lands on the consumer platform in three memory variants. As per your requirements, you can choose any of the cost-effective versions mentioned below.

You also get some services with these devices that charge additional costs. For instance, the one-year term of broken screen service costs 399 yuan [57.30 USD].

Another interesting part of the notebook is its colorways. Yes, Huawei MateBook E Go is available in two elegant shades – Snow White and Nebula Gray with detachable colorful keyboards. Besides, you will also find an M-Pencil stylus for easy interception of the content.

Do you know why the device carries the 2-in-1 suffix? Well, it means that you can turn your device into a notebook or a tablet as per your choice. Moreover, it is a 710g weighted device with 7.68mm thickness. Hence, it is a compact and portable gadget that can provide you with immense experience.