Huawei has officially announced its new Mate 30 series devices including the Mate 30 equipped with a display that’s bigger than the Mate 30 Pro while retaining the 3.5 mm audio jack and physical volume adjustment keys to give users a regular experience. In addition, this smartphone is also available in 5G.

So without further a due, let’s explore the Mate 30 in a bit detail.

Huawei Mate 30 runs on EMUI 10 based on Android 10. As it has a battery capacity of 4200mAh that can be recharged with 40W HUAWEI SuperCharge and also a new 27W Wireless SuperFast Charger, which you’ve to purchase separately.

Huawei Mate 30 is equipped with In-screen fingerprint sensor and is IP53 dust and splash resistant (Not water Resistant). The Mate 30 can share power with other phones via reverse wireless charging with improved performance.

Note: There are no changes except the processor in both 4G and 5G versions. 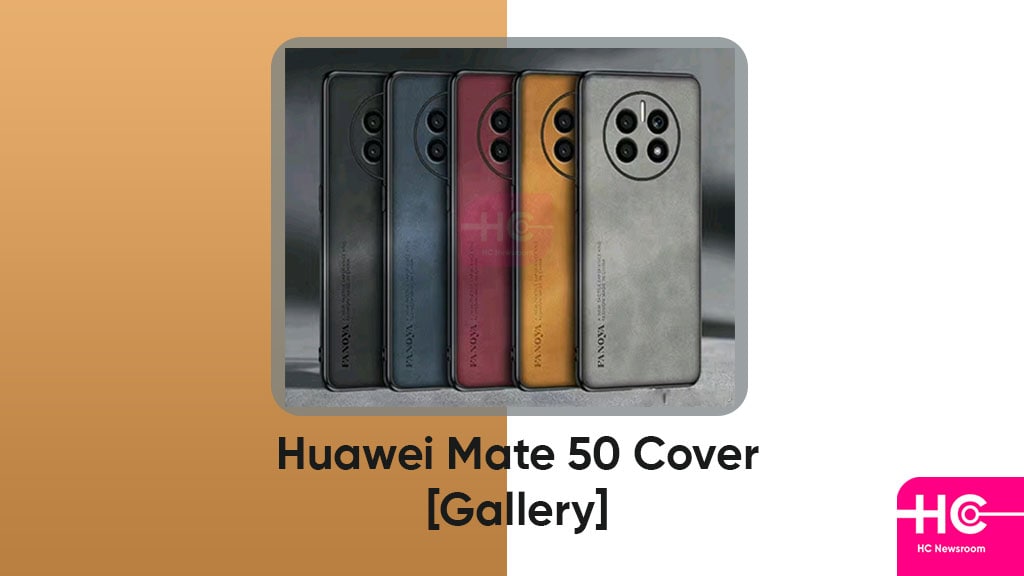 Huawei Mate 50 series has still some time left to appear and introduce itself in front of the consumers. Meanwhile, several rumors and speculations have made space in the headlines about relative components of the Mate 50 series. In the latest section, some new Huawei Mate 50 cover leaks are caught in our hands.

In the past few months, we came across a bunch of Huawei Mate 50 cover leaks. Some or the other way, these leaks have provided us with the utmost information regarding the exterior design as well as the appearance of the Mate 50 lineup.

Most importantly, these leaks gave us an idea of how Huawei has implemented the camera hood, this time. The Chinese manufacturer keeps on experimenting with new ways for its camera structure on the devices. And the phone cover is a good way to understand these implements easily.

The well-known digital tipster – @FactoryDirectorShiGuan has recently brought these covers through his Weibo posts. Giving a hint at what kind of new executions the users would see in the next coming lineup, the tipster has shared these images.

So without wasting any moment, let’s explore these Mate 50 covers one by one!

Huawei Mate 50 Pro cover: The first five images showcases the exterior edges of the Mate 50 Pro smartphone. These covers exhibit the rear camera arrangement of the Mate 50 Pro. The leather-packed sheets will provide a tough and bold framework for the Pro variant.

While the golden and zebra-striped cover will give a dynamic look at the rear side of the device. Ahead, there is also a white variant that will give a shiny and elegant texture to the back surface of the Pro version.

Huawei Mate 50 cover: In the second last frame, the cover describes the hard personality of the standard Mate 50 model. The rough cases highlight the superiority and some external clues about the Mate 50 smartphone series.

Huawei Mate 50 RS Porsche Design cover: Last, but not least, we have the cover that displays the octagonal lens hood of the Mate 50 Porsche Edition. Just like the name, the covers of these models are also quite different.

Showing the camera structure in a detailed manner, these covers proves that there is much more to explore in the Huawei Mate 50 RS Porsche Design. 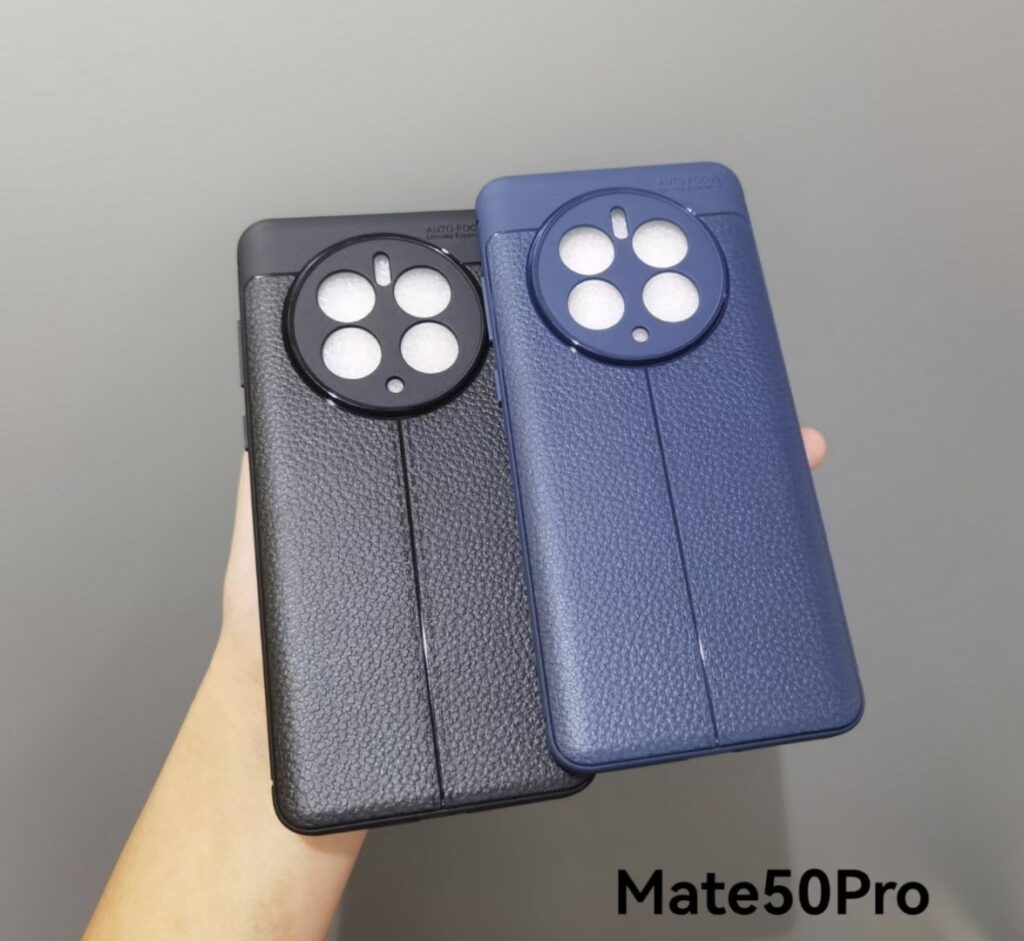 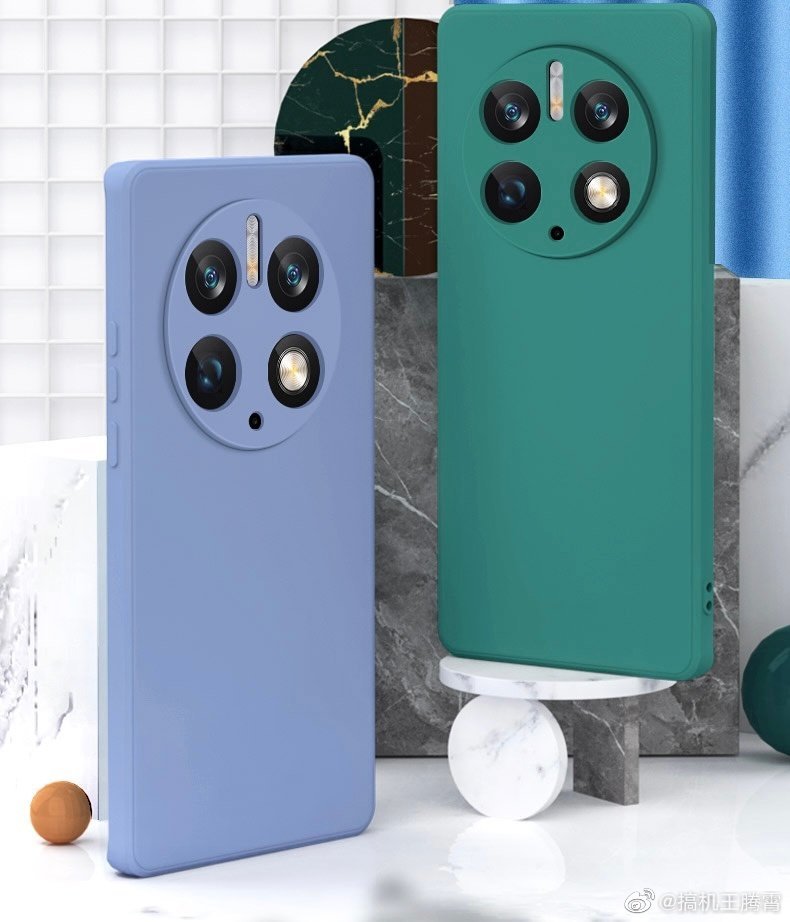 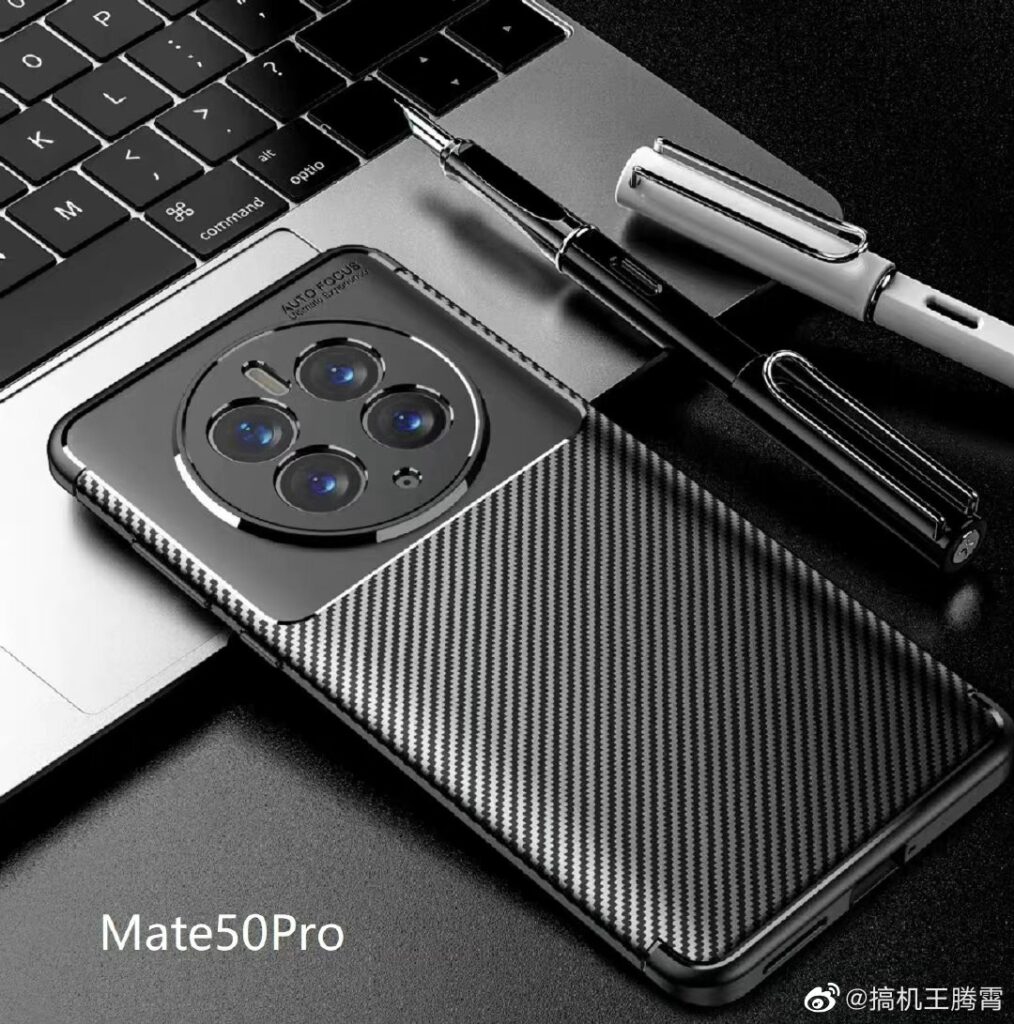 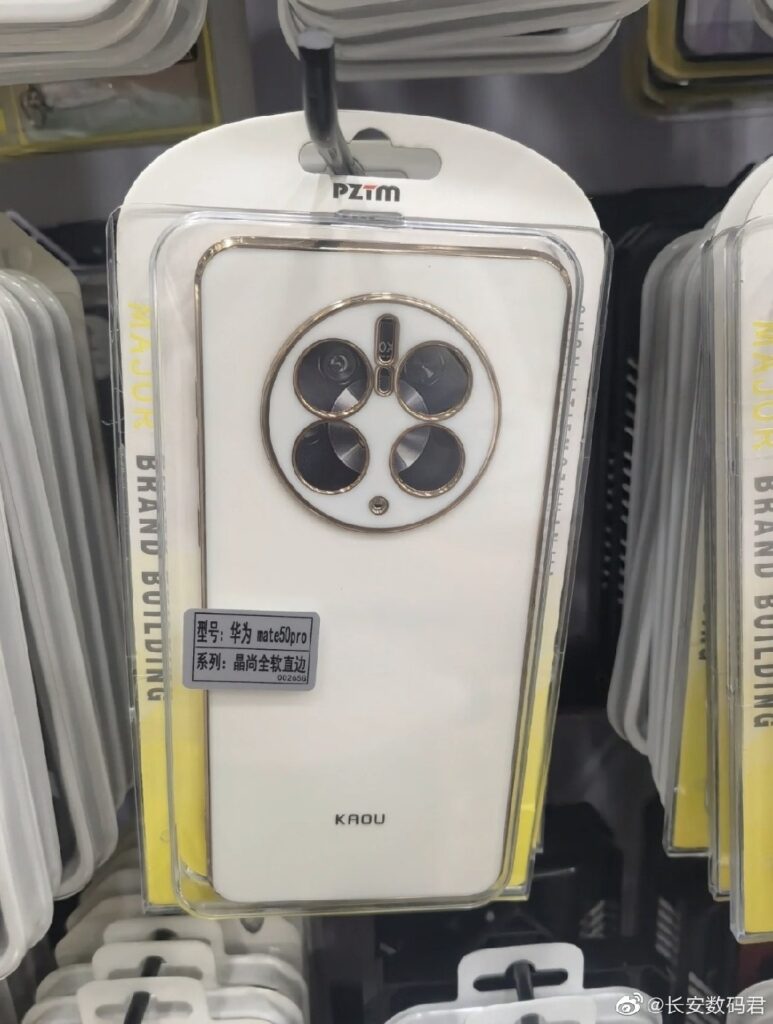 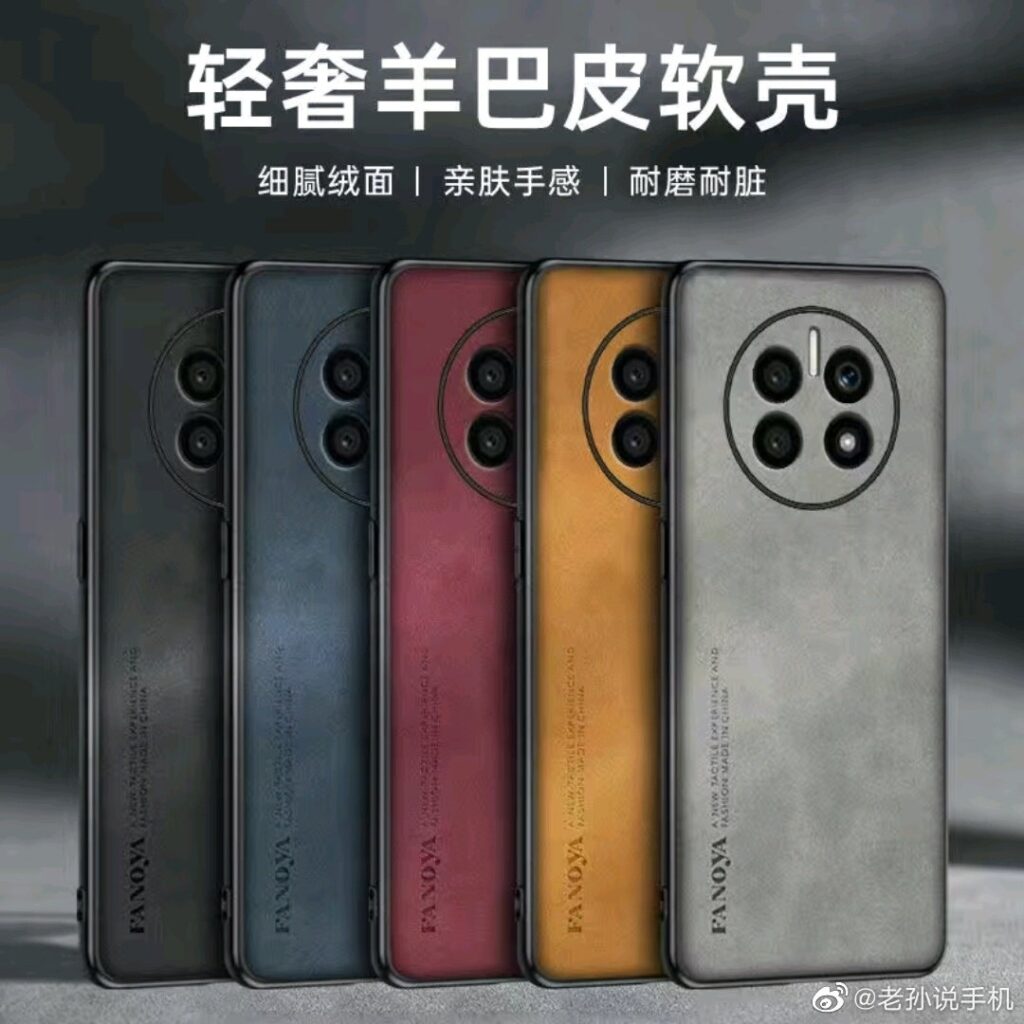 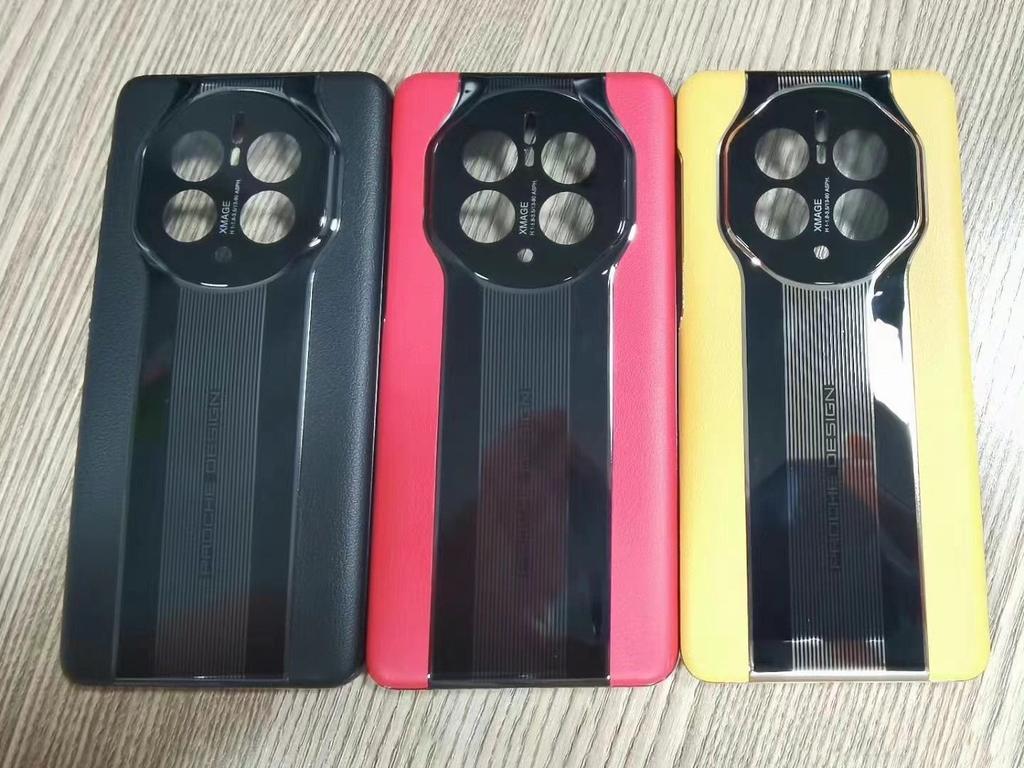 iPhone 14 to launch on September 7, clashing with Huawei Mate 50?

Inputs coming from Bloomberg revealed that Apple has planned to launch iPhone 14 series in September, which could possibly lead to a clash with Huawei Mate 50 series on the same date.

The report reveals that iPhone 14 could launch on September 7, however, the plan may change accordingly. Yet, it’s likely that the first half of September is set as the final unveiling. Alongside, Apple could also bring a new smartwatch, stable iOS 16, new macOS, watchOS, and other hardware devices such as iPad and new Mac.

Past leaks have suggested that Huawei could also choose to launch the Mate 50 series on September 7. The same day as iPhone 14. Aside from the global markets, the clash could possibly affect the sale in a big consumer zone – China.

Yes, Apple and other phone makers have taken a huge advantage of the past Huawei phone market share drop. However, even with a disadvantage such as the lack of 5G, Huawei Mate 50 still poses a bigger than a huge threat to iPhone 14 sales in the country.

A previous report marks that Huawei has resolved some of its common supply chain issues and getting sufficient units of Mate 50 devices for the consumers. The supply chain has been a major issue for Huawei since 2019’s U.S. entity list but the company has gradually resolved this issue with domestic and some overseas suppliers.

Similar to the previous lineup, Apple will bring you iPhone 14 with the latest tiny/big changes such as the new display by ousting a notch with pill and hole punch to hose face id. The company will also outcast a mini version but it is expected that iPhone 14 series will consist of four models. There are also some new changes that are expected to bring in the camera section including a 48MP rear camera system, improved from the last generation.

Huawei Mate 50 series will bring back the notch from Huawei Mate 20 Pro and fetch with latest hardware technologies. The Chinese tech maker will further focus on camera technologies with the inclusion of the new XMAGE camera imaging system.

The company has currently planned to launch three models – Huawei Mate 50, Mate 50 Pro, and Mate 50 RS with flat and curved edge display panels. The phone will be powered by the HarmonyOS 3.0 operating system and a bunch of new smart features.

Huawei nor Apple has announced an official launch date for Mate 50 or iPhone 14 devices but we can patiently wait as September is not far enough. 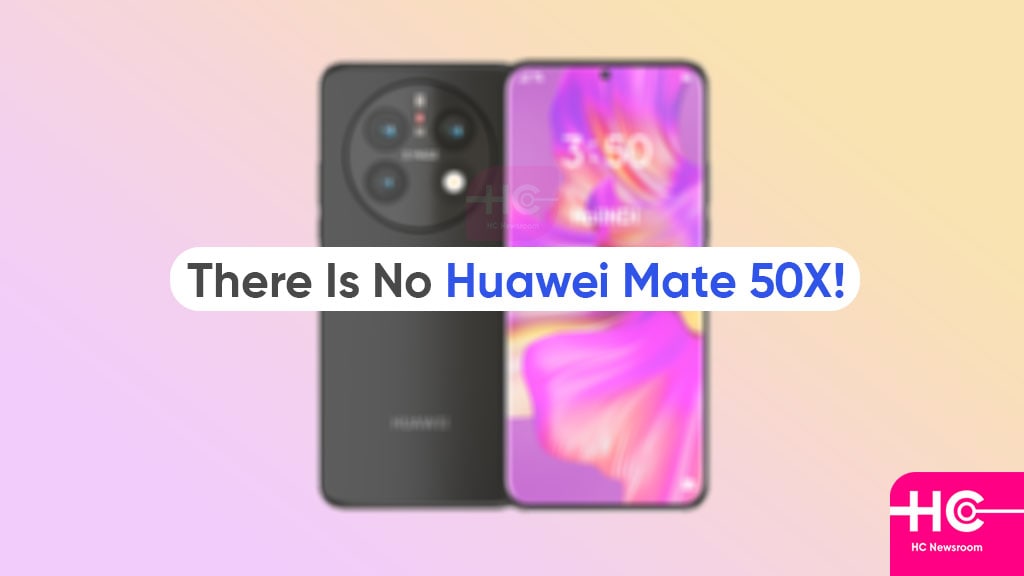 Huawei Mate 50X is what users are mainly looking for in the upcoming flagship series. After waiting for years, and listening to several new tweaks about the Mate 50 and its other members, Huawei fans are curious to know whether this time they will get the glance of the X series or not.

And to relieve this curiousness, once again we are back with the Huawei Mate 50X topic. But this time the information is quite unfortunate. Sadly, we will not find any smartphone model in the Mate 50 lineup that carries an X tag.

That says one of the famous Weibo blogger – @FactoryDirectorShiGuan. The tipster has clearly mentioned in his recent post that there is no Mate 50X in the forthcoming Mate 50 series. Consequently, users who were missing the X series will have to continue with the same grief for some more time.

It’s quite surprising to see that Huawei has suddenly marked a full stop on the dynamic X series. Though the company has given its consumers a bunch of devices that are much more powerful than the elder members of the smartphone family. Yet, after Mate 20 series, the users were anticipating finally having a glimpse of X-devices with the Mate 50 smartphone lineup. 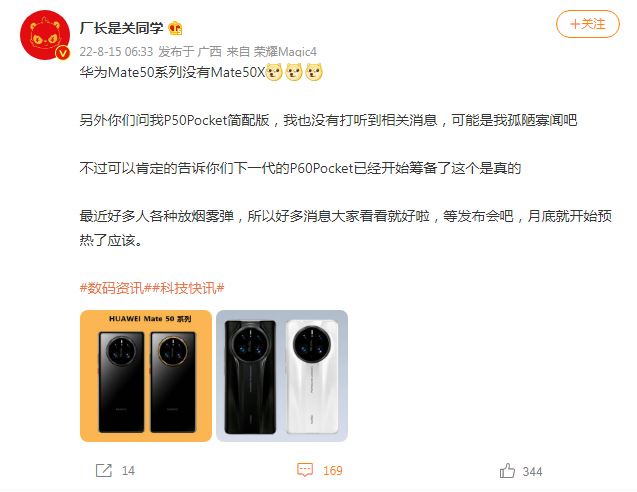 Other Mate 50 Models are bashing!

Althouh, we don’t have any official confirmation about this leak but can take it as almost what we’re about to witness. But that will never be a matter of disappointment as the company is bringing four attractive Mate 50 models on the consumer platform. These comprise the standard Mate 50, the Pro variant, and the ultimate Porsche edition.

Alongside, Huawei has implemented such technologies in new handset models that you would have never seen before. A good example is the XMAGE tech that will fill your photography time with more enthusiasm and zeal. On the flip side, you will find high-quality snaps with more vibrancy and details.

And about the X-series, well, let’s see whether the company will take a chance in the time ahead or will it remain stagnant in this subject.