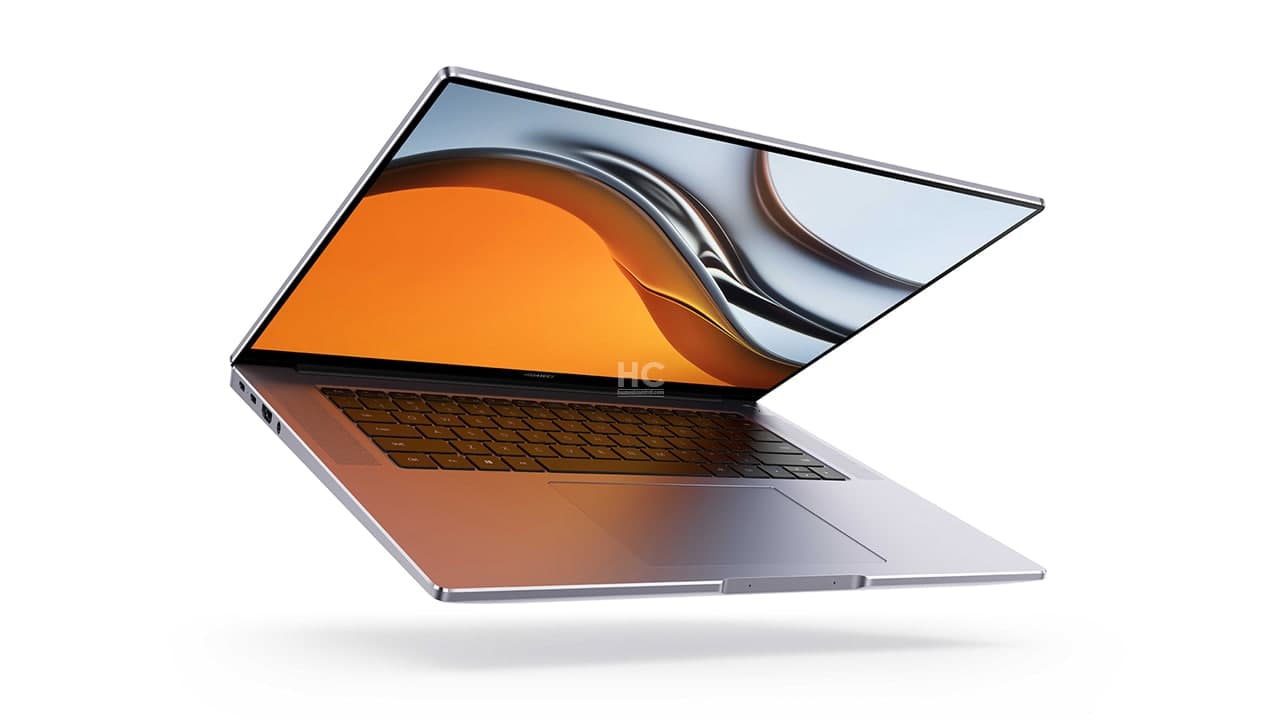 On May 19, Huawei finally jumped on its first big launch conference of this year that is titled as Huawei All Scenario Smart Product Launch Conference, where the compnay launched a number of new products including Smart Screen SE, new MateView monitors, FreeBuds 4 earbuds, and more.

However, the company at the same event also brought a new laptop variant of the Huawei MateBook 16, which offers some internal tweaks and a performance boost compared to the previous version.

Do you want to know more about the latest version of the Huawei MateBook 16 laptop? Let dig in.

In comparison to its large screen, the laptop still offers a light, sleek and stylish design. Talking about its measures, it has a 17.8mm thickness and weighs 1.99kg.

The display also contains TUV Rheinland Low Bluelight Certification effectively filters blue light emissions and professional-grade color certification as well, for all-day eye comfort and maximum viewing angle of 178-degree for the best view for every task, whether it is reading documents for work or watching videos.

Huawei MateBook 16 is powered by AMD’s Ryzen 5000H high-performance processor, 7nm Zen3 architecture. With this new processor, IPC performance increased by 19% compared to the previous generation, plus the frequency Improved, single-core and multi-core performance can easily be increased by more than 20%.

At the same time, the MateBook 16 notebook also has a Ryzen 7 5800H processor version. This is an 8-core 16-thread high-end processor with an acceleration frequency of up to 4.4GHz.

Inside the architecture, a large-size dual fan and a high-density innovative hinge design cooling system (air intake and output at the hinge at the same time), using a new shark fin heat dissipation and 2mm heat pipe.

The MateBook 16 also features a massive 84Wh (Rating value) high-capacity battery that supports up to 12.2 hours of continuous local 1080p video playback on a single charge.

This notebook comes with a superfast 135W USB-C charger and a USB-C to USB-C cable. The charger supports all Huawei smartphones and tablets that are equipped with a USB-C port.

It also features overheat protection, which automatically stops the charging process once the temperature crosses a threshold to ensure safety.

Huawei MateBook 16 has Windows 10 pre-installed. The laptop also supports smart features including Huawei Share, a Huawei-developed solution that bridges Windows and Android devices for an intelligent digital experience. Multi-screen collaboration, which seamlessly controls their Huawei smartphone through the PC, and easily transfer and share files between up to 3 devices.

Furthermore, this MateBook also has built-in One Touch with an increased area of one-touch sensing by 200%. 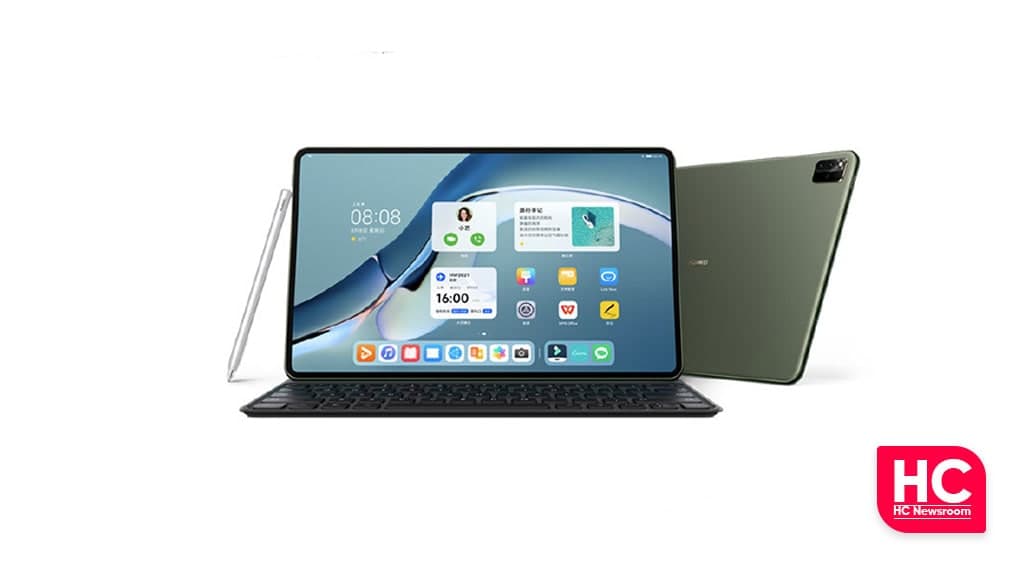 Not to mention, this HarmonyOS 2 powered tablet offers whole editing room capabilities for users to open an unbounded creative world. Somehow, the storage capacity is always a concern, so Huawei brings a 512GB storage variant for the 12.6 inches version.

Furthermore, this new tablet with larger memory storage has the same specifications such as a full OLED screen, HarmonyOS 2, Kirin 9000 series chip, multi-screen collaboration, and so on as the previous variants. However, it comes in two variants with different prices– 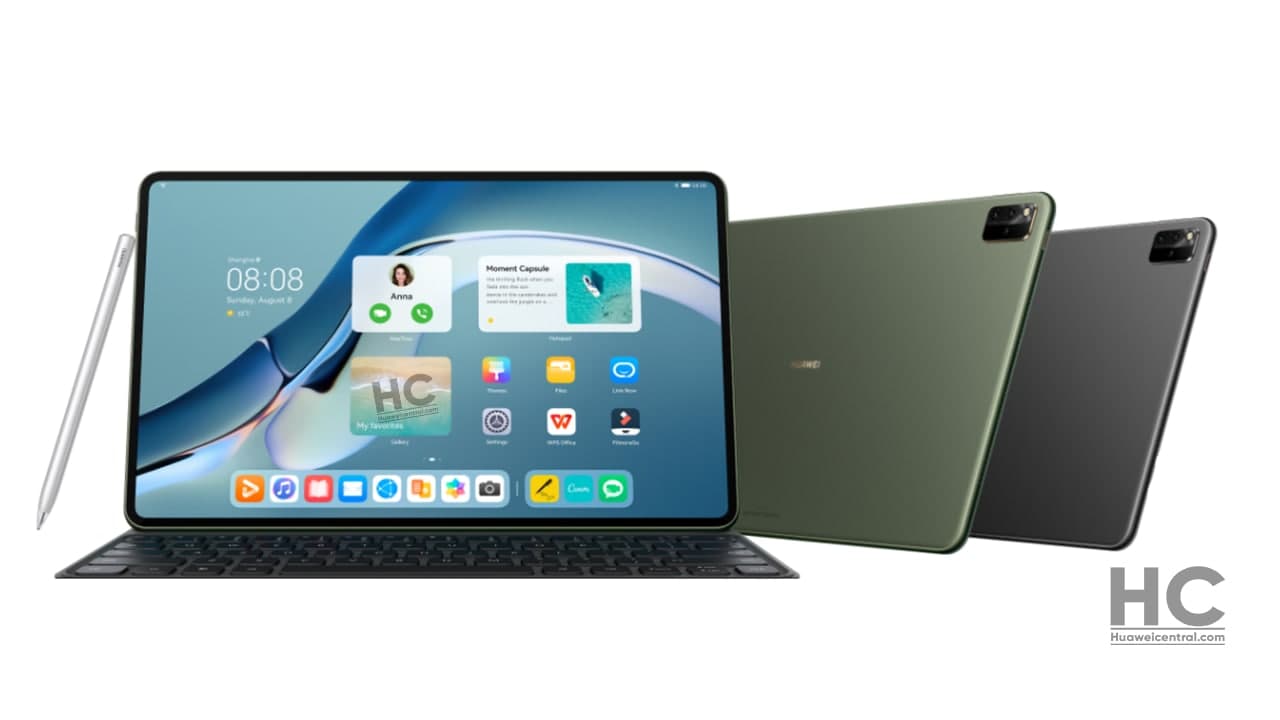 Now, it’s time to explore the details of the model-

The 12.6 inches screen occupying 90% of the screen-to-body ratio provides a 2560 x 1600 pixel resolution in Huawei MatePad Pro to delivers a clearer view. Moving ahead, it features a DCI-P3 wide color gamut and a 1,000,000:1 color contrast for a professional-grade detailed exhibition of the visuals such as pictures and videos.

Adding to this, the laptop is certified by TUV Rheinland eye certification 2.0 to assure your eye protection arrangement from blue lights. So, you can focus on your work without being worried about limiting the working time on the tablet.

This tablet’s processer is powered by 5nm Kirin 9000 series chipsets with more than 15 billion transistors. The eight-core CPU with three-speed energy efficiency architecture not only provides preeminent performance but lesser power consumption. Furthermore, the whole arrangement is shipped with the following components and technology-

Additionally, it has a brand new multilingual smart voice recognization button for real-time voice-to-text conversion. It supports many languages such as Mandarin, English, Japanese, and so on. Besides, also supports a concurrent interpretation of Chinese to foreign accents.

This Huawei tablet packs with a 10050mAh large battery to provide continuous video playback for 14 hours. Besides, it supports all kinds of charging with the below-mentioned capabilities- 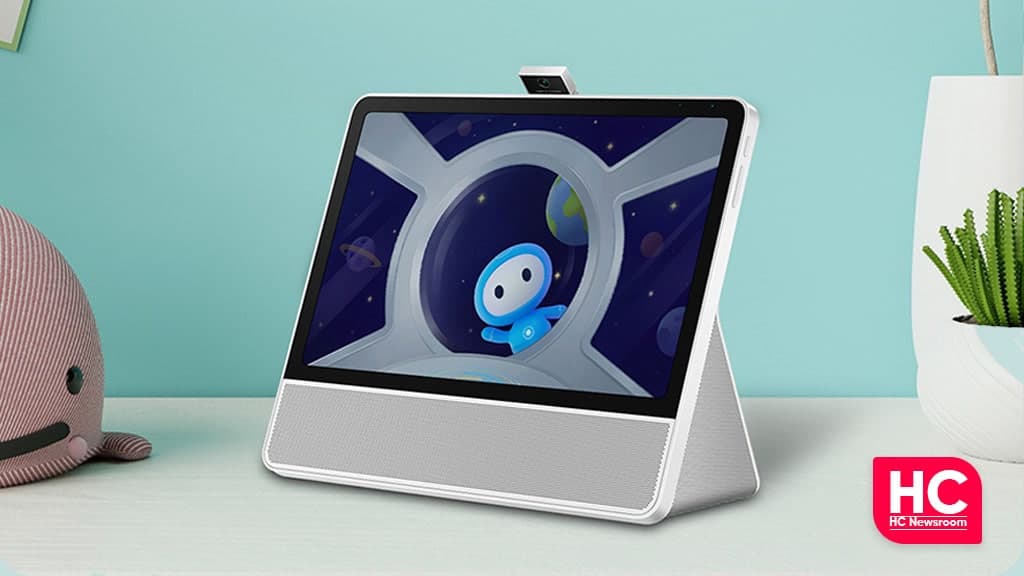 With the unveiling of the Huawei P50 series, Huawei has also launched a bunch of smart products including the Huawei learning smart screen. This smart device is completely designed for children as a new way of autonomous learning.

Also, it is the company’s first children’s educational product that comes with HarmonyOS 2 operating system to deliver a whole new user experience. 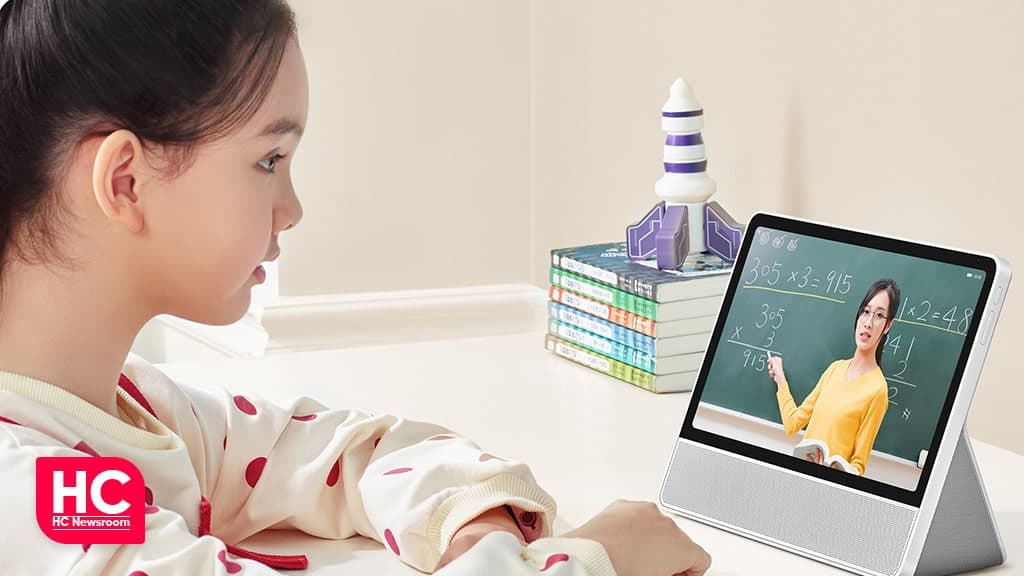 This smart screen expands to 190.83mm x 247.18mm x 88.52mm dimensions and weighs around 2.07 kg including battery. The storage configuration consisted of 4G of RAM and 64/128GB of internal storage option, which doesn’t support extension.

It is equipped with a rear 13MP (f/1.8 aperture zoom) telescopic camera and an 8MP (f/2.0 aperture) fixed focus front camera system. Talking about the battery, it packs with 10995mAh battery with 22.5W charging support. 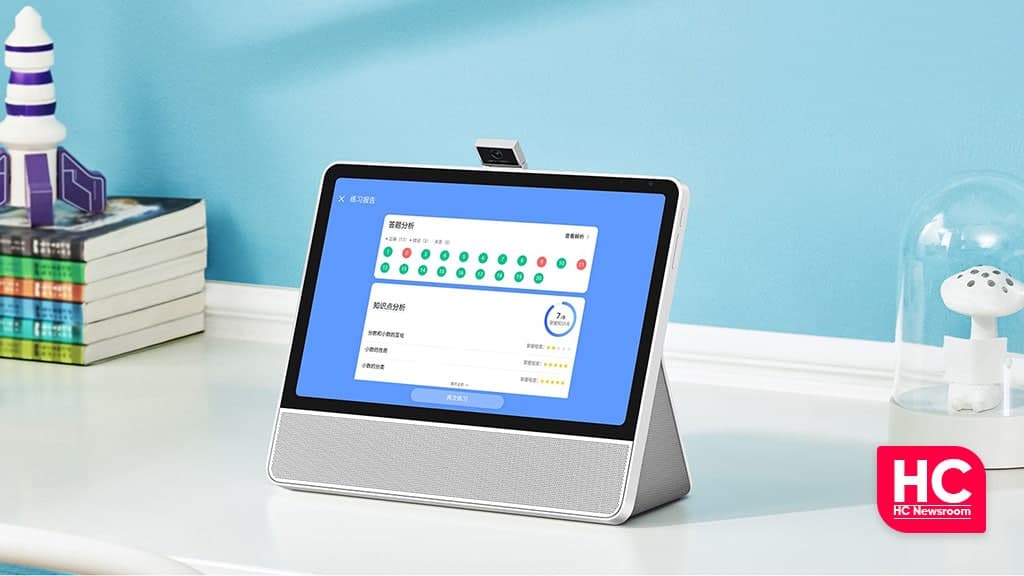 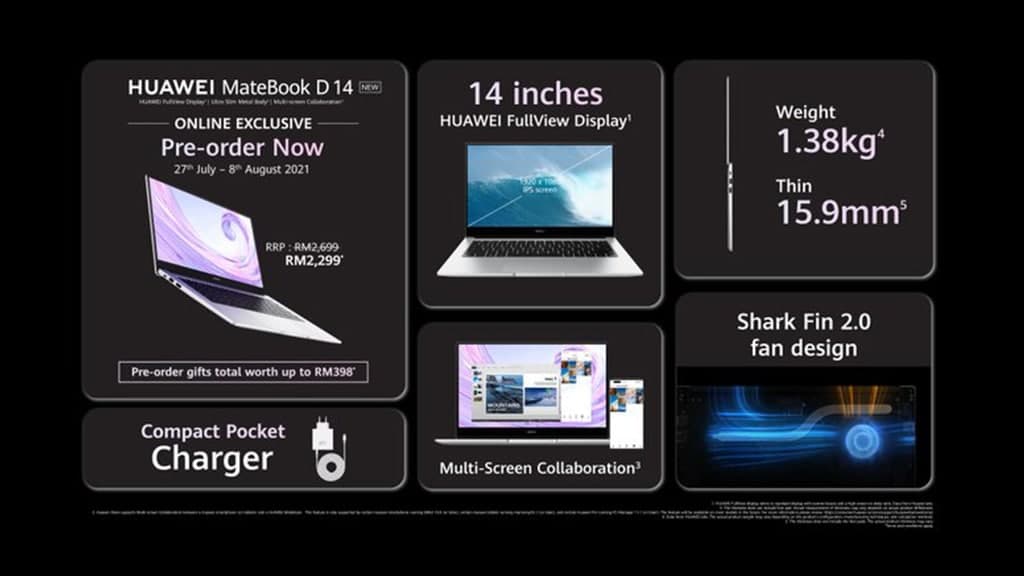 Huawei Malaysia has opened the pre-order for the Huawei MateBook D 14 laptop with a huge discount of RM400 and two free gifts for further convenience of users. This is a limed time offer based on first come first serve service, so think again before further delaying the time.

Huawei MateBook D 14 lineup with the Intel processor and Windows 10 operating system equipped Huawei with exclusive features such as high-stream computing performance, long-time power retaining capability, and many other features to satisfy the users’ demands. 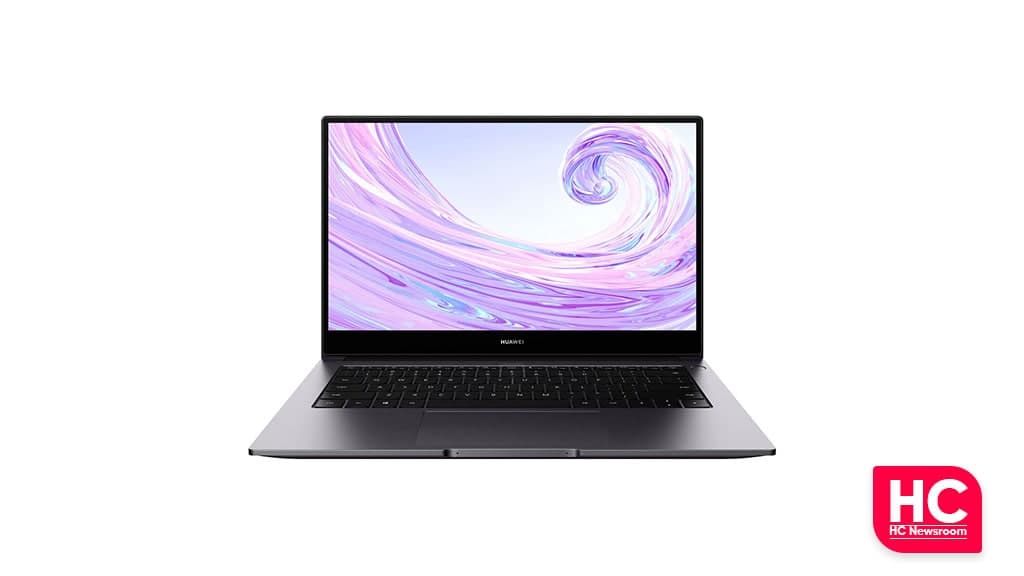 Now, it’s time to know what’ll we get with the Huawei laptop-

The Huawei MateBook D 14 offers a 14-inch IPS display to provide 1920 x 1080 pixel resolution with a pixel density of 157PPI. Moving ahead, this laptop is powered by Intel Core and comes with 8GB of RAM to ensure efficient computing capabilities.

Furthermore, it features an inbuilt lithium-polymer battery of 56Wh that is charged with the support of a 65W wired fast charger. It enables the laptop to provide support for continuous 13.2 hours of video playback at 1080p high resolution on a single charge.

Additionally, this laptop supports Bluetooth 5.0, USB Type C, USB-A (both USB 3.0 and USB 2.0), WiFi, and has a 1MP recessed web camera. Besides, it comes with a one-year official warranty to remove all your worries for the time being.