Today, a Chinese think tank released a “Smartphone Consumption Trend & User Loyalty and Churn report” based on Chinese consumers, which show that nearly 80% of smartphone consumers moving towards Huawei.

According to the report, the average purchase capacity of every smartphone consumers is around 3182 yuan. As per their purchase capacity, most of them or nearly 50% of consumer replace their smartphone by purchasing mid-range models, 37.4% purchase flagship models and 13.3% buy standard models.

From all the smartphone brands, Huawei has a high loyalty rate of about 73.3% that attracts the consumers to choose Huawei as their next smartphone. As compared to last year their 10% increment noted in this year’s purchase rate. 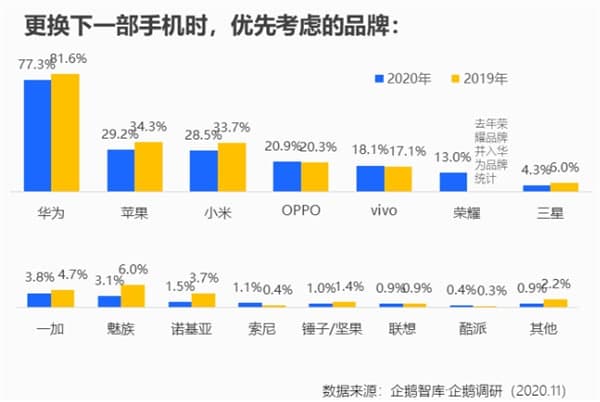 Now, 77.3% of consumers giving priority to Huawei for buying their next smartphone followed by Apple and Xiaomi in the second and third spots respectively. The top users of Apple, Xiaomi, Oppo, Honor, and Vivo are also shifting towards Huawei.