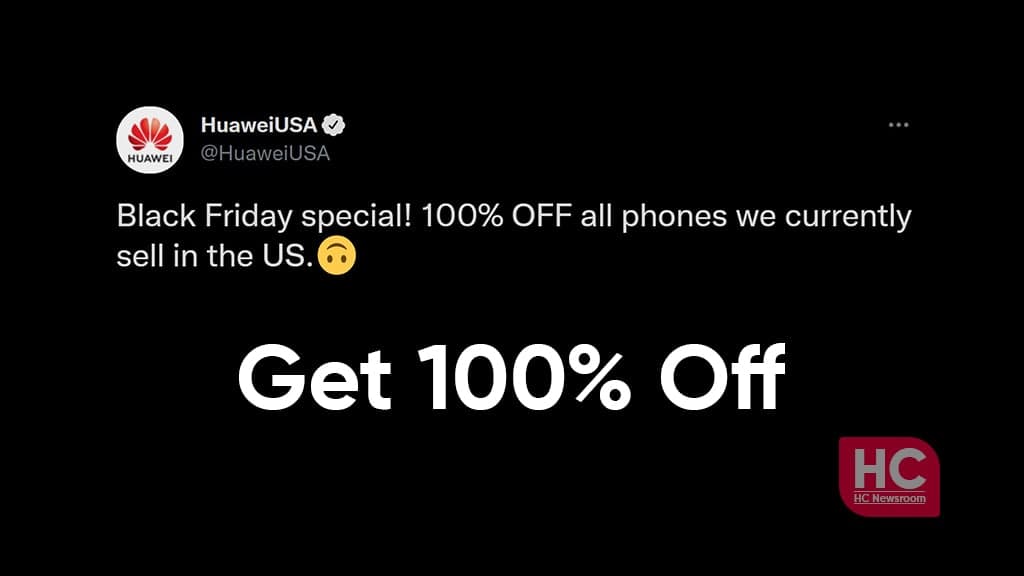 Black Friday and Cyber Monday deals are running wild all over the globe and consumers are eligible to get big discounts and free gifts on different products. So, how could Huawei remain out of this discussion? However, Huawei is offering 100 percent off the deal in the U.S.

Huawei recently posted a Tweet, “Black Friday special! 100% OFF all phones we currently sell in the U.S.”. This is quite an amazing deal that you cannot get anywhere else in any other country or offer by any other smartphone maker.

Black Friday special! 100% OFF all phones we currently sell in the US.🙃

Everyone thought that this tweet of “100 percent off on all Huawei phones in the U.S.” is true and the comment system is filled with good and fun pokes at the Chinese tech giant. Even the famous YouTuber – Marques Brownlee also shared the tweet screenshot and shared it on his Twitter account.

However later on, after calling on the replies, Huawei USA has made another tweet and wrote the following to confirm that it was just a joke, as it cannot sell new smartphones in the U.S.

“OK, everyone. It’s just a joke. We can’t sell anything in the USA Loudly #ReadyWhenYouAre”

This tweet is followed by some of the good replies from the fans. As the company makes us remember of the U.S. sanctions imposed since May 2019.

Back in 2019, the U.S. commerce department added Huawei into Entity List. This bans the Chinese tech maker from accessing U.S.-originated or related technologies such as chipsets and other required components to build new products.

Moreover, Huawei has to give up on Google Mobile Services (GMS) in the aftermath of these scenarios, which has caused a big dip in its smartphone shipment. Yet, the Chipset part has hurt the mobile business the most.

Still, Huawei is trying to establish alternative supply chains and wants to dig deeper into the manufacturing part. Also, the tech giant is seeking ways to stay active to launch new smartphones. However, the entire recovery may take some time to get Huawei roaring back again.

Huawei will launch a variety of new products in December: Tipster