The MIUI 13 is based on Android 12 and comes with new features that drive Xiaomi phones on top of their ecosystem. The latest Xiaomi MIUI 13 is no exception to the theory of the cool feature including the new Widgets system. The Xiaomi MIUI 13 widgets bring you a lot of accessibility and free-form placement of widgets through dragging and dropping on any place of the home screen.

The widgets now have different sizes to fit on your phone’s home screen along with other app icons. Moreover, the MIUI 13 will allow you to match widget colors to their corresponding apps. In terms of design, the widget has various new features that give you easy access to the app such as Health and fitness counter without opening the app itself.

There are also some tiny changes that have been made to the shape of these icons to provide you with a cutting-edge solution on the software side. If we talk about similarities, the MIUI 13 widgets replicate heavily to Huawei HarmonyOS, which has a new widgets system.

However, the new Xiaomi MIUI 13 widgets have also been derived from the core Android and establish a connection between the information and the process that is being compiled by the app and presented to you on the screen.

Xiaomi is currently expanding MIUI 13 among smartphone users and will bring you a new kind of user experience. Meanwhile, if you are eligible to download or test this new MIUI version then we definitely encourage you to step foot into it. 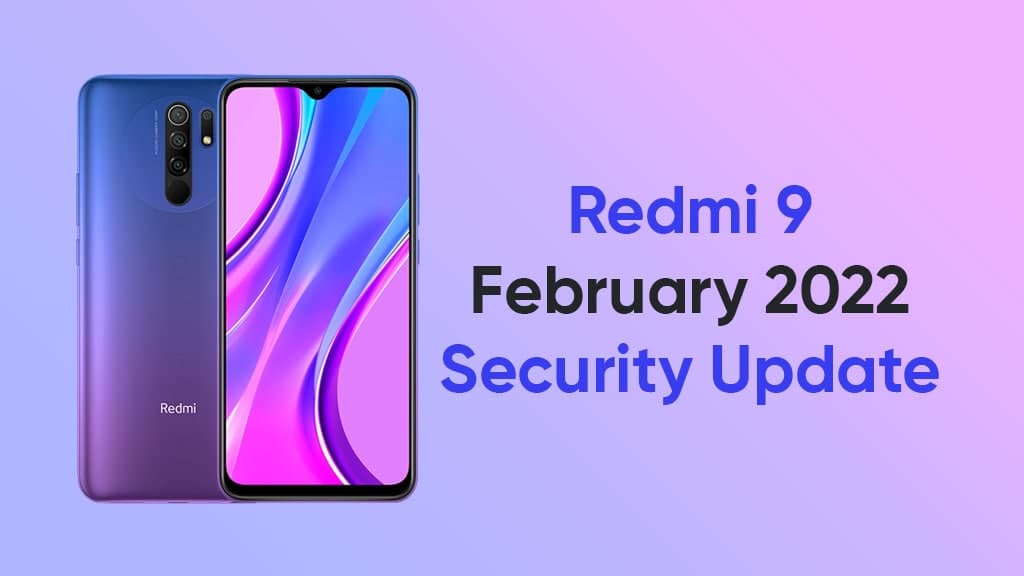 Xiaomi has started sending the February 2022 security update for its cost-effective smartphone Redmi 9. The update is circulating in Indonesia through the OTA (over the air) medium. This security patch is rolling with MIUI 12.5/Android 11 software version.

Meanwhile, the users in Europe are receiving the January 2022 security patch for the same device along with the same software. These patches provide bug fixes and improvisations to the issues and errors.

The February 2022 security update for Redmi 9 smartphone is available with a specific build number which is V12.5.3.0.RJCIDXM. Further, it holds a package size of 2.5GB. On the contrary side, the European users are accessing the January 2022 security patch as V12.5.4.0.RJCEUXM with the same size.

Xiaomi releases a bunch of security patches in a month for several of its devices around different regions. But why?
These patches are meant with the purpose of resolving the conflicts and vulnerabilities that are been faced by the device.

In other words, the security patches mend the defects of a device that the users confront while operating it. Thus, it improves the functioning management and makes increases the reliability of the internal mechanisms.

The budget-friendly smartphone appears with a display design of a 6.53-inch IPS LCD that carries a resolution of 1080 x 2340 pixels. It has a pixel density of 395 PPI (Pixel Per Inch). Further, it powers an octa-core chipset of MediaTek MT6769V/CU Helio G80 along with Mali-G52 MC2 GPU.

Apart from the optical concern, the smartphone packs an irremovable battery with a capacity of 5020mAh that gives a rapid charging of 18W. 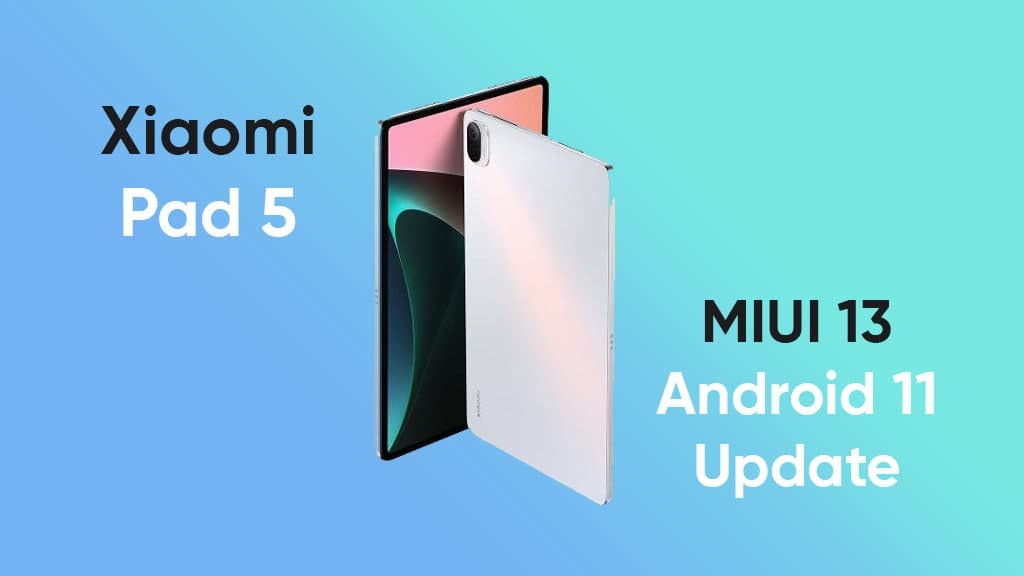 Xiaomi has begun expanding the MIUI 13 software update for its large screen device Xiaomi Pad 5 in Taiwan. The software remains on Android 11 at the moment. Yet, users can find surprising new features for their devices with better-operating mechanisms.

The OTA update appears with many customizations and implements for the huge screen gadget. On the other hand, it brings a new updated security patch for the device that delivers amendments for the bugs and errors.

Xiaomi Pad 5 get Android 12 in China:

Xiaomi Pad 5 has received the Android 12 operating system along with the latest interface MIUI 13. The initial rollout took place in China with several exclusive features and improvements for the device. Although, the user demands a large screen-related software update – Android 12L rather than Android 12 OS.

As for now, Xiaomi is treating the Android 12 based MIUI interface with fine structure and functions for the huge screen devices. Therefore, Xiaomi Pad 5 users have to settle down with the Android 11 system.

Xiaomi Pad 5 devices in Taiwan receives the MIUI 13/Android 11 update with a particular build number which is V13.0.2.0.RKXTWXM. Whereas, the update size of the software weighs a size of 2.8 Gigabytes.

The users have to keep in mind, the following instructions before proceeding with the installation: 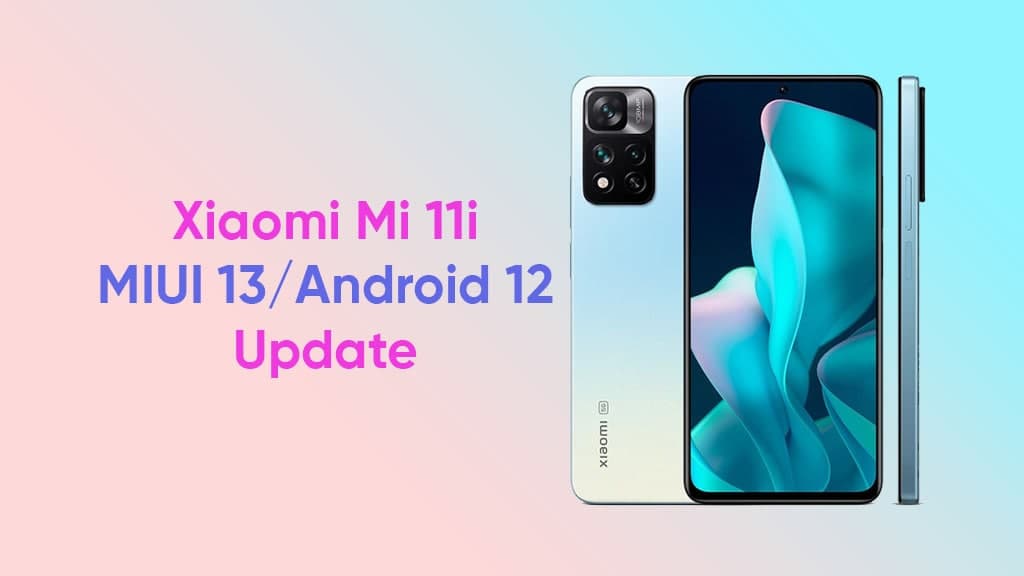 Xiaomi Mi 11i smartphone users are receiving the major update of MIUI 13.0.1.0 rooted over the Android 12 operating system. The update is available globally through the OTA (over the air) format. This time, the Chinese company has rolled out the major update along with a new security patch for the device.

Being an OTA update, the software update may take a while to approach all the eligible units of the device across the globe. However, the users can direct themselves towards the Settings menu of their device for checking the update manually.

As per the source, the global users are attaining the MIUI 13.0.1.0 software update for their Mi 11i smartphones with build number V13.0.1.0.SKKMIXM. Whereas, the package size of the software weighs up to 3.5GB.

Along with Android 12 stability, the latest MIUI interface offers new wallpapers, customizable widget sections, finer system functionalities, and much more. Furthermore, it provides an enhancement to a number of applications. These enhancements are either with the increment in their access or marking smooth operations.

While exploring the changelog of the MIUI 13 system, we found limited features for the super handset. Though, there are expectations, to receive new and more features of the interface soon for the mentioned device. Here is the list of elements, that users can observe in the newest update.

The users can upgrade their smartphones to the latest software by heading towards the Settings menu of their device. Then, select the System Apps Updater and further click on the MIUI Version. The device will fetch up the new updates and will display them on the screen. For the appropriate one, tap on Download & Install.