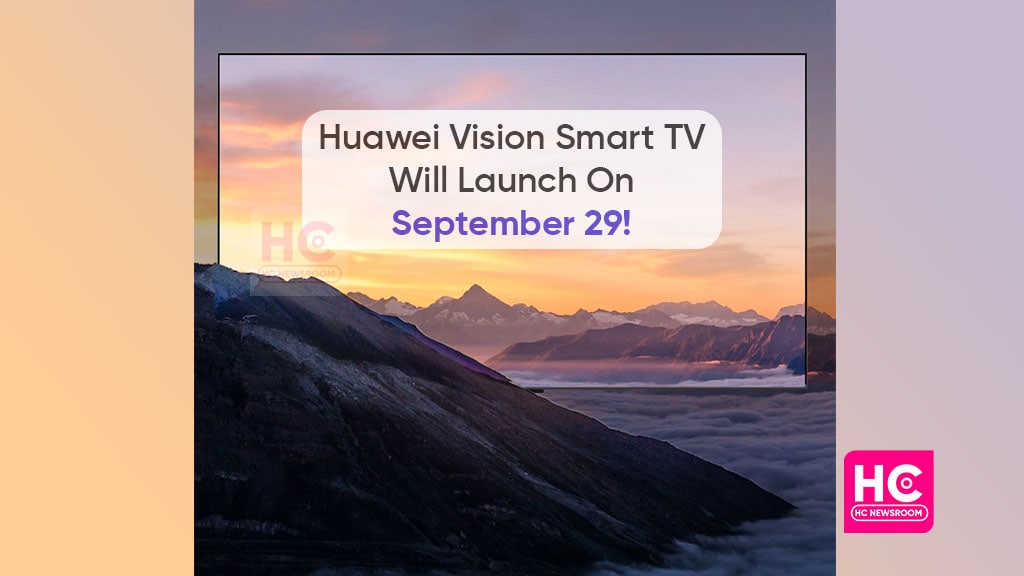 Yes! It’s official now. Huawei has announced the launch date for its most-discussed and anticipated gadgets – the Vision Smart TVs. The company has decided to unveil the device on the consumer platform on September 29, at 19:00 time.

Earlier, the Chinese manufacturer scheduled the release date for Huawei Vision smart TVs on September 26, with the same timing. However, for some unknown reasons, the company missed the date and didn’t say a word on this matter.

On the flip side, we came across many rumors and speculations about the upcoming smart screen models. But, in the end, we have finally started walking on the right track and within a few hours, we will catch our first glimpse of the Vision smart TVs.

Speaking of the latest information, Huawei has shared a huge poster of the Vision smart screen with its release date on Weibo. Alongside this, it informs consumers to get ready to witness the launch of the new product in the live broadcast. 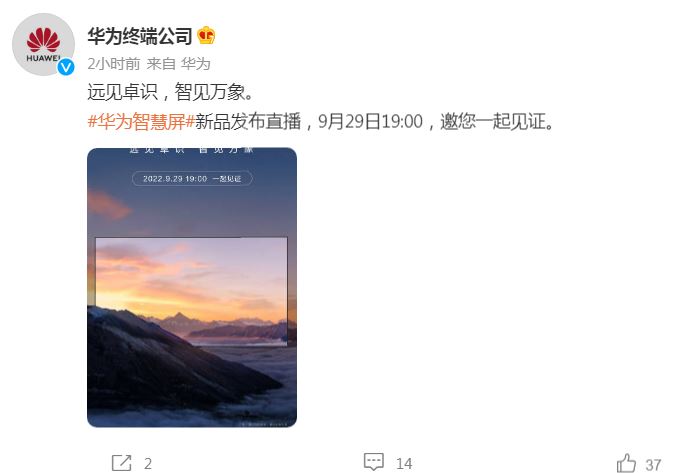 Will Huawei Vision Smart TV go on sale in October?

Earlier, some Weibo tipsters stated that the new Vision smart screen series will go on sale on October 14, and October 31. Based on this speculation, Huawei hearsay to bring the respective devices on the ground by the first week of October.

Ultimately, the delay is over and we have the official confirmation for the first appearance of the Vision gadgets. Concerned with sale timing, there are chances that we may find these devices on the same date as mentioned by the tipster.

Another piece of good news is that four new devices are taking place in this Vision series. Consequently, there will be two standard versions and two gaming editions. Further, each device will carry some fresh and unique tweaks on its surface.

The four smart screen devices are as follows:

What else? Well, we still have to wait until tomorrow to see the speculations turning into reality. So get ready to explore a new visual experience and vibrant adventure with the upcoming Vision smart screens. 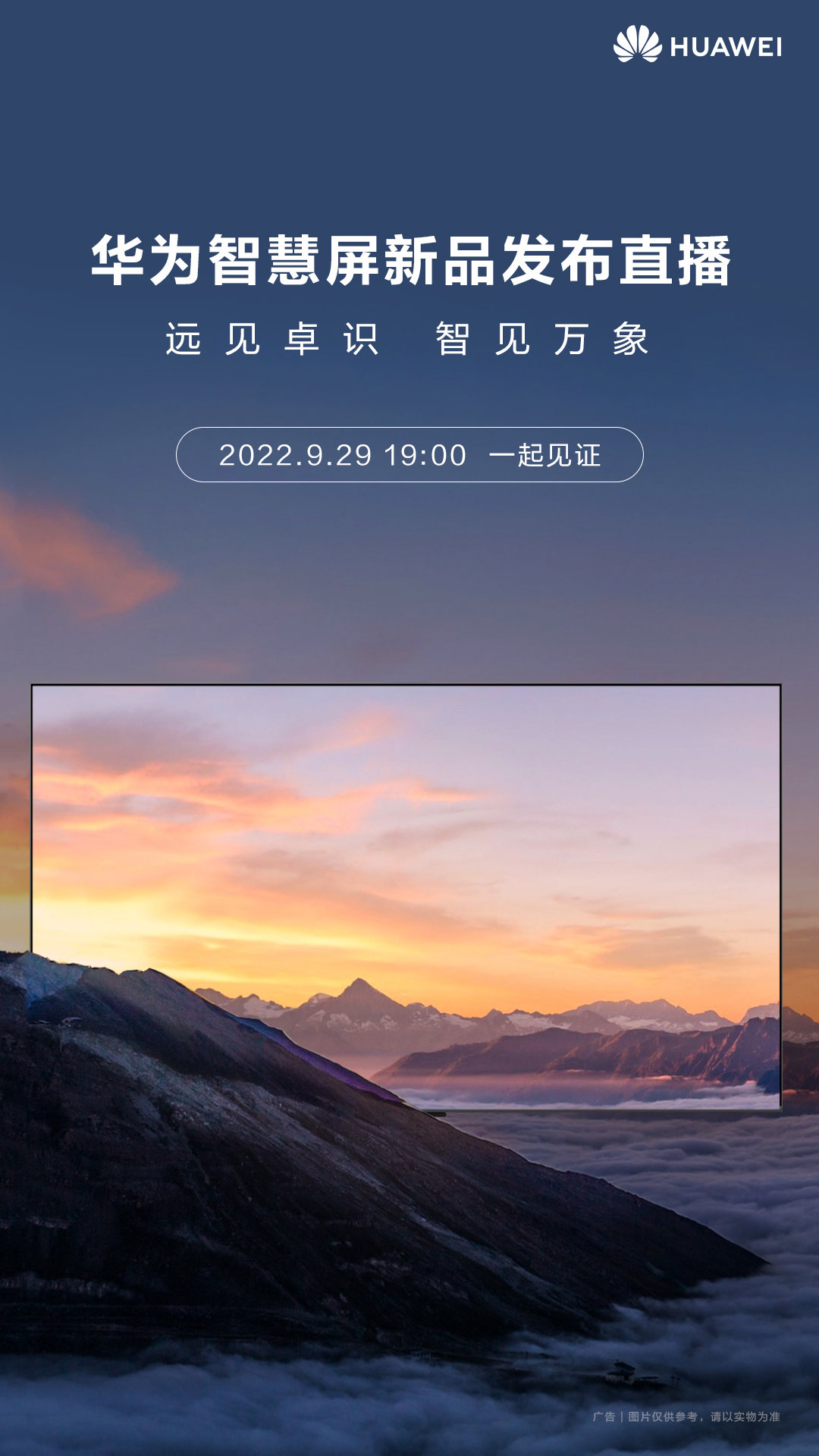 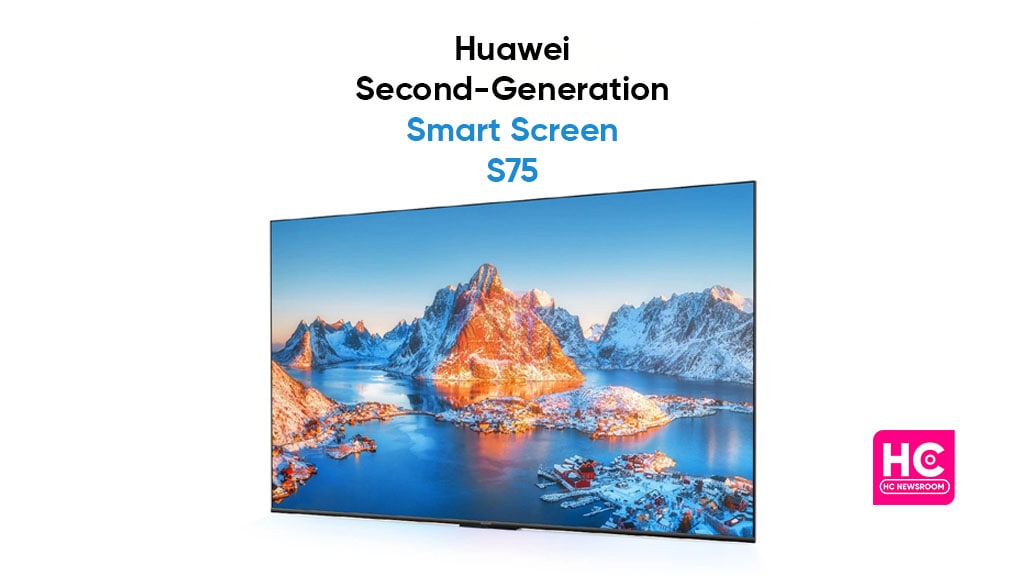 Today, Huawei will officially launch the second-generation Smart Screen S75 tomorrow (November 25). The newly-developed gadget is holding a bunch of eye-catching features and interesting functions on its board.

According to the information, the second-generation Smart Screen S75 sports a 75-inch LCD panel. This panel provides a resolution of 3840 x 2160 pixels. Besides, it exhibits a refresh rate of 60Hz.

The next significant addition is the dynamic speakers. Huawei has imposed the smart screen with a MEMC four-speaker framework. This technology possesses several features. For instance, virtual sound expansion, human voice enhancements, dynamic loudness, and provides an immersive audio experience.

In terms of performance and functioning, the device equips a quad-core chipset. This processor is based on the 3GB + 32GB combinations and offers a high-effective speed rate for upload and download purposes. It also packs HarmonyOS 2.1 operating system.

In terms of pricing, Huawei will launch the second-generation smart screen S75 with a price tag of 5999 yuan. So get ready to explore some new and advanced features with the smart screen S75 gadget. 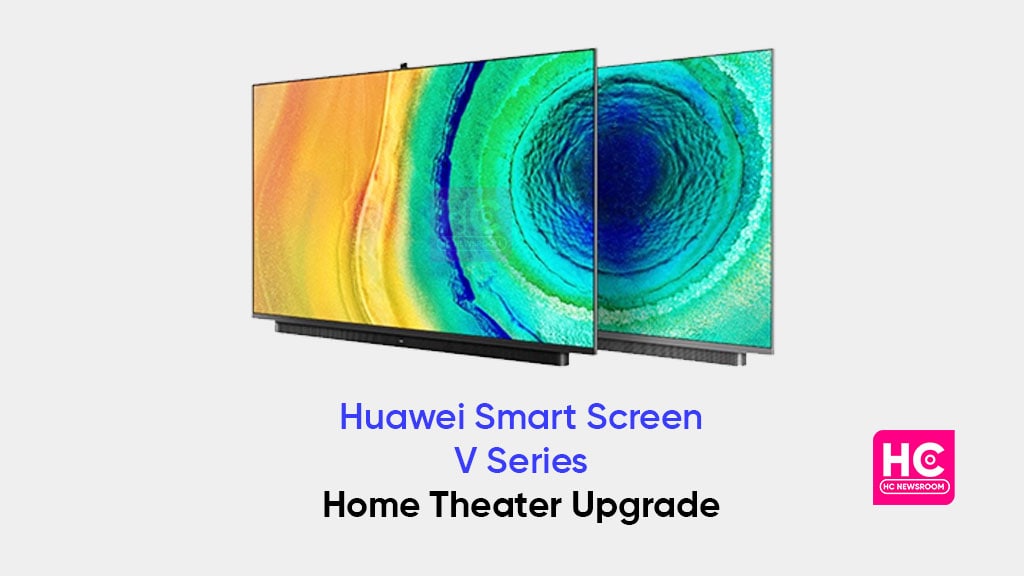 Huawei smart screen devices will take a new makeover in the coming days. The latest information hints that the first generation Huawei smart screen V series will support the wireless (distributed) home theater system by the end of this month.

To be mentioned, a wireless home theater system enhances the audio and video content by converting their signals into a radio frequency wave. Eventually, this wave ranges from 2.4GHz to 5GHz and results in a high-quality experience.

Alongside distributed home theaters, Huawei will also impose smart speakers on the corresponding V series models. Consequently, this change will come into existence with the next upgrades by the end of this month.

Huawei shared the new tweaks for the smart screen V series on its official support page. Accordingly, the first generation consists of the smart screen V75 (2019), and smart screen V55i (2020). As a result, users running these devices will soon get a thoughtful update.

Further, the company has also explained how the home theaters are applied to the smart screens. Generally, there are two ways: 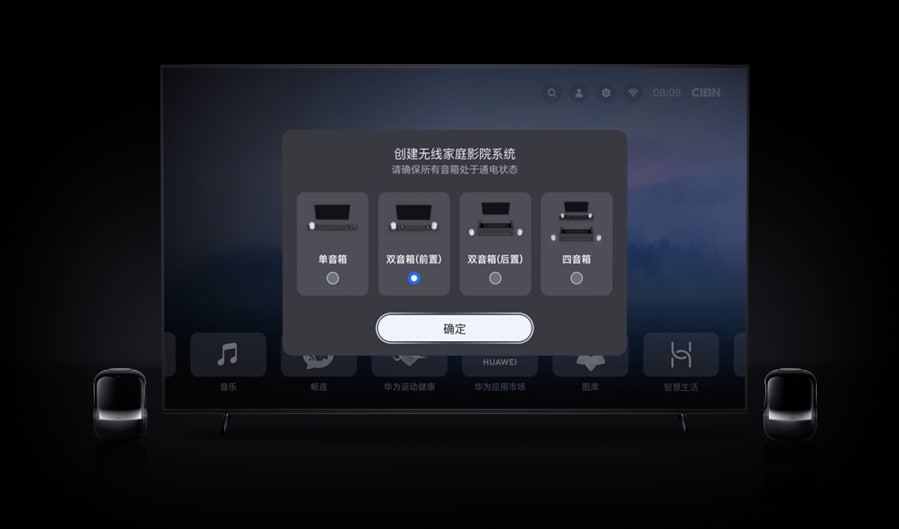 In addition to the upbringing, the company also shared a list of smart screens that support the creation of wireless home theaters and Huawei Sound speakers in both manual and automated ways.

It’s worth mentioning that some of these devices are compatible to support four-speaker mode and deliver an immersive audio experience. As of now, we are waiting to see what the next smart screen V series functional upgrade will offer to users. 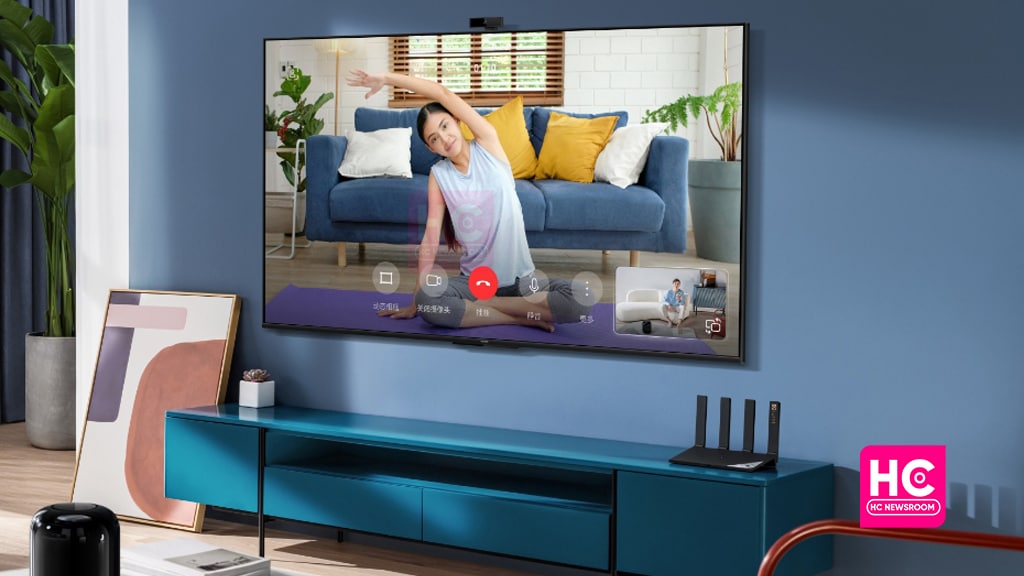 JD Double Eleven Promotion is offering some amazing surprises to Huawei fans. After the MatePad Pro 11, it’s time for the Huawei Smart Screen SE 65-inch device to get a new low in their price.

Eventually, the Huawei Smart Screen SE 65-inch product is now coming at a new price for consumers. Instead of paying the heavy amount of 2499 yuan, now you can get the respective gadget for just 1659 yuan [228.93 USD].

Since it’s the Double Eleven Promotion event, low prices on devices are available every day. However, you need to follow some regulations to take the advantage of this event. The same goes for the Huawei smart screen SE 65-inch.

Though the event price for the respective device is 1899 yuan. However, with additional coupons and benefits, you can get the device for 1659 yuan only. In other words, you need to deposit 20 yuan to grab the new low on Huawei smart screen SE. 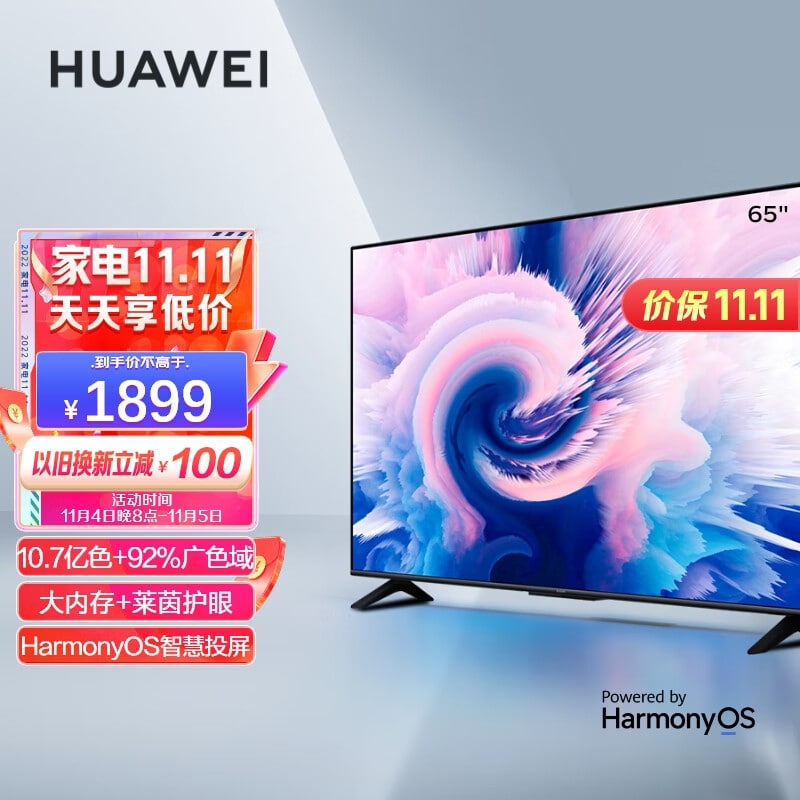 After paying 20 yuan, you will instantly get a 50 yuan discount on the placed order. Besides, if you have a membership of the official self-operated JD channel and the Home Privilege card on 9.9, then you can gain a coupon of 40 yuan.

Moreover, your luck can also drag you toward the 50 yuan coupon. Together, these discounts will drop the price of Smart Screen SE 65-inch to 1659 yuan.

And let’s not forget about the red envelopes. They are still present on the online shopping platform. These envelopes hold several surprises that can open doors to more devices and products.

So tap on the above-given link and explore a new world of surprises with the Double Eleven Promotion event. Remember, the offer lasts only till November 11.