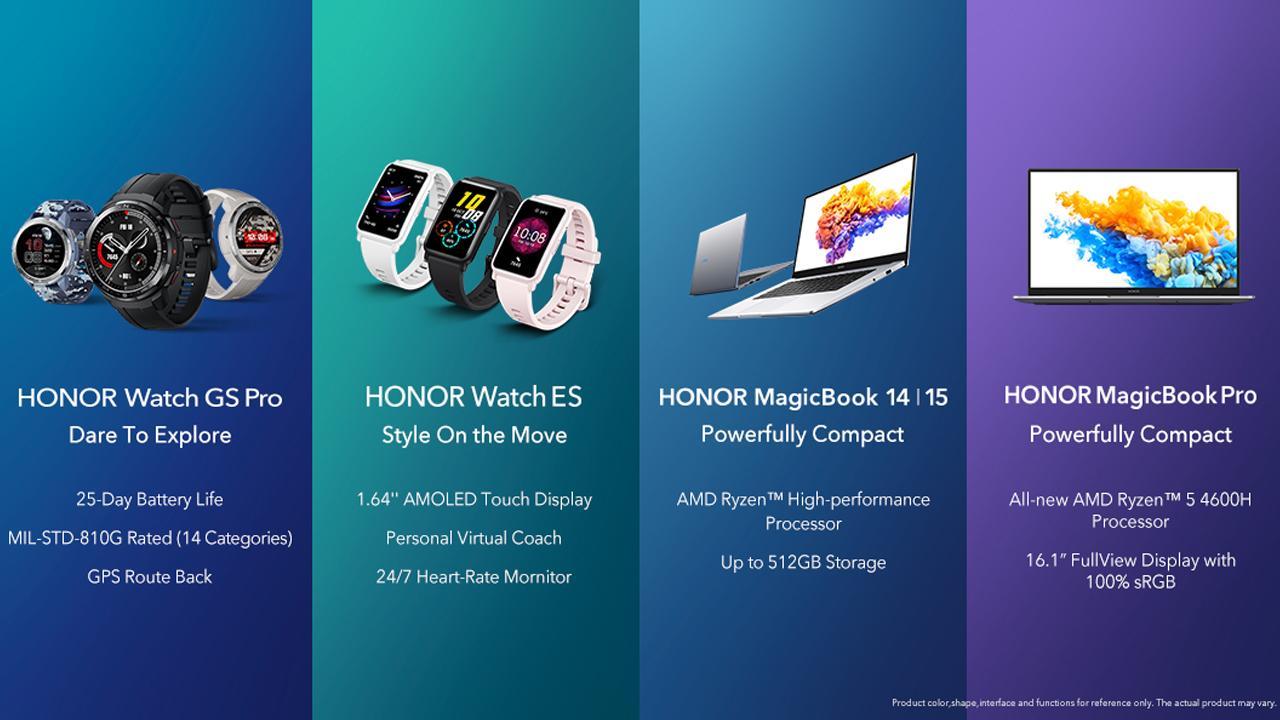 On September 4, at IFA 2020, Honor launched its new products for global consumers, covering segments such as smartwatches, laptops, and tablets and includes the following products.

The watch has built-in dual satellite positioning systems, celestial data & bad weather alert, and a big AMOLED display surrounded by stainless steel bezel. Other important features of this watch include the SpO2 blood oxygen saturation test and Bluetooth calling directly on the watch.

Honor Watch GS Pro comes in black, white, and blue color options and will be available starting September 7 in the UK, France, Germany, Italy, and Spain at €249.99.

The battery life of Watch ES stands up to 10 days and have features such as message and call reminder. It also offers health features such as the Truseen 4.0 heart rate monitor and female cycle tracker, as well as sleep and stress monitor

Honor Watch ES priced at €99.99 and it’ll be available in the UK and Germany starting September 7. More European markets will be added later this month.

Back in July, Honor initially unveiled the Honor MagicBook 14 and MagicBook 15 notebooks in China. These two laptop packs with a new 7nm AMD 4000H processor alongside other latest specs for increased performance.

The Honor MagicBook Pro starts at €899.99 and it’ll be available from September 7 in the UK, France, Germany, and other European markets. 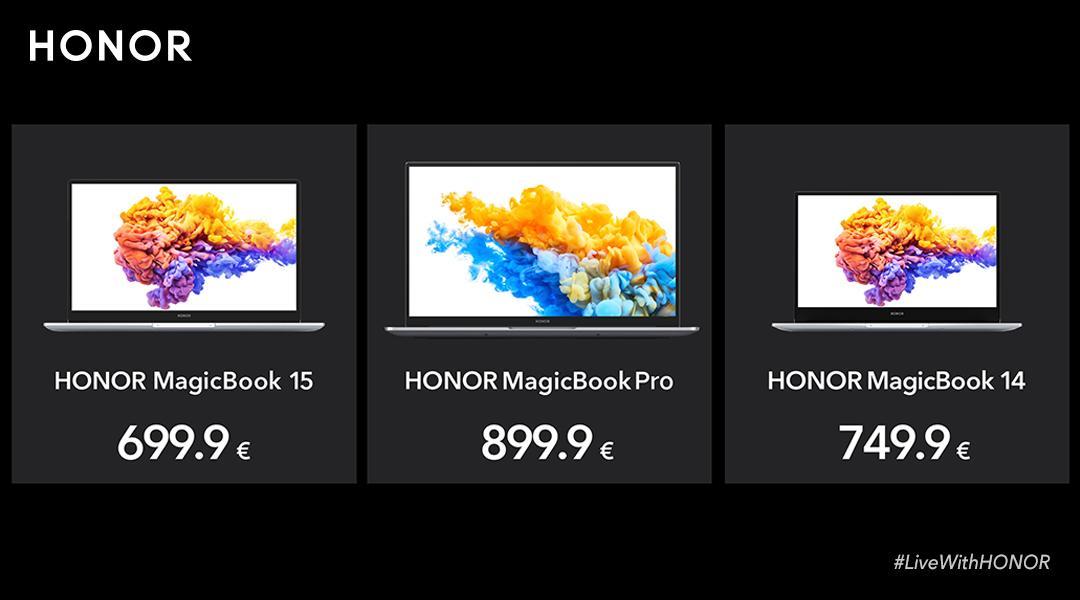 Similar to the MagicBook notebooks, Honor Pad 6 and X6 are already launched in the Chinese market and now, Honor has introduced them for the global consumers.

Also, both of these tablets equips the latest Kirin 710A processor. The architecture of this chipset includes 4×Cortex A73 2.0GHz + 4×Cortex A53 1.7GHz. On the other hand, it has Mali G51 GPU.

Honor is yet to release the price and availability of Honor Pad 6 and X6 tablets. 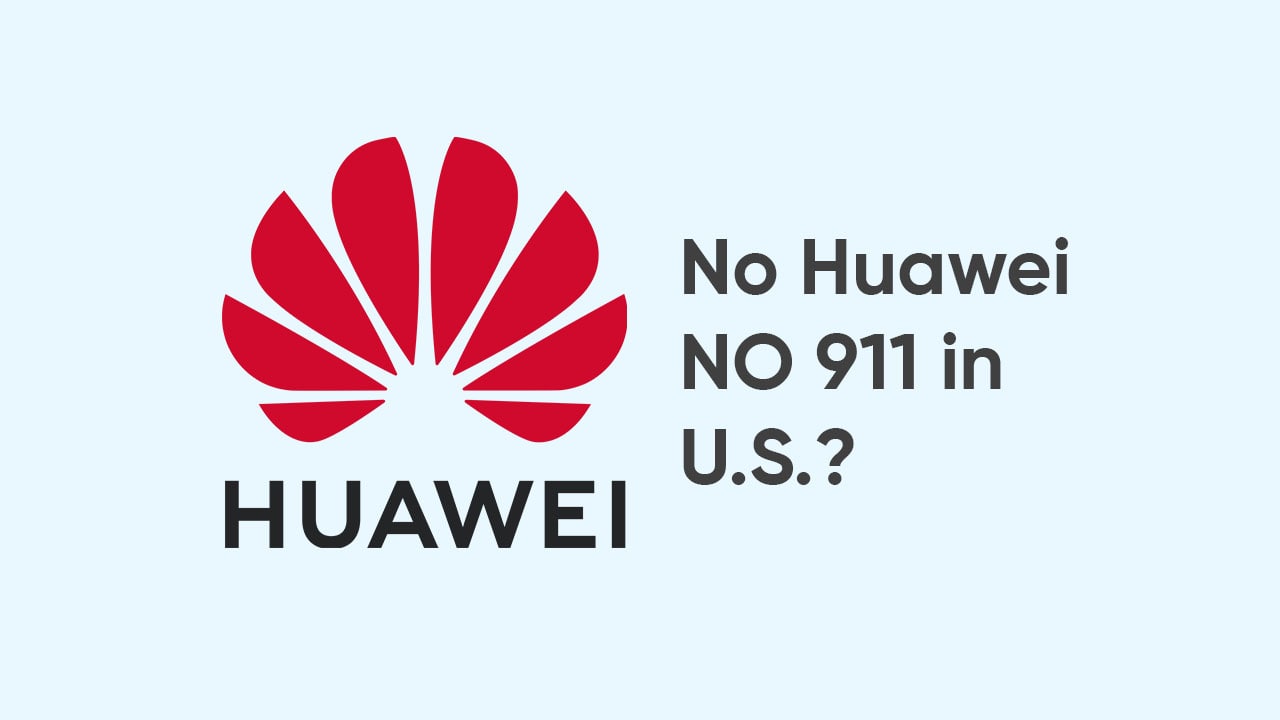 The U.S. banned Huawei in the name of security threats but the company has always denied it as no evidence has been found in the process. However, no one cannot deny the reach and accessibility of Huawei network equipment as it helped the company to become and remain the largest network equipment maker for years and it Huawei could also affect essential services such as 911 in the U.S.

Following the U.S. ban, Federal Communications Commission (FCC) has announced to remove all of the Huawei and ZTE made network equipment from their home-based network carriers as well as other carrier services in all sectors.

Later on, FCC announced a fund that will help carriers to remove and replace network equipment made by Huawei and ZTE as well as other blacklisted network gear makers. However, the fund wasn’t found to be sufficient and FCC then had to revise its plan and increased the overall supporting fund.

As recently, an interesting input coming from Bloomberg suggests that network carriers are still struggling to get over the Huawei network gear replacement. The main reason behind this havoc is related to the overall fund that is approved for the removal procedure.

Data suggest that over 100 telecom providers across the country connect calls for hundreds of thousands of people with network equipment made by Huawei and ZTE. This is quite a big challenge for FCC to cover and address in the latest scenarios.

Carriers are worried about the reinstallation of new equipment without adequate funding, which could cause issues in essential services such as 911 or halt it together in key U.S. areas after replacing equipment from Huawei.

The report mentions that firms including United Wireless Communications, which services 17 countries in Southwest Kansas, is choosing the services that it needs to chop if they don’t get sufficient funds to replace the network equipment.

If United Wireless doesn’t get enough of the $173.5 million it’s seeking from the FCC, cellphone connectivity at the lake, including 911 service, will be cut. If the subsidy is reduced too much, the company might have to shut down.

While in availability, Huawei has brought in cheap yet effective network services for network service providers, which are available around the globe but U.S. carriers are now realizing that it won’t be easy to leave Huawei’s hands so easily.

911 lines are designated for emergency calls, such as reporting a crime in progress, reporting a fire, or requesting an ambulance. 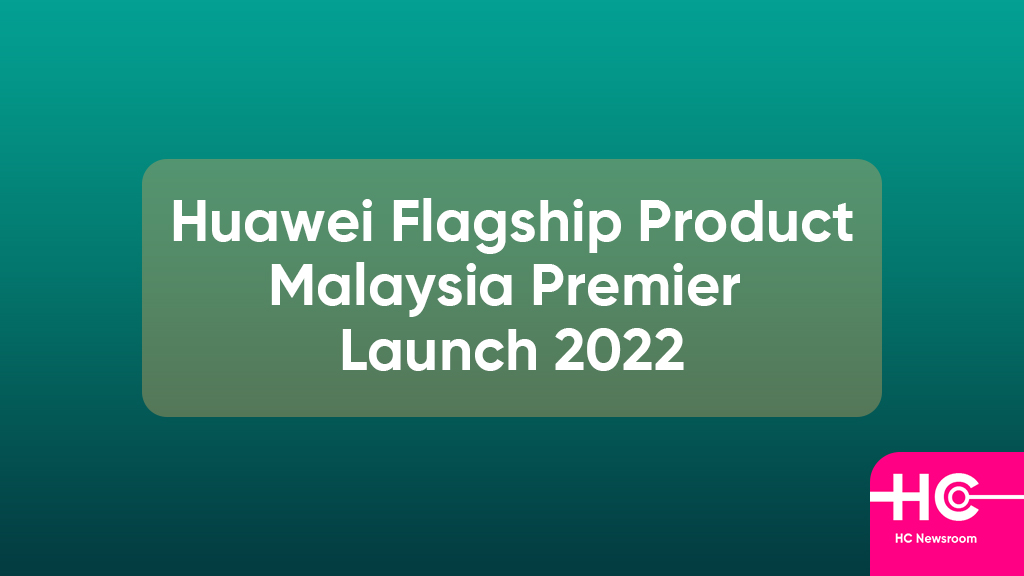 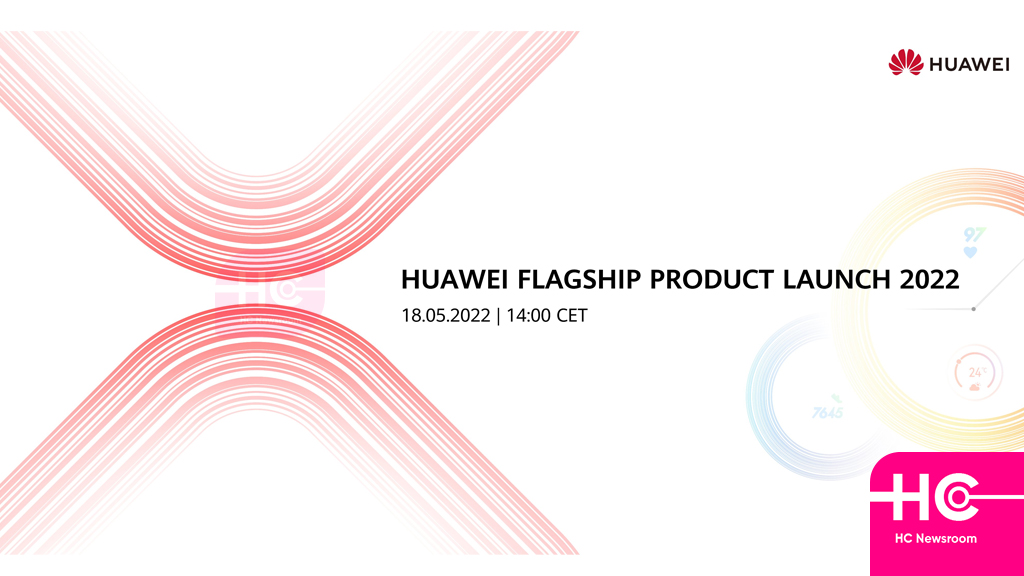