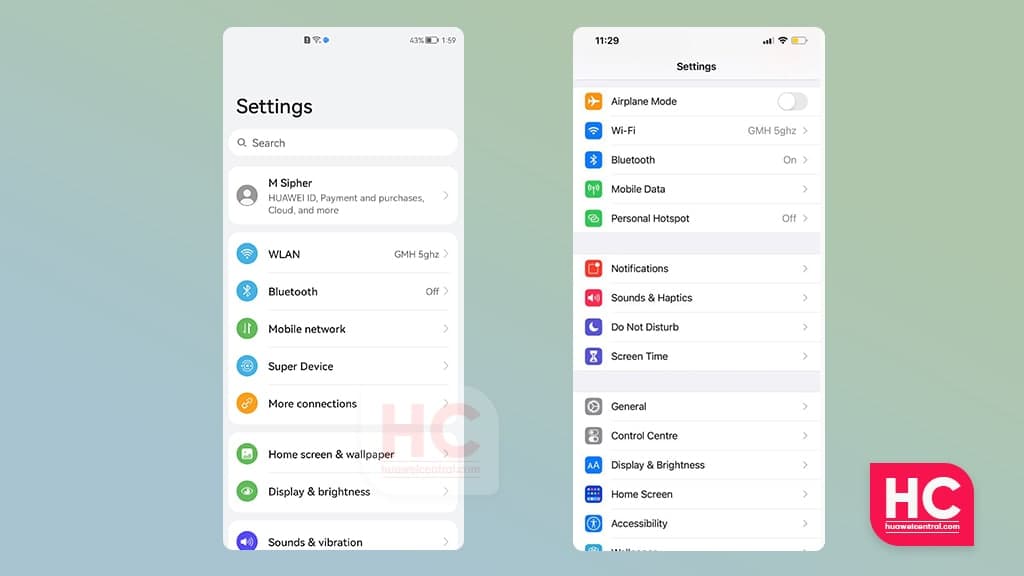 We recently conducted a comparison between HarmonyOS 2 and Oxygen OS 11 in terms of the Settings menu user interface as well as design parameters. Today, we’ll compare iOS 14 and HarmonyOS 2 for the same feature.

iOS 15 is also under development and Apple is also looking to introduce this new software on iPhones. Since the software is still under beta testing, we look back to iOS 14, and is perfect for our comparison.

So, without further ado. Let’s begin our iOS 14 vs HarmonyOS 2 Settings menu comparison.

The icons are colorful and remain vibrant even in the dark mode feature. Also, the description of some options is very informative and helps users to learn more about the corresponding feature.

The operation around the UI is very simple and enables the gentle transition from one screen to another to provide a good user experience. 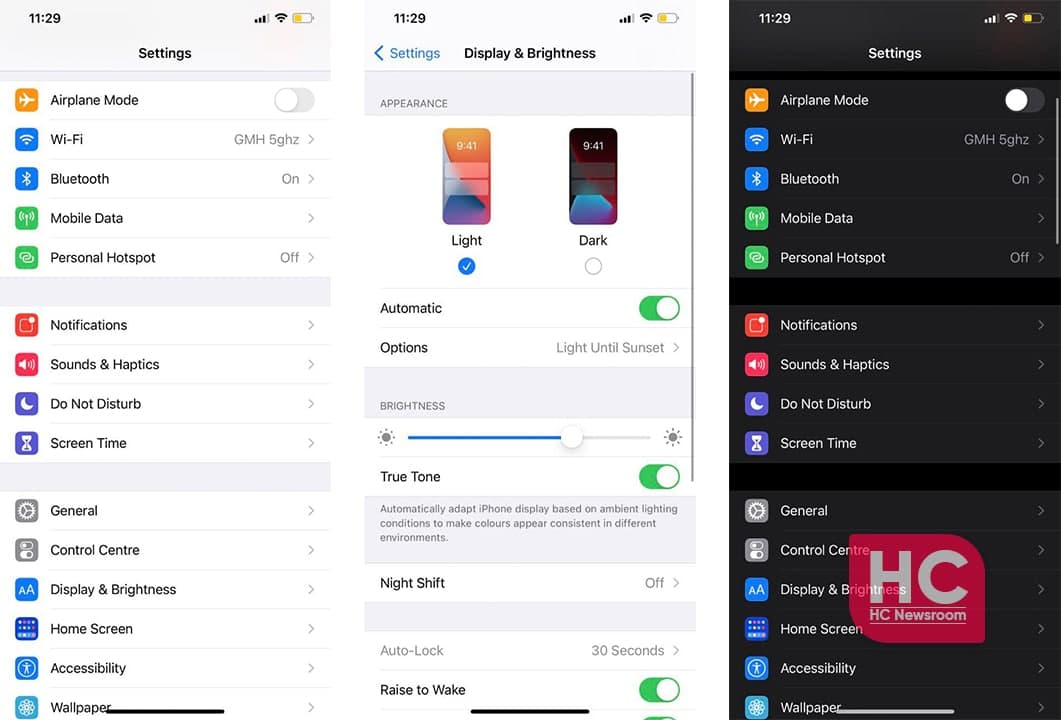 Huawei HarmonyOS 2 settings menu has its own uniqueness, the round corner background container enhances the look of a particular set of settings elements. 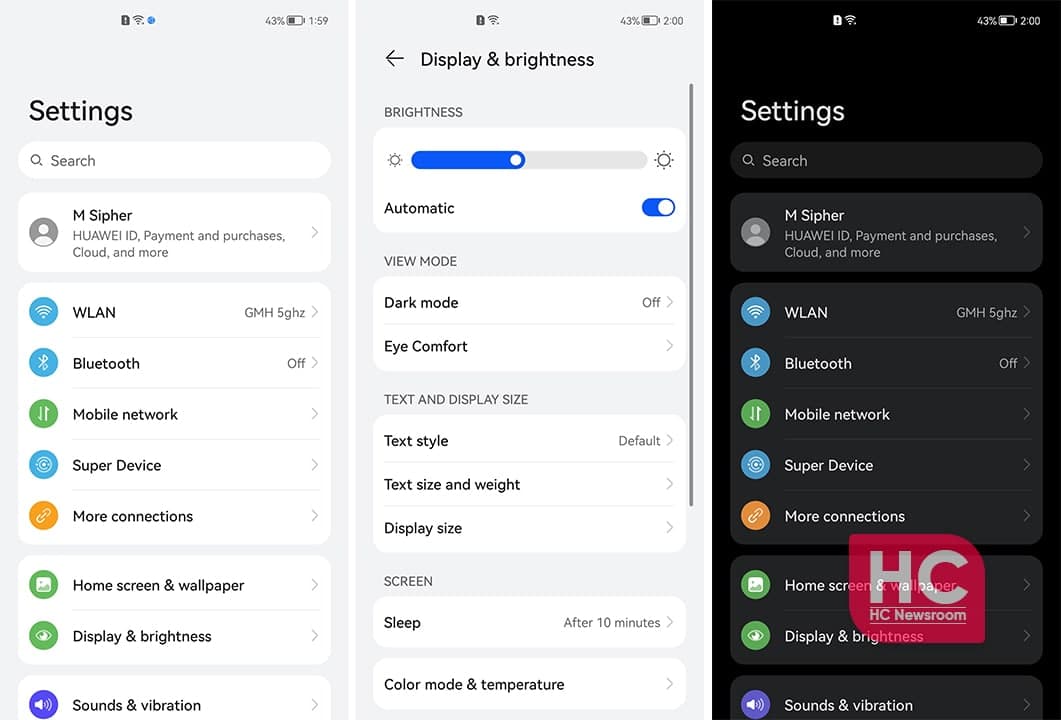 The HarmonyOS fonts appear elegant alongside the well-baked icons on the same row. The animation and transition are quick and smoother than the iOS.

Furthermore, the dark mode feature in HarmonyOS provides a better user experience and low contrast compared to iOS 14. Therefore, the overall Settings menu and the layout are provided better in this new operating system.

Advertisement
Related Topics:ComparisonHarmonyOSHuaweiiOS
Up Next 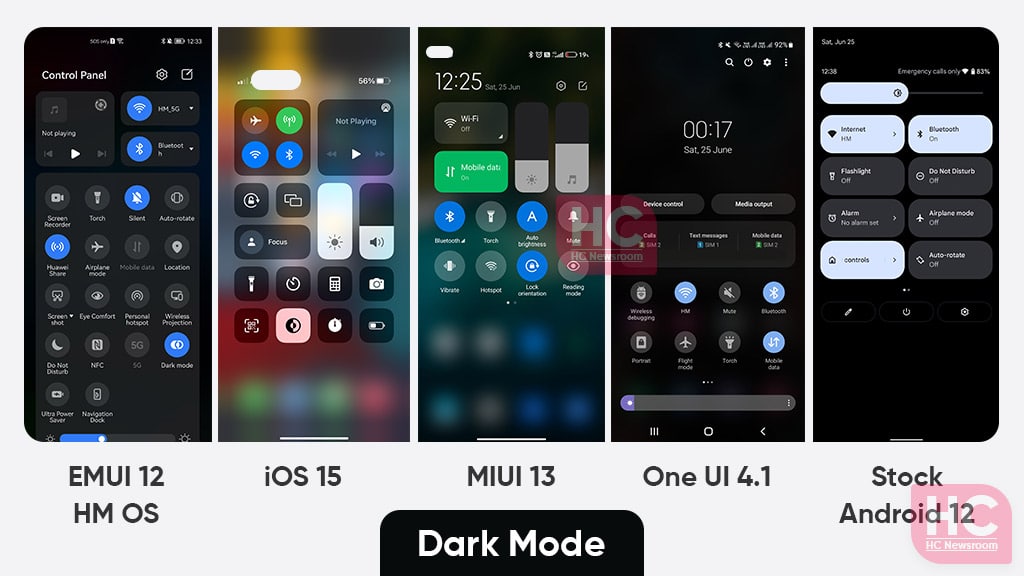 Dark Mode is a feature that we all love to use and it nowadays works on all major smartphones but appears a bit different. Therefore a comparison between Huawei EMUI 12, HarmonyOS 2 vs Stock Google Android 12 vs Samsung One UI 4.1 vs Apple iOS 15, and Xiaomi MIUI 13 for dark mode feature has been arranged to see the changes these softwares bring to the most common parts of the user interface.

Dark Mode is a feature that is now available as part of Android, HarmonyOS, and iOS software. The feature helps you to apply a darker color scheme over the light interface to prevent eye strain in low light conditions. On the flip side, the dark mode also saves battery.

What are we gonna do?

Below, we’ll examine each of the smartphone software in their dark mode for the given part of the user interface:

As we use them the most in our day-to-day operations of smartphones.

Without further due, let’s begin our Huawei EMUI 12 vs HarmonyOS 2 vs Stock Google Android 12 vs Samsung One UI 4.1 vs Apple iOS 15 and Xiaomi MIUI 13 dark mode comparison.

In comparison to the last generation, EMUI 12 has good dark mode effects throughout the user interface, the use of dark gray and subtle black looks amazing. The use of light color icon background is really helpful and doesn’t shade much of the contrast if you look over them. Unlike the Control Panel shortcut switches, Huawei has tried to keep the user interface adequate contrast, which makes it very easy to adapt for long hours use case scenarios. 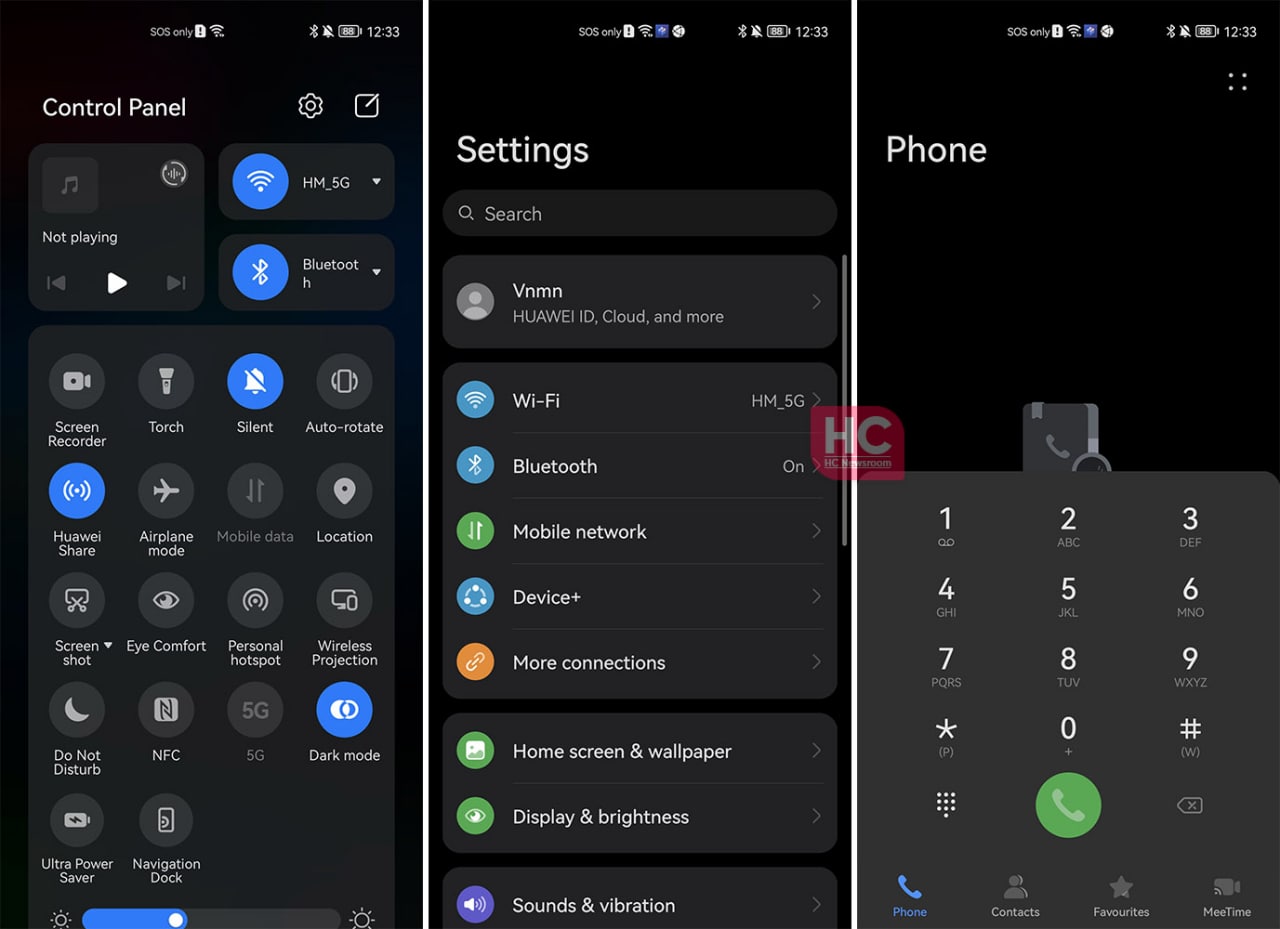 The user interface used in EMUI 12 is derived from HarmonyOS 2.0 and they both are identical. check the screenshot below. 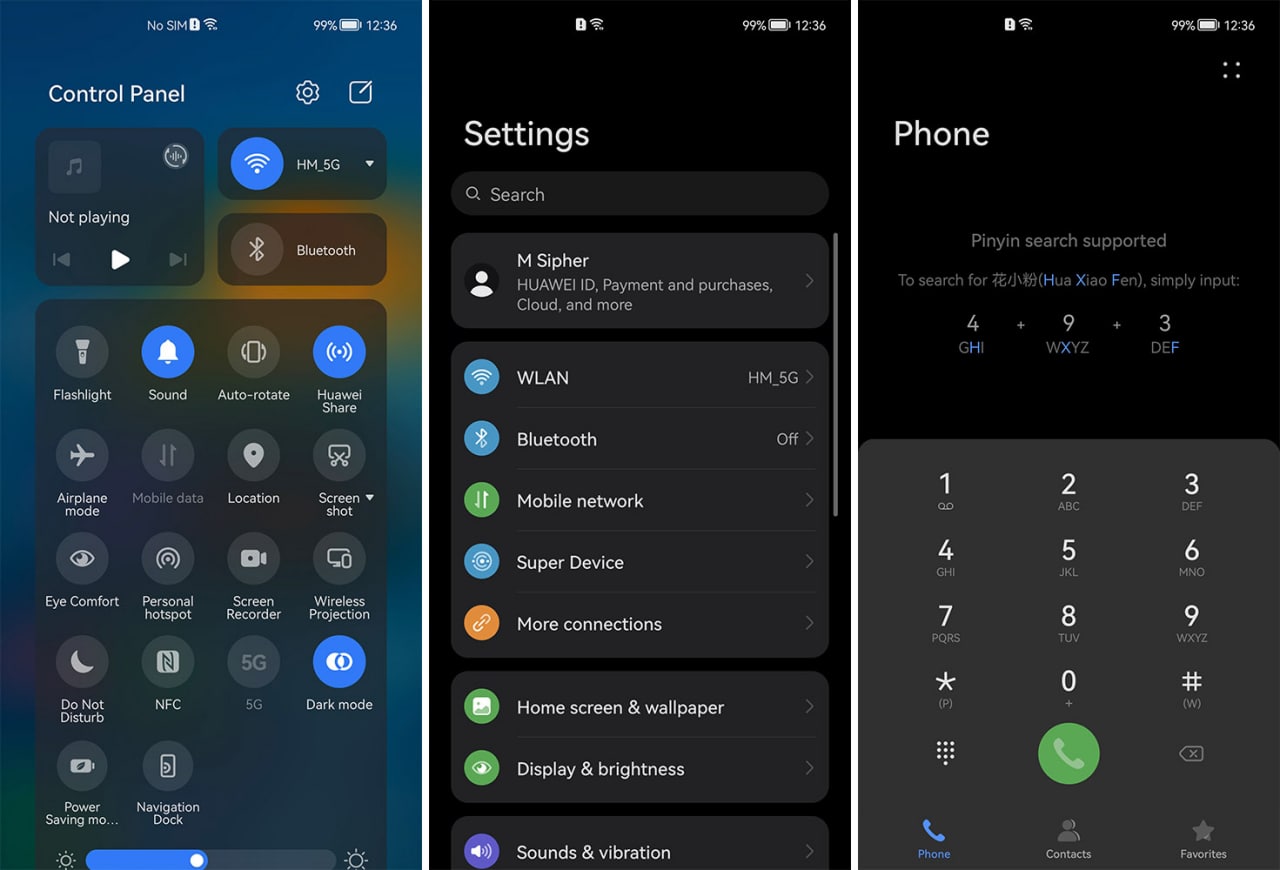 Stock Android 12 has brought a lot of new changes in the user interface, quick settings tile system, and material you design. The user interface is surely intriguing and easy to navigate but by default, the quick settings tiles on the stock Android 12 maintain dark mode. Once enabled a dark gray color is applied to the Settings menu. Moving on, the software uses Google’s Phone app’s dialer, which is also used by Xiaomi in MIUI 13. The overall look and feel of the Android 12 dark mode is satisfying. Yet, everyone is free to try the Material you dynamic theme for maximized user experience. 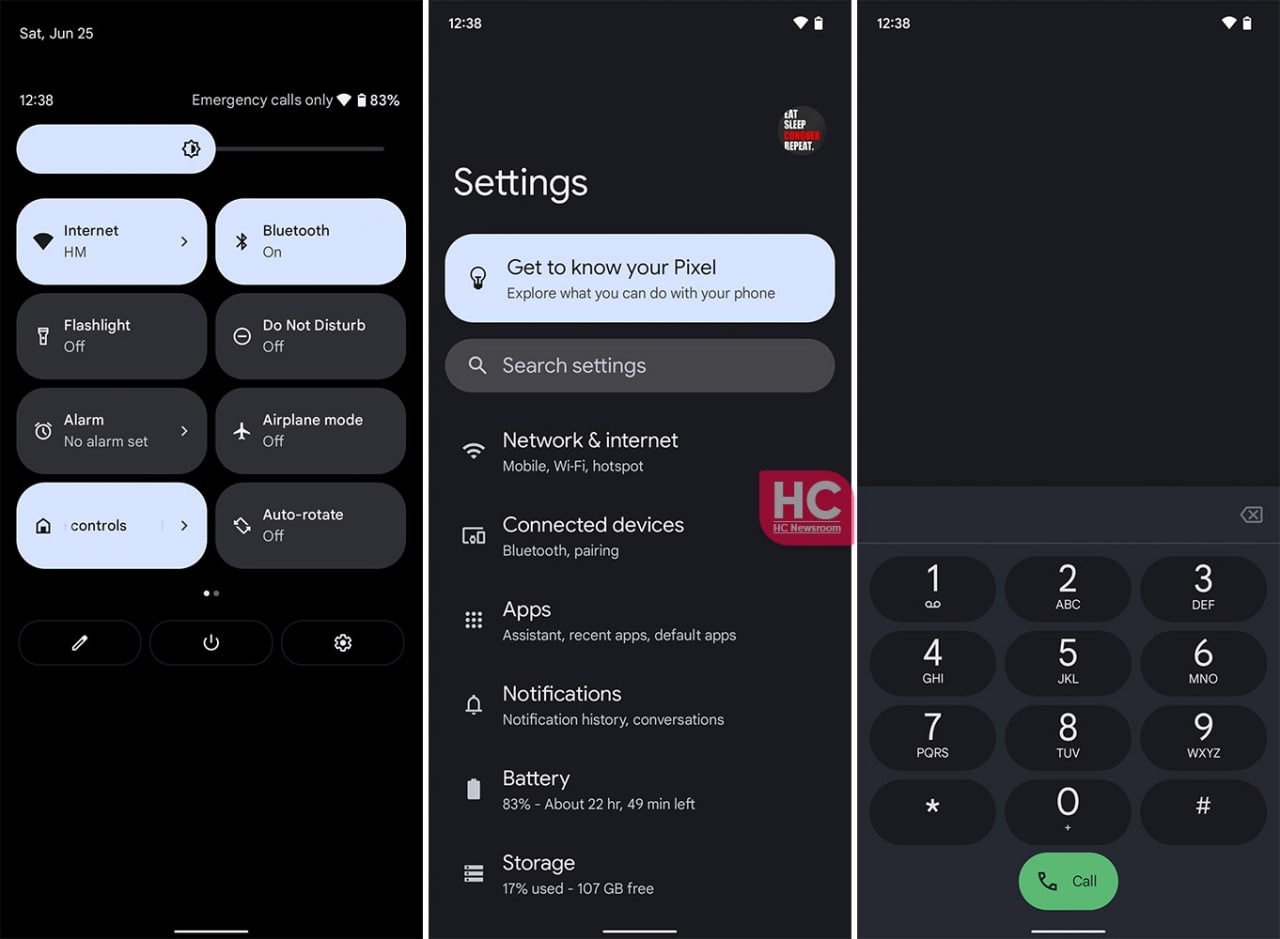 Samsung has been one of the best players when it comes to the dark mode features, the phone maker has introduced this feature on One UI, even before it came by default on the Android project.

Such as the Settings menu, you’ll find the shape of the background used in the menu items feels encompassing with the icon as well as the text label. Meanwhile, the use of a high tone on the dialer is perfect to know which button you are pressing to dial your calls.

The overall appearance of the Samsung One UI 4.1 dark mode is comfortable to the eye and it deserves praise. 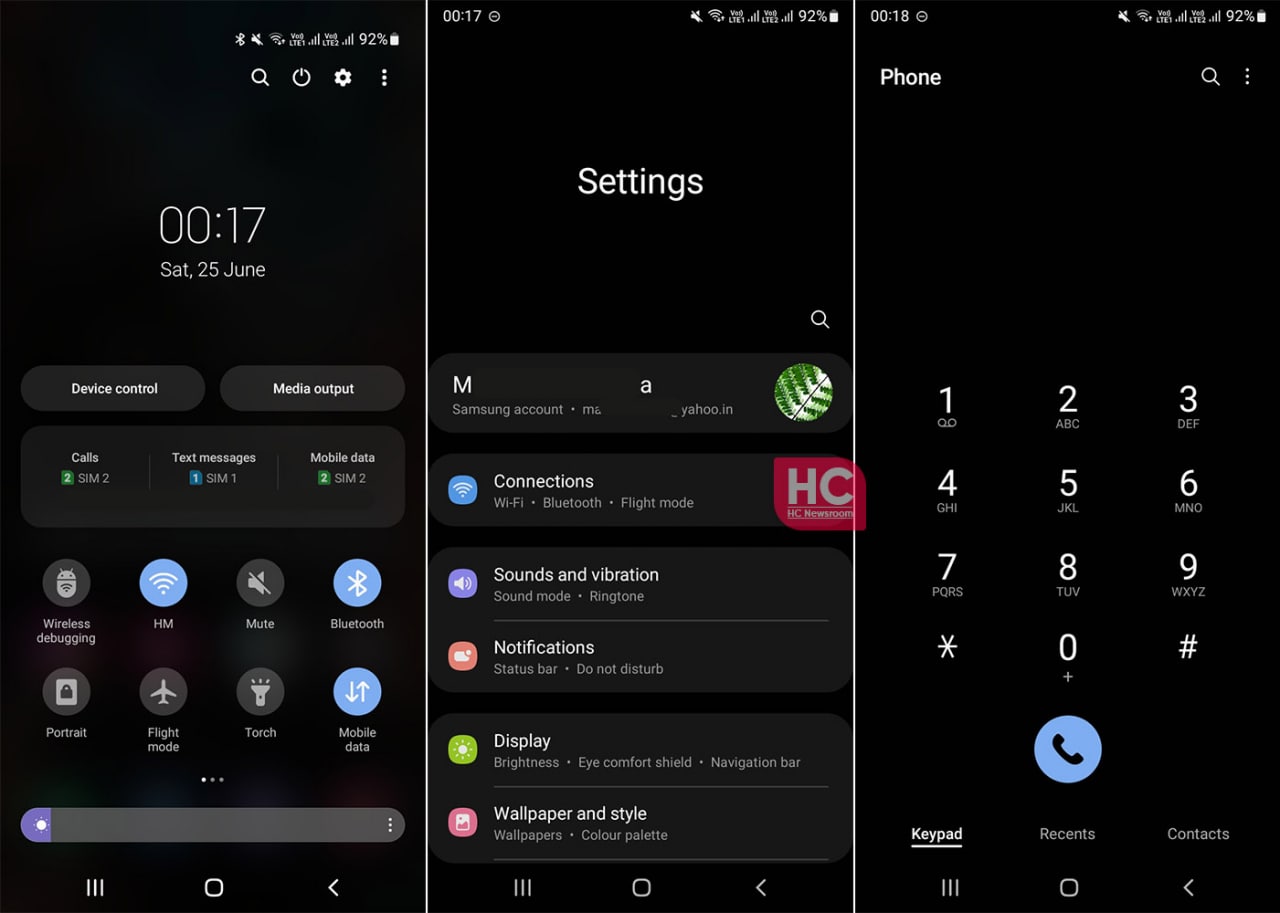 In iOS 15, Apple has kept the control center sleek, which looks the same once the dark mode is enabled or disabled. Yet, the translucent background changes along with the wallpapers once you apply the dark mode to the phone.

Moving on, iOS 15 has brought in the round shapes in the background of Settings menu options, which is a nice touch to look in dark mode and had a sharp appearance in the predecessor.

The color in the icons is also crafted with care as they remain the same in the light theme.

Despite its short search screen, I like the way, Apple has designed the round number pad on iOS, it is still, one of the best dialers that looks simple and elegant in dark mode. 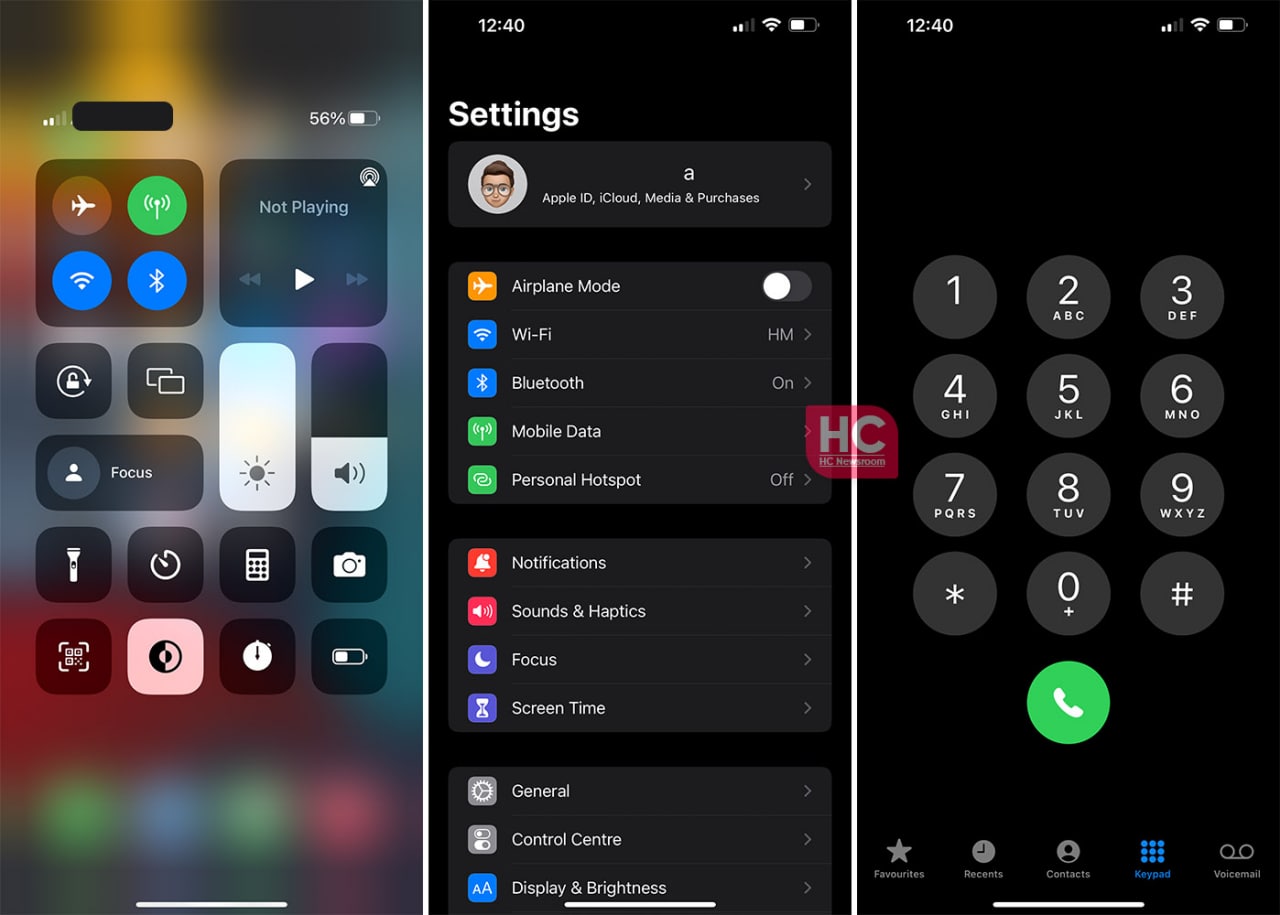 The dark mode feature on MIUI devices looks decent. Once you tap on dark mode, the phone tries to maintain the color composition and it seems like it is fighting to showcase the changes from the light theme.

The appearance of MIUI 13 dark mode is not supported by its font system, which is a kind of a bummer. As mentioned above, the software is keen to use the Google phone app on the global market, which is a good choice to go with for phone calls.

The overall look of MIUI 13 is decent but not good nor above. 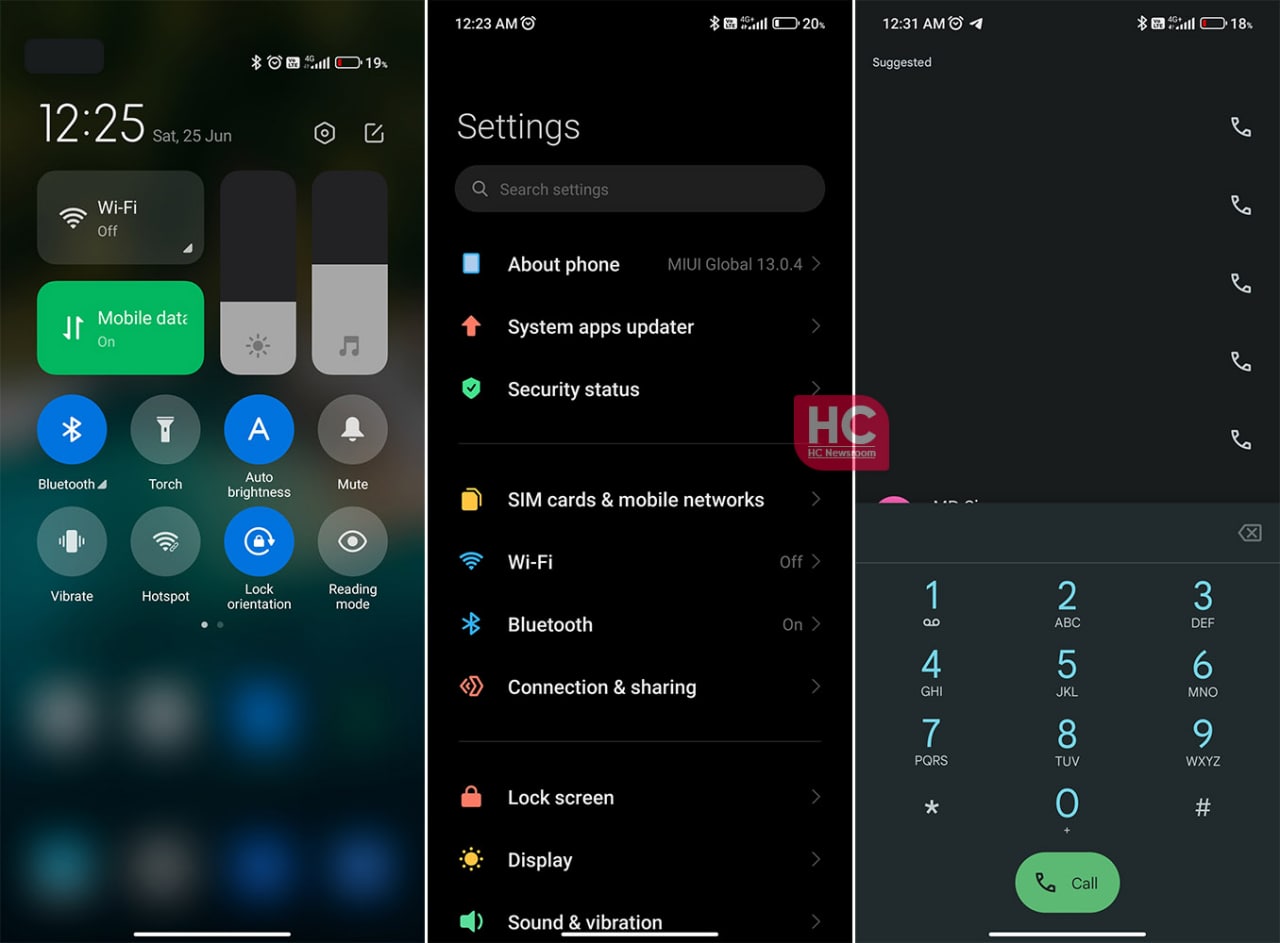 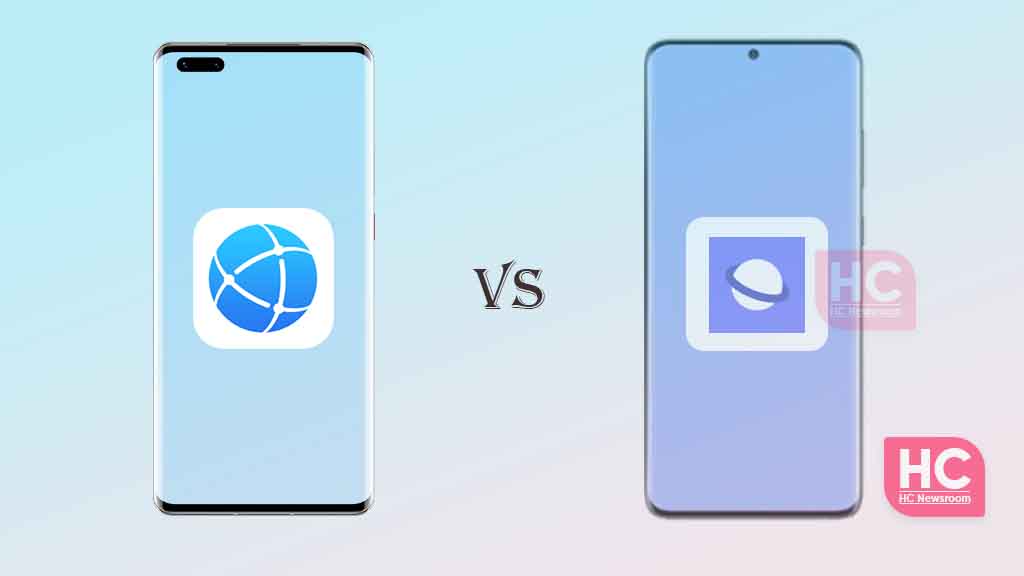 There is a rising inclination among the users toward secret A.K.A. private browsing top tech makers including Google, Samsung, and Huawei are also offering their built-in search engine applications for the users to better and more secure browsing.

Along with easy, secure, and informative content, both OEMs offer a confidential model to not store users’ data in history, cookies, and site data. Today we are trying to compare Huawei Browser and Samsung Internet to see which company offers better and safer browsing in Secret Mode for its users.

Before going ahead with the title, don’t forget to share which smartphones you are using and how’s your experience with them.

Samsung provides a fast, reliable, and simple web browser for smartphones and tablets. It also brings a secret browsing mode that allows users to browse privately without leaving a trace in their history and save from being tracked by others.

In particular, webpage bookmarks saved in secret mode only appear when the secret mode is enabled, and your browsing history, cookies, cache, and ID/password will be cleared as soon as you exit secret mode.

Here’s how to enable Secret Mode:

Huawei Browser has no sync feature for your Huawei account. This is not necessarily a criticism, as many prefer not to have this type of account functionality. Of course, all local features can still provide a complete browsing experience.

And when you don’t want your browsing history or other information to be seen by others, turning on private mode is a good idea. Huawei Browser protects your search process from being tracked to ensure your private experience

Both the Samsung and Huawei Browser have their uniquely featured search engines, notable both are more likely to be faster than Google Chrome. Their reclusive feature makes them more anonymous for users.

Huawei and Samsung browsing go a step further to make your experience even more secure with the ad-blocking and night mode features. Below you can check some highlighted features of Samsung and Huawei Browser apps.

Here are some highlighted features of the Huawei Browser: 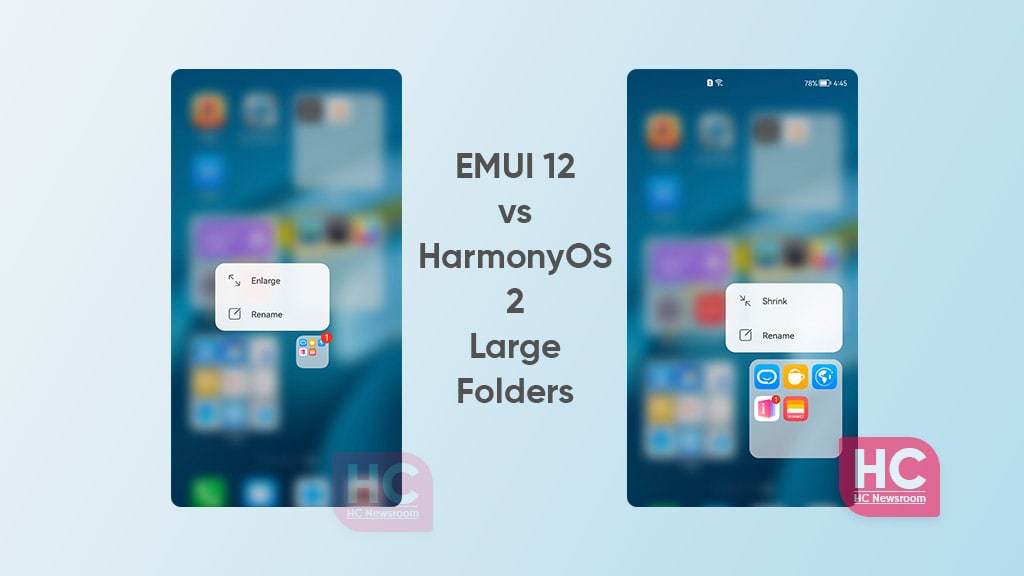 Huawei has started working on a new HarmonyOS 3.0 version under beta trials and we’re here to investigate what the current HarmonyOS and EMUI 12 have in difference. Talking about this matter, we’ll dig into a feature – Large Folders that is the part of both EMUI 12 and HarmonyOS 2.

Smartphones have different options to organize the home screen or simply put, customize it. You can change the wallpaper, theme, and more. Android 12 phones and later can even customize the color of the system user interface based on the color palette generated by the current wallpaper.

But what about apps, is there any way to clean up installed apps and make them functional? Well, EMUI 12 and HarmonyOS 2 run their own league and Large Folders is a feature that we could rely on for this task.

Large Folders allow you to group the phone’s on-screen apps and enable you to use them directly from the grouped apps folder. Meanwhile, all of that accessibility comes without opening the folder first, which makes it one of the best and most useful features to categorize apps on EMUI 12 and HarmonyOS 2.

There are no major or minor differences that have been found in both softwares for the Large Folders feature. However, you may find the HarmonyOS version a bit smoother as compared to EMUI 12. 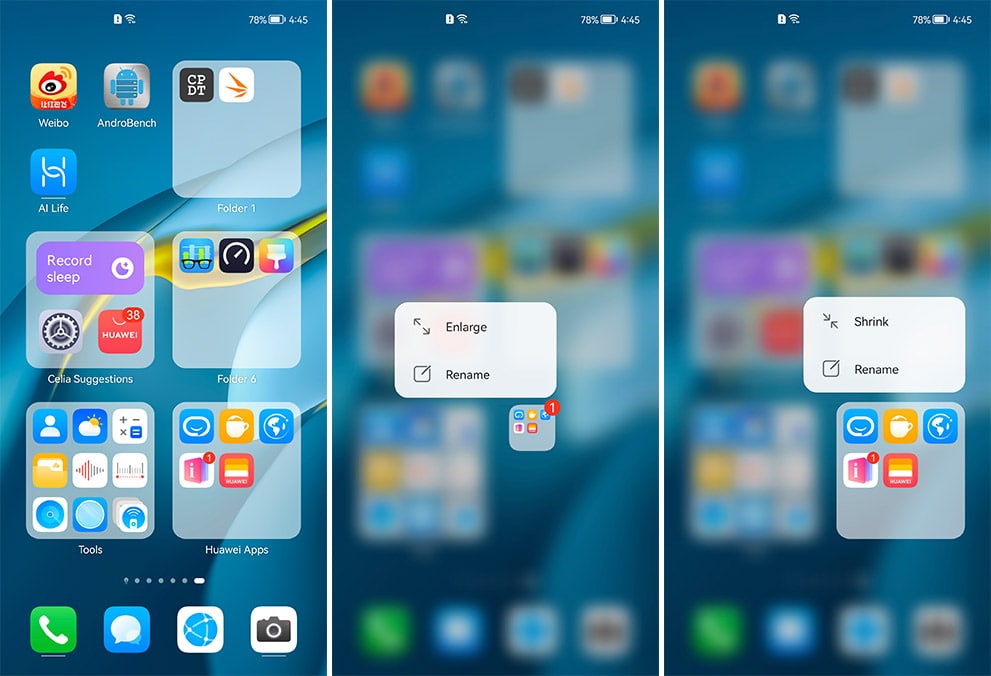 All you need to do is to tap and hold any on-screen app and drag and drop it on another on-screen app. But won’t this make a standard app folder? Don’t worry, the real action starts from here.

Touch and hold that standard folder to show a popup menu, from there select “Enlarge” to enlarge the folder. From here you use the apps without opening the folder first.

However, you also have the feature to shrink this large folder back to standard mode. To do that, you need to tap on and hold the large folder and select “Shrink”  to shrink the size of the folder.

So, what do you think about the Large folders feature difference in both of these Huawei softwares? Let us know via the poll linked below.\

What do you think about EMUI 12 Large Folders? #huawei