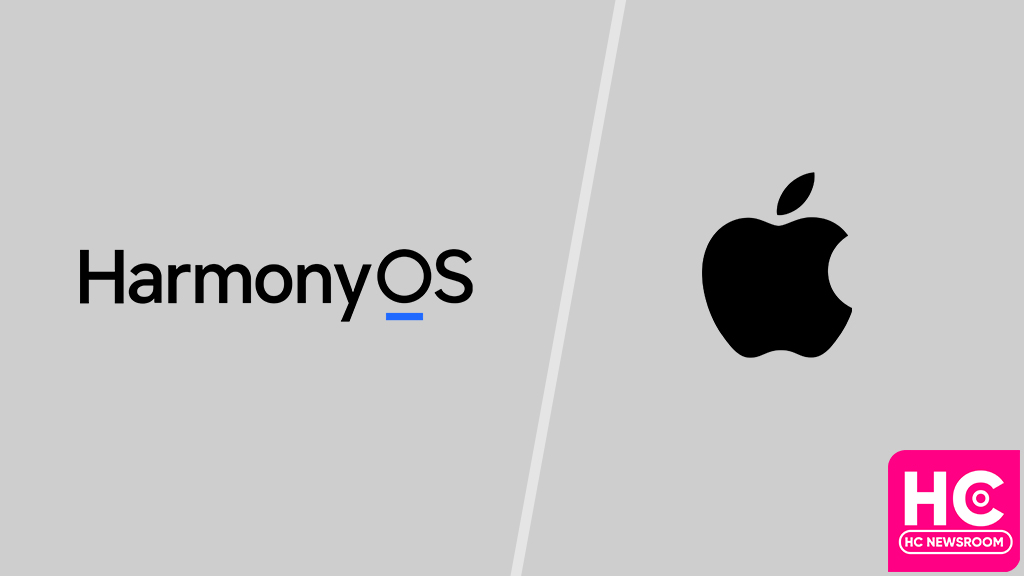 During HDC 2022, Huawei launched various HarmonyOS technologies and the company also shared how it could run different devices as compared to Apple.

Yu Chengdong, Huawei Consumer Bussiness Group CEO said Huawei uses one operating system for all of its devices. These include various devices such as:

In June 2021, Huawei unveiled HarmonyOS for smartphones and other consumer devices with the slogan “One as all, All as one”.  Afterward, Huawei started seeding it for smartphones using OTA software updates.

Apple began its journey on consumer devices solely with iOS, later on, the top tech maker distributed the operating system according to the platform.

Compared to Apple, Huawei has been focusing on major compatibility features for the HarmonyOS operating system from the very beginning. And in the past two years, Huawei made major progress in this matter.

HarmonyOS 2 was used on smartphones, tablets, smartwatches, smart TVs, smart devices, smart cars, IoT devices, and more. This OS could run up to 128KB of memory-supported devices, which Apple cannot do due to its closed-source policy.

Furthermore, HarmonyOS 3 has strengthened the core elements of its predecessor with a number of new features and optimizations to improve the user experience.

The growth of the OS was recorded by over 113 percent as compared to last year. The flip side shows that HarmonyOS Connect devices have grown by over 250 million and there’s a 212% on-year growth.

At the event, Huawei also released HarmonyOS 3.1 and confirmed that the HarmonyOS 4 will launch next year. There’s a lot more to come on HarmonyOS and we’ll keep you posted.

Advertisement
Related Topics:AppleHarmonyOSHuaweiYu Chengdong
Up Next

HarmonyOS 4 will be a new major upgrade 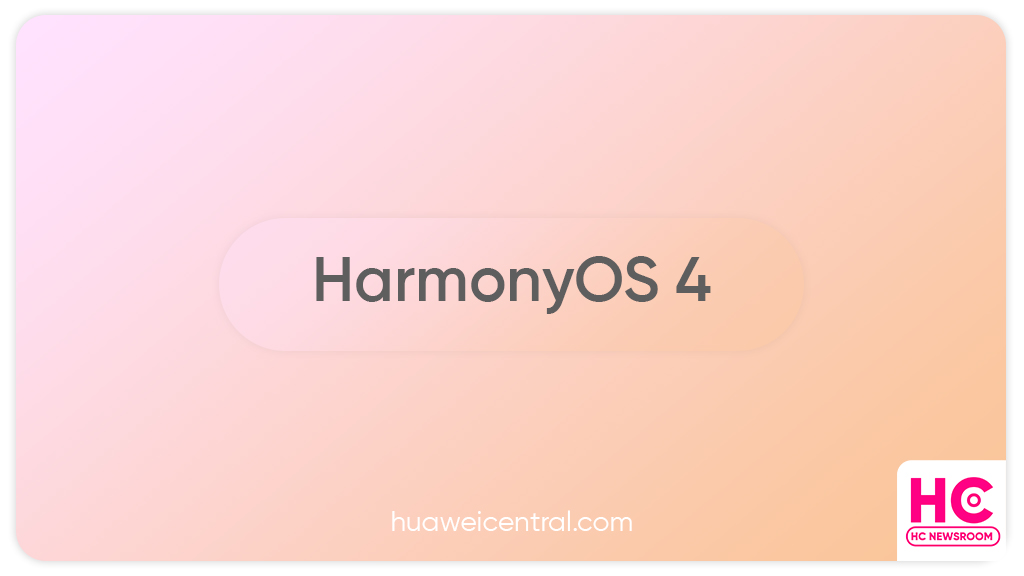 The anticipation is rising and HarmonyOS 4 could bring us some new user experience that we’re waiting for. Inputs coming from Weibo reveal that Huawei is working on HarmonyOS 4 and it could be the major launch version for Huawei devices.

According to the information, HarmonyOS 4 will come with major design changes and new features that will improve the user experience. Meanwhile, we’re also seeing inputs about HarmonyOS 3.1, which could debut along with the Huawei P60 series. Also, it could be taken as a major improvement version over HarmonyOS 3.0.

Therefore, HarmonyOS 4 deserves to be a major upgrade to complete the cycle. 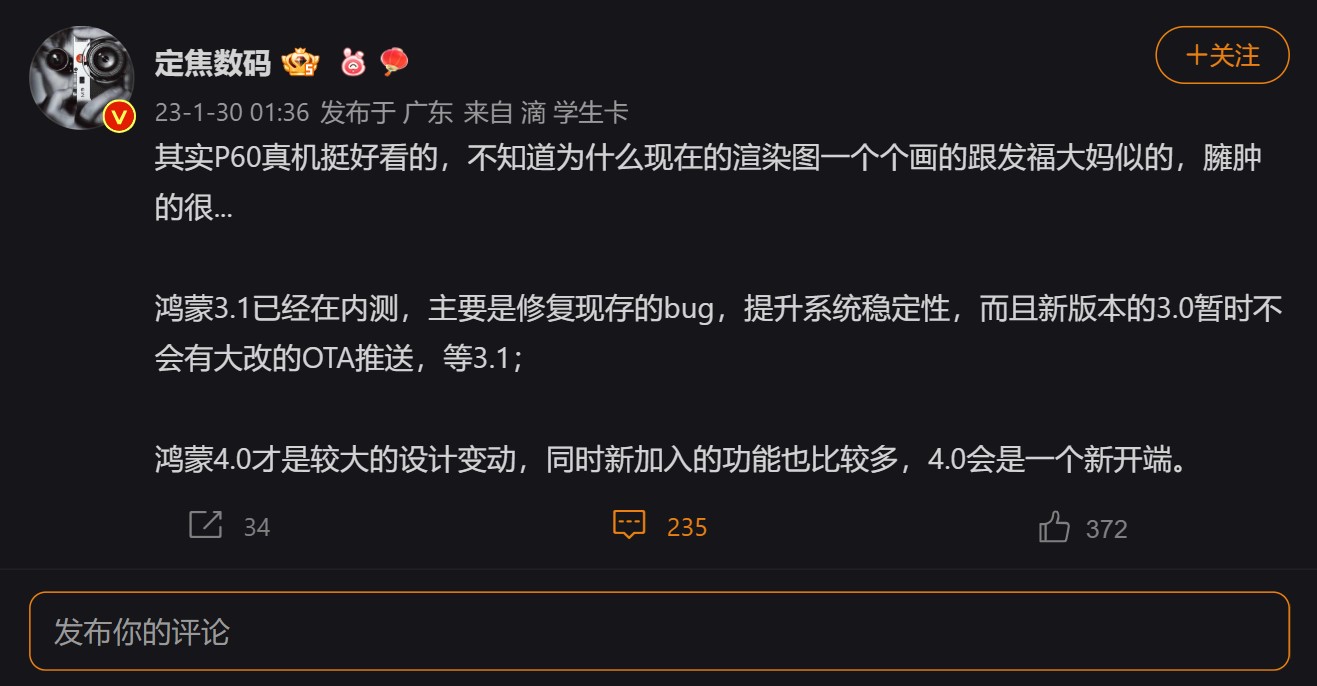 At Huawei Developer Conference 2021, Huawei launched HarmonyOS 3 and began testing the developer preview. On the other hand, the tech maker launched it in public in July 2022 for smartphones. At HDC 2022, Huawei didn’t launch HarmonyOS 4, yet it unveiled various services and HarmonyOS 3.1.

The stationed launch of a second HarmonyOS version suits the motive here, because, Huawei has decided to put two operating system versions among consumers.

One will be a substantial upgrade and the second one will be major. Therefore, HarmonyOS 3.1 could be seen in the Huawei P60 series and HarmonyOS 4 in Huawei Mate 60 series, which is slated to launch in the second half of this year.

As for now, Huawei has not revealed the official details about HarmonyOS 3.1 or HarmonyOS 4’s features and user interface.

Unveiled at HDC 2019, Huawei first introduced HarmonyOS in smart screens, and then the company opened it for various platforms. By harnessing the power of shared APIs and cross-device support, HarmonyOS could provide an all-around user experience.

For example, you can connect and control all of your smart home and IoT devices right from your smartphone. Various industry partners are using HarmonyOS to build new devices and helping to grow the HarmonyOS ecosystem. 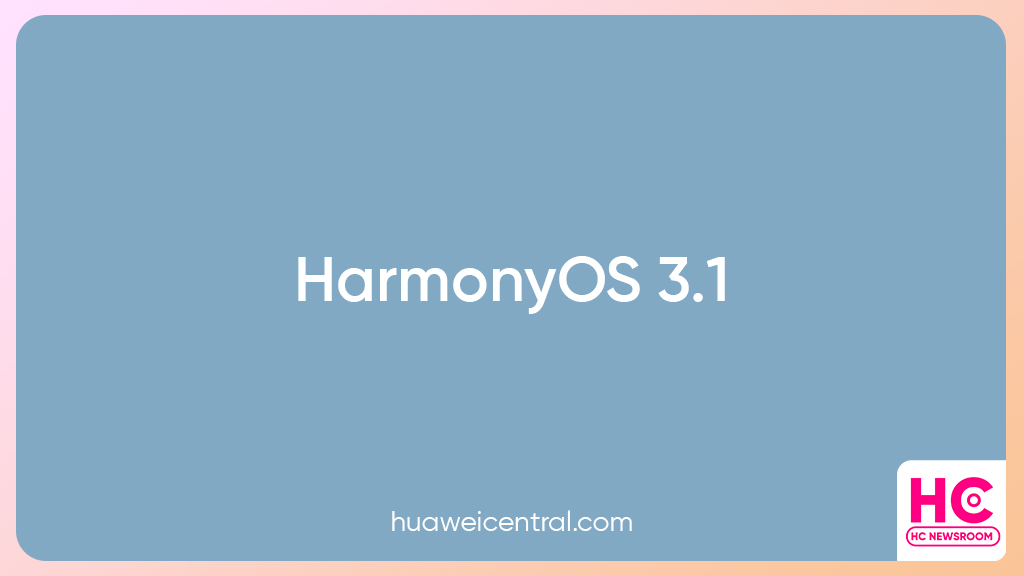 It is time to return to the dual launch flaghip launch in the same year, and Huawei will begin this carnival with the Huawei P60 series in the first quarter featuring HarmonyOS 3.1, reveals an internal code.

Despite having no confirmation, we could assume that this could be the upcoming Huawei P60 series. Also, we are not expecting big features upgrade with this software.

However, we could see this release as a bug fix and optimizations, while adding flagship-oriented additions to the Huawei P60 lineup.

Announced at Huawei Developer Conference 2022, HarmonyOS 3.1 comes as an early version of the HarmonyoS operating system. On the other hand, it is slated to launch in the first quarter of this year.

HarmonyOS 3.1 developer preview marks HarmonyOS design, it brings a light skeuomorphic aesthetic style and brings users a new interactive experience with the texture of real life. The cross-device super terminal can be connected with one drag, and the universal card can be swiped to obtain the required information, bringing a new experience of smart life in all scenarios.

It also gets you a new ArkTS development language developed by Huawei. Based on TypeScript (TS for short), it matches the ArkUI framework and expands correspondingly.

Aside from the developer preview, Huawei is yet to reveal the HarmonyOS 3.1 user interface on smartphones.

HarmonyOS is aiming 2 billion devices by 2023 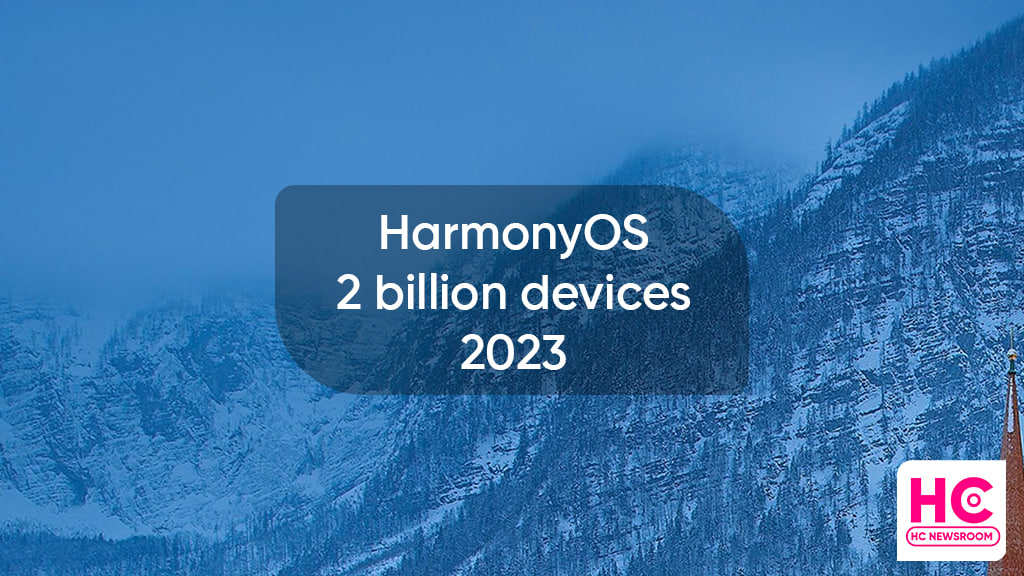 HarmonyOS is currently ruling as the China-exclusive (majorly) operating system and Huawei is looking to install HarmonyOS in 2 billion devices by 2023.

Yes, the aim is quite big but if we look into the progress that this software has made over the past three years, the company has already achieved many milestones that we can’t ignore.

Let’s dive into the past installations, Huawei achieved over 200 million installations by the end of 2021 but it was only for Huawei devices. Meanwhile, HarmonyOS Connect, an operating system for third-party company products, launched 100+ million fresh devices with HarmonyOS pre-installed.

Moving to 2022, Huawei posted a heavy 320 million HarmonyOS installation mark in its own devices, and then HarmonyOS Connect launched with 250+ million third-party products.

Stepping further, OpenHarmony, an open-source version of HarmonyOS has also come so far to show its worth in the tech industry and made rapid growth in the last two years after its submission to OpenAtom open-source foundation.

The combined weight of HarmonyOS for Huawei devices and HarmonyOS Connect stands above
570 million devices, which is the biggest single-year growth made by any operating system. However, the actual number may have been around 700 million.

This year, Huawei may expand HarmonyOS in the global market and launch new products. On the other hand, HarmonyOS Connect could surpass the biggest figure, which seems more exciting.

According to inputs, OpenHarmony could post new records, as it’s used by various major Chinese tech players to use for different purposes. With all of these combined, HarmonyOS could successfully aim at 2 billion devices by the end of 2023.

Launched in 2019, HarmonyOS is a multi-kernel operating system, designed and developed by Huawei and later donated to the OpenAtom foundation.

In 2020, Huawei announced HarmonyOS for smartphones and expand it widely next year. HarmonyOS is known for its easy-to-use user interface and multi-device connection features.

It’s known as an IoT operating system, which could run across the lowest possible specifications such as 128kb of RAM. That’s how it is being used in all sorts of products in the Chinese market and it’s expected to grow further this year.