A patent is an exclusive right granted for an invention that can be a new way of doing something or offers a new technical solution to a problem and more. Every company patent for its new innovation. Nowadays the number of patents in the US market becomes a major way for brands to display their technologies.

Recently, the data coming from USPTO Patent and Trademark office reveals the ranking of companies on the basis of the patent filed in the US in 2020. The first position is secured by IBM with 9435 patents, followed by Samsung and LG with 8539 and 5112 patents respectively.

Huawei ranked seventh with 3178 patents and accounted for a year-on-year (YoY) increase of 9%. Everyone is now aware of difficulties faced by Huawei in 2020 due to US sanctions. Despite the difficulties, the company has not stopped innovation and technological progress as well as continues to apply for the patent in the US.

After Huawei, Microsoft, TSMC, Sony, Apple, and more placed on the list. Among them, TSMC is spotted in the list with the highest increase rate of 22%. However, Apple and Dell’s growth rate is also notable. 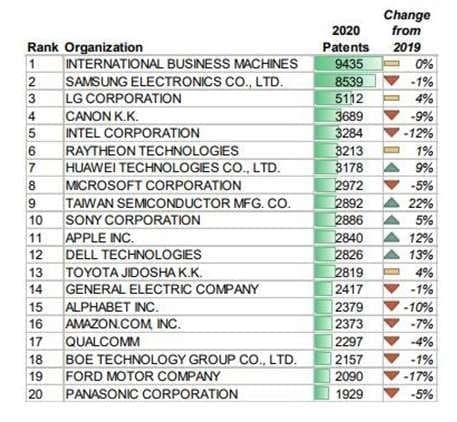