Huawei today has clarified its issue on allegations of latest intellectual property theft mentioned on a WSJ report, calling these claims as false accusations.

Huawei under investigation by US prosecutors for new allegation: Report

On August 30, WSJ reported the US Department of Justice launched a new investigation against Huawei for the allegation of stealing design patent of the Oliveira camera.

On September 3, Huawei responded by rejecting Oliveira’s claims of patent infringement and has provided the detailed documentation in support of its stand on the matter.

Huawei said the company first contacted on the request of Mr. Rui Pedro Oliveira in 2014 to sell his camera design to Huawei but the company did not use it. In 2017, Huawei started selling EnVizion 360 camera, designed indigently and have no connection to Oliveira’s design.

From 2018 to early 2019, Mr. Oliveira begins threatening to Huawei that if the company did not pay an extortionate amount of money, he would go to the media and exert pressure through political channels.

“Mr. Oliveira proceeded to feed a false narrative to the media in an attempt to tarnish Huawei’s reputation. He made further efforts to exert pressure on Huawei through senior government officials, trying to make the company cede to his demands and hand over large sums of money,” said Huawei.

Huawei has also condemned the efforts of the U.S. government to discredit Huawei and curb its leadership position in the industry.

Below you can see, comparison of Oliveira’s design patent and Huawei’s EnVizion 360 camera. Unlike Mr. Oliveira’s single-lens and expandable design, Huawei’s camera was non-expandable, featured lenses on both sides designed for panoramic pictures. 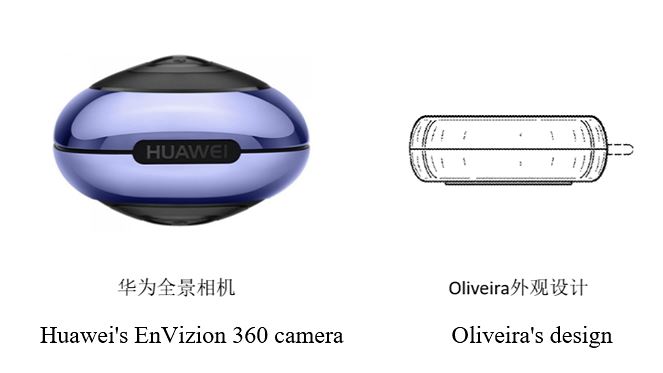 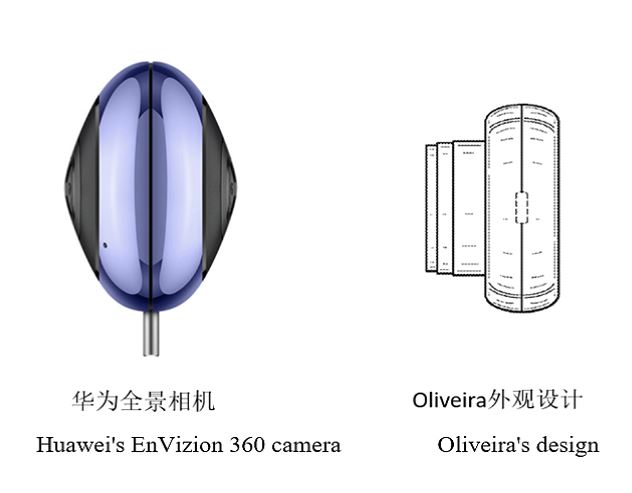