Third-quarter results of this year are coming out, and Counterpoint research shows the growing smartphone demand in Q3 2019 helped the global smartphone market to halt the seven-month streak of year-on-year (YoY) declines.

According to the data compiled by the researcher, Huawei has increased its smartphone business in the third quarter and sold 66.8 million smartphone units, with 17.6% shares and 28.5% YoY growth globally. During the same timeline last year, Huawei sold 52.0 million units with a 13.7% market share.

To be noted the figures shown in the report includes the smartphone sales count of both Huawei and its subsidiary Honor.

Other than Huawei, Samsung stays on top with 78.4 million smartphone shipments, 20.6% market share and 8.4% annual growth. Apple comes third with 44.8 million units, 11.8% shares and an annual decline of 4%.

Moreover, Chinese smartphone companies including – Xiaomi, Oppo, and others are also facing a decline in annual growth.

In a domestic report from Canalys for Q3 2019, Huawei has captured 40% of the Chinese smartphone market and is the only smartphone maker to see business growth.

“The US trade ban on Huawei did not affect the overall brand’s shipments and growth in Q3 2019 after the uncertainties in June. Huawei’s strategy to supplement its decline in overseas market share with domestic push paid off handsomely” said Tarun Pathak, Associate Director at Counterpoint Research. 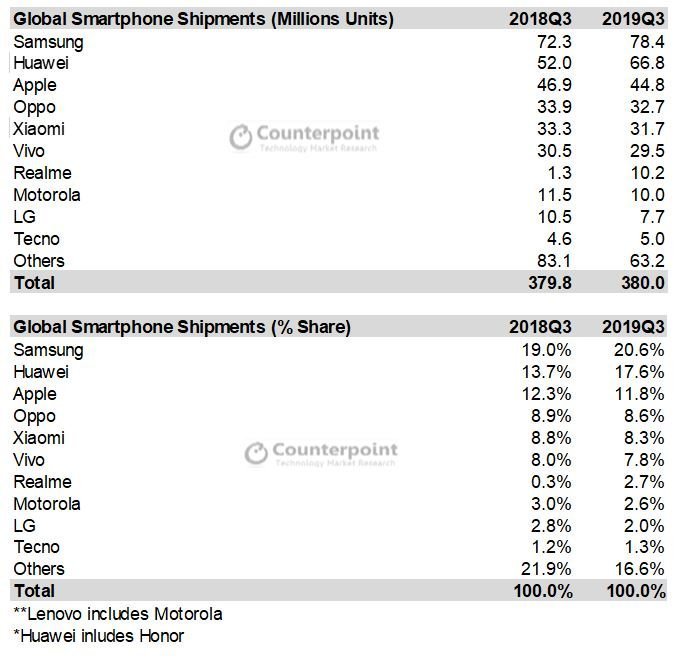