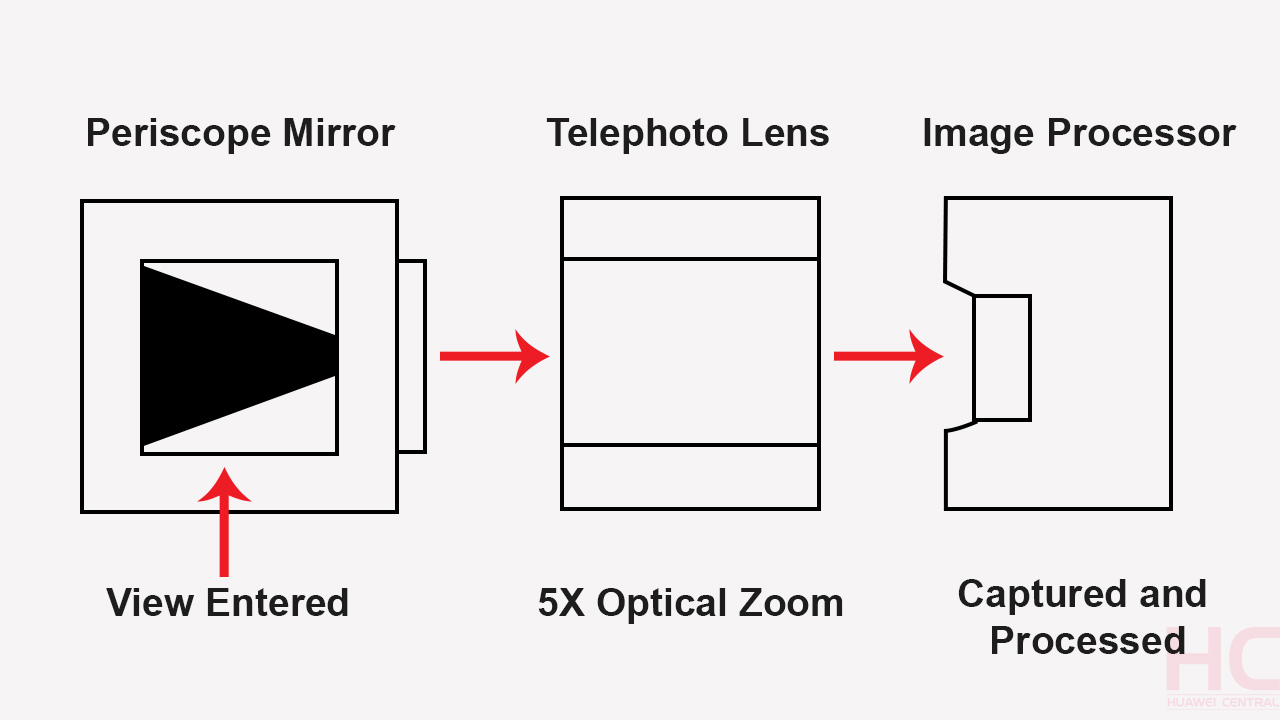 
Although, Huawei P30 Pro comes with many new feature and unmatched performance but one of its significant achievements lies in its ‘Rear Camera’ hardware, which has four camera lenses and the most remarkable in these four cameras is its new “Periscope Camera” that allows users to obtain praiseworthy 5X optical and 50X digital zoom.

As recently this new camera hardware got revealed from the inside, Thanks to JerryRigEverything and his teardown of the P30 Pro we got to look what this camera really is.

Firstly the name of this camera system is undoubtedly derived from its periscopic mirrors used inside the hardware, and unlike main Camera module, this view enters in the module first goes through the periscopic mirrors then proceeds towards the telephoto camera.

The Periscope camera is placed in a single module compared to the other three cameras joint together. While the module itself is divided into three following sections:

1. Periscopic Mirror: Placed first is similar to an actual periscope, three mirrors are pointed towards each other and reflecting the main view to the Telephoto lens.

2. Telephoto Lens: Is placed In the middle and catches the view from Periscope mirror to zooms in and to bring the object closer to the Telephoto camera.

3. Telephoto Image Processor: Placed at the end of the module, the camera lens is facing towards the Telescope lens and then captures the image to do all of the image processing and sends it to the phone.

Altogether: The combination of all of these components together creates a massive 5X optical and 50X digital zoom without losing the quality of the image.

Lengthwise this new camera module takes up to 30 to 40% space inside the P30 Pro. Moreover, it can be said that with the right combination of hardware or the mirror placement we can get 10 to 15X optical zoom and you can image how much far it can go with digital zoom.

We must have to say that it’s a great use of technology and Huawei deserves to be called the world’s first to introduce this in its flagship phone.

Moreover, all of us really like to see what Huawei can achieve in the near future but it can be seen like the current 50X digital zoom is also more than just satisfying.