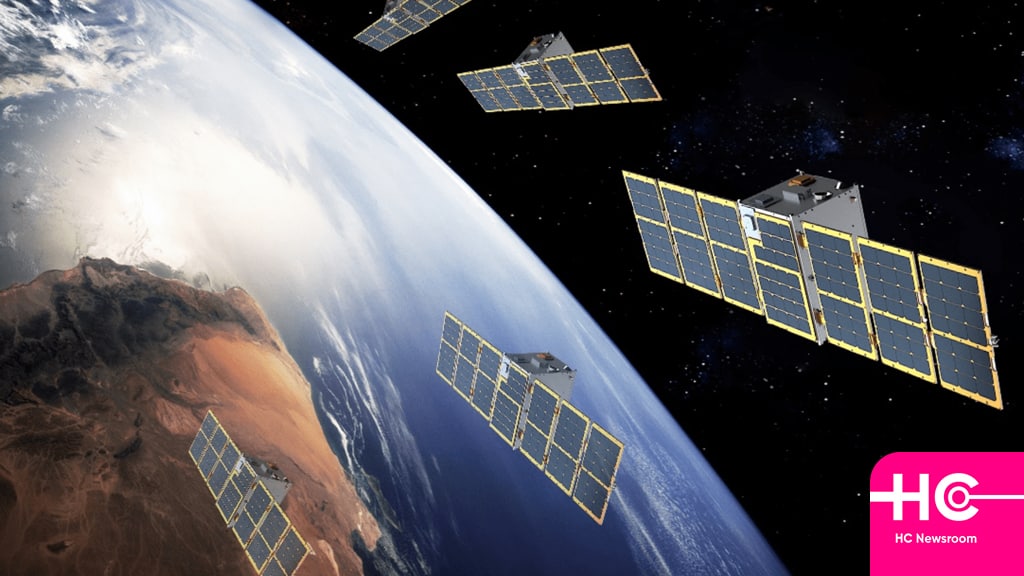 On May 13, Huawei published a new patent entitled “Satellite finding method and device” in China. According to the State Intellectual Property Office, on October 26, 2020, Huawei applied for this patent technology to find satellites, which is now authorized with announcement number CN114494408A.

The patent application shows the method and device for finding a satellite. This Huawei patent technology can be used in the satellite communication system, which will be suitable for a smartphone device and allows them to find satellites.

However, the technology doesn’t require a high-end smartphone even a low-budget, small in size, and less power-consuming phone can also be used. To know the working of this patent technology, read the article below. 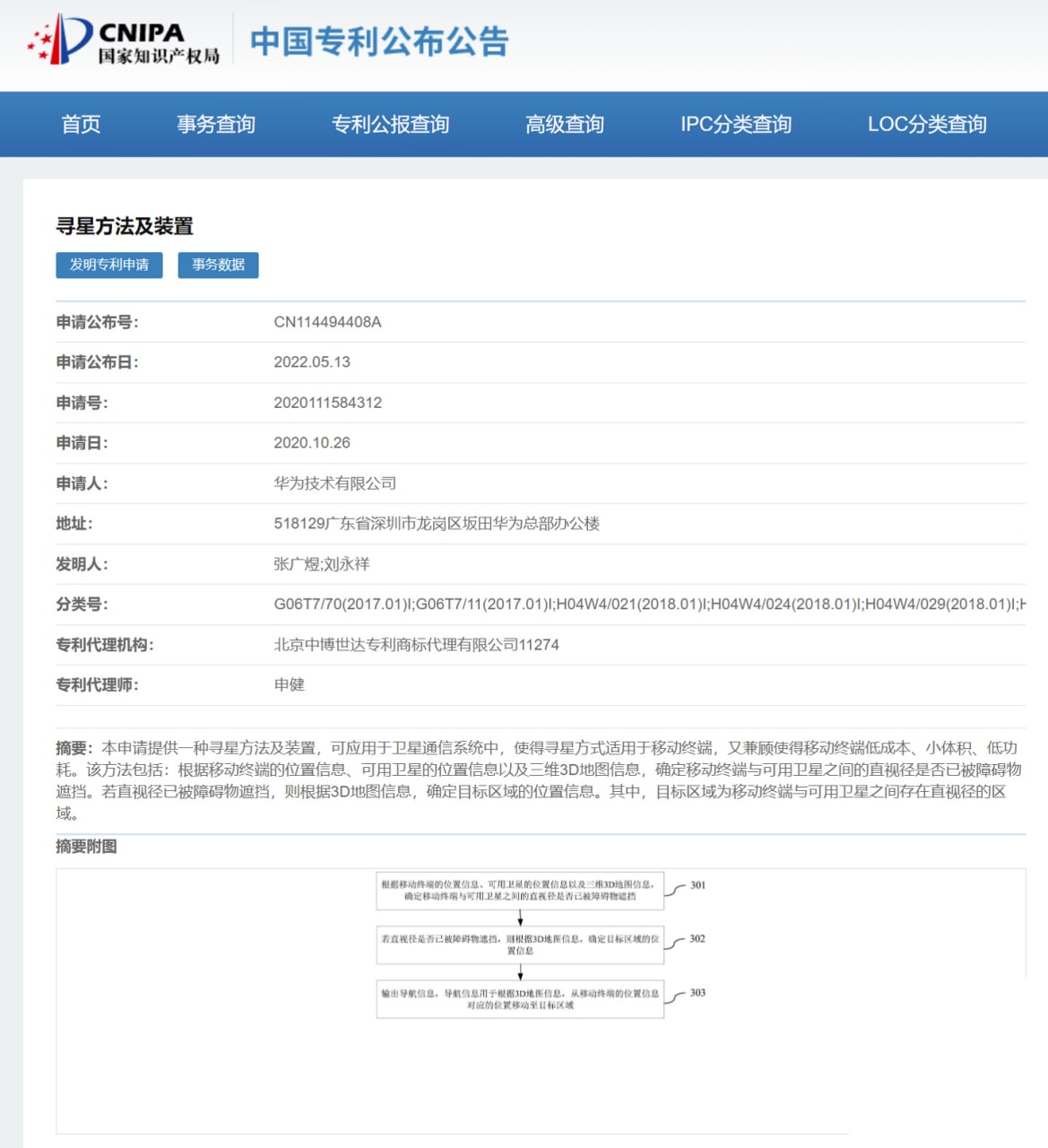 If the direct line of sight is blocked by obstacles, the location information of the target area is determined according to the 3D map information. The target area is an area in which there is a straight line between the smartphone and the available satellites.

Back in April, Huawei patented technology for satellite ephemeris data transmission. However, this patent was applied on April 6, 2021, and then announced with the number CN114374421A in China. It was aimed to solve the problem of long time-consuming transmission of ephemeris data. Read more

Advertisement
Related Topics:HuaweiPatentSatellitetechnology
Up Next 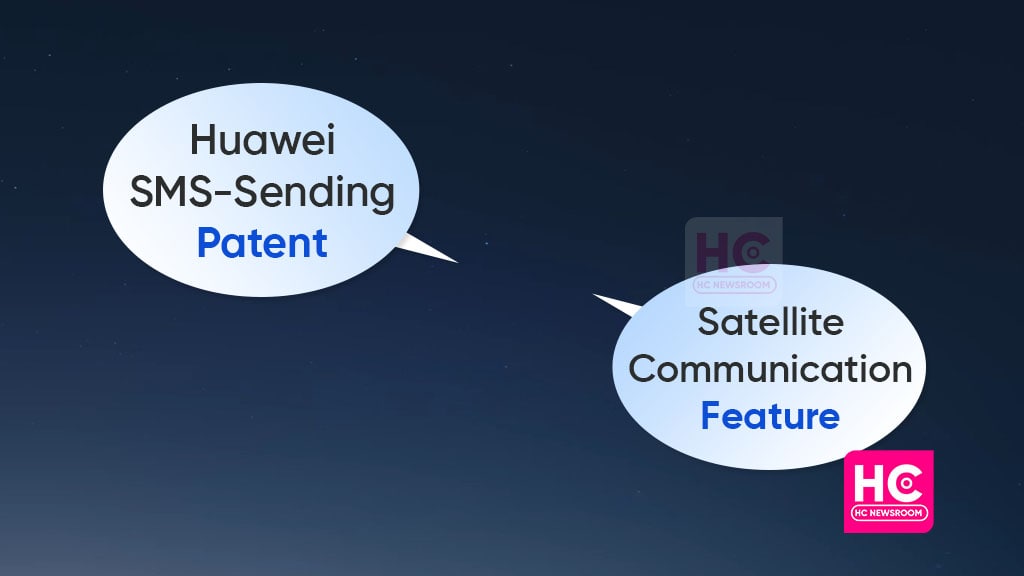 Huawei and its journey toward new patents will never get a stoppage. The company has recently issued a new and unique Huawei SMS sending patent, based on satellite communication. As usual, this segment has also packed some interesting tugs in its bag.

As per the reports, the latest Huawei patent carries the title “SMS sending method, related devices, equipment, and readable storage medium”. Alternatively, this gives the idea that the company could plan to work on new SMS features and their support for various smart gadgets.

On diving into the depths, we found that the patent suggests a useful method for sending short messages and readable storage media to relevant devices. Ultimately, this will help the users in the low network areas to obtain a universal short message service.

How the Unified SMS Sending will work?

Thereafter, the short message center will inspect whether the second terminal is in the satellite communication network or not. As soon as the center will identify the network location, it will prompt the information to the first terminal.

Once again, the first terminal will send the short message to the second terminal, so that now it can receive and react to the information. In this manner, it will help the users to connect with their noteworthy contacts at any time.

Up to this point, Huawei has attained a bunch of patents regarding satellite communication. And let’s not forget about the dynamic Mate 50 series that reflects the efficient Beidou feature in its core system.

In recent times, the company also brought communication methods and device applications related to the same satellite-oriented executions. On the flip side, the Mate Xs 2 is also in news to flourish the same function in the future. Yet, time will give us better answers over these speculations and patents. 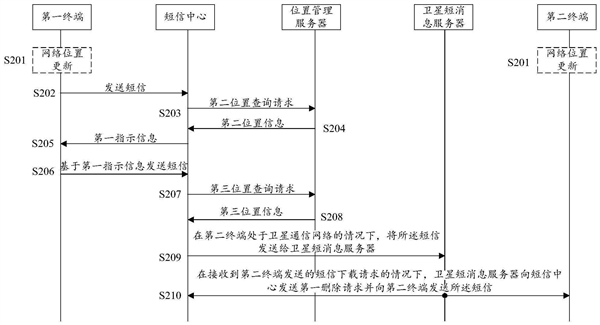 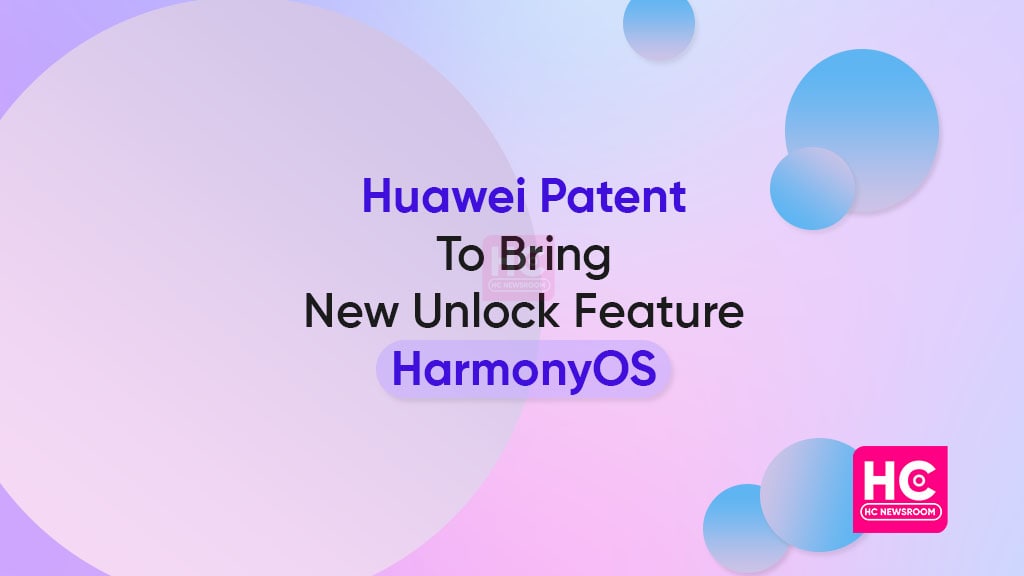 Huawei is again surfacing in the news headline. But this time, the matter isn’t revolving around the devices. The company has issued a new patent that reveals an advanced unlock feature for the Huawei HarmonyOS operating system.

According to the information, the newly released patent reads the title as electronic device unlocking method and related equipment. Eventually, we get the clue that Huawei is preparing a new unlock feature and could bring it to the HarmonyOS interface.

In recent times, there are several scenarios where the users demand such features that can interconnect the devices with each other. Besides, the usage of hardware mutual assistance and file sharing between devices are quite common nowadays.

However, while performing the multi-screen collaboration between two devices, the user has to pass through an unlocking stage. Currently, this unlock feature is quite ineffective and problematic for users to utilize.

Hence, with a mindset of a more accurate and efficient unlock feature for HarmonyOS, Huawei came up with this patent. Consequently, this application will enable the unlock operation of the first device on the second. Thus, it will ensure better safety and convenience. 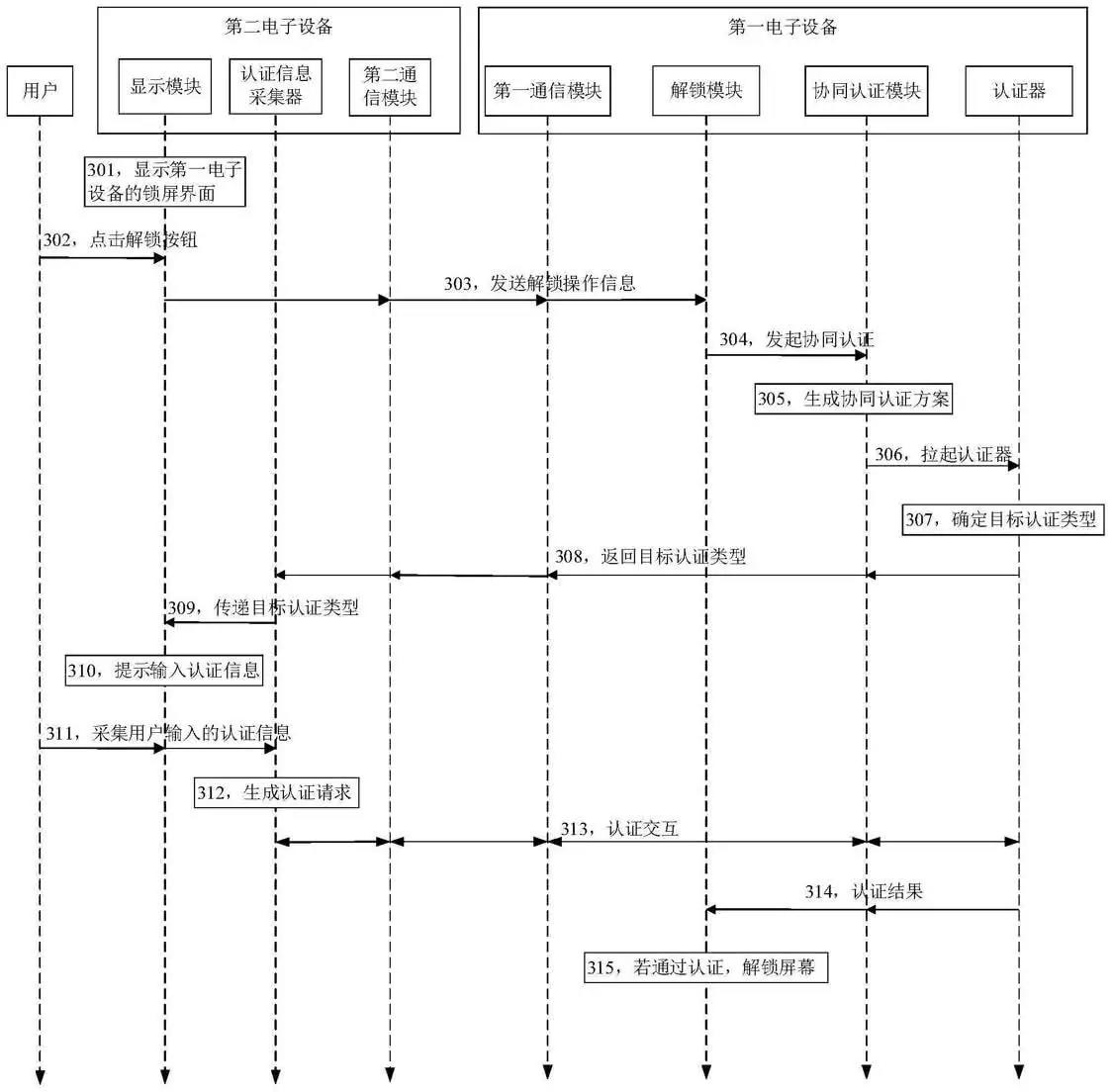 How the new unlock feature will work?

Speaking of the patent application, the information shows a sequence of procedures that will execute this operation.

Huawei has just made an idea for a responsive unlock feature. Yet, how much time the company will take to implement this feature in its self-developed system is still a question. 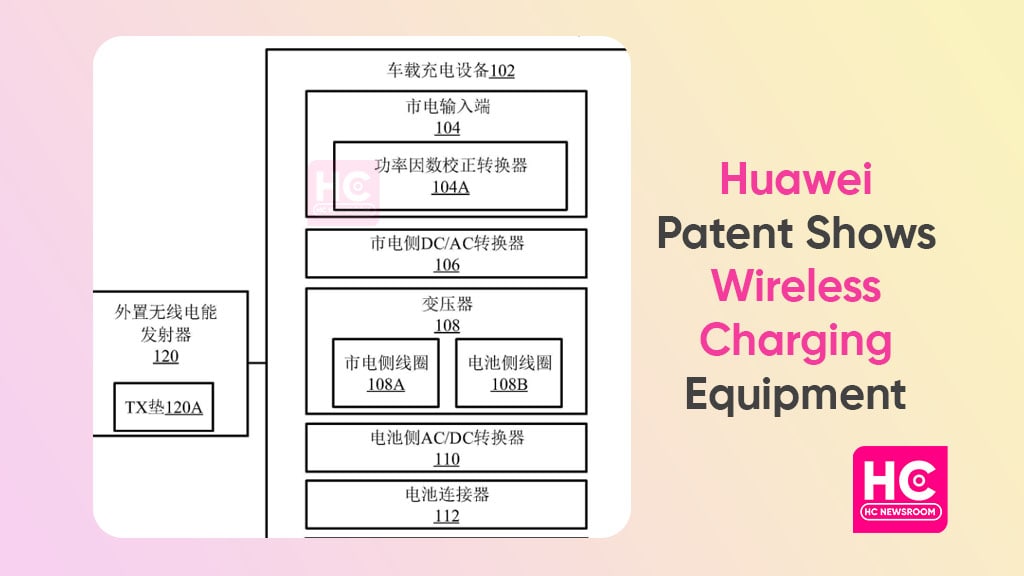 Huawei and its innovations are famous in the world of technology. The company believes that new techs bring new benefits. And to continue this technical journey, Huawei has obtained a new patent for wireless charging equipment.

Huawei knows that electric vehicles are the new face of the automobile sector. However, often this high-tech automation fails in power efficiency. Hence, to provide a new boost to smart cars, Huawei is planning to introduce an evolved wireless charging equipment.

In the current scenarios, the electric vehicle charging mechanism comprises three operations: onboard charging (OBC), off-board charging, and wireless charging (WC). But this technique is quite low-integrated and often takes a huge amount to get equipped in the car system.

Consequently, the new patent has a unified solution to this matter. As per the info, the company will reveal an onboard charging gadget. This gadget will ultimately showcase high power at a noteworthy low cost. 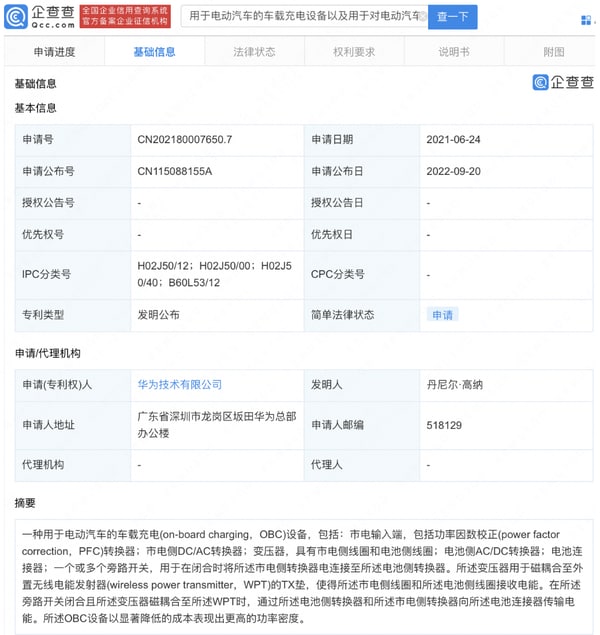 How the device will furnish high power?

Firstly, the company will impose the below-mentioned components on the charging technology so that it could work appropriately.

In these elements, the transformer will work on magnetic coupling with the external wireless power transmitter (WPT) and its TX pad. As a result, the mains side coil and the battery side coil will receive power.

Thereafter, when the bypass switch will remain closed and the transformer will associate with the WPT magnetically, the power will begin to deliver to the battery connector via the battery side converter and the utility side converter.

In this manner, the new wireless charging equipment will constantly deliver energy to the electric vehicle, making it more efficient. 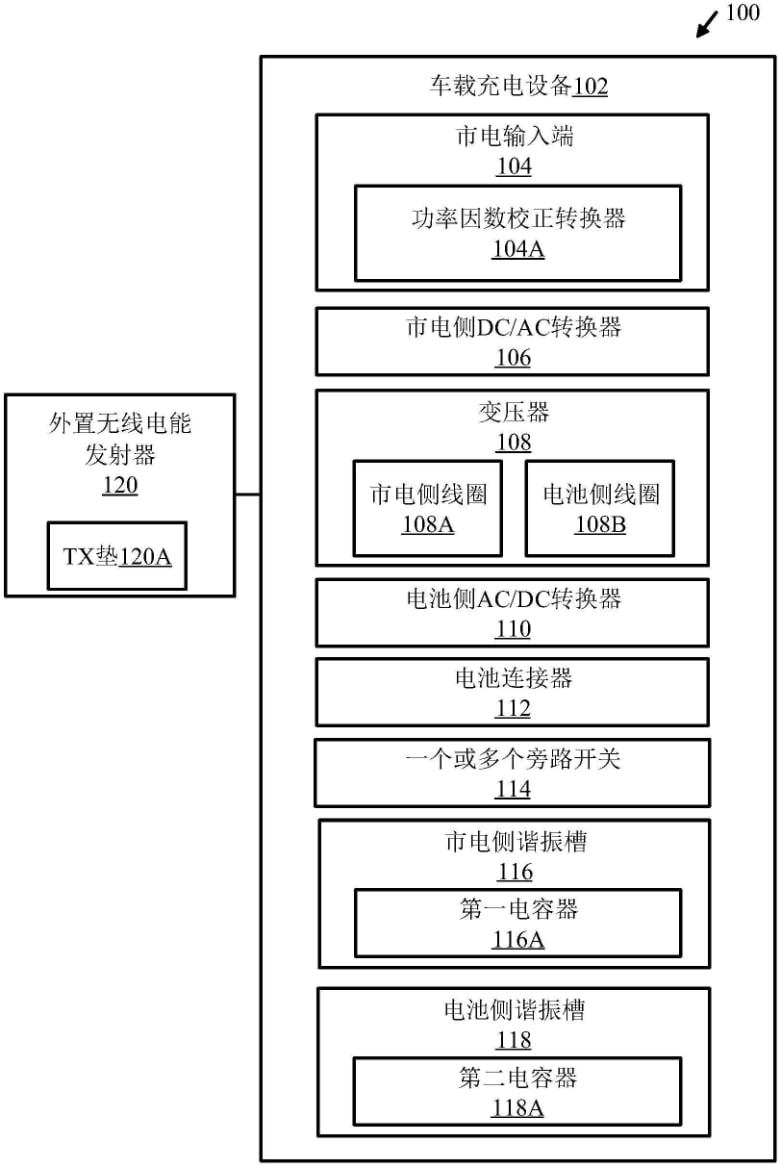