Alongside the P50 series, leaks, rumors, and news of Huawei Mate X2 are continuously appearing online. As the company preparing to launch its next generation of foldable phones, new information suggests that this phone could launch this month.

Recently, a Weibo tipster – Digital King discloses that Huawei’s new generation folding smartphone will arrive at the end of February 2021. Also, it comes with an inward folding screen design, which is different from Samsung’s design and 5nm processor as well as new technologies.

In terms of camera, it offers a 50MP+16MP+12MP+8MP rear camera and 16MP selfie camera. It equipped with a 4400 mAh battery that supports 66W super flash charging. Also, it has received a WiFi 6 certificate and network access certification.

Meanwhile, Huawei is yet to confirm the launch date officially but we’ll keep you posted on this matter. 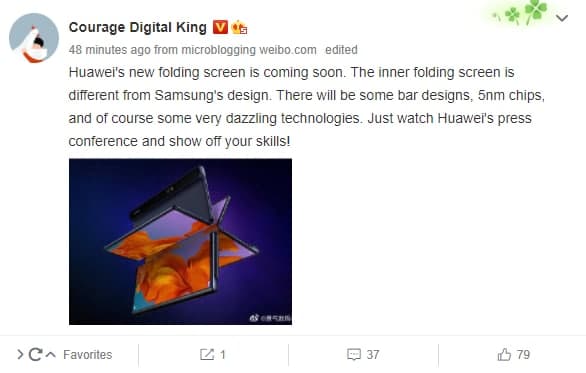