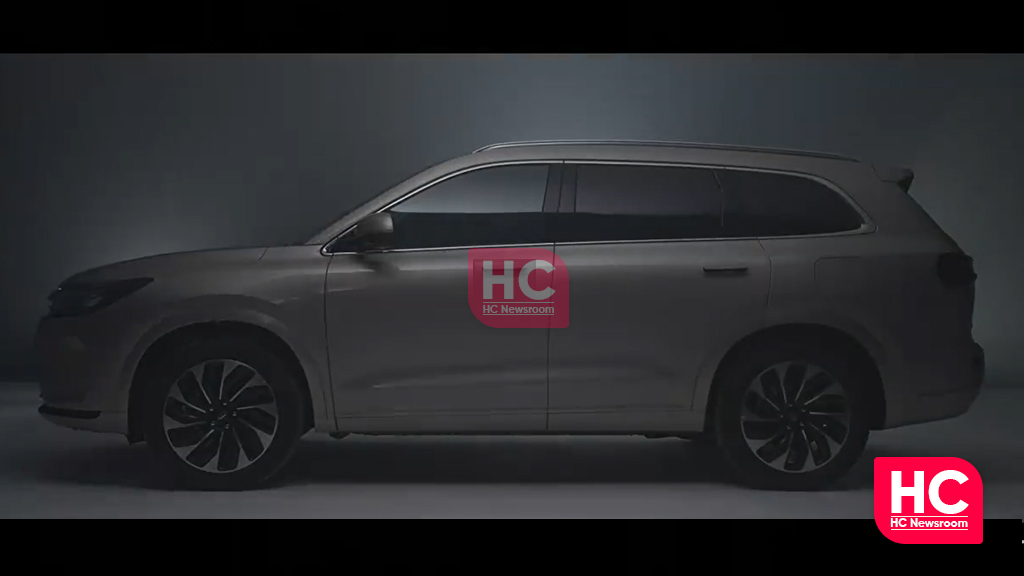 So finally the day has arrived to meet various exclusive new products of Huawei at the ‘Summer new product conference set today‘. As per the info, the company is all set to unveil the AITO M7 SUV pure electric car along with the Nova 10 series.

The most comfortable and intelligent Huawei AITO M7 SUV luxury car is unveiled today to bump the AUTO market with its most style design that surpasses a million-dollar luxury car.

“The second model of the AITO brand, Wenjie M7 will redefine the six-seat space and bring more than one million The comfortable and intelligent experience of a luxury car,” Said Huawei, CEO of Terminal BG, and CEO of Smart Car Solutions BU” 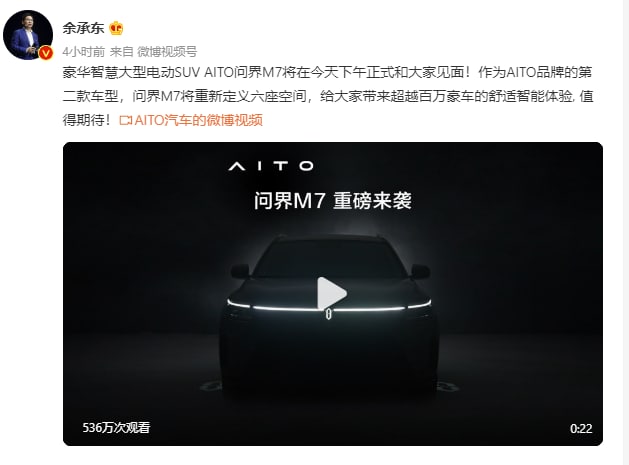 After this clear announcement from the company with the warm-up video to showcase the feature and innovative design of the new SUV M7 car it easily finally the car continues to follow the design of its predecessor SUV M5.

Only the change counted at the front features an illuminated brand logo, a penetrating LED light strip and packed with a hidden door handle. It shows a 6-seater layout with measures 5050 x 1945 x 1775mm and has a wheelbase of 2820mm.

Moreover, this latest car will available in two exclusive models which include:

So guys are excited for the latest new Aito M7 SUV car scheduled to launch today, just stay tuned with us for more and the fastest details. 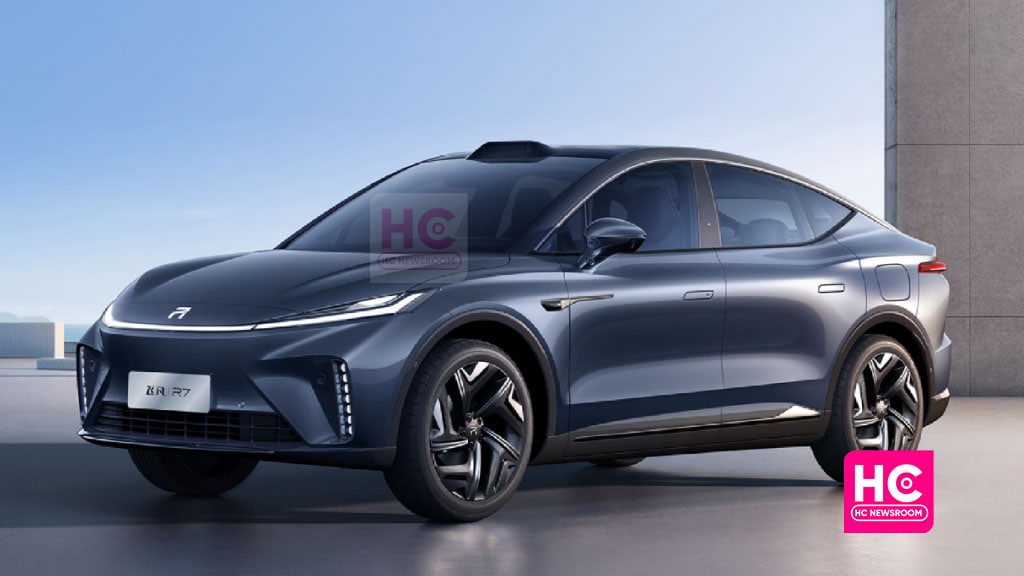 The wait for a new and super-agile smart car is over! SAIC Automobile cooperation has finally launched the world’s first Huawei AR-HUD-equipped Feifan R7 pure electric vehicle. Besides, there are some more new tweaks, hidden in the backseat of this car.

So let’s make a good tour of the new functions and pinches of this smart automation!

SAIC Group has launched a total of four Feifan R7 models with the Huawei AR-HUD system. This is a medium-to-large-sized SUV with a measurement of 4900mm in length, 1925mm in width, and 1655mm in height. It also has a wheelbase of 2950mm.

In terms of charging power, the company has implied a 77kWh and a 90kWh battery in its car models. These offer a cruising range of 642km. It also equips the Snapdragon 8155 processor with Premium 4D imaging radar.

And let’s not forget about the Huawei AR-HUD system which is the largest field of view. It supports immersive visual interaction and helps the driver to stay in connection with both surroundings and the automation. 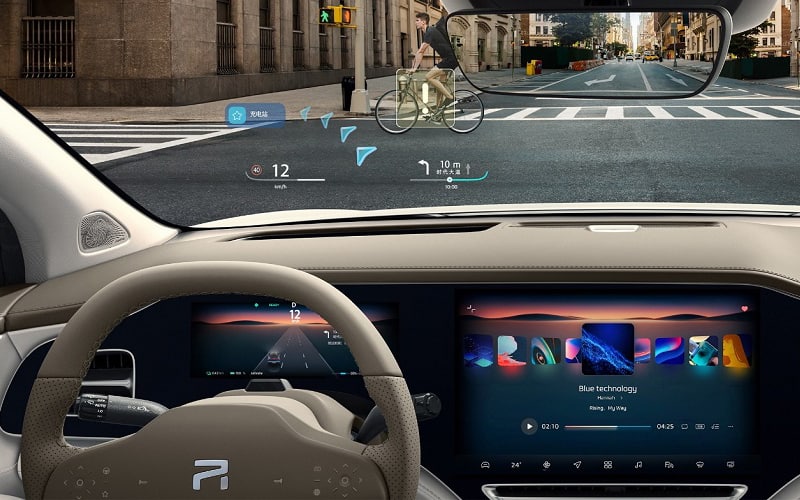 Speaking of the design, the Feifan R7 features a streamlined fastback structure with a sports car-level wide-body layout. It also showcases a multi-dimensional sensor-oriented smart cabin. Further, there is a 43-inch wide-format true color triple AMOLED-based screen with a central control panel.

It also carries supercomputing driving chips and a full-stack high-end driving system. Ultimately, these features are quite enough to boost the driving experience of the user from zero to a hundred level.

Price of the new smart car 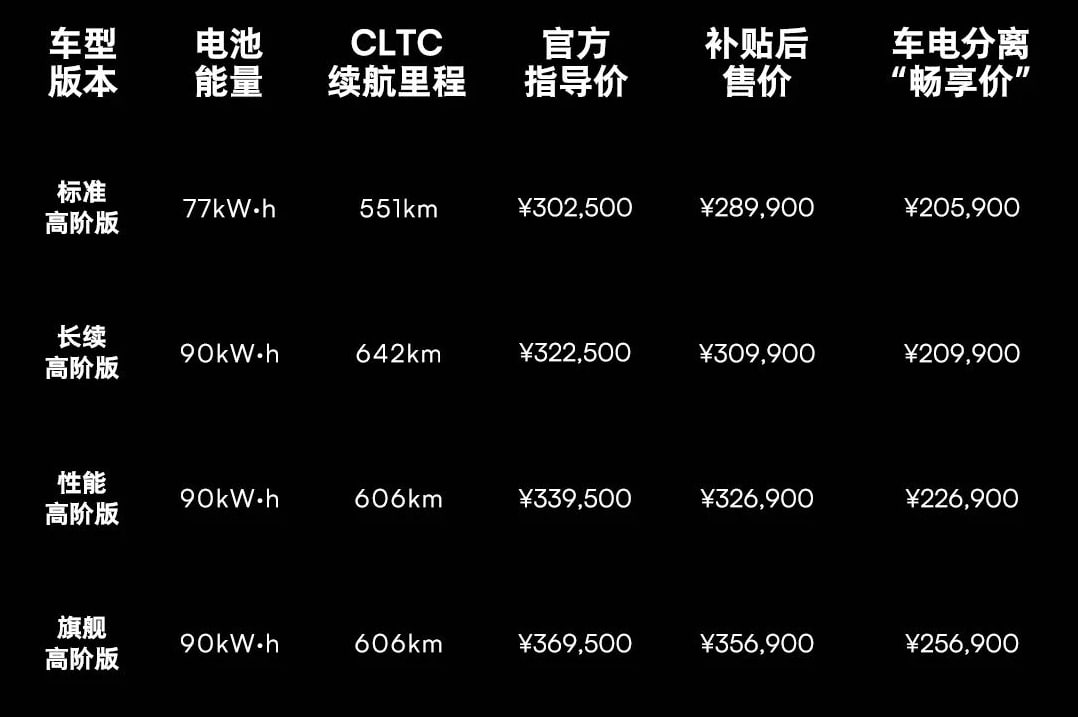 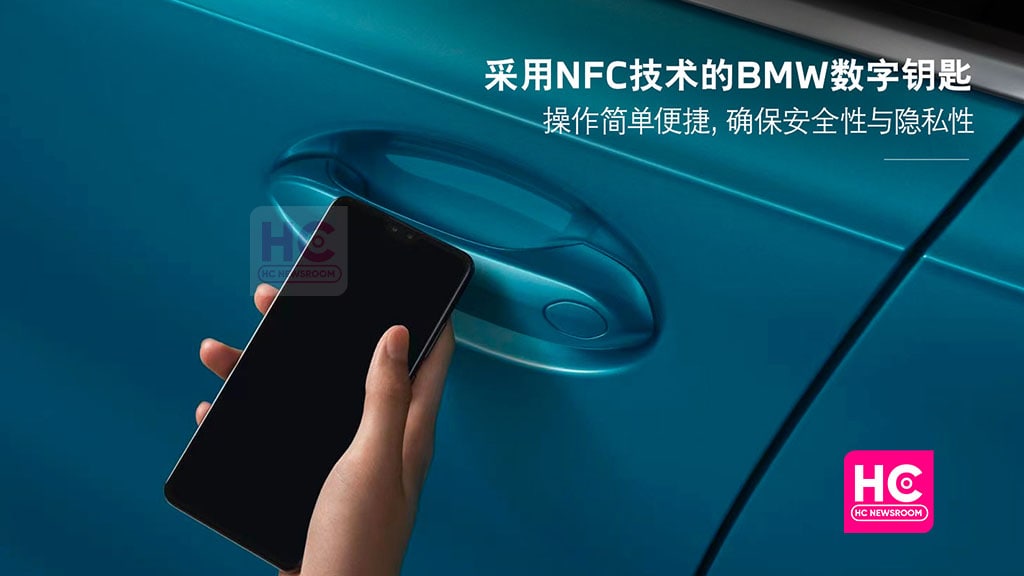 Today, BMW Group of automobiles has shared some official as well as beneficial information. Finally, the company has decided to expand the BMW digital key feature to several mobile phone models including the Chinese tech giant – Huawei.

Up to this point, the auto company has brought the feature only on the massive Android and iOS platforms. But now, it’s time to stretch the roots of the respective function to more surface, and let everyone enjoy the benefits.

According to the information, BMW Group will introduce the digital key function to Huawei, Honor, Oppo, Vivo, Xiaomi, and other brands in November this year. Apart from the devices, the digital key also supports 10 BMW models, including the latest BMW 3 series, the new BMW 5 series, the pure electric BMW iX3, and more.

Concerned with the feature, the BMW digital key option is quite simple and easy to operate. As the name reflects, it usually works for opening the lock of the automation. All you have to do is, place the upper side of your phone close to the sensor on the driver’s side door handle.

Once the user completes the digital key activation, he/she won’t require the internet connection to unlock the door or start the vehicle. Besides, even the low battery of your handset won’t be able to affect the BMW digital key function.

As of the implementation, BMW digital key uses NFC technology (Near-field Communication). Additionally, it also incorporates hardware security and software regulations to toughen the protection of the BMW vehicles. Alongside this, it also takes care of the user’s data by adding security chips to cars and phones.

Apart from the NFC-oriented feature, the cooperation has also made efforts in launching the UWB (ultra-wideband technology) digital key. It’s a short-range digital radio tech that generally covers high-security scenarios. With such a feature, users can enter in their car without using their handsets.

The UWB function will mainly rely upon BMW iX. It allows the user to perform several functions. Further, it automatically shifts to the NFC mode when it enters the low power form.

A lot of things are waiting at the other end of this year, Let’s see what we get in our Huawei and other mobile devices. 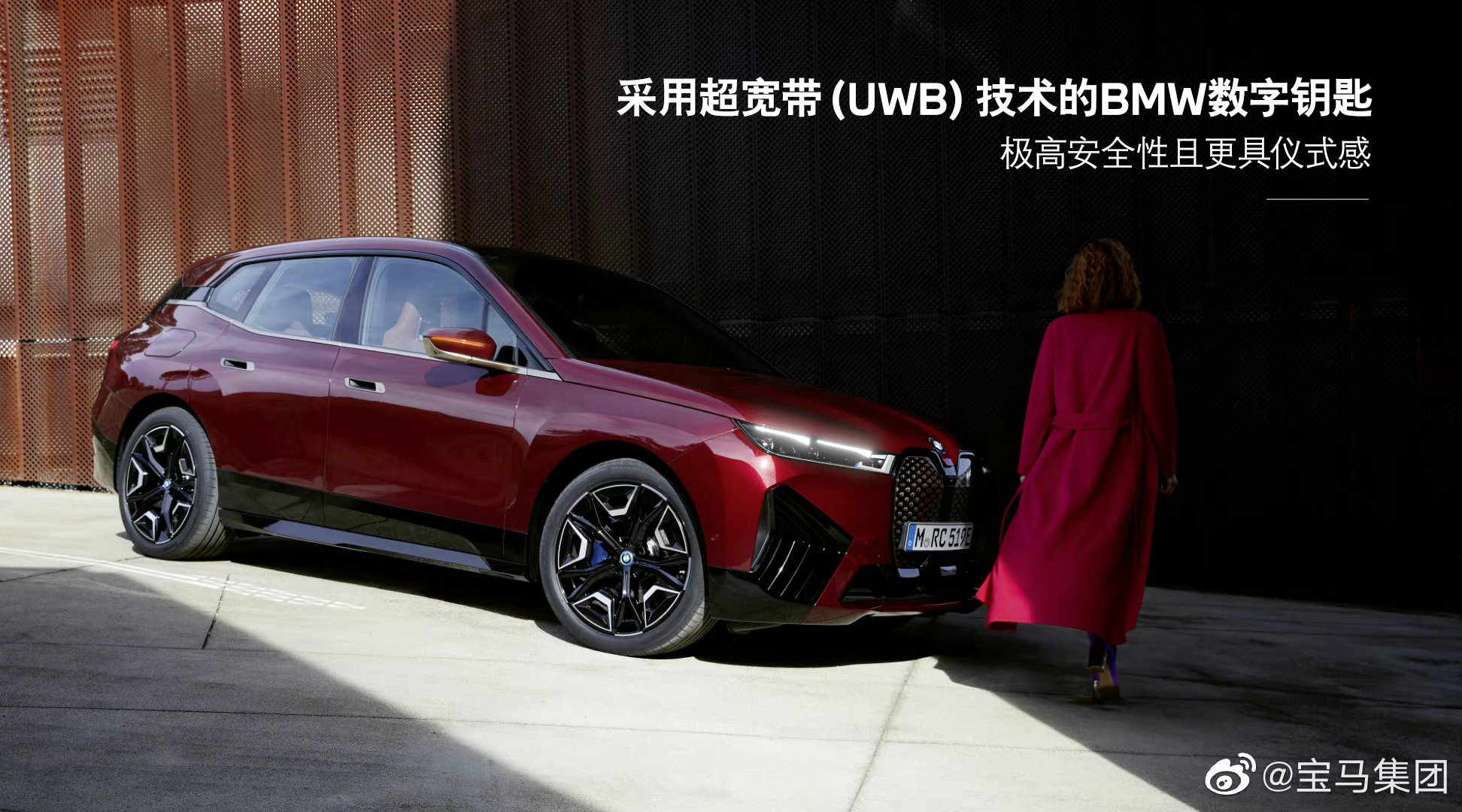 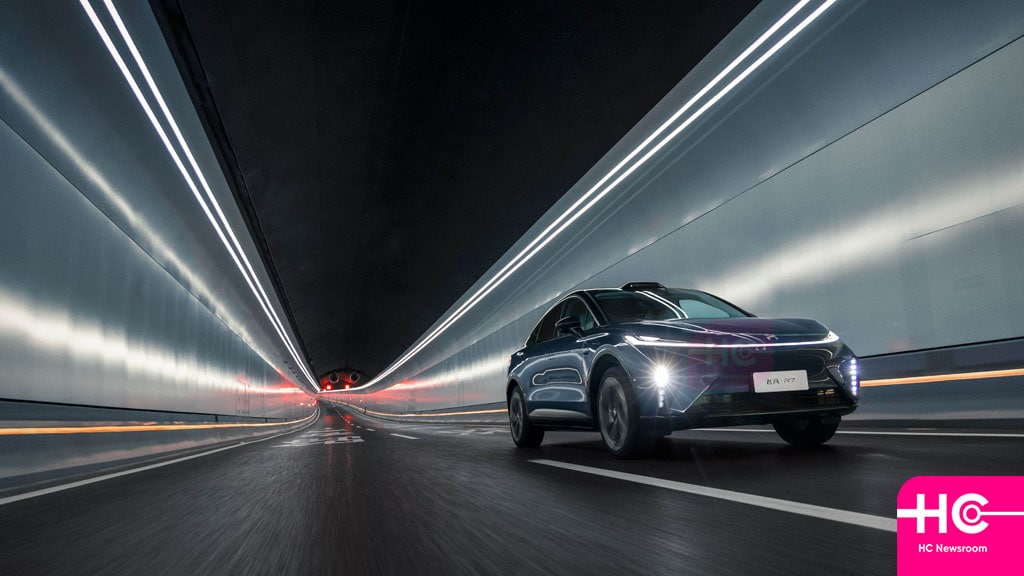 Huawei is familiar with providing car solutions across the globe. Day by Day, the demand for HarmonyOS or some other solutions is rising among auto cooperations. In the latest tweak, the SAIC brand is going to launch the world’s first Huawei AR-HUD-equipped Feifan R7 SUV model by the end of this month.

Before jumping onto the details of the device, let’s understand the main component of this agile device – the Huawei AR-HUD. Since it is one of the most advanced and tech-pack car solutions, it’s important to learn what this element will offer to automation.

The term AR-HUD indicates Augmented Reality Head-Up Display. Ultimately, the respective technology projects virtual images into the driver’s field of view (FOV). This action enables the person to keep their head up and remains focused on the road ahead.

The main function of the tech is to offer a fully secure and safe environment in the car. You can easily concentrate on the road without diverting the focus to other elements of the vehicle. All you have to do is feed all the information in the FOV. 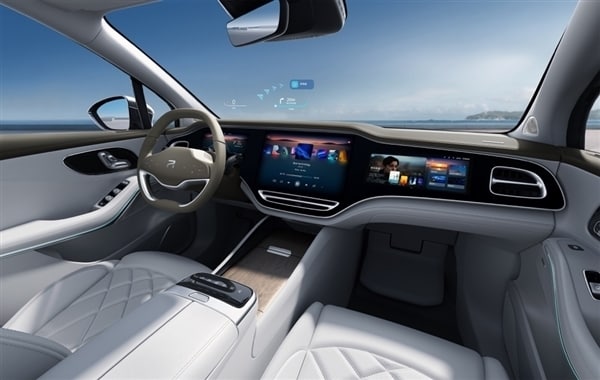 Speaking of the new model, the SAIC Feifan R7 equips the world’s first Huawei Vision Enhancement AR-HUD head-up system. Consequently, this builds up the RISING MAX 3+1 huge screen system. This system consists of a 15.05-inch AMOLED ultra-clear screen that delivers a 2.5K resolution, an 8155 chip, an instrument screen of 10.25-inch and a co-pilot screen of 12.3-inches.

As for the external part, the smart vehicle showcases a wide-format true color triple screen. Besides, it has two-wheel drive and four-wheel drive versions. It installs ternary lithium batteries with 77kWh and 90kWh capacity. In total, these batteries can cover more than 600km.

The intelligent vehicle furnishes a frameless induction electric switch door. On the other hand, the company has wrapped the front and back seats in NAPPA leather, making them more versatile and convenient for users. As per the info, the car will take place on the ground by September 27 with a price of 250,000 yuan [35,919.02 USD]. 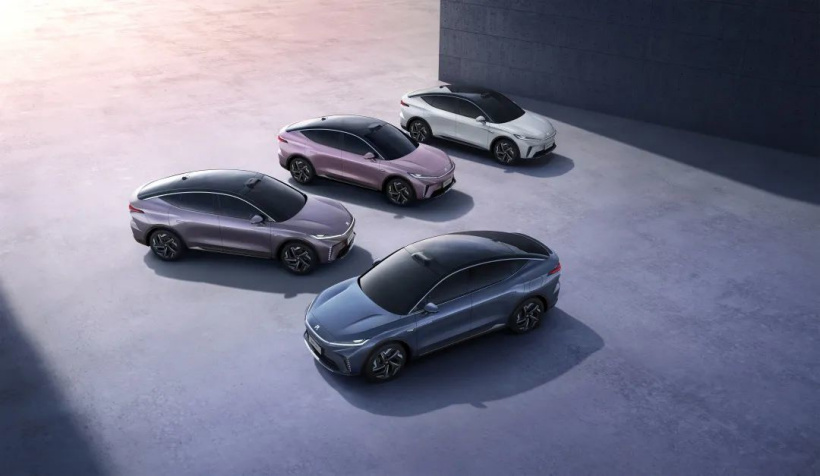