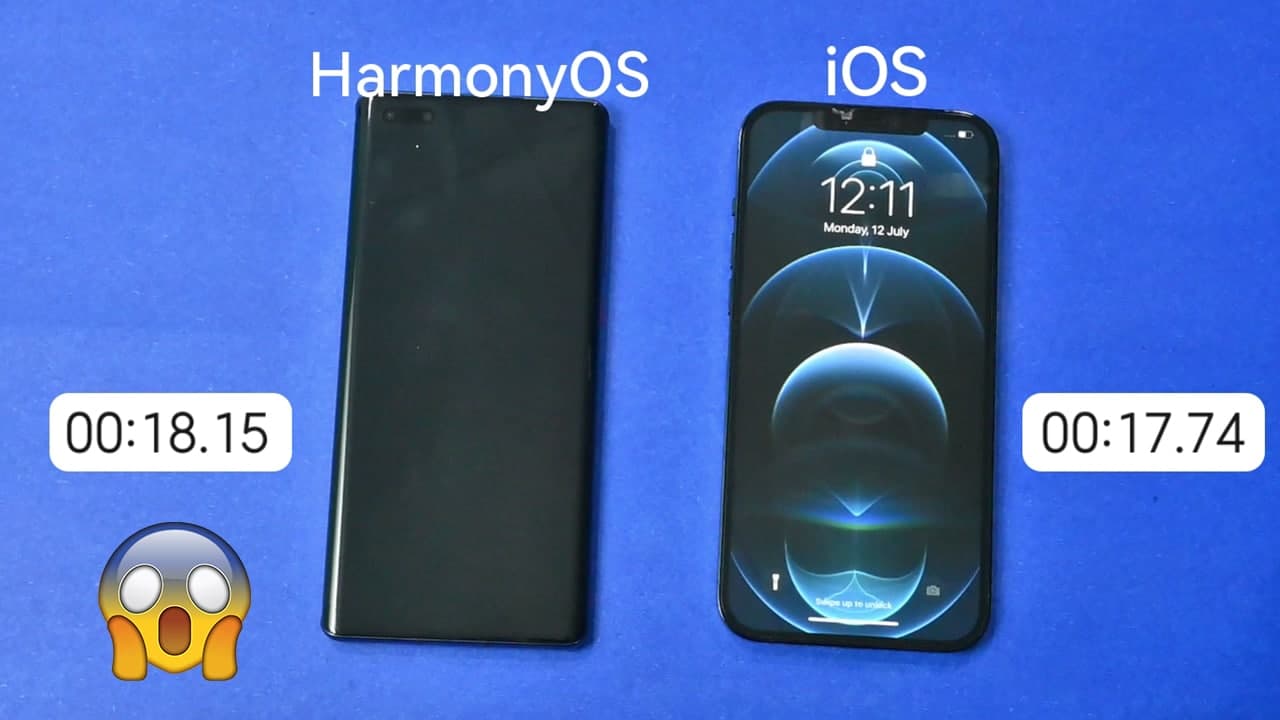 Apple has been one of the toughest competitors of Huawei, and its mobile operating system continues to get new improvements and major upgrades every year to provide a better user experience.

Although, iOS 15 starts test under the beta version but the iOS 14 continued to rumble on the existing iPhones. Therefore, after conducting the dark mode comparison, it’s time that we put iOS 14 against HarmonyOS 2 in a boot speed test.

What we’ve found in the HarmonyOS 2 vs iOS 14 boot speed comparison?

iOS 14 prevails this test and becomes the device that boosts faster than any smartphone that we’ve tested so far.

Coming to the result, HarmonyOS 2 powered device boots at 23 seconds. On the other hand, the iPhone device with iOS 14 took only 17 seconds for the win.

Still, HarmonyOS 2 is in the early stages of development and Huawei can improve it further with good optimizations.

Enjoy the HarmonyOS 2 vs iOS 14 boot speed comparison below. 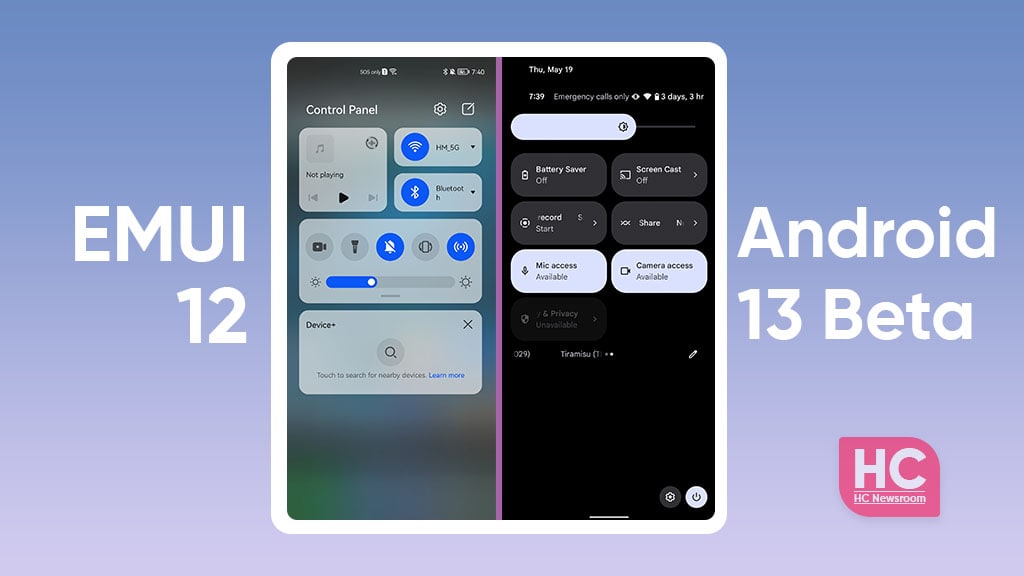 EMUI 12 is the latest software installment from Huawei, and Google is currently testing Android 13 as the newest edition on board. So, it’s a good time to compare EMUI 12 with Android 13 beta in terms of quick settings and control panel settings for both of these software systems. For your information, this setting brings you system settings management in one place performing various tasks with just a tap on your phone’s screen instead of going into Settings and searching through entire screen options.

Below you can check the comparison between Android 13 Beta and EMUI 12 control panel vs quick settings head to head.

Android 13 brings you the tile system inherited from the Android 12, the animations have been smoothening a bit as compared to its predecessor and the brightness slider has been moved to the top rather than staying on the bottom. The tile system is ready for your large clicks and can be reordered from tile settings.

On the flip side, the quick settings also integrate settings and a power key, which is very essential for quick handling and removes the hassle of using a physical power key. 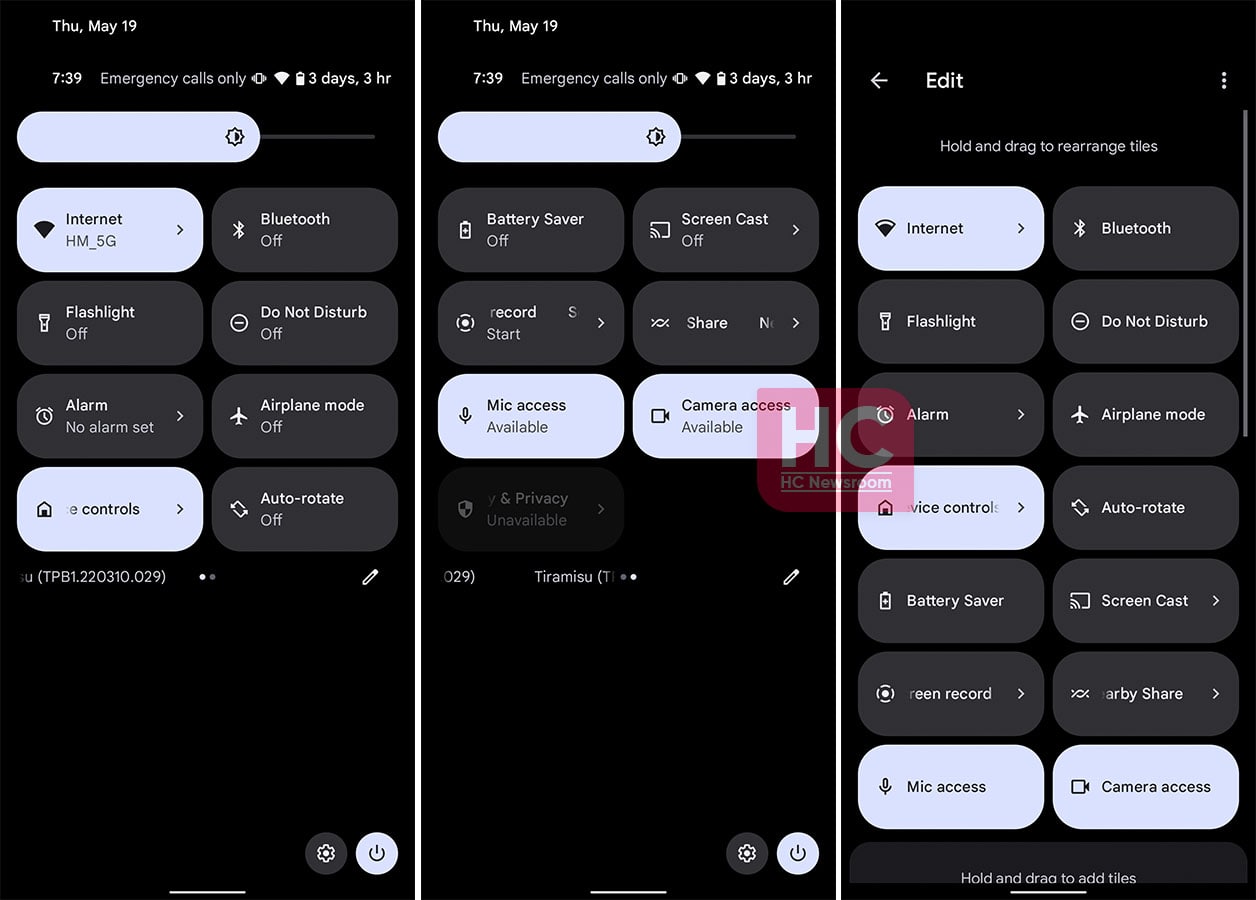 Coming to the EMUI 12, Huawei has designed the Control Panel to work as a multi-service hub. Once a user swipes down from the top right corner of the screen, the screen showcases various widgets and features including a music widget, network widget, quick settings panel, smart devices, and smart connected devices. 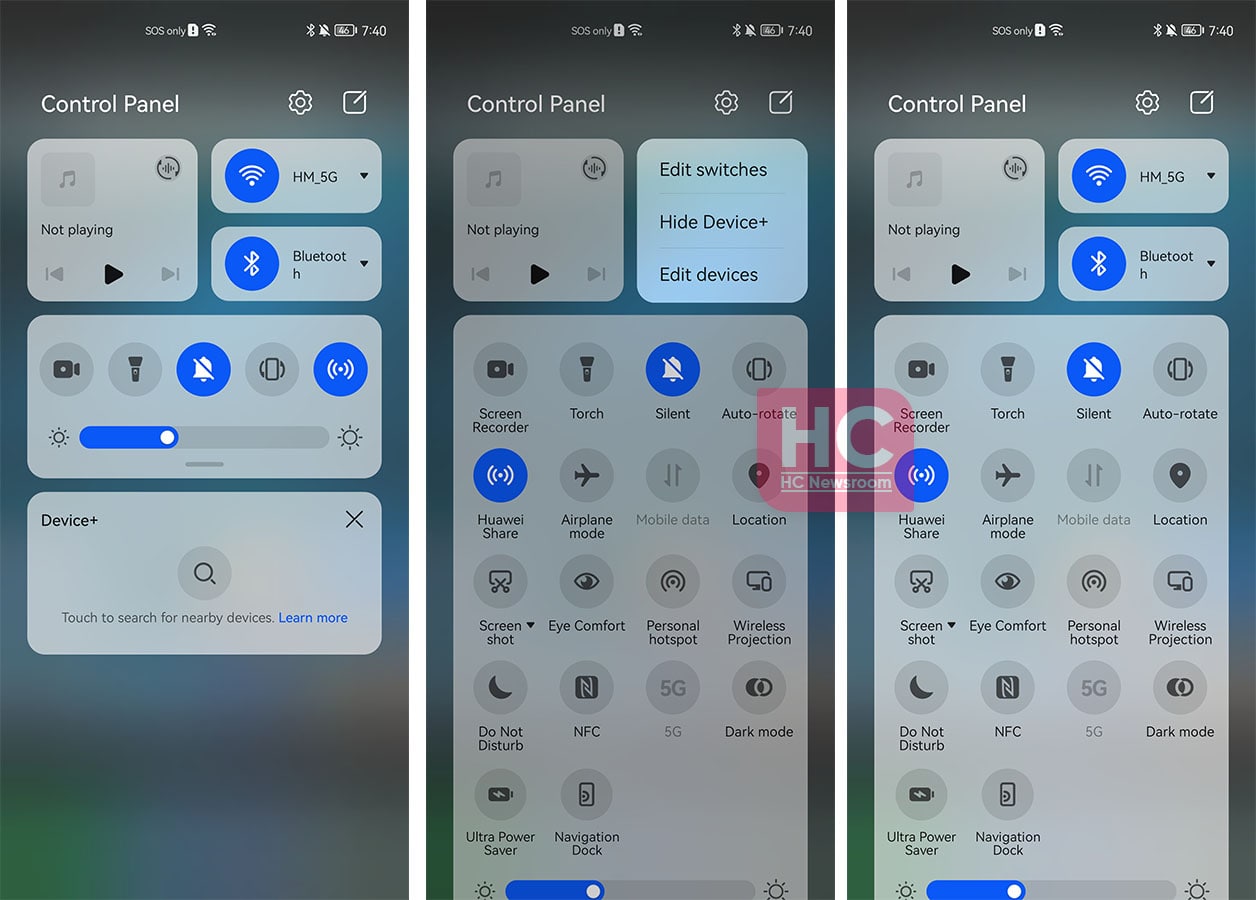 This is the most intriguing part of the EMUI 12 control panel, which allows you to manage multiple services without opening and searching through the Settings. Similar to other quick settings features, you can also edit and rearrange the order of the corresponding widget based on their available features.

Still, features such as a dynamic theme and a missing virtual power button could have become a big hit and increased the user experience of EMUI 12. 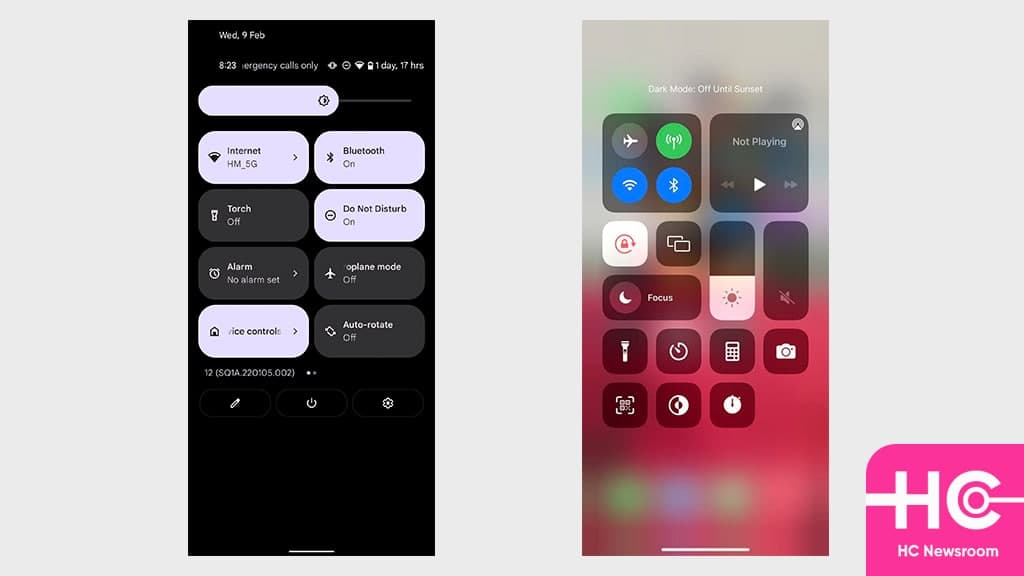 Android and iOS are the toughest competitors in the smartphone operating system world. One has the most users and the other draws second in the race. Therefore, you can expect healthy competition among them.

However, the latest version from both of these mobile operating systems – Android 12 and iOS 15 draws special attention from the consumers. However, a comparison between them could bring us a good standing point of what is changed over time with their latest versions.

Now, we seek to compare Android 12 and iOS 15 features, starting with quick settings that bring a lot of accessibility for the consumers. The quick setting helps you to get the most commonly used features with the access of your taps.

These tiles are editable and could be rearranged from one place to another. Aside from some general customizations, the new Android 12 has a Material You design that generates color pallets based on the wallpaper of your phone’s home screen.

These color palettes could apply throughout the user interface of your Android 12 smartphone on the system level. This customization feature is pretty awesome and really appreciatable.

iOS 15 on the other hand, keeps everything simple, the translucent background adds the perfect touch to the overall design of the icons on front. Switch icons are arranged in justified sections for each feature.

In comparison to Android 12, iOS 15 quick settings you get the most done on the same screen without grabbing extra space. On the other hand, Android 12 dials are big and take a bit more space as compared to iOS 15. 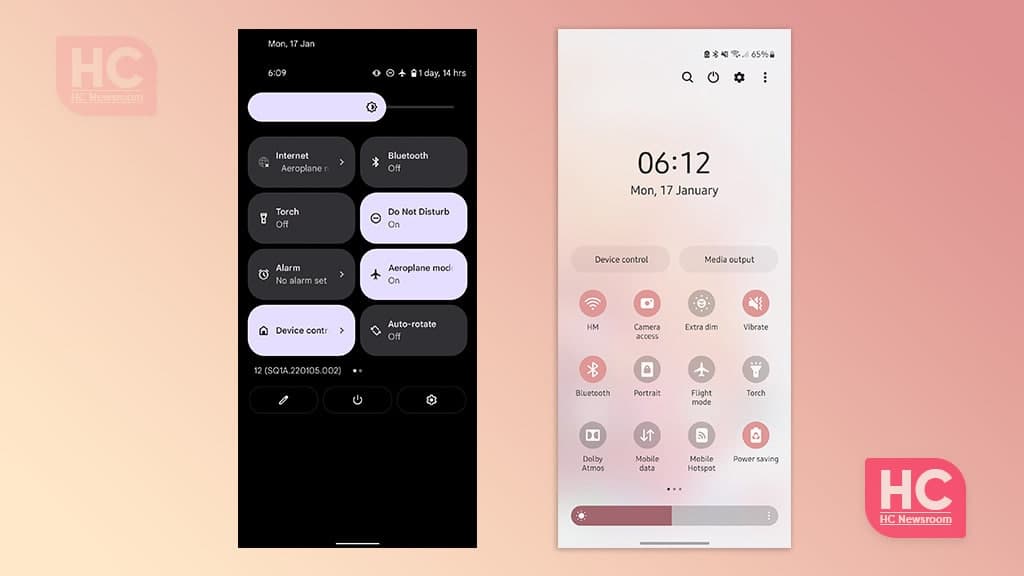 Last year, Google released its latest Android version – Android 12 that comes with various features and customizations. Different phone makers are adopting Android 12 including Samsung, the world’s largest phone maker. Though Google releases Android operating system upgrades but Samsung keeps them in a slightly steady manner with software updates that roll out on time.

Therefore, a healthy comparison between One UI 4.0 and Android 12 is a must-to-do task and we’re ready to perform it. For your information, Samsung One UI 4.0 has a lot of new customizations that make it one of the best customized Android mobile software. The latest version has new improvements for user interface, features, and UI customization such as a color palette that makes the user experience vivid.

On the other hand, Stock Android is an open space that has nothing to worry about the customizations, it’s just a simple plane Android that runs on Pixel devices and similar ones. But Stock Android 12 is something that you should check if you own a Pixel smartphone.

After these instructions, let’s begin our comparison saga between One UI 4.0 vs Stock Android 12 for the Quick Settings menu.

You need to swipe down to open the Android 12 quick Settings menu and access the quick access switches. As shown below, Samsung has brought in a new tiles system that will enhance the user experience. The tiles are big and easy to touch, so, there’s no chance of missing a tap. You can also customize the order and the tiles from the quick settings menu.

Furthermore, Android 12 will take care of your concerns over the customizations with its new Material You theme options that automatically generate a color pallet for primary and accent system UI colors based on your phone’s current home screen wallpaper. The Material You is something new and increases the looks and appearances efficiently without requiring the installation of any third-party plugin. 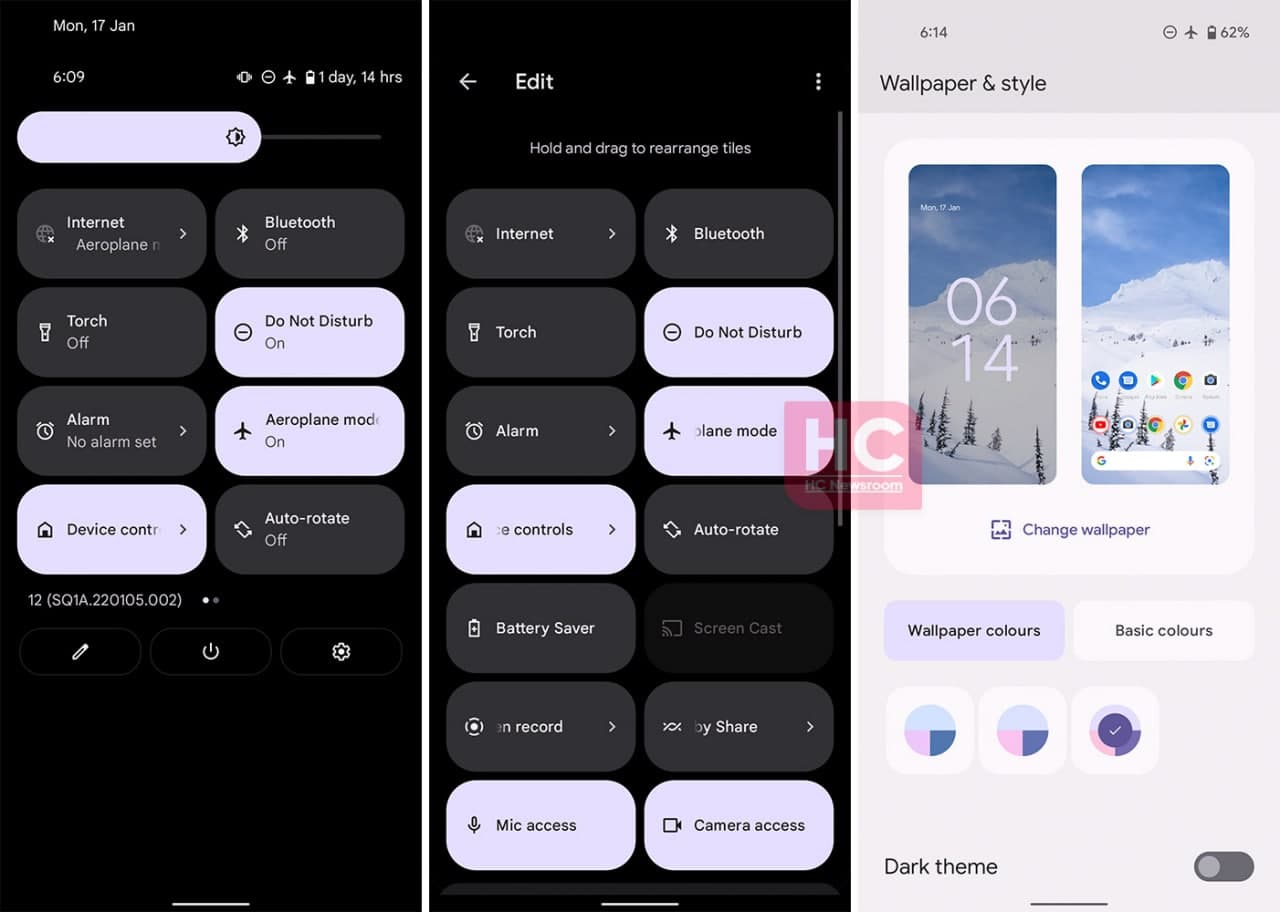 Samsung One UI 4.0 continues to carry a Quick setting layout from One UI 3.1, except the company has made minor tweaks in the arrangement of top labels and quick access icons are brighter and easy to spot. On the other hand, the brightness and sound sliders look better than before. The overall looks and feel of the user interface have been improved as compared to the One UI 3.1 software that does make a difference in user experience.

Don’t forget that One UI 4.0 comes with a new color palette feature that allows you to make some changes are the Material You since it’s also an Android 12 adaptation. 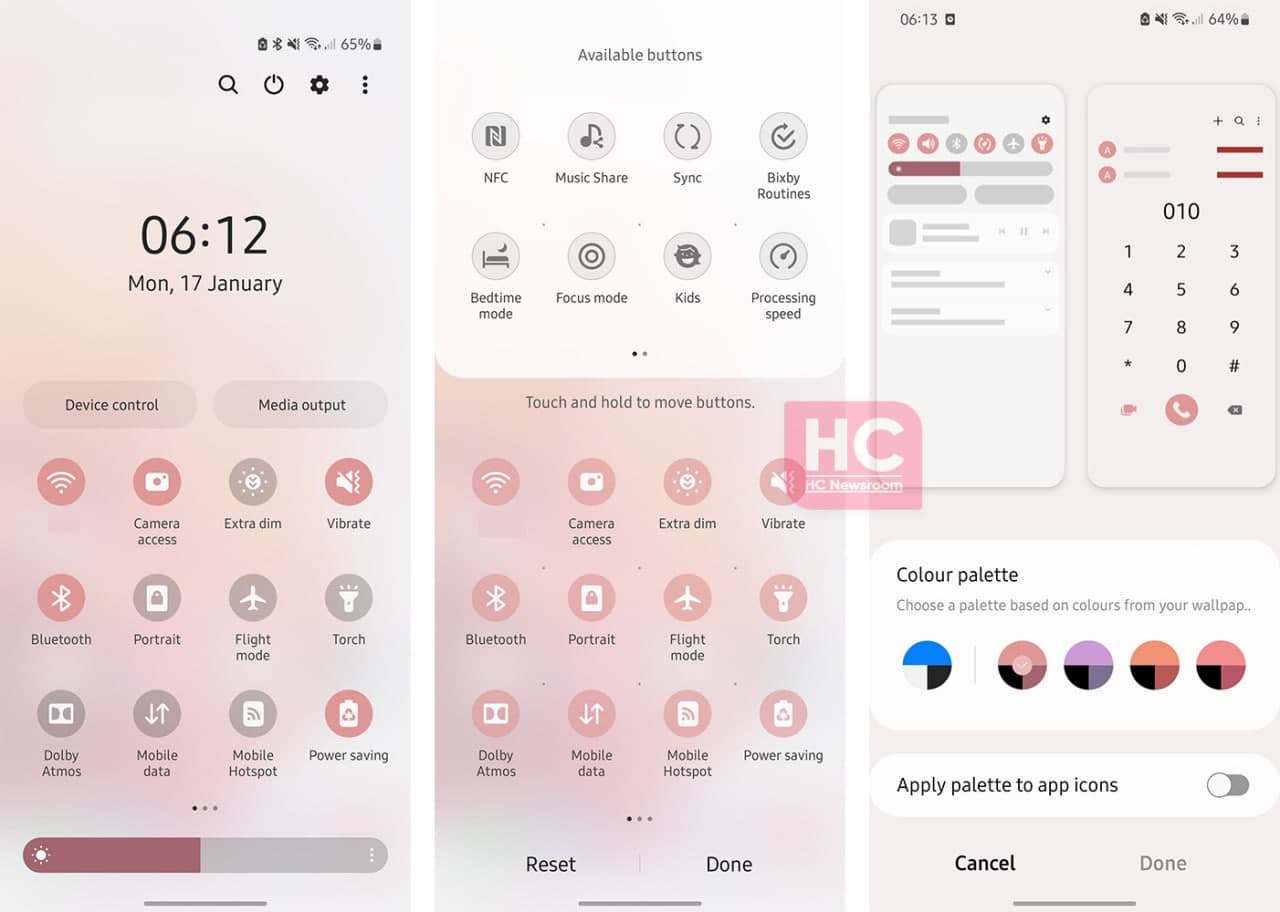 From a consumer‘s perspective, both of these quick settings user interface comes with lots of new options. However, the One UI 4.0 seems more friendly and easy to navigate as compared to the Android 12. Also, there are a lot of options that could show up on the One UI 4.0 screen view that may not appear on stock Android 12 quick settings.