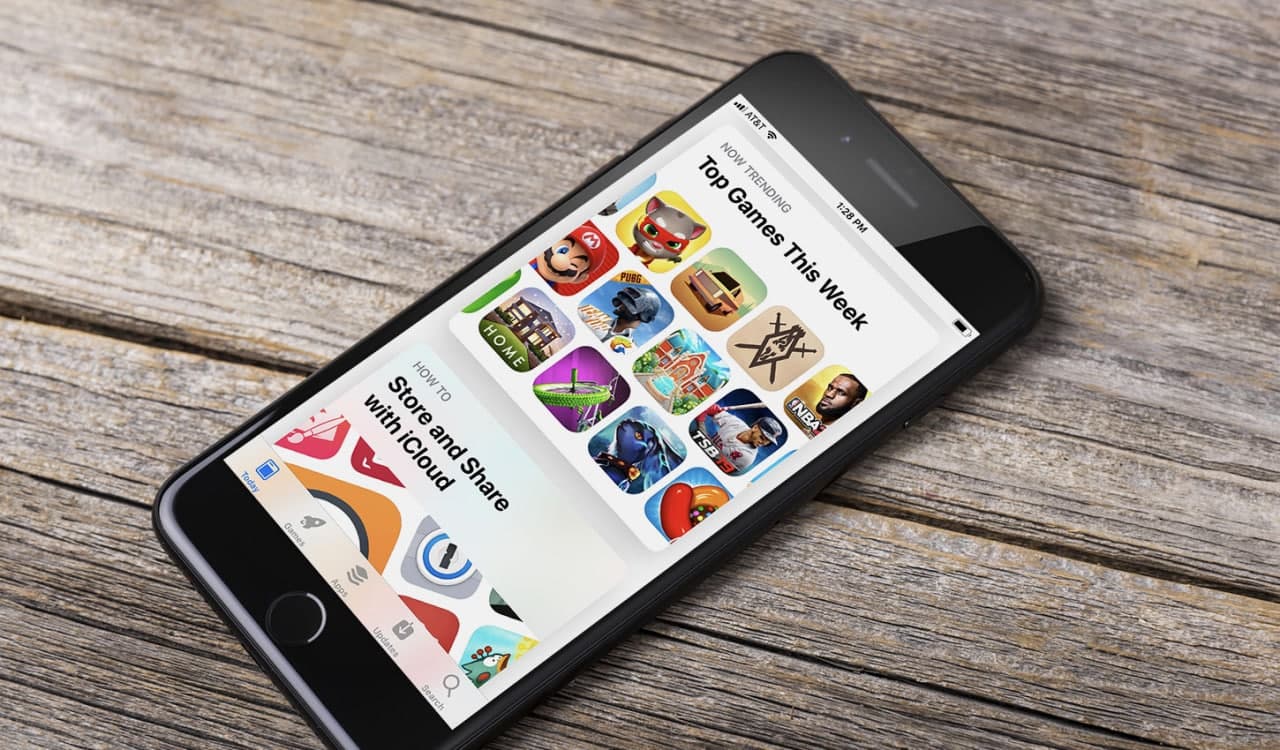 Furthermore, European spending accounted for 13.6% of global mobile app revenue for this year. It has exceeded over 33.7 billion dollars in comparison with the same quarter of last year.

However, this report is mainly divided into three parts- major sharer, top mobile applications, and top games in the European mobile app market. Users can check the full description here-

Where the App Store registered an increase of 20%, the Google Play Store’s YoY growth increased by 23.5%. 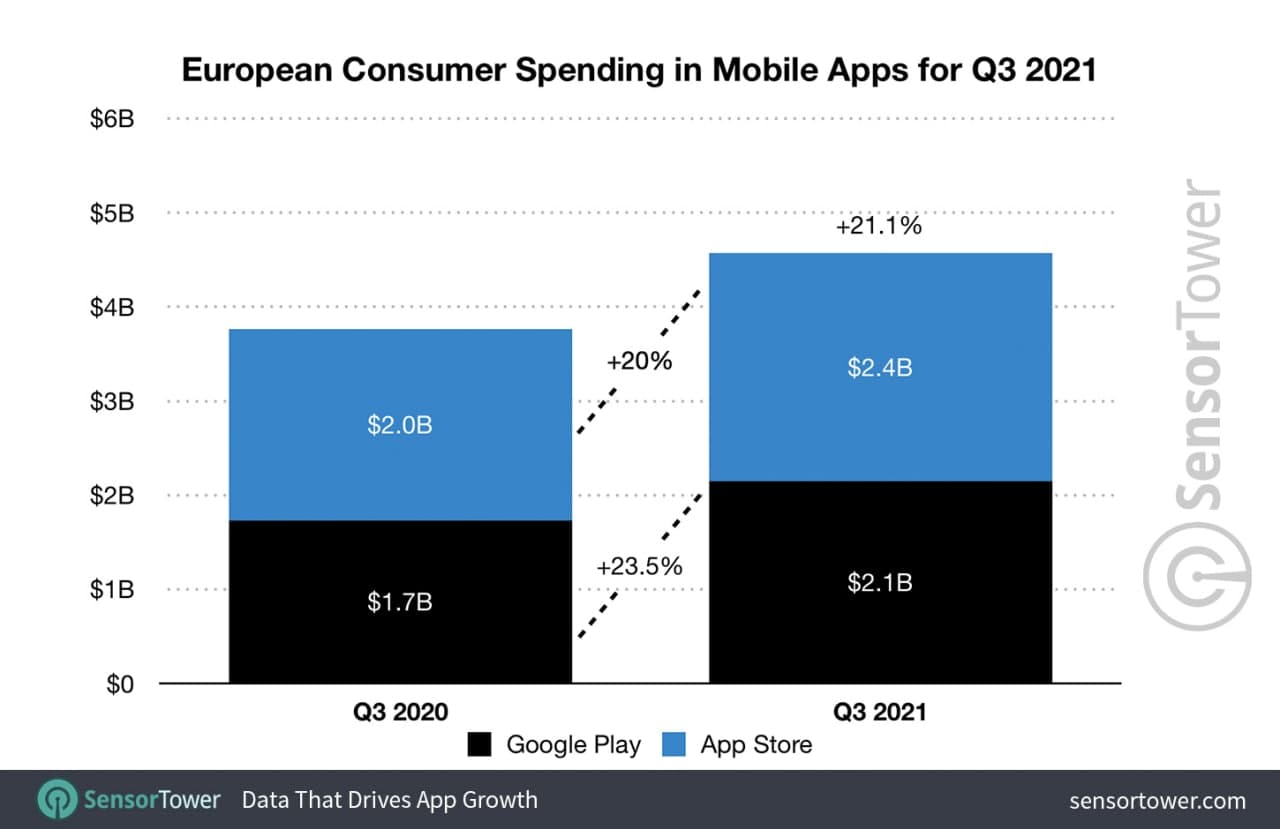 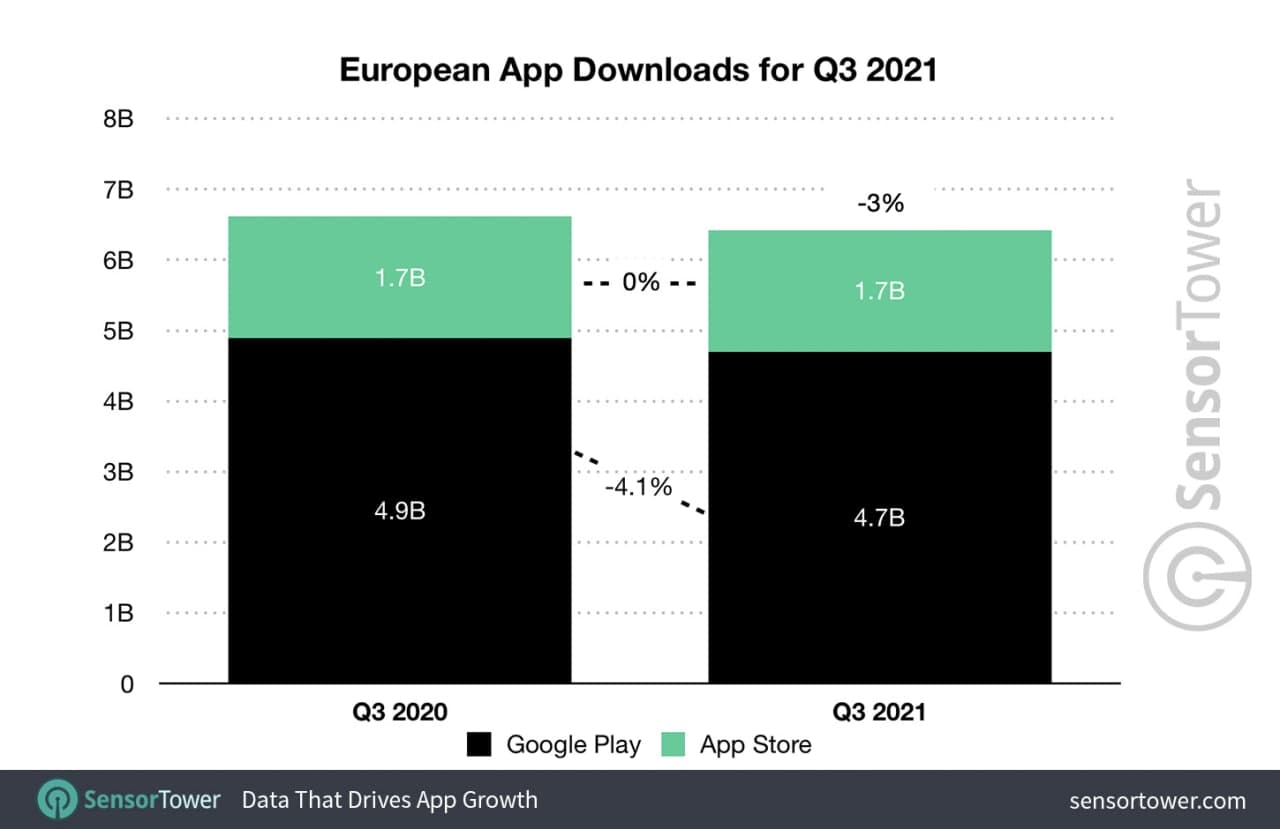 Moving to the individual countries, the U.K. took the bait with the largest share in App Store’s earning. Meanwhile, Google Play Store conquer the German market. Aside, PUBG Mobile, Garena Free Fire, and TikTok were all-time mobile applications for the users. 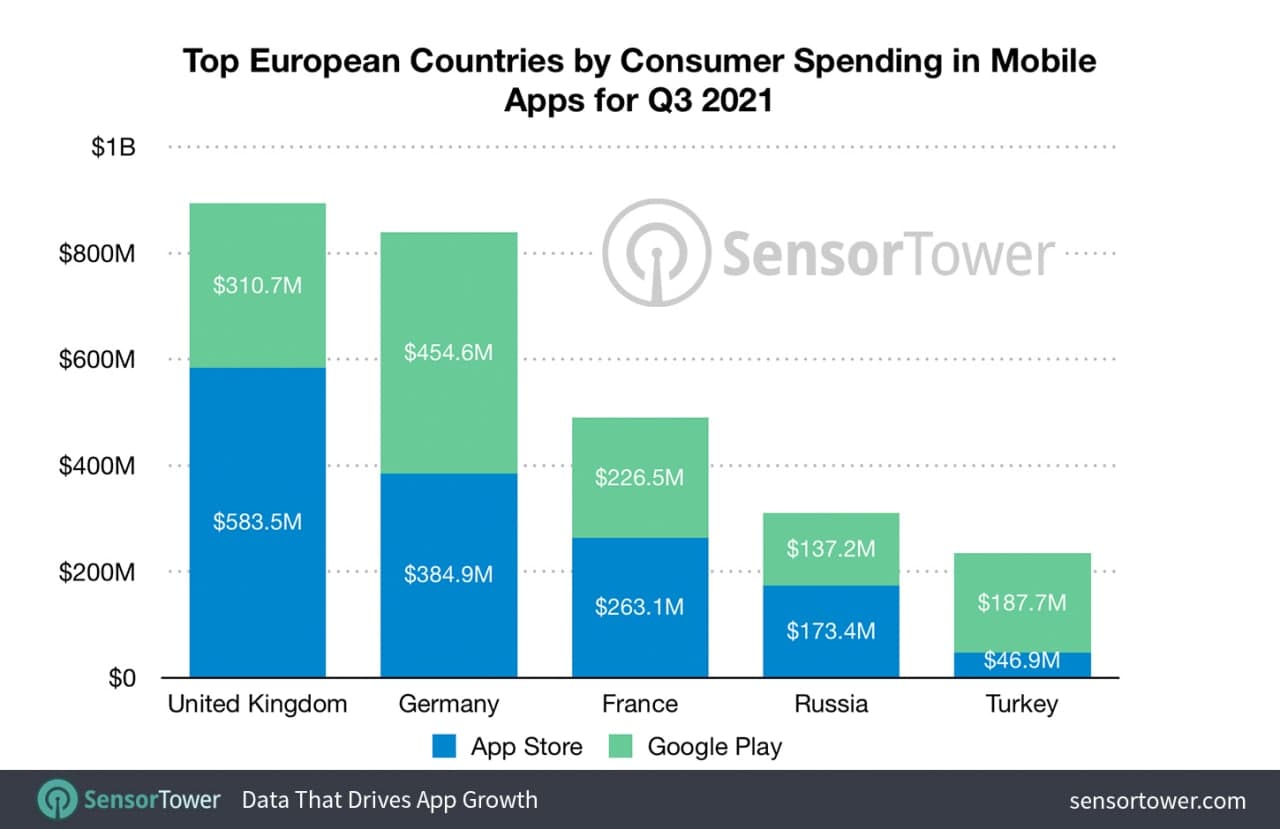 Speaking on the overall revenue for Q3 2021, Tinder, Disney Plus, YouTube, TikTok, and Google One makes to the top five. However, DAZN, Netflix, Twitch, Badoo, and Azar further continue the list. In this line, Tinder and Google One grab the highest shares on App Store and Google Play Store. 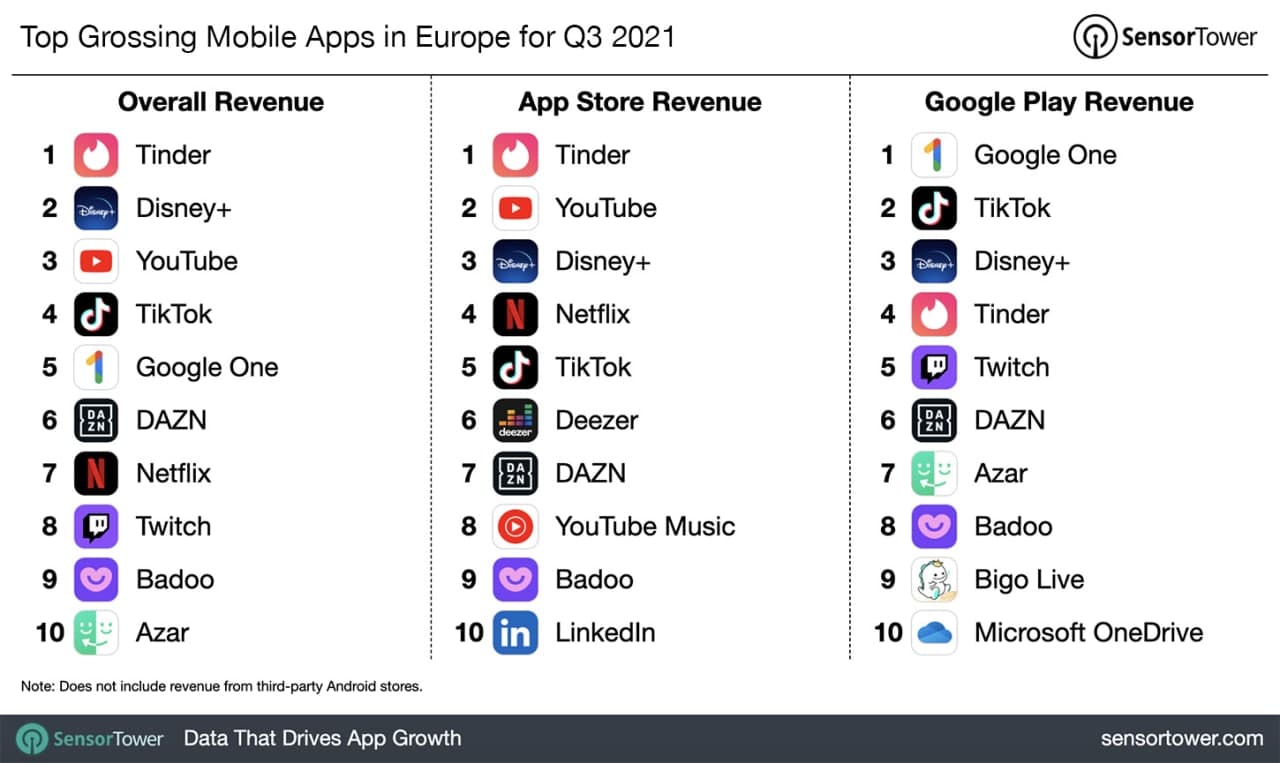 In Q3 2021, Europen consumers were fond of TikTok that recorded a total of 24.2 million installs, and tops the Google Play downloads list. As for the App Store downloads, WhatsApp has the most downloads with the second position on overall installs in the country.

Most interestingly the social media platform- Instagram, Telegram, Facebook, and Messenger has acquired the third, fourth, fifth, and sixth position. The list is further continued by SHEIN, Spotify, Snapchat, and Google Maps, in terms of overall downloads. 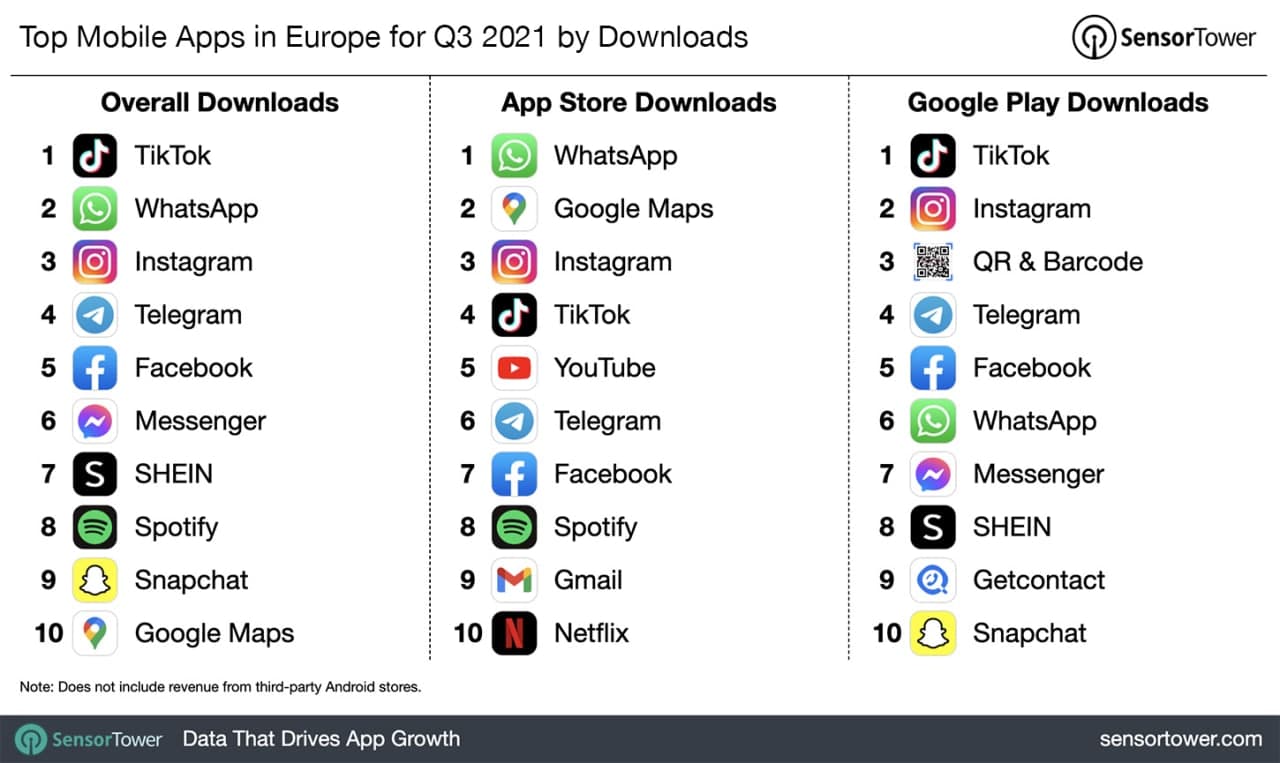 Coming to the gaming apps, the mobile games generated $2.8 billion in Europe during Q3 showing an annual increase of 16.7%. Google Play wins over the Apple App Store with $1.6 billion in consumer spendings.

Overall, Google Play represented 58.3 percent of total gaming revenue in Europe, while the App Store accounted for 41.7 percent. However, German users spend the most accounting for $366 million but Apple stores contributed $269.7 million in revenue with the user’s majority belonging to the UK. 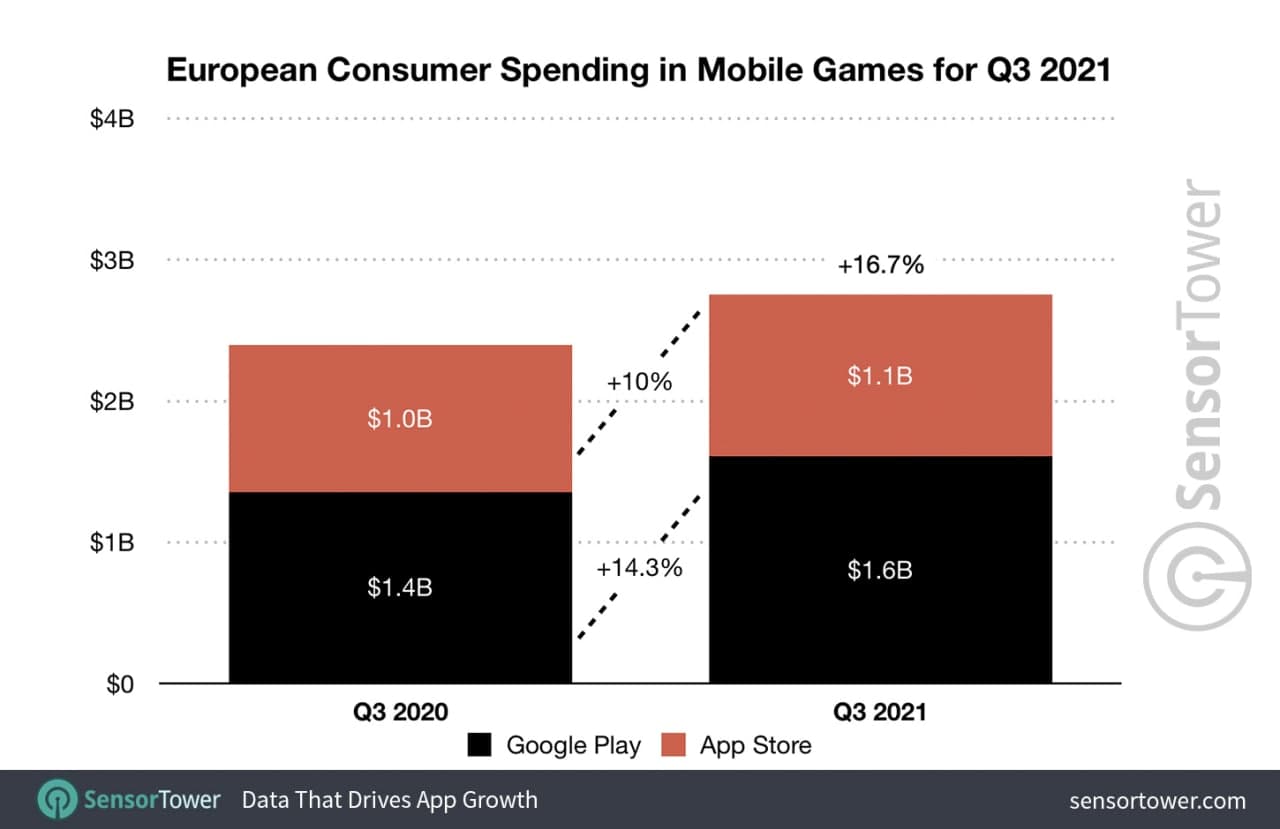 Still, Google Play remains unbothered in terms of downloads and successfully stands on 2.3 billion installs. Yet, the case isn’t the same with iPhone applications. App Store’s downloads decreased by 9% from 536 million to 488.4 million. 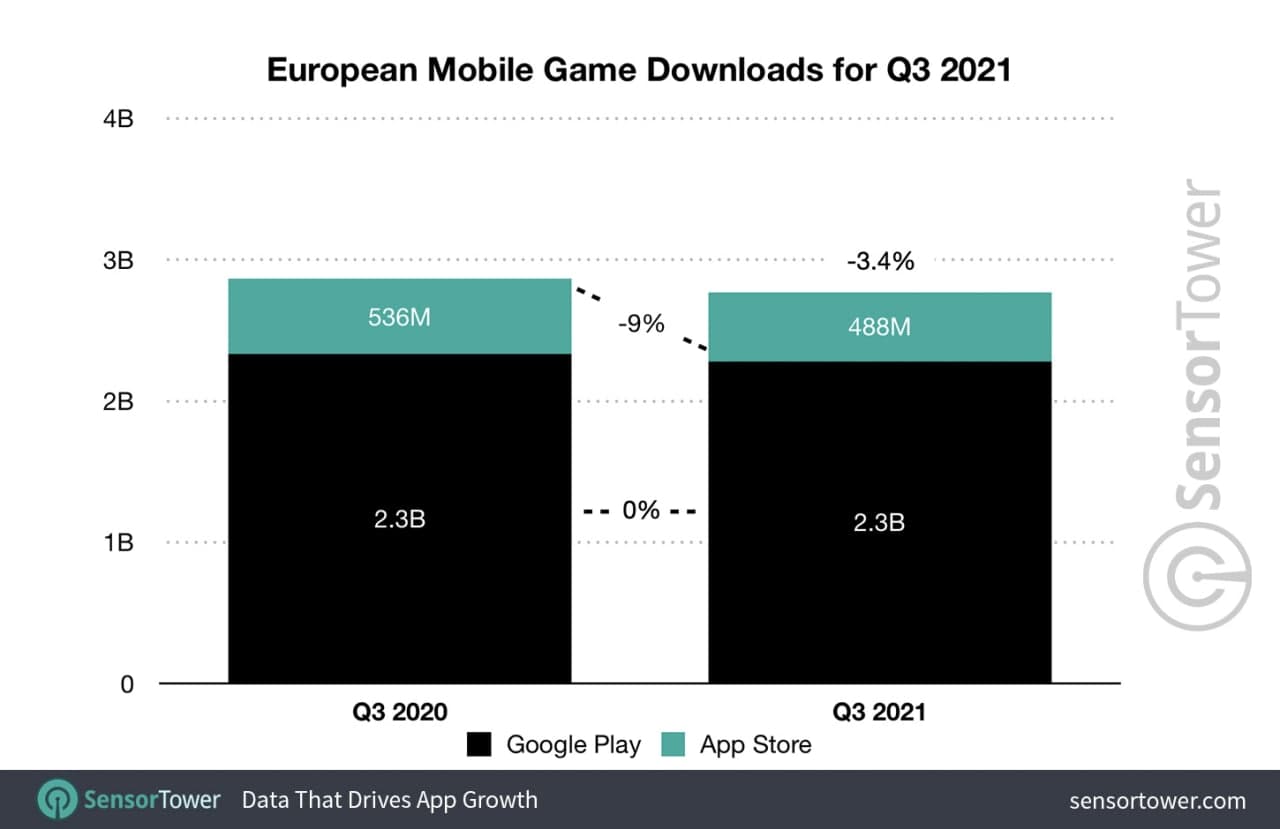 PUBG Mobile, and Coin Master from the Google Play revenue list, gained the most shares with first and second positions respectively. Furthermore, the top five include State of Survival, Roblox, and Pokemon GO in third, fourth, and fifth places. 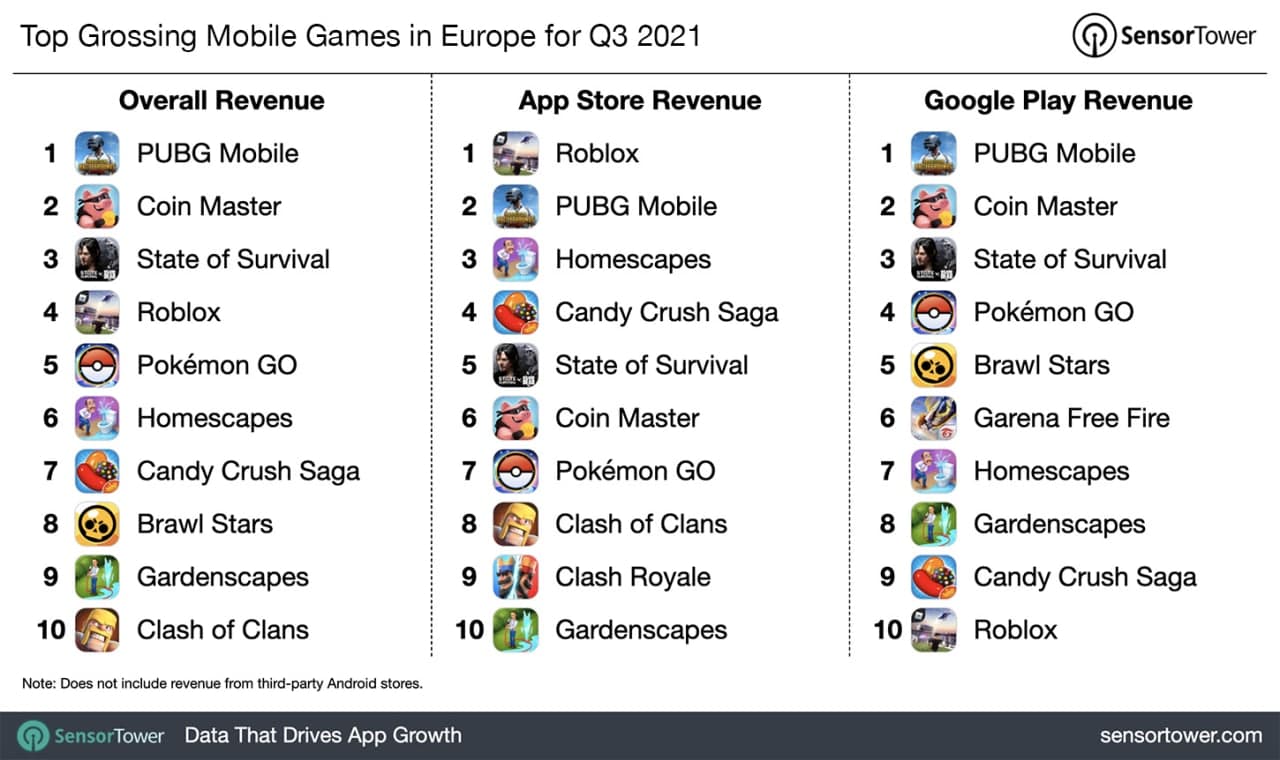 As for the game download lists, Count Masters, Fidget Toys Trading, My Talking Angela 2, Judgment Day, and Roblox obtained the top five positions. Surprisingly, the recently released is able to make it to the nine place Pokemon Unite in the overall downloads list. 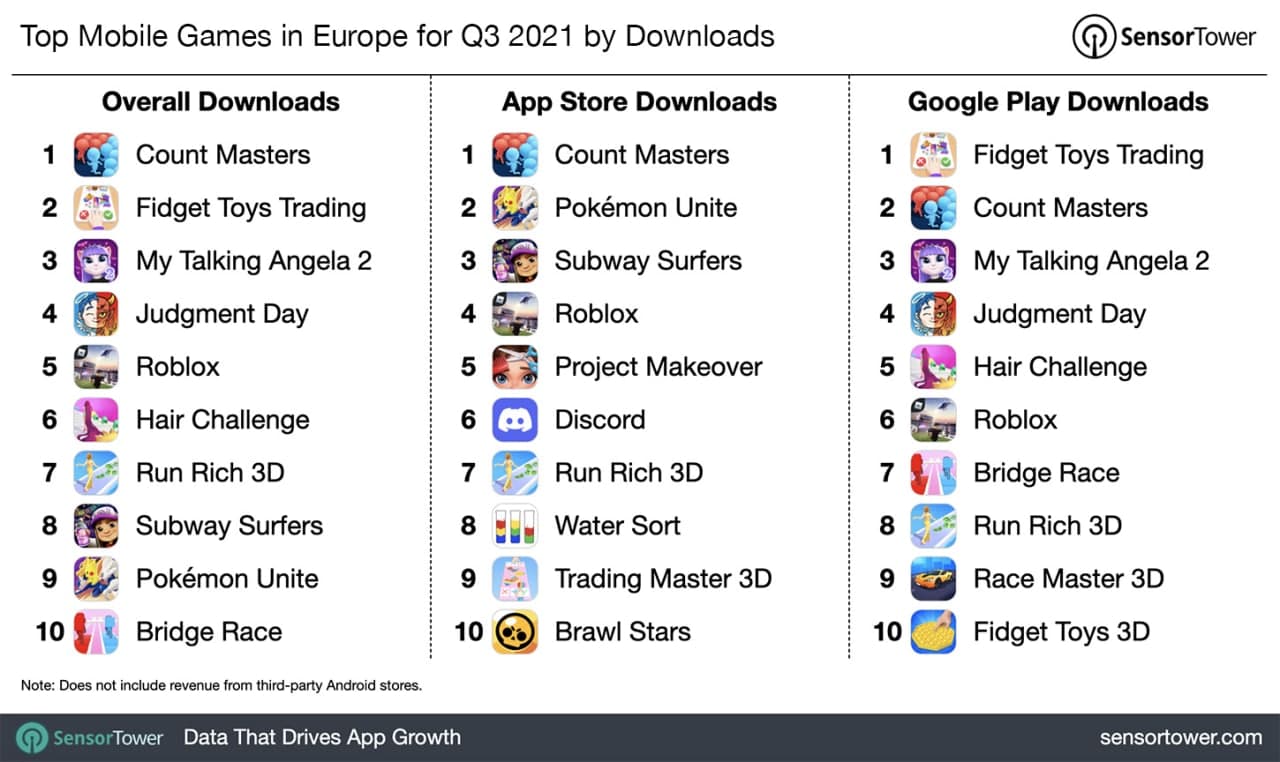 Google, Android, Samsung, and all VS Apple: RCS #GetTheMessage War 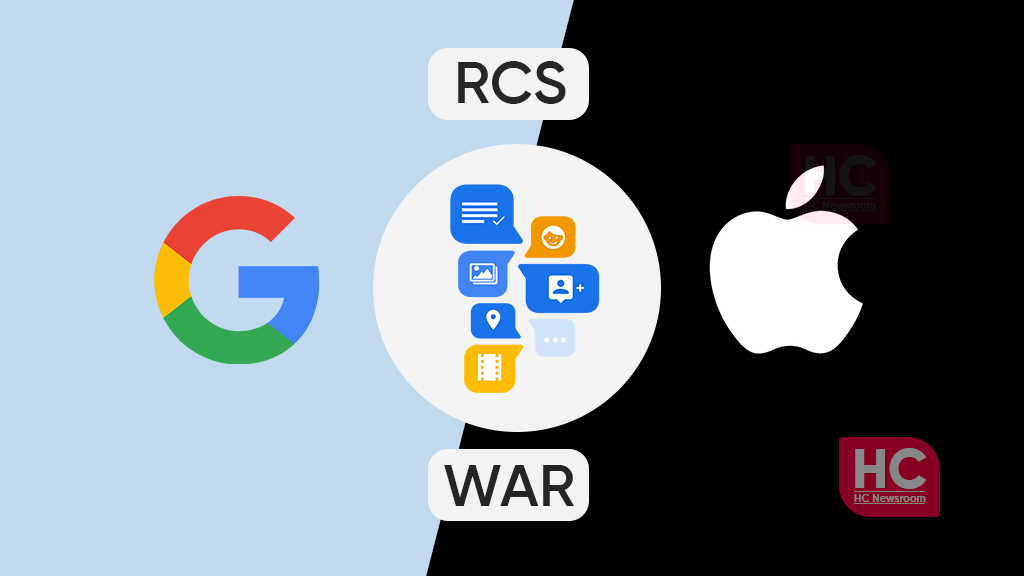 Google, Android, and Apple are constantly making their place in the hot topic headlines due to a common reason – RCS. Well, this term is in respect to something that Google has been forcing Apple for a long time. What’s so special about it? Let’s learn it in detail.

In this world of advanced and innovative technologies, users do not tend to rely upon old features. Whether we talk about the camera techniques, or the internal functioning of the devices, users now demand something that can be creative and reflective at the same time. That also applies to the texting features.

To give a new definition to the term texting or text communication, Google initiated RCS with the Android system. RCS, also known as Rich Communication Services is an upgraded form of traditional chatting.

RCS is a communication protocol, uprooted from the modern chat features that a user can impose on any social platform. Consequently, this feature allows the exchange of group chats, video, audio, high-res images, FaceTime, and other rich messaging function.

At present, Google is the one to offer the RCS chat feature worldwide with its Android system and even wants Apple to associate with this project. The company has even started a new campaign with the tagline – Get The Message, for Apple to adopt the feature.

Samsung – The leading supporter of RCS

Notably, after Google, the manufacturer that has supported the RCS functionality the most is Samsung. The Korean tech maker has enabled the RCS in its devices and commercially launched them in 2012, initially in Europe, and then in the US in 2015.

Apart from Samsung, other manufacturers such as OnePlus, Oppo, and  Xiaomi are also on the way to bringing on this amazing service for their consumers.

RCS ALL THE WAY!

Google is constantly forging Apple to adopt this interesting feature. The company is bragging about the American manufacturer for so many months. Google believes that RCS is a major step towards the increment in the economy.

Eventually, the US tech giant is pushing off the function to those OEMs that comprise many devices and so as the users. As a result, the RCS will soon be available to many regions around the world, giving a good amount of profit to the company.

Although things are quite appropriate, Apple is not ready to accept the function of its iOS. As per the report, the American company believes that their iOS system is quite secure and they don’t want to open it for unnecessary elements.

Moreover, the company has a mindset that it could harm the privacy and security of its users. Hence, Apple is the least interested one to apply the RCS functions to its consumers. Still, things are not in clear words, but we will keep updating you on this aspect. 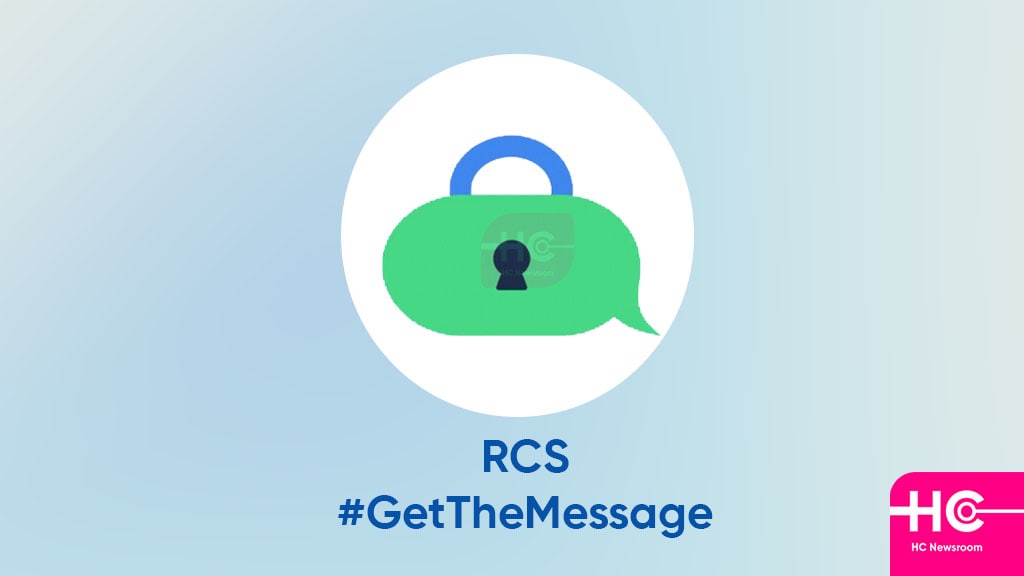 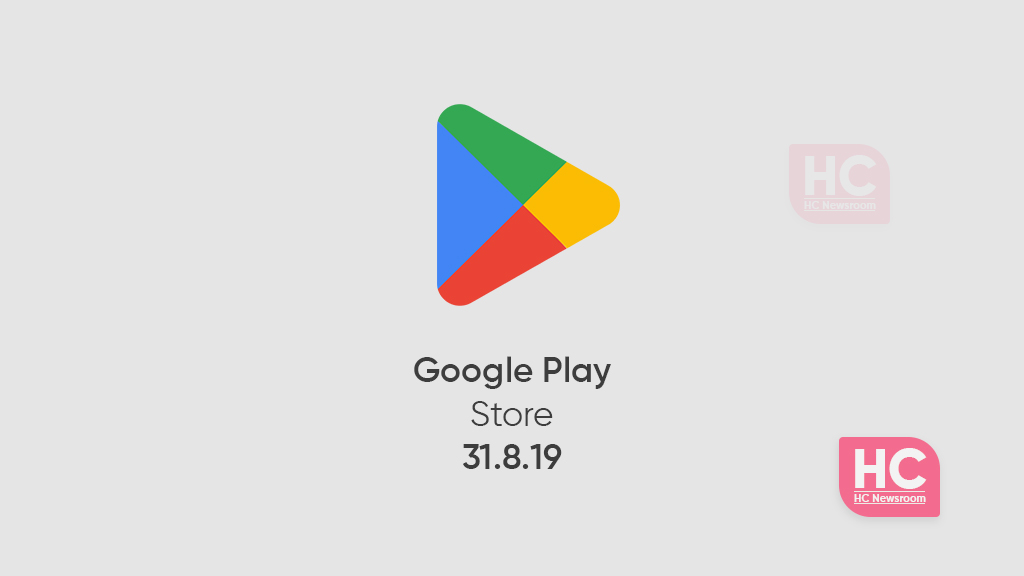 After a few days of a rollout, Google Play Store is seeding another version – 31.8.19 for Android smartphone users. Similar to previous versions, these updates continue to improve the stability and install new improvements the find related content.

It’s usual to see these Play Store updates that we never see downloading in the foreground and Google Play Store 31.8.19 will be installed on your device in the background. However, if you want to grab it firsthand, then visit APKmirror and grab the latest Play Store version (link).

Play Store, is an ultimate application market around the globe, it hosts most mobile applications and is top in rank, followed by Apple’s app store. However, Huawei is also in the race at third.

Every year, Android users download apps worth billions of installations as this digital market not only offers games and apps but there’s also plenty of entertainment content.

To protect all of its Android users and save the interest of developers, Google updates its Play Store policy regularly to curb misinformation, impersonation, and other sensitive matters, as it has done this month.

The company has taken some measures to improve user experience with new advertisement guidelines, content copy, and fake impersonation as well as ease in active subscription cancellation. There’s also a major change made in the third-party data sharing, which won’t be allowed after November 1st. 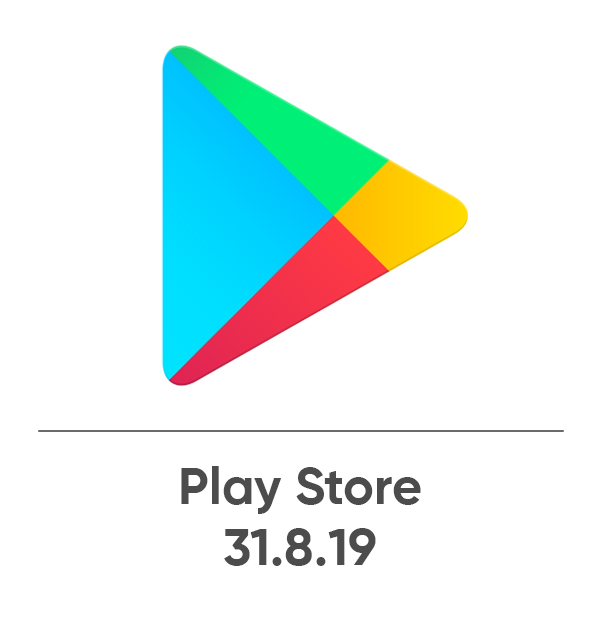