Despite the ban in the US, Huawei is already a big power in the field of network technology around the world and with the sum of investment it’s increasing, it seems like the company is planning to dominate the network industry for a long time.

According to a report from Bloomberg, Huawei has spent more around $15.3 billion on research last year. This figure is roughly a double of what the company has spent five years ago, a mark was only attained by Amazon Inc.

This is the effect of Huawei’s pursuit on the fifth-gen networking (5G) and related technologies. Also, the company is making a fast approaching to cover everything from mobile and cloud services to semiconductor and network equipment.

In terms of investment, Huawei trails the R&D budget of Amazon, Alphabet INc and Samsung, shows data compiled by Bloomberg. 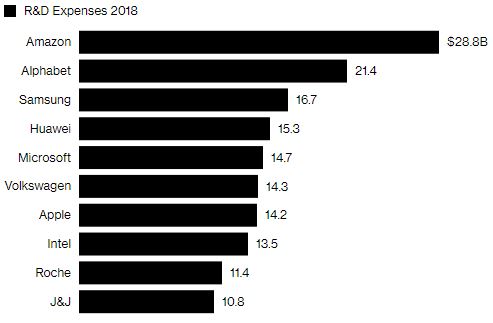 The report also shows that Huawei’s research budget grew 149 percent from 2014 outpacing increase by Apple Inc, Microsoft Corp and technology rival Samsung over the same period. While Amazon’s 210 percent growth in R&D expenditure was the only bigger rise among the top R&D spenders. 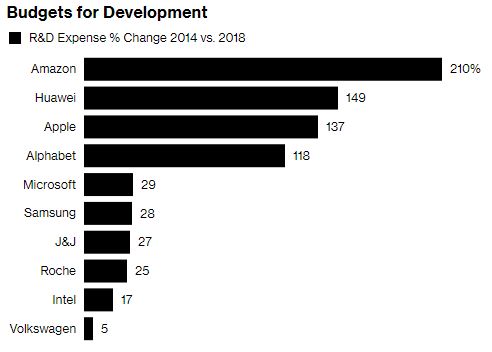 “All the business achievements Huawei has made should be credited to the company’s handsome R&D investment budget,” said Xiang Ligang, a telecoms consultant and chairman of industry website cctime.com.

“It has significantly boosted the company’s competitiveness,” he added.

By seeing these results it can be said that the Chinese tech giant is making a significant improvement in its R&D programs for the technology advancements. And it’s fair to say that the company will soon provide solutions covering every aspect of our daily lives.